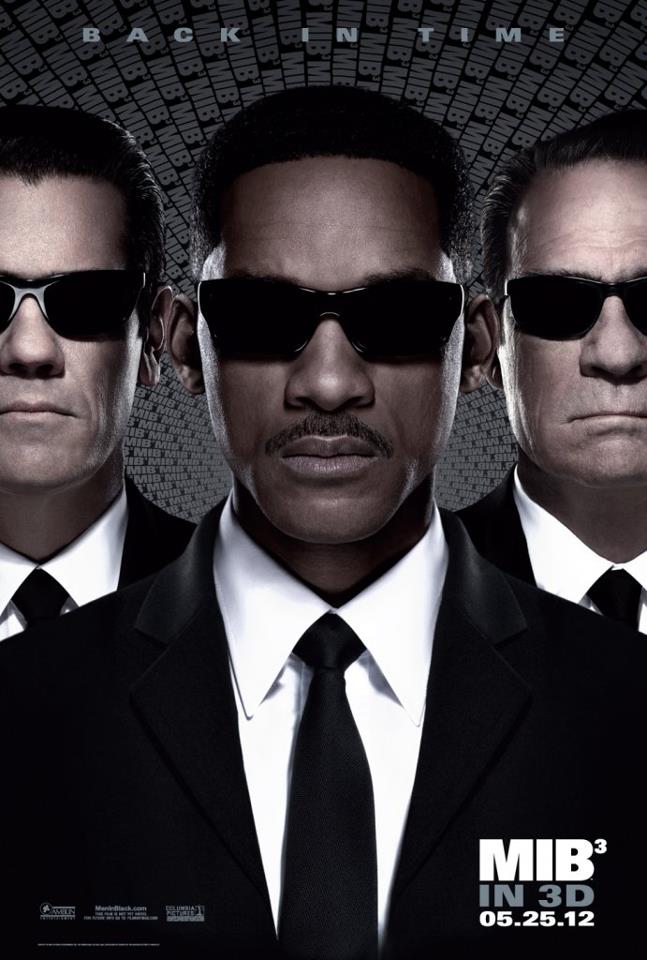 Men In Black 3 is the third film in the Men In Black movie franchise based off the comic book series published by Aircel comics (later Marvel comics) with a few alterations to the premise. Rather than going for a darker, murder all witnesses tone, the movies opt for a more ambivalent approach to extraterrestrial threats as well as showcasing almost parodious comedic elements.

Taking the premise of a secret government agency set in place to monitor and police alien threats and visitations to earth, The Men In Black are the team that handles these potential threats on a daily basis. The stories told within the movies follow the agents J and K and their investigations into alien activities.

The story in Men In Black 3 is one of comedy and time-travel. It follows the premise of having one of the organisations leading agents, Agent K, being removed from time by a time-travelling ex-alien convict with a grudge. With Agent K removed from his time-line, we can see which effects this has on his partner, Agent J’s, life on earth and with the MIB. 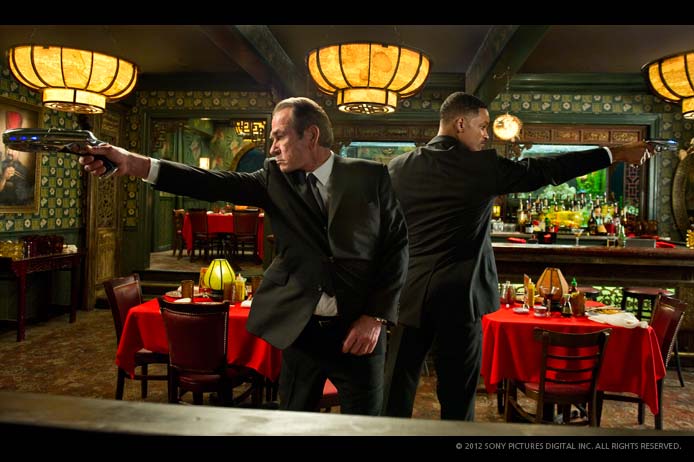 How would your life be affected by an event that suddenly saw someone that had a significant impact on your life being removed from a time since before you had even met? How would the people around you react? These, and more, are questions that the film takes on and appreciates throughout the story.

What I particularly enjoyed about this film was the way that it contrasted the life of the older Agent K of 2012 against the younger Agent K of 1969. Up until Agent J travels back in time, Agent K is shown as an emotionless old man who seems to be void of any human emotion whilst he is on a case, and is even less open while he is off one. This contrasts nicely against when After Agent J travels back in time and meets a younger Agent K who seems to be a little more into life than he was as an old man. This kind of character development is well played throughout the film by showing Agent J’s attitude towards him being comedically shocked at one point thanks to the differences. 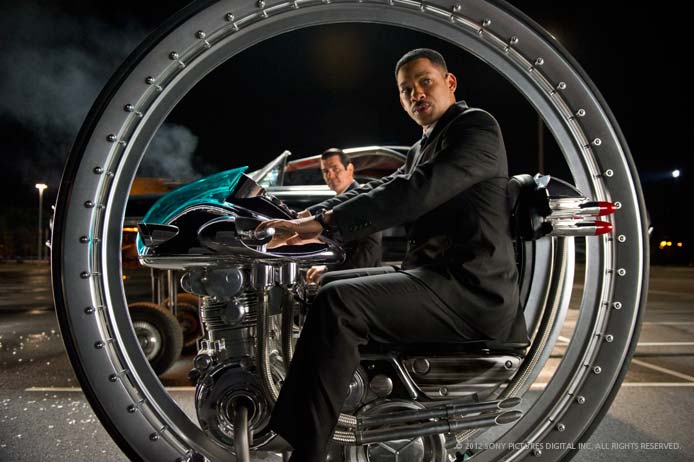 The storyline element of time-travel was one that I thought was played quite well in this film. One particular scene that I found to be quite memorable was one where Agent J is fighting a particular Alien and he purposely takes hits from the enemy in order to travel back in time and use that same sequence against it. This is something I would like to see in some more videogames and movies.

The story in Men In Black 3 is one that is certainly enjoyable and is often quite humourous. However, it does feel that it is a little quick, but I’m not sure if that’s out of enjoyment or a short running time.

Visually Men In Black 3 is a fairly amazing film. And what I mean by this is that it was bright, colourful and vibrant to look at, even while wearing 3D glasses which can often screw with the colours of a film.

What I found particularly respectable was that everything in the film felt very Men In Black. A fear that I had going in was that because of the time spent between movies, things may not have been redesigned as well which could have impacted on the films aesthetics. 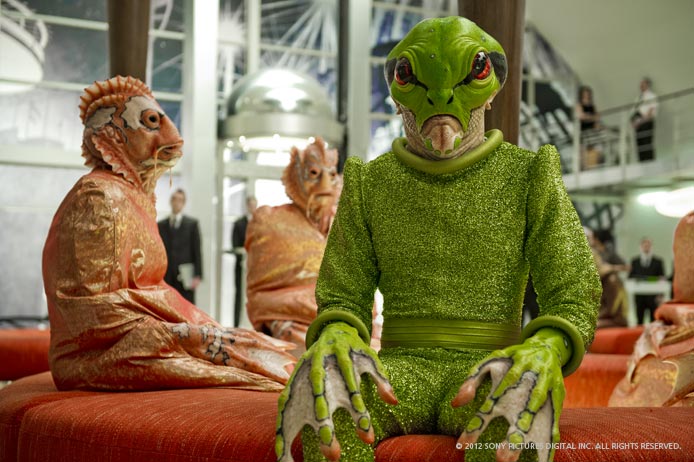 So what makes a Men In Black film aesthetically Men In Black? It’s gotta be the black suits, right? Sure that’s part of it, but maybe there’s more. How about that MIB control room and how it’s all white and far more technologically advanced than regular technology? Surely that’s a part of it. Shiny Alien weaponry with more power than 1000 suns? Those are there too. Aliens! Aliens are it aren’t they? Not entirely. The aesthetics of Men In Black encompass all of these things and more and it is something that the third movie got right. This film, visually speaking, felt just like a Men In Black film.

What a lot of people might notice with this film is a lot of the visual references to past events. Like, for instance, Agent J has a picture of Frank the dog alien thing above his bed and Agent K has an opening wall full of guns like the one seen it Men In Black 2. The movie is littered with throwbacks like these, particularly towards the start, and will stick out to anyone that has seen the first two movie recently. 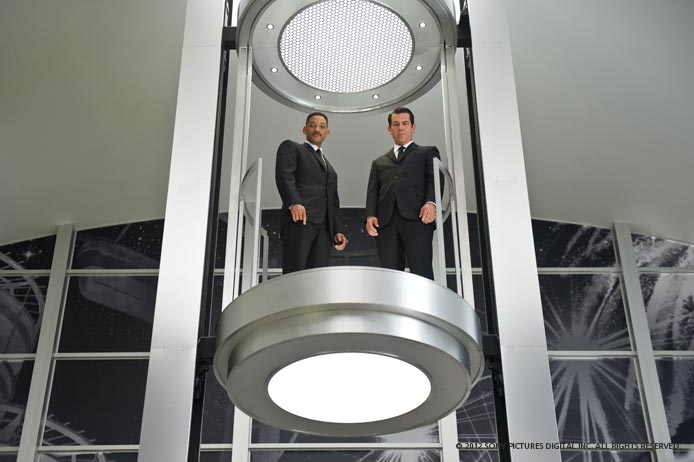 The last thing I want to talk about with the visuals is the additional 3D option. Sadly, like most 3D movies, the novelty wears off quite quickly and it feels like you’re just watching a regular film after a short while. Also, the 3D is never really fully utilised to its maximum effect. I’d say watch this in 3D if it’s available to you, but you’re not losing anything by going with the 2D option.

Audibly, Men In Black 3 is pretty good. making it’s return is the instantly recognisable Men In Black theme tune (not the song by Will Smith) in the movies score. I actually quite like the way they used the theme in this film, giving Agent J’s investigation an even more authentic feel.

Even better than the familiar score is the way everything in film sounds. The Aliens have their particular quirks, each weapon has it’s own sound and of course, the neuralyzer has it’s usual memory wiping sounds. I feel that if they had of changed any of these things, the movie would have lost that usual MIB charm and would have been the worse for it. What I absolutely loved about the film though, was the way audio was used as the basis for comedy within the film. A familiar scene is at the start when Agent O begins to quote an alien verbatim and begins garbldeygooking. It was so hilarious, the thunderous laughter said so.

Men In Black 3 is an entertaining film to watch that will not only keep you laughing, but will also keep you engaged in the story that spans multiple timelines. Nothing particular about this movie changes the franchise, but it does evolve it. Fans of the first two movies will absolutely love this film.