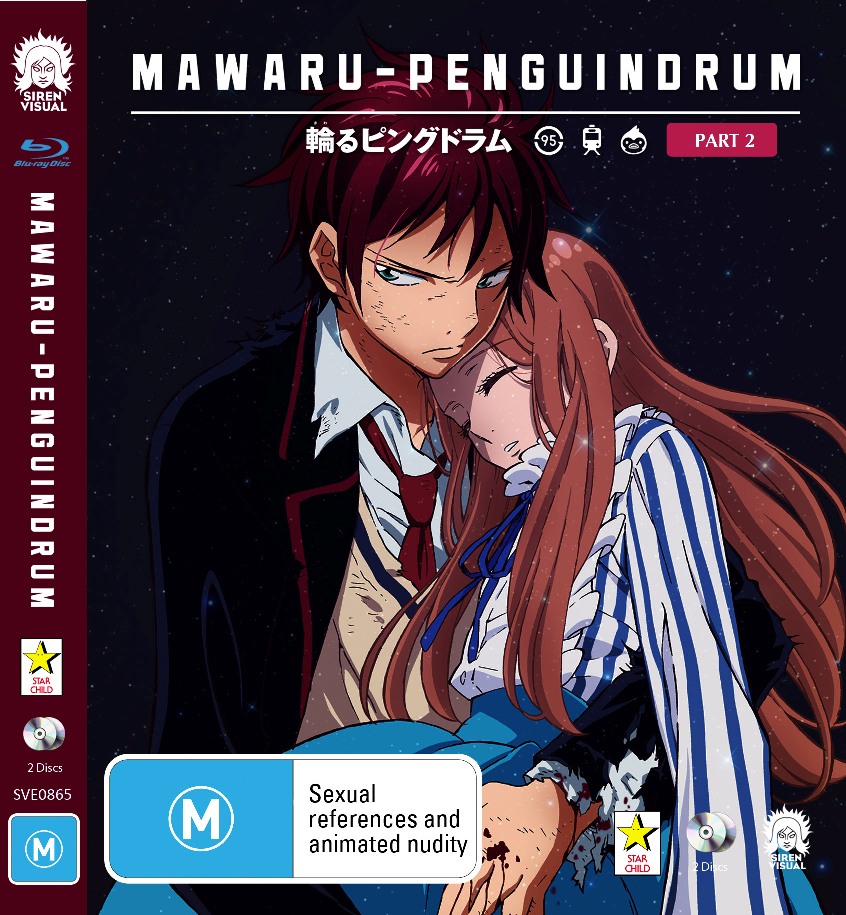 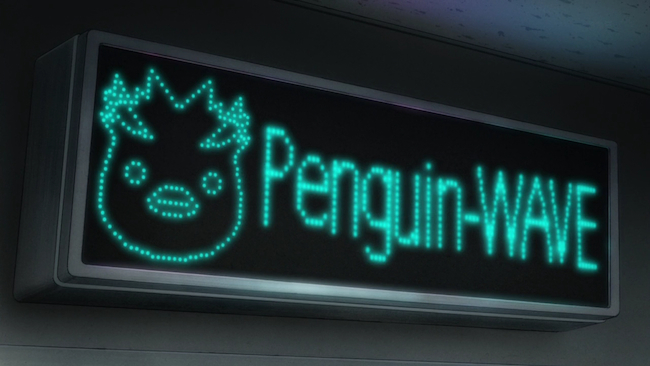 Welcome to Penguin Radio. All penguin, all the time.

Story
Penguindrum Part II picks up right where Part I left off: the Hospital. After the soul crushing events of the previous episode, a ray of confusing hope is presented in the form of Sanetoshi Watase. This pink haired stranger, whilst providing a solution to Himari’s problem also creates a very difficult situation for Shoma and Kanba. As the series progresses, this situation leads to an increasingly dark story that twists the lives of all involved. By the end of the series, no-one is the same as they were before.

Part II diverges from Part I in a fairly big way. Though it still keeps its quirky style, the darker elements that have been present since the beginning begin to take precedence. Each character is given an incredibly dark reason for why they act as they do, explaining some of the more crazy behaviour in Part I. Though as the series delves further and further into these pasts, the stories become intertwined, revealing previously unknown connections and motivations. Flashbacks occur much more frequently, with a decent portion of certain episodes spent in the past. Most of these flashback moments are presented as heavily stylised metaphors that, while providing information, can be somewhat difficult to decipher. Simple sequences may be simplified or even colour-shifted to convey an idea rather than simply depicting it as it happened. 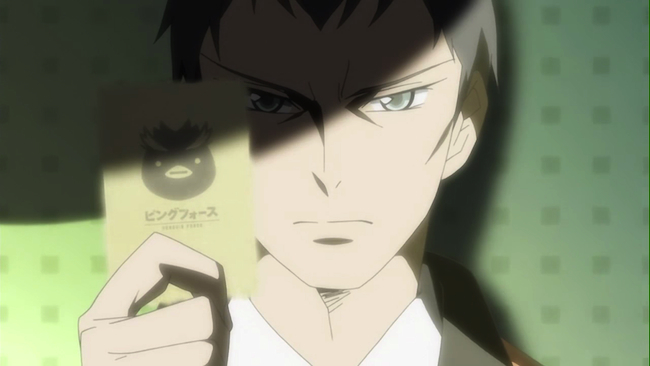 You just activated my trap card

As the series continues, Kanba follows a much darker path of character progression. Shifting far away from his original womanising self, he loses all sense of others as he single mindedly pursues his ultimate goal: Himari’s health. The nature of the Takakura family also completely changes. More of the siblings’ past is revealed, shedding light on their parents and the truth behind their abnormal upbringing. The series also introduces more detail to the supporting cast, broadening the view of the world and yet somehow simultaneously focusing the story more closely on the Takakura’s than ever before.  By the end of Part II, it becomes difficult to imagine how the characters could’ve possible acted the way they did in Part I.

Overall, the series shift focus from the central story arcs in Part I. Ringo no longer has such a prominent part in the main ensemble, having moved past some of her demons and come to accept herself. The diary itself, the core element of the early parts of the series, is mentioned occasionally as being important but is no longer the immediate goal of Ringo or the Takakura siblings, who begin to follow different paths. The penguins themselves are also relegated to background events, as the stories of their owners becomes more interesting, providing symbolic interaction rather than mere comic interruptions. 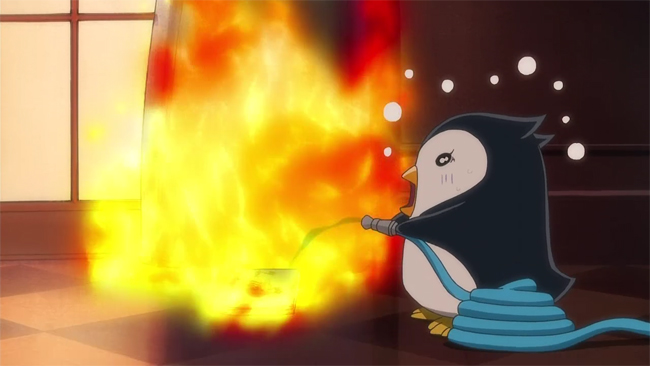 Visuals
For the majority of Part II, the series retains the same vibrant style it originally possessed. Kanba and Shoma continue to wield a vivid shade of red and blue hair respectively, singling them out from the background. During the more intense emotional scenes however, their hair colour fades along with the mood. Occasional fight scenes are animated to a much greater standard than the rest of the series, featuring  more intense facial expressions and more fluid movement. This contrast the majority of background characters, who continue to appear as male and female cutouts, though there are occasional instances of full designed citizens.

The series also employs a great deal of visual symbolism throughout the episodes. During flashbacks regarding the Child Broiler, an overly simplistic room featuring a giant shredder appears. This, combined with the shattered glass, the representation of broken people, create a very unique visual. The Survival Tactic sequences also appear far less than in Part I, but when they do they retain the vibrant and over the top style. 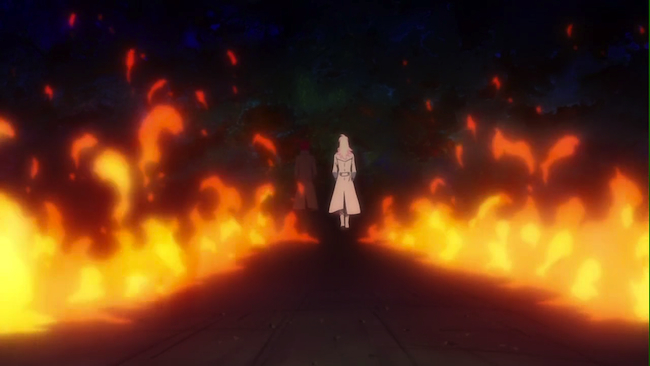 Audio
During the more emotional sequences present in the series, an almost haunting melody is played via chimes. This tune becomes the calling card for sadness in the series, sounding almost innocent, yet at the same time tragic. As the drama reaches crescendo, an operatic chorus kicks in, providing a more intense and poetic sound. At one point during an episode, even the upbeat “Rock Over Japan” insert  song receives a more sombre version, slowed down to fit the mood. With the increase in flashbacks, the alarm sound effect is heard far more frequently, acting as an introduction to each of the numerous cutaways.

The English dub itself continues to vary in level. Some characters possess emotive voices, adding realism to the scenes, whilst other characters present a somewhat dull reaction to certain important events. One particular character is purposely overacted, played for laughs during their brief appearance.

Extras
Penguindrum Part II contains the standard fare of extras, featuring clean versions of the series’ two openings (“Nornir” and “Boys, Come Back to Me”) and eight ending sequences (“Dear Future”, “Haiiro no Suiyobi”, “Bad News Kuroi Yokan”, “Ikarechimattaze!!”, “Hide and Seek”, “Private Girl”, “Tamashii Kogashite” and “Heroes ~Eiyū-tachi~”). Also included is the series’ “Rock Over Japan” trailer, along with a slideshow featuring various pictures and a montage highlighting important moments over the course of the 24 episodes. 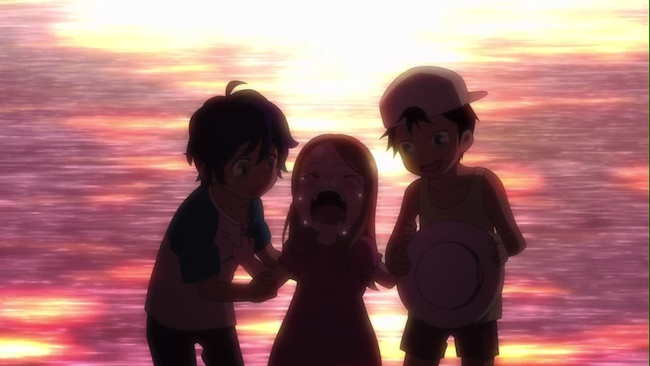 Overall
Mawaru Penguindrum Part II is noticeably different from Part I. Whilst the earlier episodes blended a dark storyline with a quirky style, Part II leans much more heavily on the serious elements of the series. The fantastical cutaways to the Penguin-clad spirit are all but gone and there is far less joy in the Takakura household. Part II answers questions that have been present throughout the series, but it does it in a somewhat convoluted fashion, melding stories into each other and revealing truths rather suddenly. The final episodes employ visual elements to the point where it’s difficult to imagine the actual events occurring outside of the metaphor. Overall, Penguindrum Part II is a much more serious affair than Part I. Still an interesting experience, but it trades the humour it originally possessed for metaphors regarding the truth of the human condition.