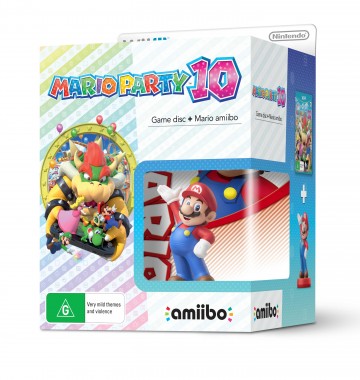 It’s pretty amazing where sequels are up to these days. From humble beginnings on the Nintendo 64 with the original Mario Party, three generations of consoles later and now the Mario Party series has entered HD with Mario Party 10. The last time I really partied with Mario was back on the GameCube with Mario Party 5 and while there are still some recognisable elements from those past games, Mario Party 10 is fairly different from the titles of old. It’s not necessarily a bad thing, just different. There is still fun to be had at this party, it just might be short lived.

Unlike all past games in the series where a small story would tie the game together, there is absolutely none of that here. Instead we have a main menu with three modes (two modes if you don’t own a compatible Amiibo), a store which you can spend Mario Party points in that you earn simply by playing and a few separate games that are in the awkward middle area between mini games and being their own game. You’ll have a little fun with those games but they are largely forgettable, especially badminton. 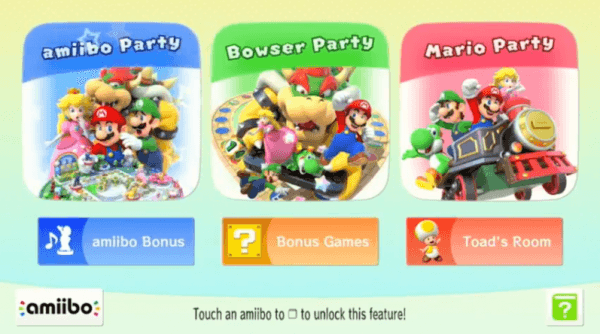 The game’s main mode is Mario Party. All four characters are placed in a vehicle and attempt to reach the end of one of five game boards (the lowest amount of any Mario Party to date) and defeat the boss at the end with the most mini stars to become the winner. Nearly every space gives some type of reward or punishment, such as a special dice block, mini game, lose half your mini stars etc. so the whole random fun element is in full effect here, you just don’t feel fully in control of it thanks to the car mechanic where you are simply along for the ride for three turns.

The main problem with the linear boards in comparison to past titles is that the game plays out the same way nearly every time, ruining the unpredictability which Mario Party is best known for and limiting replay value. That’s not to say the boss battles aren’t fun however, as just like the mini games which I’ll touch on later they are well balanced and require skill/smarts or sometimes both for you to be successful. A cool feature that helps mix it up a little is the GamePad which displays Bowser trapped behind a cage. When one of each number is rolled over the course of the game Bowser is set free and wreaks havoc on the board and player who freed him. One cool effect Bowser can bring on is reverse mini games, where you’re actually encouraged to lose instead of win, completely changing the way that mini game is played. Another gripe is how freely the game hands out mini stars. The game simply places them on the board and whoever is the leader of the car at that time and passes through the space can award up to eight mini stars. In comparison, mini games which largely require skill only hand out five to the winner in a free for all. In a similar vein, gone are the set bonus stars rewarding players who accrued the most coins or won the most mini games, replaced by a random selection of two bonuses from five that can include rewarding the person who simply rolled the lowest total amount. The real underlying problem of course is luck seems to be rewarded over skill.

This doesn’t make Mario Party 10 bad, just different. It’s still fun, especially with friends as players get poor dice rolls or have to lose half their stars to someone else and the leader still changes constantly. Most importantly, the mini games are fantastic. They are well balanced and require a good mix of memory, reflex, strategy and skill. Unfortunately, they kind of take a back seat to the game board in every mode outside of Amiibo mode as you don’t play them in Bowser party and you seldom play them in Mario Party outside of landing on a mini game space or hidden block. If you don’t have friends to play with though rest assured the A.I. provide a good challenge, especially at harder difficulties. 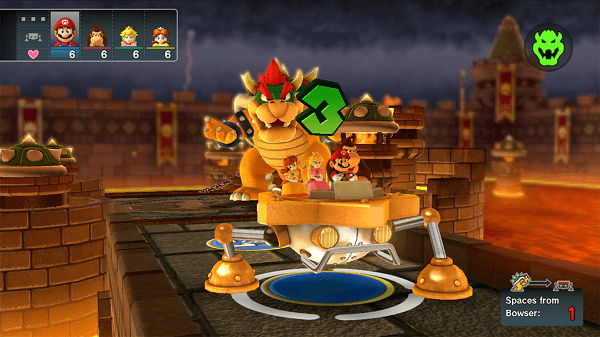 Bowser Party is a completely separate mode and rightfully so. Here one person uses the GamePad and controls Bowser who rolls four dice at once. Your goal as Bowser is to take down the opposing team of four players who are using Wii Remotes and trying to reach the end of the board before you reduce each member of that team’s hearts to zero. It’s a simple concept and one that works well and is a lot of fun. Being the overpowered Bowser is fun especially as he stomps through the course and can place traps in some locations on the board. You also get a unique perspective of most mini games where you do the most damage to the other teams heart totals.

Sadly, there are only 10 unique Bowser mini games and two are luck based with little input. The rest do make good use of the GamePad’s unique features though, such as breathing into the mic to shoot fireballs. Another negative is only three of the five boards are available in this mode, decreasing the replay value of this mode. Again the mode seems to come down to luck which weighs a little too much in Bowser’s favour. Bad dice rolls will lead to Bowser catching you each turn and stealing too many hearts. Once one player on the team goes down it’s pretty much game over as your dice rolls are then limited. Bowser being able to re-roll doesn’t help the situation nor do the many traps placed for the team in the home stretch. Overall it’s a fun mode just lacking in variety and a little unbalanced.

Amiibo Party is really just too bland to be anything special. Sure it brings back the classic coin and star system and mini games in between rounds, but at the expense of any sort of uniqueness or strategy within the board itself, which is literally a square board like monopoly with a few very repetitive events sprinkled around and one special type of space such as warp pipes on the Mario board. The game only lasts 10 turns with no option to change it. Cool things can happen with the tokens that are spread about the board but because they are so limited and the games are so short you would be lucky to even get to use one or two a game. Anyone without a compatible Amiibo really isn’t missing out on much here.

Surprisingly, there are some annoying user interface features present in Mario Party 10. Constantly being told to turn my controller back to the upright position after a mini game, which isn’t necessary in order to take your turn is incredibly annoying. In Amiibo mode you are constantly bugged to tap the Amiibo to the NFC device on the GamePad which always has a slight delay to it and I can imagine it being a huge pain with four players all trying to do so, juggling their remotes, Amiibo and the GamePad. It should be noted a lot of people are saying it is required to tap the Amiibo to role the dice, that is simply not true you can just press A, the game just doesn’t tell you that for some reason even though it gives you heaps of other obvious advice. Most other actions do require the Amiibo tap though. 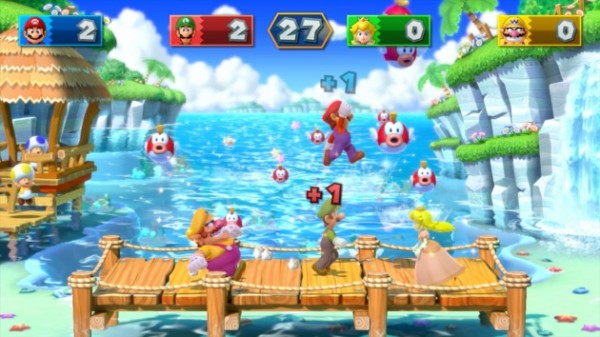 The game is also overly child friendly, displaying notes over the game board literally telling you the dark purple stars are bad or that the gold stars are important and you want to reach them. In contrast, basic controls and mini game instructions are not clearly detailed, instead a single line of text that scrolls so you have to wait to read it sits along the bottom of the mini game video and no tips are offered either.

Mario Party 10 is a great looking Nintendo game that seems to be running off the Super Mario 3D World graphics engine. Characters are well modeled as are the game boards and the signature bright and colourful ‘Nintendo’ style is in full effect here. Textures are high resolution, menus are cheery and all the special effects and lighting also look great. The only slightly odd thing I noticed was DK’s arms when he lifted up the Superstar at the end of a Mario Party, it’s like he’s wearing a shirt with long sleeves as opposed to normal fur but if that’s my biggest problem with the games visuals then you can tell I didn’t have much to complain about. 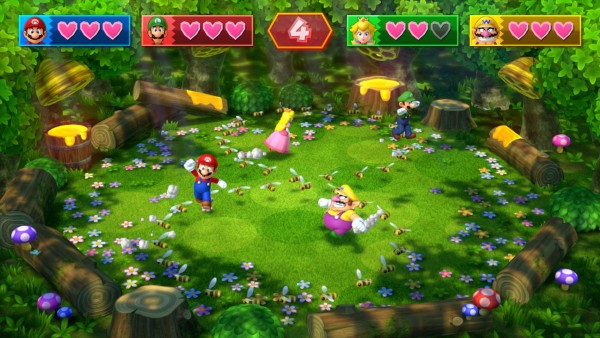 Like the visuals the audio is also pretty classic from a Mario Party series view. Audio is mostly forgettable but it all fits the mood of the board/event/mini game perfectly and there are a few stand out tracks you might find yourself enjoying quite a bit. Bowser’s challenge theme and the 2nd theme for the spooky ghost board stood out to me as hits. All the characters sound as they have in past titles and all retain that charm we know and love. There’s really not much else to say here, the Mario Party series has always looked and sounded good and Mario Party 10 is no exception.

I was admittedly a bit apprehensive coming into Mario Party 10 due to the car mechanic but I can’t deny I had fun playing the game. The mini games are top notch with great balance and variety, Bowser Party is a good take on asynchronous gameplay and a fun mix on the formula and having the car in standard Mario Party allows for quicker games, albeit at the expense of non-linearity and less emphasis on skill and strategy in comparison to luck. The question for me lies in how much more fun I will have with this title as the minimal amount of boards and lack of outcomes within them don’t really encourage multiple plays. Small user interface issues aside, solid visuals and audio along with a few extras make Mario Party 10 a decent sized family fun package offered at a fair, cheaper price point.