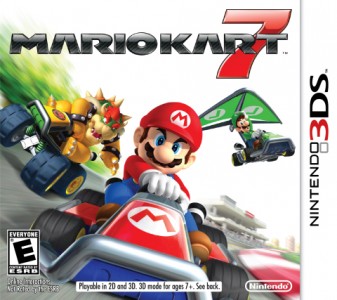 Overview:
You already know what Mario Kart 7 is like: every other Mario Kart game, refined and expanded, making good use of the platform’s features, with a few new characters, tracks and weapons thrown in. Sure, Nintendo have been accused of milking the Mario cash-cow, but honestly, when the formula is this good, does anyone care?

Gameplay:
Mario Kart 7 contains exactly the kind of gameplay you expect: racing around the Mushroom Kingdom, using bizarre items to help you or hinder your opponents. It’s more than your standard racing game, as the items and environmental hazards make the experience more hectic, while remaining very balanced.

The game tries hard to keep all the racers as close as possible, tweaking the likelihood of weapons proportionate to a player’s current placing – i.e, those in lead are dropping bananas, those in back get the Bullet Bills and blue shells. It may not seem “fair” to purists, but it keeps races exciting for everyone, as a come-from-behind victory is never out of the question, and final scores almost always comes down to the tense home stretch. 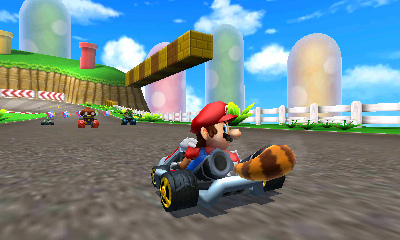 Some of the best driving techniques have been cherry-picked from previous versions. The drifting system is easier and more effective than ever, you can still perform a trick off a jump for a boost (with a tap of a button rather than an awkward shake of the Wii remote), and my favourite, the clever slipstream boost, also returns. It presents an interesting risk/reward system, by coaxing you into driving right behind a kart for a decent boost, in the process risking a banana in the face.

As usual, the game offers a lot of stuff for a single player to complete (even if a lot of it is very similar), but the true experience is to be had with friends. Or, increasingly, random people online.

Mario Kart 7 continues the tradition of its Wii and DS predecessors of offering a massive 32 tracks – 16 brand new ones, and 16 classic tracks from the franchise’s previous six games. Grand Prix mode alone will keep you going for a while, with eight Cups to win, then win again for each class (50cc, 100cc and 150cc, plus an unlockable “mirror mode”), then you can try to get a three-star rating for your driving on each.

The new features that Nintendo are promoting as game changers are the ability to take to the skies and seas; karts can now glide and drive underwater. This opens up more varied alternate pathways, as strategic advantages could be found from dropping through a hole in the ice to drive on the lake bed, or hitting a ramp to launch into the sky.

I’m not fully sold on how useful these additions are though. Soaring through the air can be fun, and gliding physics change up the game somewhat. They can also add a hazard of sorts: an opponent’s weapon or bumping into something mid-air can cause you to plummet and drop a few ranks. 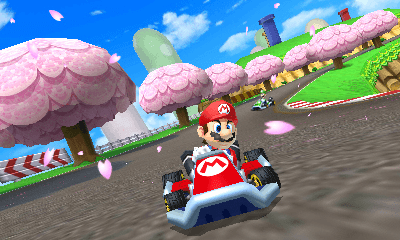 But the underwater sections seem rather unnecessary and more of a cosmetic change than anything. Besides being an alternate path, the only connection to gameplay I’ve suspected is that heavy karts handle underwater driving better than light ones, while light characters are better equipped to glide. It would add a strategic element to choosing your character, path and play style, but if it is in place, its effects are minor enough to not notice them.

It also seems like these features are tacked onto every course, whether they fit or not. Some of the classic courses appear to have been chosen for their ability to seamlessly integrate these sections, but in others they feel pointless, making you glide for a short section over a straight stretch. When it’s done right (which is a lot of the time), it works, but the urge to tack it onto everything should have been resisted.

The most important new feature is the deeper customization. Players can now put together their own kart by choosing a frame, wheels and glider, all of which adds or subtracts stats like max speed, weight, handling, etc. The character affects these as well, meaning that experimenting with combinations of characters and kart-parts is necessary to find what suits your play style. If you prefer cutting corners, beef up your Off-Road stats. If you’re more into building up speed and powering ahead, you might trade off acceleration for raw speed.

This deeper system adds a lot to the game, and it’s weird to remember previous games lacked it. Obviously you could always choose a vehicle geared more towards speed or power or whatever, but this is much more personal. 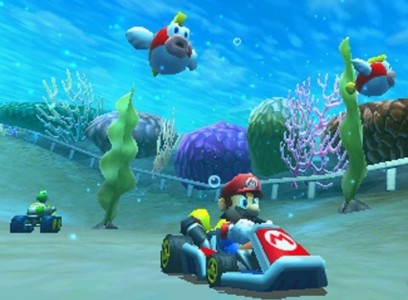 Another returning feature, which hasn’t been seen since the original Super Mario Kart back on the Super NES, are the collectable coins scattered around the tracks. Coins are as Mario as moustaches, but their return to the Kart series is dubious. Essentially, they act as a kind of power-up, whereby each one collected will increase your speed and weapon power, up to a maximum of ten. In practice though it’s so minor as to be rather pointless.

Crash Bandicoot’s kart-racing clone, Crash Team Racing, used a similar system, to a much more defined end: collecting fruit noticeably increased your speed, and when you hit the target ten, your weapons were upgraded – the time-delay TNT became instant-sploding Nitro, the leader-seeking energy ball would hit every other racer on its way to the front, that kinda thing. Mario Kart 7’s coins hint at this kind of system, but it seems to be another missed opportunity for a game-deepening mechanic.

There’s a couple of new-but-old additions to the zany arsenal. The iconic Fire Flower lets you spam out heaps of fireballs within a short time, potentially spinning out opponents multiple times. Tying in with Super Mario 3D Land, the Tanooki Tail will let you whack anything within a short range, useful for slowing enemies or deflecting incoming shells and the Super 7 summons seven weapons at once, which circle around you and can be fired in any order. 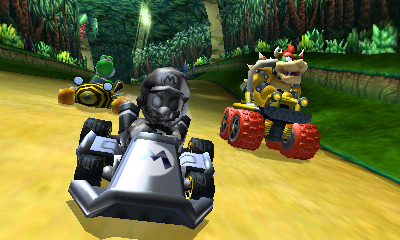 The new characters display some odd choices. I won’t give them all away, but the two who were announced prior to launch are Lakitu and Metal Mario. You may not know Lakitu by name, but he’s that guy who flies around on a cloud and throws spiky vermin at you, before adopting the more peaceful tasks in Mario Kart as the guy who holds the starter lights and rescues you when you drive off a cliff.

Metal Mario was a power-up in Mario 64 and a mini-boss in Smash Bros, and now takes his place alongside his fleshy doppelganger as a kart driver.

Sadly, my favourite, Waluigi, was removed from the roster to make room! That purple-clad beanpole villain of the damsel-distressing variety wasn’t popular among my friends, but dammit I love him. He is sorely missed by me, and no one else.