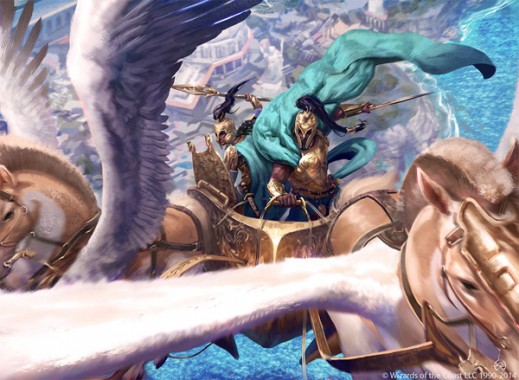 NOTE: Since Intro Decks are made for newer Magic: The Gathering players, I wrote the review to reflect that, and used some terminology that only Magic players will understand. This review was constructed using the Mortals of Myth Intro Pack with references to other standard-legal sets.

Wizards has taken us on a whirlwind adventure through the ancient Greece inspired Theros block for the better part of a year now, and with the release of Journey into Nyx, that adventure has come to a close. With a whole bunch of new abilities and new cards for players to strategise over.

Mortals of Myth is a White/Green intro pack that focuses on +1/+1 counters. More specifically, it focuses on getting as many +1/+1 counters onto your creatures as you can. It accomplishes this with a bunch of creatures with Heroic abilities. Heroic makes it so that creatures you control get additional benefits when they are targeted by spells that you cast. The Heroic Abilities are only the first part of the pie for this deck however, with the second half coming from the newly introduced Strive mechanic. Spells that have Strive allow you to pay additional mana in order to target multiple creatures with them. That means with only one card, you can activate the Heroic abilities of all of your creatures.

There is an interesting dichotomy with this deck. Many of the permanents are white, while many of the deck’s instants and sorceries are green. There are of course a little bit of bleed between the two, but primarily you will be leaving white things on the field and casting your green things as one offs. Even the deck’s two rares are both white-aligned. Here they are: 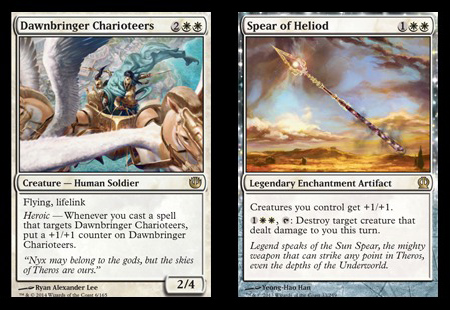 Dawnbringer Charioteers is by far one of my favourite cards from Journey into Nyx. It costs 1 extra mana than Wingsteed Rider does, and has an all the bells and whistles plus an additional 2 toughness and lifelink. This card is a gamechanger, and if left unchecked can cause some serious damage to your opponent. Spear of Heliod is another great card from Theros, and gives all of your creatures +1/+1 while also serving to ward off attackers. It’s ability is a bit restrictive in that until you have a five or more land in play.

It is fun to see what kind of combinations this deck can pull off, especially since it is in white/green – two colours that are typically associated with small creatures and getting tonnes of mana. Sadly though, this deck doesn’t exactly feature too many of each. The creatures in the deck aren’t exactly big, with most sitting around the 3-4 mana cost, which hopefully means you will be casting them around turn 3. Golden Hind is going to be the card that has you playing creatures out earlier than you should – it is a new twist on the staple “Llanowar Elves” card that has existed forever.. Plus it has some cute as artwork. 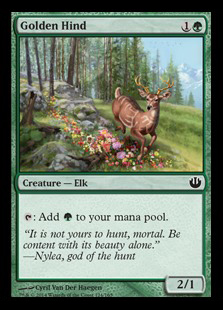 Once your creatures are on the field, it is time to hit them with the Strive spells. Anything that targets more than one creature at a time is a massive bonus in this deck, and can help combat the fact that you probably wont be doing much attacking until turns 4 or 5. All eight Instants and Sorceries in this deck have strive, so you have to wait until the absolute right moment to play them. 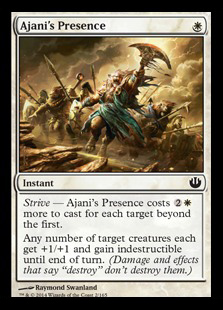 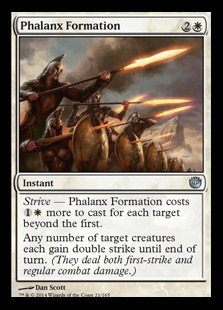 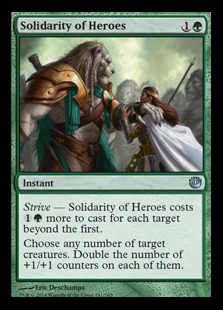 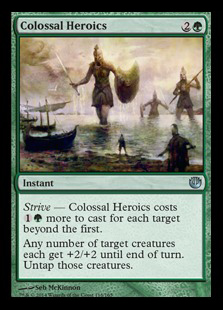 Lastly, we have a few more creatures and some enchantments that are there to ramp up your creatures even more. Namely this big guy: 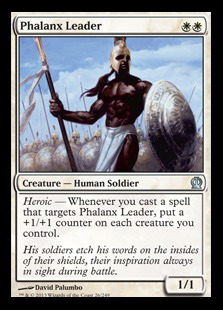 Easily my favourite card from Theros, Phalanx Leader puts a +1/+1 counter on ALL your creatures whenever he is targeted. That means if you strive a spell onto both him AND another creature, they will get the bonuses from each heroic ability. Can we say massive creatures quickly? It is also of note that enchantments will trigger Heroic so Raised by Wolves will turn something like Pheres-Band Thunderhoof into a 7/8 behemoth all on its own. 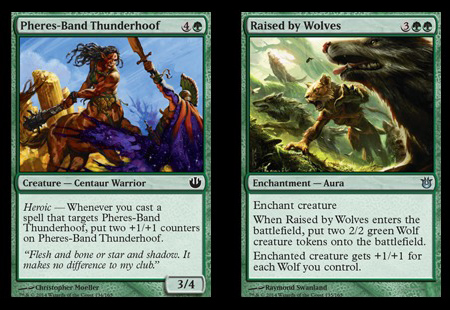 The rest of the creatures either help you slow down your opponents, or build up your dudes in their own way so that when you swing in to attack, it is worth it. There is a good mix of spells and abilities here and it all synergises quite nicely. The major flaw is how slow the deck can feel, with most of your attacking creatures coming a little later into the game. If you were going to take this deck’s concept and make it a bit better, creatures like Favored Hoplite or Elvish Mystic would help it out in the early game.