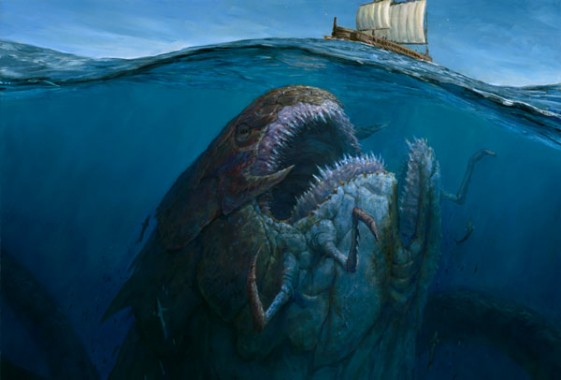 NOTE: Since Intro Decks are made for newer Magic: The Gathering players, I wrote the review to reflect that, and used some terminology that only Magic players will understand. This review was constructed using the Fates Forseen Intro Pack with references to other standard-legal sets.

Scry, Scry miss American Pie. Fates Forseen is all about scrying through your deck and seeing what is coming next. Or more specifically, deciding what is coming next. Magic the Gathering’s Scry mechanic has been around for a long time, but it recently came back in a big way with the Theros block. Now we have Fates Forseen, a Blue/Red deck that will have players scrying every. single. turn. Being able to manipulate what comes next is a huge advantage in Magic, and this deck proves it.

So this deck is at its core a beat-down deck. Unlike most traditional aggressive decks that want to play little things and overwhelm the opposition, Fates Foreseen wants to play things that can keep your opponent’s creature’s at bay before blasting through and ripping the field wide openI Sure your opponent will have a few blockers up their sleeves by that point in the game, but that is what your rare card is for! Lets take a look at the cover-card for this deck; Scourge of Fleets 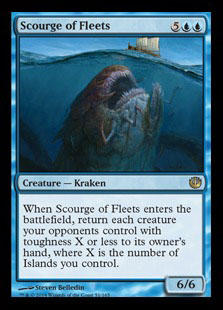 Ok, so 7 mana is a little expensive, but it is still a 6/6 and it has a pretty awesome ability. Returning creatures to your opponent’s hands equal to the amount of Islands you control is awesome, especially late game. Removing a few pivotal blockers from the game can really open you up to swing in with just unseemly amounts of damage. While there is only one of him in the deck, the fact that almost every second card has the Scry ability means that you will be able to filter through your deck to find him in now time, especially if you get your other rare onto the field early enough. 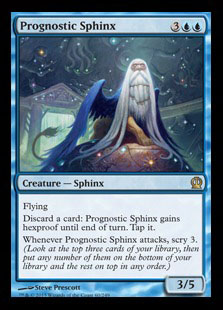 Prognostic Sphinx is one of my favourite blue cards because it does literally everything blue should do. It flies, it scrys and it protects itself. Oh and when I say it scrys, it scrys BIG. scry 3 whenever it swings at your opponents is massive, and if you happen to be playing Omenspeaker that turn, or utilising either of your Sigiled creatures, then you are looking at scrying 5+ cards away.

Of course one sphinx and one bomb-card aren’t going to win you the game. Scrying has more use than to just help you find cards. A few red cards, that just so happen to be included in this set turn your card-advantage into a very real, very scary board presence. Flamespeaker Adept and Knowledge and Power are your main win conditions here: 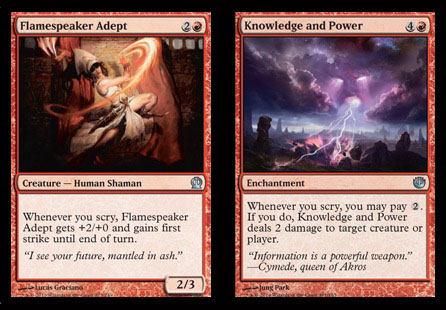 A few other creatures fill in the ranks, but the crux of the deck is its spell list. Cards designed to scry away useless junk, burn your enemies or draw you more cards. However, it isn’t all smiles and sunshine, as there are a few cards that the deck really doesn’t need. 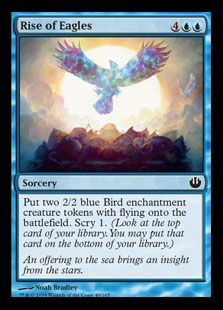 This. This is a bad card. Part of the job is an Intro Pack is to teach players what is good and what is bad – well this is bad. Sure it is a card with a lot of utility; it gives you two birds and lets you scry but look at its mana cost. Your Scourge of Fleets only costs 1 more mana and when it hits the field, you know the game is about to shift into a whole other gear. 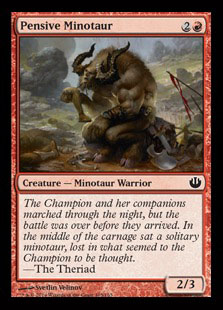 Pensive Minotaur isn’t a BAD card, but he does nothing. He sits at a good point on the curve and getting him out turn 3 is nice and all, but there is so many better things you could be playing. So how would I improve on this deck? Well since this is a deck that is all about delivering a massive beat-down and manipulating your own deck to make sure that happens, I would make the following adjustments (if you have the resources of course). First I would get rid of these: 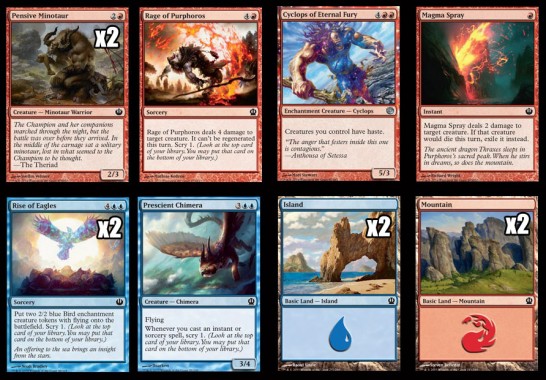 And replace them with these:

Now you have a deck overall costs a little less mana, and will hit a little bit harder while still keeping the “Scry your entire deck” strategy front and center. I have to say that although this deck is absolutely, positively not competitive it is still a LOT of fun. It is probably the most fun I have ever had with an Intro Pack and the look on other people’s faces when every other card you play lets you scry is a laugh riot on its own. I have been playing magic for over a decade and this deck has inspired me to go and make a ridiculous scry-based deck of my own, so if you’ll excuse me I’m going to go do that.