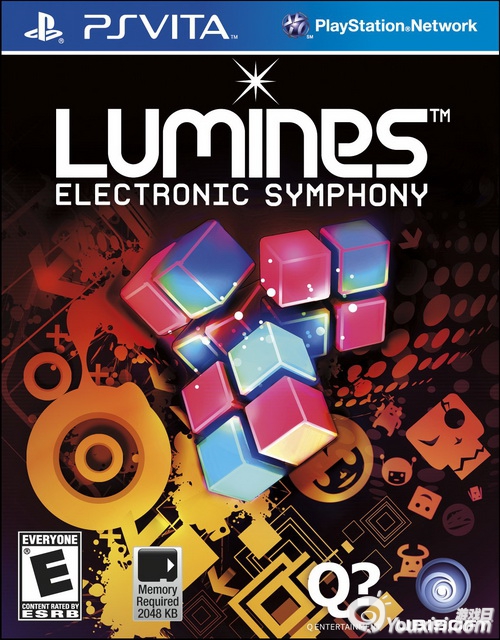 Overview
Lumines Electronic Symphony forms part of Ubisoft’s launch line up for the PlayStation Vita, and is approximately the sixth entry in Q Entertainment’s puzzle series (give or take a few ports and mobile offerings). It’s a nigh on perfect slice of handheld gaming that caters for just about every occasion and is beautifully presented to boot – if you own a Vita then you should have this game.

Gameplay
Lumines has at its heart the founding principle of all great puzzle games – a deceptively simple core mechanic. Two tone blocks fall from the top of the screen, and the player must rotate and place them to create squares of the same colour, thus clearing them from the screen. Blocks will only be cleared when passed over by the Time Line, so to create larger squares and build bigger scores good timing and strategic placement are essential.

If you’re new to the series then this may not seem like much, but Electronic Symphony will sneak into your brain and steal all of your time – it is ridiculously addictive and anything but simple. The seemingly basic strategy required to play quickly deepens when you discover the new Avatar abilities and special blocks. Each avatar in the game has two of ten special abilities, which are activated by tapping the Avatar and recharge over time. Amongst those abilities is the option to conjure a Chain block, one of two special blocks that can have a serious impact on your game.

Chain blocks will clear any squares of the same colour that they are directly attached to, so come in handy when you get into a bit of a tight spot. Shuffle blocks however, are a lot more chaotic in their impact. As the name implies, these lovelies will randomise every block on screen, instantly destroying your beautifully crafted arrangements. They can of course be an absolute lifesaver as well, so fitting them into your play strategies can seriously boost your scores. 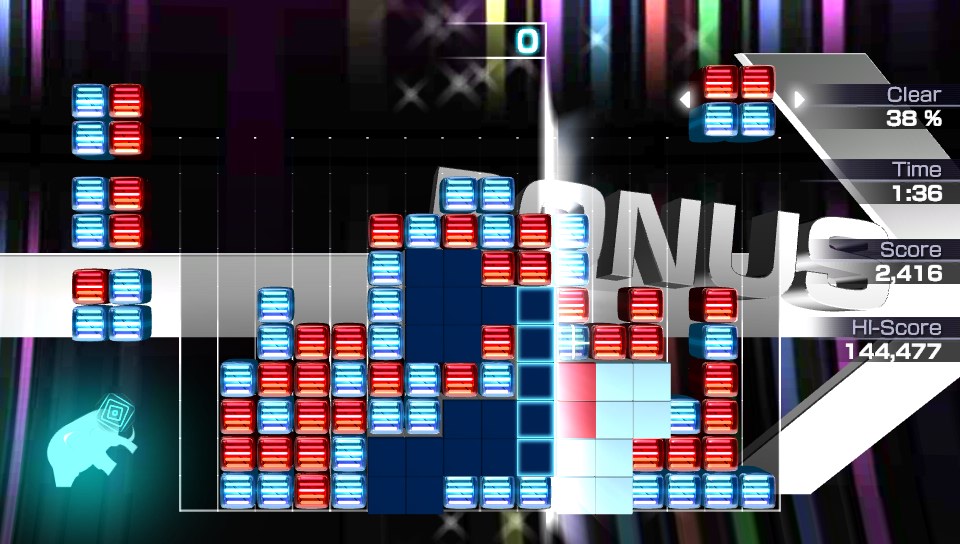 Playing any of the game’s many modes will earn you XP, and levelling up unlocks new Avatars and stages. New Avatars bring with them new ability combinations, so the more you play the more strategies you’ll have at hand to conquer those bricks. Talking about strategy is all well and good, but the trick with Lumines is to be strategic and fast. As you play the game things become instinctive, and you find yourself almost subconsciously making moves that you would have had to think about just a few playthroughs ago. What seems like a few minutes can quickly become an hour as you sink into the game, utterly absorbed by the action on screen.

Controls are best handled by being old fashioned and sticking to buttons. There’s nothing technically wrong with the touch screen controls (tap to rotate, drag blocks down with a swipe etc) but when the action picks up there’s just no way that you can keep up – I found myself back with the face buttons without even realising it.

The main way that you’re intended to play Lumines is in Voyage mode, a continuous stream of blocks and stages that won’t stop until unmatched blocks fill the screen. Pass a stage and you’ll be gifted with a new skin – a set of music, blocks and background that can then be accessed in other modes of the game. If you’re up to the challenge then playthroughs of this can take up considerable time for a portable title, and it’s certainly the best way to improve your skills.

If you’re looking for a shorter session, then Lumines comes packed with plenty of options. There are 30, 60, 180 and 300 second bursts of block matching available, so whether you’re settling in for a marathon session or just jumping in for a minute or two, Electronic Symphony has you covered. Playlist mode is a fantastic addition that lets you build and save your own playlist of skins, so not only can sessions be as short or long as you want, but you get to pick the tunes as well. 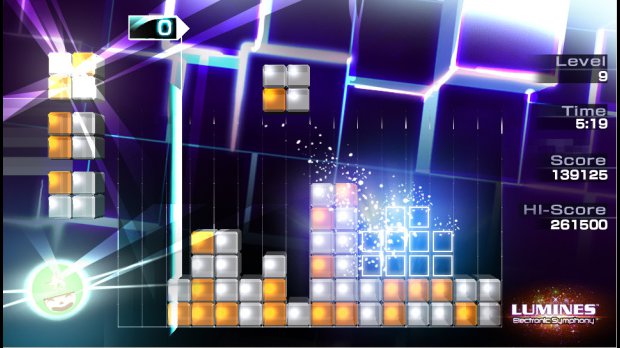 Multiplayer manifests in Duel mode, which throws you into ad hoc only match ups. Players compete to push each other off the screen and the mode gives you access to the Duel only Avatar abilities for some extra chaos. Unfortunately both players must have a copy of the game. Online multiplayer is tragically missing, and this is the one thing that holds the game back from being the perfect Lumines experience. Without it there is nothing unique about the Vita version of the game – if you’ve played Lumines before then there perhaps isn’t enough to attract you to this version.

For the hardcore Lumines player there is Master mode, a series of five challenges that are insanely fast and tricky. Each stage must be survived in order to unlock the next, so newbie players shouldn’t expect to be seeing stage five anytime soon.

Lumines Electronic Symphony is about as comprehensive as it can be with its selection of game modes. Other than online multiplayer, every experience you could want from the game is on offer here, with each score in each mode meticulously recorded into the leaderboards. Getting fed up is simply not an option – new content constantly unlocks and you can see yourself getting better with every round. Addictive, easy to learn, difficult to master, whatever clichéd praise you throw at it, Lumines Electronic Symphony is simply a must have for the Vita. 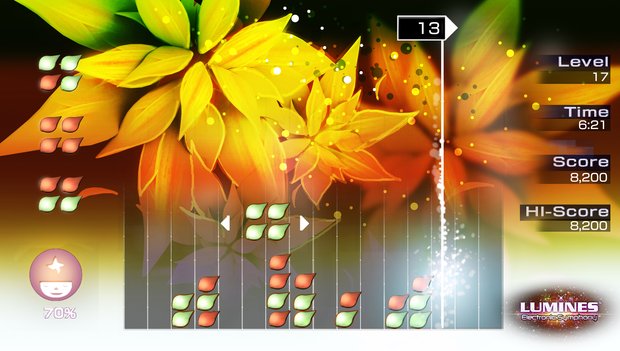 Audio & Visual
One of the main things that makes Electronic Symphony so creepingly addictive is the amazing integration of the presentation with the gameplay. Every move you make on screen is blended into the music with a beat, giving your actions impact on both the audio and visual output of the game. There’s something about this and the vivid colours, the dynamic backgrounds and generally awesome music that combine to encase your brain in a wonderful cloud of utter distraction. To add to that there is a great selection of 41 skins featuring musicians such as the Chemical Brothers, Pet Shop Boys and LCD Soundsystem. Electronic Symphony couldn’t look or sound any better – if it did it would probably make your brain explode.

Overall
The only major issue here is the lack of online multiplayer. Everything else in Lumines Electronic Symphony is incredibly strong. The wide range of modes makes it amazingly accessible, and the learning curve is perfectly pitched to lure you into chasing those high scores. The presentation is fantastic and playing along to The Chemical Brothers’ ‘Hey Boy, Hey Girl’ is a slice of gaming gold.