Well here we are, the ending to what has been one of the surprise success stories of the year. Life is Strange Episode 5: Polarized wraps up this five part tale about time traveling Max Caulfied, her companion Chloe and the small sleepy town of Arcadia Bay. The previous episode, Dark Room, delivered plenty of intense moments and served as a great setup to the finale, so does this final chapter manage to capitalise on that and give this series the send off it deserves? I’m glad to say it does.

Quick note, this review will be completely free of specific story spoilers for this episode and the past ones, so feel free to read on if you haven’t played this chapter or Life is Strange at all yet. 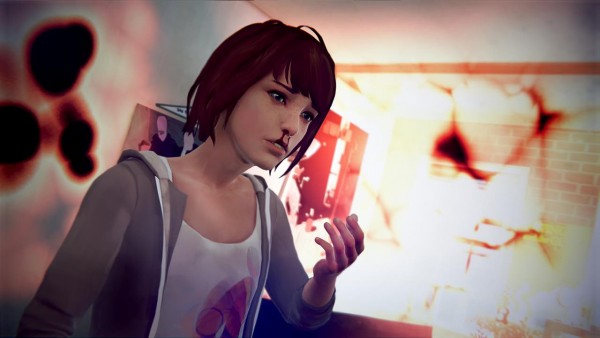 Picking up right where episode 4 left off, the chapter starts off with Max in a sticky situation. Immediately the game has a much more sinister and edgy tone about it, in stark contrast to the pleasant beginnings of episode 2. From there the story takes numerous twist and turns as Max tries her best to use her powers for good and fix everything once and for all, jumping through all sorts of alternate timelines and realities to do so. The butterfly effect is in full motion here and it’s really interesting to have it played out in front as you witness all the cause and effect that even a small action can have on the rest of the world.

Each episode of Life is Strange has become progressively darker and episode 5 is no exception. The story takes an unexpected turn here, going deep into the psyche of main character Max Caulfield which leads to some truly shocking set pieces that deal with many facets of Max’s insecurities. I honestly feel a bit out of my depth trying to review the story as I’m sure a media analyser could probably break this chapter down to reveal all kinds of themes and symbolism that are at work here. That in itself is a testament to the games incredibly thought out story structure, characters and mise-en-scene as there is nearly always a meaning to each item placed in this games world. 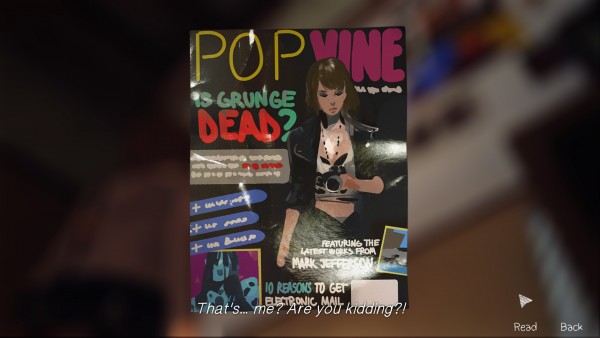 The good thing is you don’t have to be a media expert to enjoy the journey being played out. It’s a fun and genuinely intriguing ride that comes with more than it’s fair share of “what the …” moments. Life is Strange is an emotional roller coaster ride that can have you smiling at something as simple as a dog being alive to crying because of some ironic tragedy. Luckily throughout all the seriousness the games mild humour still breaks through in pieces, with some funny (yet creepy) text messages, a classic Alyssa situation or Max’s witty observations still managing to pull a much needed laugh from this dark chapter.

Even before the ending which I’ll touch on later, we get some fantastic heartfelt moments with some characters that really brings their personal development and relationship with Max full circle. It’s a satisfying payoff after spending time with these characters throughout the previous episodes and makes all those past exchanges and decisions feel meaningful and rewarding. Unfortunately there are a couple of minor characters that seem to have been forgotten about, which is a shame as past interactions had me feeling like those characters were building up to something more. 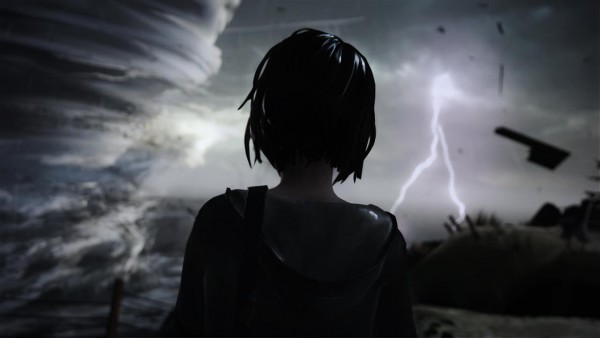 Now for the two questions I feel a lot of people want answered. Did your choices really matter in the end and how was the ending? Strictly speaking about the ending, your choices have very little impact on how it plays out, but it is important to mention that all your choices definitely affect the journey, particularly in the way characters react to you and in the dialogue. For a minuscule spoiler example, back in episode 2 there was  an opportunity to mess up some railway tracks. Then in this final chapter, a truck driver has to make a delivery the train couldn’t make which in turn leads to him getting in to some nasty trouble. This is only a small example and there any many others like this, some with larger consequences. I am sure that nearly everyone’s play through will be at least slightly different even if their destinations are identical.

As for the ending itself, Life is Strange features two very distinct endings which stems from one, final major decision. Some people may be dissapointed by this, but I felt this was the moment the entire story had been leading up to and it felt like a natural decision that had to be made. The ending I chose, which for lack of a better explanation feels like the games ‘intended’ ending, was nothing short of excellent. The framing, the setup, the aftermath, the score, the themes and the closure, everything just comes together beautifully and I felt it was a perfect send off for the series. 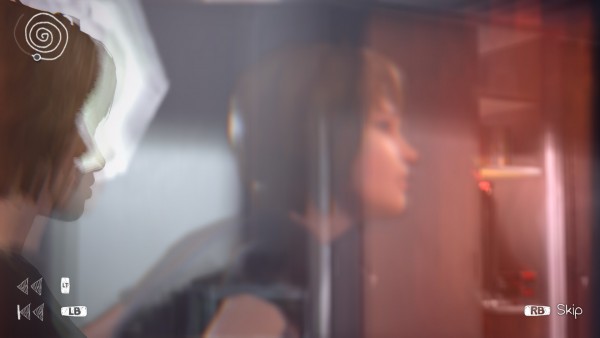 Most of the gameplay in episode 5 is the same as the last four episodes. You control Max and walk around looking for the next prompt to advance the story, investigating the area and taking the odd photo for an achievement whilst doing so. Episode 5 definitely features the least amount of actual gameplay from all of the games chapters, with less exploration, less puzzles and less decisions to make as this chapter focuses a lot more on story telling.

Luckily in this case it does feel like less is more, with some interesting and diverse environments to explore and some of the funnest time and spatial based puzzles the series has offered yet. The exception here is an out of place stealth section, but thanks to Max’s rewind power traversing the section is very forgiving and the atmosphere and clever in joke about bottles (that anyone that played episode 2 will understand) make it bearable. 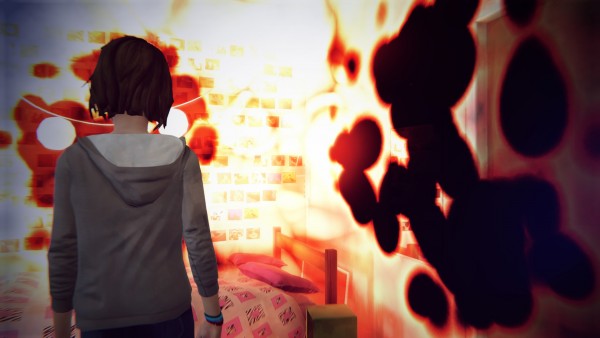 The choices you make in this final chapter feel most important here as they will ultimately bring closure to a lot of the games plot points. Of course thanks to Max’s time powers you can (most of the time) watch the immediate consequences of one action play out and then rewind the game to view the other, allowing you to make a more informed choice before you pick permanently. This is a much appreciated feature for people who like to see all the different branches in games like this.

The graphics in this game are reminiscent of a 3D water colour painting with lots of soft tones and visible brush strokes. It looks great and details on characters and the environment are impressive for an art style that appears simplistic on the surface. Environments are incredibly detailed and have just as much personality as the characters within them. Episode 5 gets more than a little ‘trippy’ at times and the special effects and visual trickery used here go a long way to accomplishing that atmosphere. Dontnod should be applauded for their use of symbolism and visual cues, which help in both solving problems and connecting certain story elements. 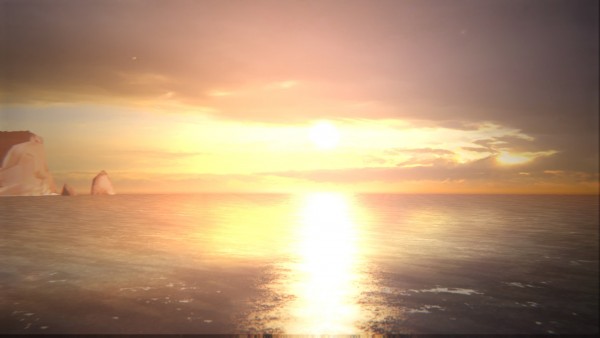 The games interface is very clean and intuitive. Hand drawn lines pop up to represent objects you can interact with and also when the game is saving or you have made a consequential decision. When you perform a rewind the visual effects used are really powerful, user friendly and aren’t slow or clumsy. The freedom of the camera movement is fun to play with and allows you to set up cool screenshots in lieu of a proper photo mode.

The bad lip syncing, which was a problem early in the series and was rectified in episode 4, is done well here and I praise the developers for also patching the earlier episodes to have the newer lip sync code. My only negative with the visuals that I didn’t really notice until now is that some NPC’s don’t look your way while talking directly to you, which can look very strange especially if they are looking at somebody else. 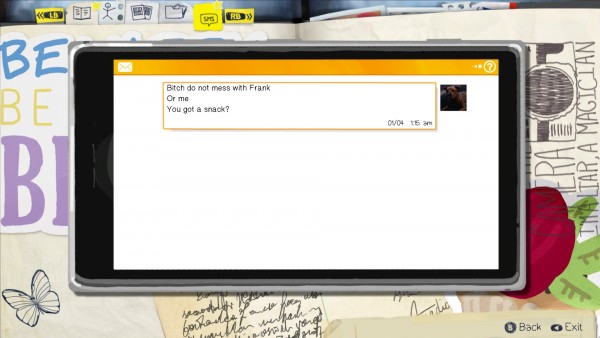 On a quick performance note, the PC version has plenty of visual settings to adjust and even on my only decent PC, I suffered no performance issues while playing even while running max settings.

While Life is Strange has been very good in the audio department all round, the finale manages to outdo itself. Each of the voice actors have taken all their experience from the past episodes and delivered their lines perfectly here, even through a couple of awkward and out of place lines of dialogue. 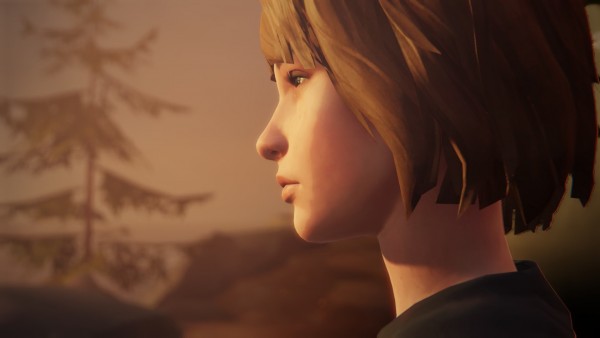 The sound design remains excellent, with all the ambient backing tracks and sound effects adding to the tone of the scenario and realness of the world. Episode 5 doesn’t feature much licensed music but the way it is used during the ending scene is nothing short of perfection, making a memorable ending even more so.

Powerful, emotional and engrossing, Life is Strange Episode 5 totally nails it to deliver a completely satisfying ending, wrapping up every major plot covered across the previous four chapters and showing meaning to a lot of our past choices. The story is beautifully delivered through the unique watercolour aesthetic and the sound design and backing tracks couldn’t work any better together with what is being presented on screen. While the final chapter of the game may have been a little short on gameplay and choices, those insignificant flaws can easily be overlooked as they allowed Dontnod to tell a beautiful tale. Life is Strange Episode 5, and the entire series itself, has been a joy to play through and I couldn’t recommend it enough to fans of story based games. 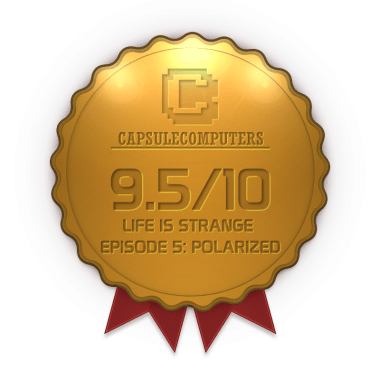