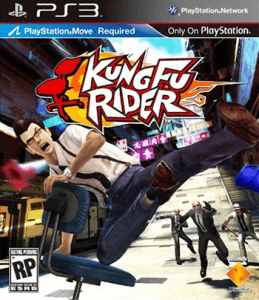 Developed by Japan Studios, for the Sony Playstation Move, Kung Fu Rider will send you on a wild and whacky ride through the busy Hong Kong Streets as you take on the role of Private detective Toby or his assistant Karin who have been confronted by Triads in Hong Kong.  With no other choice Toby and Karin will need to grab their trusty office chairs and make a dash for it using a variety of Move motion commands to steer, jump, dash, kick, duck, and power dash their way through the city while making sure they avoid the triads and obstacles obstructing their way as they make their daring escape. 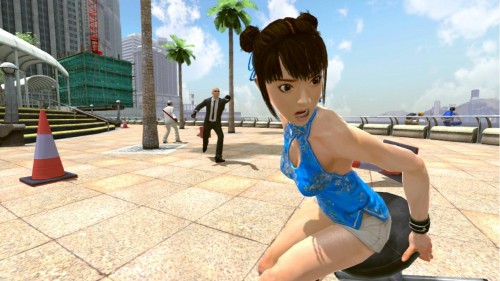 Kung Fu Rider utilizes the Playstation Move motion controller by performing specific commands.  The first mission introduces the player to the control system and provides you with the basics so you can get a feel of how to perform all the moves required to get you through the game.  (The Video review below will explain this in further detail )  The moves are not very complicated to learn and the gestures needed to perform these moves are very straight forward.  Initially like any game it will take you some time to get your head around the Move controls but once you’ve played a few levels you’ll be racing down the busy Hong Streets waving your hands like crazy to dodge boxes, kick triads and ducking under rails like true Kung Fu Master on a chair 😉

The gameplay in Kung Fu Rider feels like a weird mix of Tony Hawk combined with Crazy Taxi with a pinch of Jacky Chan action movies thrown in for good measure.  The Japan Studios have tried hard to create something totally out there and full credit has to be given to them in that department.  Graphically Kung Fu Rider reminds me of Shenmue (I was constantly looking for Ryo riding on his motorbike or walking around the streets) a great amount of detail has gone into creating the levels.  There are a total of 27 in the game scattered around 6 locations, there’s not much variety as most of the streets are very similar and pretty much always consist of the same old obstacles and people.  Crowded streets, and back alley courses filled with objects to manoeuvre around, people, triads and special point bonus pickups that give you a boost to your score and end of level ranking. 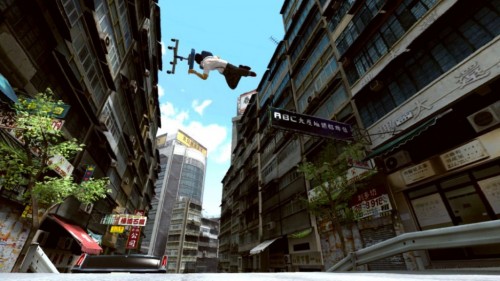 One great thing about Kung Fu Rider is that you have the option to casually race through the level dodging and pick up bonuses when ever possible along the way till you to reach the end or you can HARDCORE and go through many of the special gates as possible and at the same time try and pick up all the bonuses that tally up towards obtaining a super high score.  There’s also special medals that are hidden on specific levels that are not that easy to find, this will certainly keep you busy and coming back for more if you want to find them.

Check out the video review of the game below which will explain in further detail how the motion controls work.  Video review covers the first level of the game that teaches you all the moves needed to get you through the game and a normal stage.

A few features that we would of liked to see but disappointingly are not available is that there’s no online multiplayer.  You will have to content yourself with offline multiplayer which is cool but how fun would it be if you could race your mate on the other site of the world.  Another feature missing is the inability to record your races and upload them for others to see or even better download the top ranking Riders score and see how they did it and possibly race against his ghost. 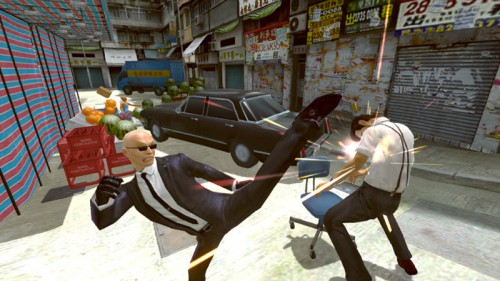 Kung Fu Rider is certainly not something you see every day, gameplay is fast and furious, replay value is there for people that want to prove themselves as the best on the online leaderboards but ultimately once you’ve completed the game there is no reason for you to come back for more unless your mates come around and feel like a bit of crazy Hong Kong action for an hour or two.