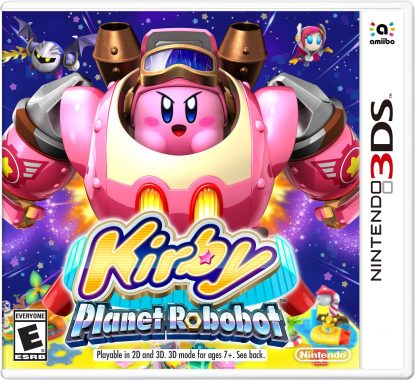 Kirby is a pink ball of charm that Nintendo sneak in nearly every year with a title that almost always delivers a top tier performance. Whether he is re-inventing himself with new mechanics or flapping back to basics, it truly is hard to go into this little mascot’s large heritage and pick out a bad egg, as if any franchise has proved that simplicity sells, it is Kirby. Nintendo have now unleashed Kirby: Planet Robobot for the Nintendo 3DS, which sort of takes what Triple Deluxe gave us and takes it for a new spin – adding in mechanics and extras for a brand new adventure. Is this another thumbs up for the franchise? Let’s find out.

I don’t think I have ever went into a Kirby game without a slight smile once the little narrative begins. You know how it starts, Kirby is relaxing, evil breaks out, allies unite, and adventures begin. That has not changed at all as Robobot keeps those same themes running, and narrative wise – this title may be one of the richer we have seen on handhelds as the story is rather interesting. I am not saying that to undersell those charming little plots of the past, but the story is usually such a background focus in most of the Kirby platformers that is was kind of nice to see it pushed just a little more this time around. 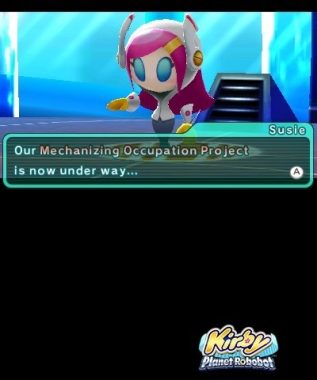 This tale begins with an evil ship called the Access Ark invading Planet Popstar, mechanizing everything in sight and even defeating both Dedede and Meta Knight. Of course it is up to Kirby to take the little planet back, meeting new characters as well as seeing new, robot versions of old friends and foes alike on the way. Yes, it is still a quirky little story, but one that does well at staying at the forefront of the game, making this title feel like more of a cartoon movie compared to the jolly little Kirby platformers of the past where we really just went along with the plot without asking many questions. I personally feel like Triple Deluxe was wonderful – but at the same time a little to familiar, so those who are wanting a Kirby title that still plays the same but feels rather new due to some new artwork and other sorts, you can look no further here.

As with most Kirby platformers out there, there is not a ton of change when it comes to the core gameplay of Planet Robobot. Kirby still can inhale enemies to gain abilities, with his default floats, puffs, and other regular maneuvers continuing to be on full display for the player. I would almost put this title as a direct sequel to Triple Deluxe, as the gameplay feels almost identical in every single way aside from the obvious gimmickry of the mechs themselves. Also returning is the ability to ride stars to go back and forth between the background and foreground, adding a good amount of puzzle solving elements to the rather simplistic gameplay. Sure, this won’t be groundbreaking to returning players, but it does still work fluidly in the newly designed levels. 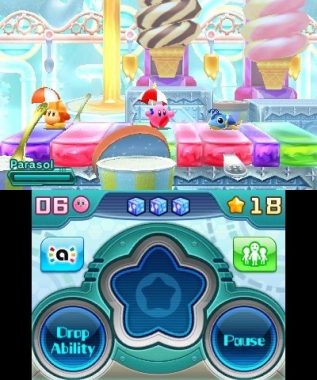 Speaking of level design, there are a lot of new sights to see. While the core mechanics are definitely unchanged, the stages within the game are all themed to go with the new robotic story. A lot of the design is merely just that, a fresh aesthetic for a new game, replacing fauna with cogs and such to go with the overall tale being told. There are some mild changes as the game definitely feels more layered, but aside from a few turned cogs, the big addition here is definitely the mech suit. This hefty suit of armor allows Kirby to hop in and gain strength that allows him to lift heavy objects and destroy obstacles that were once immovable in order to proceed in a level or find a secret. This armor also comes equipped with a scanner, mimicking Kirby’s own ability to copy abilities, but with more power behind the specific technique. 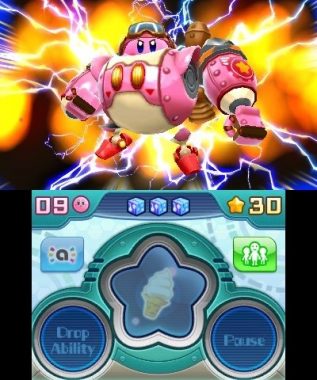 This armor also packs a punch creatively as well, making once standard boss battles into a much more varied affair, with Kirby able to go toe to toe with enemies in air and on land. Sure, that may not sound too exuberant, but believe me when I say that the battles in this title, with mech suit are not are definitely the sweetest and most fulfilling part of this title as a whole. One battle will just be a standard “beat the boss with attacks” type of showdown, while the next will have Kirby piloting a ship in Starfox fashion, aggressively blasting a large foe with a blaze of special attacks. This title may nor re-invent the wheel when it comes to Kirby, but it does add just enough to feel like a fresh, new adventure on its own. 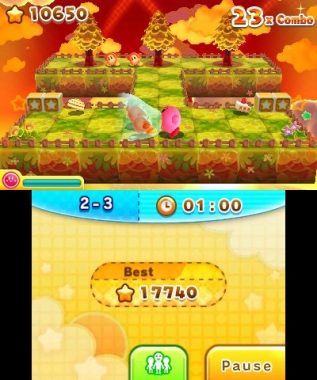 As usual, this title also has side-games, or extra courses if you will – for those who want more out of their adventure. Team Kirby Clash is an RPG hybrid that allows one of four classes to be picked as a squad goes against various bosses from the franchise. Kirby 3D Rumble is a 3D battle where Kirby must clear waves of enemies on a 3D field with his basic attacks. Both of these little games are just fine for something extra and welcome as it stands to an already large adventure overall.

Visually, Kirby: Planet Robobot is sugary sweet in terms of its graphics, bringing together busy worlds with constant animation and blending them with bright and vivid color for yet another treat on the 3DS. You might think that the tones of steel and other themed antics would give us a more bland landscape, but HAL managed to find a way to counter that, creating a fascinatingly beautiful world for this new adventure. 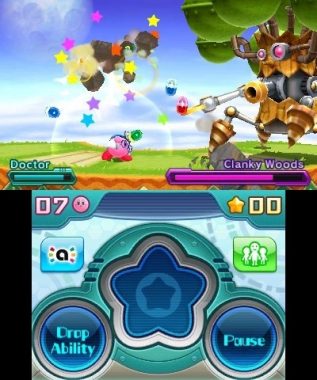 The soundtrack is also wonderful. The melodies are not too far different from that of Triple Deluxe, but they are still pleasant and it is a joy to hear a remixed track that adds in clicks and ticks to go with the new visuals within. Minor sound effects also bring put a lot more, as the mech suit has fitting blurbs to give the player a sense of power as they are obliterating everything in their path.

Kirby: Planet Robobot is not the best Kirby title ever made, it is just simply the next in line. For most franchises that would be a bit of a criticism, but for Kirby – a franchise known for sheer quality, simplicity, and fun, that is a powerful compliment as a follow-up like this simply adds more to the resume for the pink fluff as he powers through this generation. In ways, I would like to see Kirby take some alternative routes like he used to with other genres, but for a rare lack of innovation comes a creation that simply brings another polished tale that keeps Planet Popstar alive and relevant to gamers of all ages.

A follow-up like Kirby: Planet Robobot simply adds more to the resume for the pink fluff as he powers through this generation.
8.5