Kinito is an old Spanish drinking game, involving dice and bluffing. “Kinito: The Game”, is a Wiiware beat-em-up title released by Delirium Studios. “Kinito Ninja”, is a auto-running title for iOS released by Yubi Games. Using the characters and settings from the Wiiware game, along with it’s art and design, Kinito Ninja has a solid foundation to work from; but does it deliver? 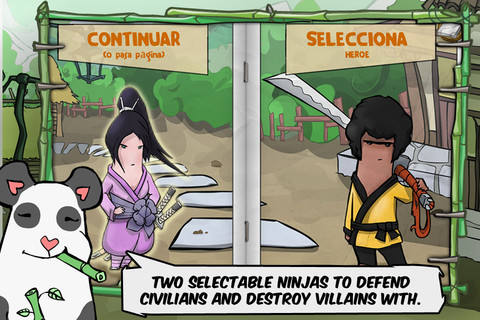 You’re a ninja-person (male or female, your choice), and… you’re running around fighting bad guys? …And jumping over things? With no ability to stop? That’s about as far as the story goes; but then again, it’s a running game, so there’s not much time to stop and look around, ya know?

The level selection is in the form of a comic book or manga, with each page shown in black and white until you unlock it by beating the preceding level, at which point it is revealed in all it’s glorious, colourful beauty. There aren’t any words or even sound effects in this comic; just the poses of our two heroes carrying out their daring do.

So there is some story there. But it’s very… quiet. And not written. And therefore hard to read. 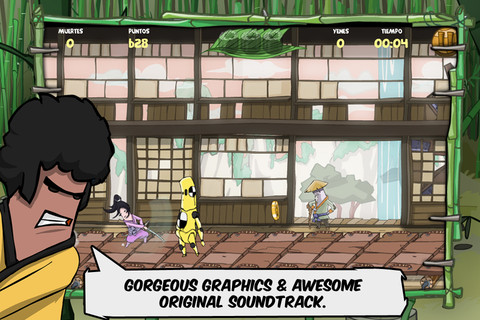 The gameplay is pretty much the same as in any other auto-running game. Your character is running to the right, and you have to make him dodge obstacles, take down enemies, and leap over the inevitable holes in the ground on your way.

The way you do this is to tap on different areas on the screen. There are no visible buttons; the first couple levels guide you through how to use the controls, and a reminder is flashed up every time you start a level. The screen is cut up into 4; giving you 4 moves you can utilise as you play.

Top-left is for jumping and double-jumping, helping you get over obstacles or reach a higher platform, sometimes needed to pick up some of the rarer items available. Bottom-left is for sliding, letting you dodge ranged throwing star (shuriken) attacks, or slide underneath certain obstacles. Bottom-right is for slashing, letting you take out bad guys of varying shapes and sizes. And top-right is for using your special dashing attack, letting you burst through the odd rickety fence in your way. 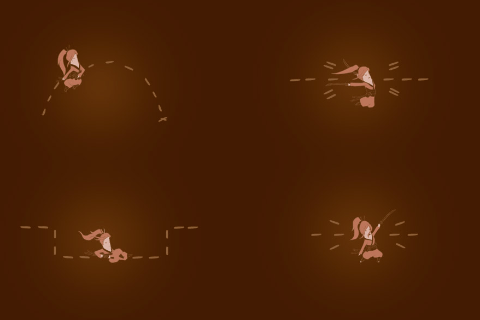 While this control scheme is a great way of keeping the view clear of an array of obscuring buttons, and you are reminded every now and then which  area does what, you may finding yourself tapping the wrong area every now and then, precisely because there are no visible buttons.

Also, the game suffers from a certain pitfall popular among many similar running games. Because the camera is fairly close, and you’re moving pretty fast, you don’t have much time to see what’s coming and react, making the game get real twitchy, real fast. It also means there’s a lot of trial-and-error to the game, requiring you to memorise a series of moves and timings to make it through a level. The levels, of course, growing in complexity and length, as well as introducing new enemies, exacerbates the problem. Once you get onto the harder levels, you’ll be spending most of your time playing the same parts of a level over and over, glimpsing just one or two more obstacles before dying and starting from the beginning of the level again. 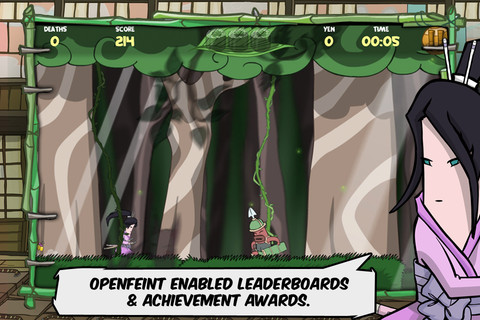 Now, if you’re a fan of the running genre, this may not phase you. This may even be the aspect of such games that you love. And if that is the case, then you will likely love this game too.

Along the way, you’ll be earning yen by dodging obstacles and people, or taking out enemies. There are also a number of shiny coins you can pick up in each level, adding to this score. Another pick up is the sushi roll. These are used to perform your dashing attack, and you can hold up to 3 at a time. The most important pickup, however, are the Relics. These are little golden statues of a number of varieties.

From what I can see, though, the yen, sushi rolls, and even Relics don’t actually affect the gameplay; they’re more of a completion indicator that anything. 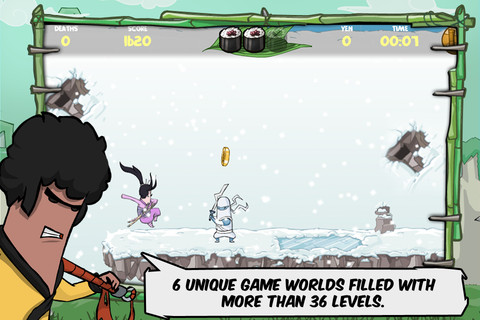 The art style in this game is very reminiscent of flash games; everything being vector art, with a cartoony vibe to the world. It looks great. The character design, too, is pretty cool. The girl looks like a geisha-samurai type, and the guy looks like someone straight out of Afro Samurai. It looks like everything was taken straight from it’s Wii predecessor, but as the original material was so cool, heavily borrowing from it isn’t that bad.

The music is nice and oriental, as expected, and the sound effects are larger than life, accentuating each move and reaction nicely. 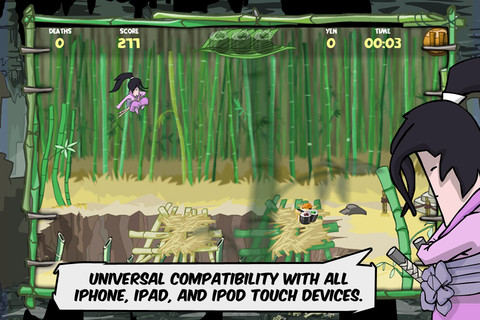 If you’re a fan of the auto-running genre of games, then you’ll love this one. But if you’re like me, and get sick of the constant replaying of the same 2 minute chunk of a level, then, just like those other auto-running games, you’ll just get frustrated.