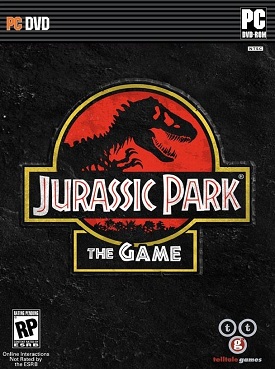 Overview
Having grown up with Jurassic Park, both as films and games, I’ve been pretty excited for Telltale’s take on the franchise since I first heard about it – especially as the trailers showed some pretty epic moments of dinosaur-on-dinosaur action. The trailers only seemed to show segments of cutscenes though, and as I ached to see some gameplay footage, it slowly dawned on me that what was shown WAS gameplay.

Yes, it’s made up of almost 100% Quick Time Events, like the extinct FMV genre of the early 90s. What this means, for the uninitiated, is that gameplay consists almost solely of watching a cutscene, and waiting for a prompt to tell you which key to press to keep the story going.

Despite the awful gameplay, there’s actually a pretty good story in there, with surprisingly well-developed characters and epic action moments. And it’s actually worth enduring this movie/game bastard child for the story, the tense dinosaur encounters, and a deeper understanding of what happened that fateful weekend. 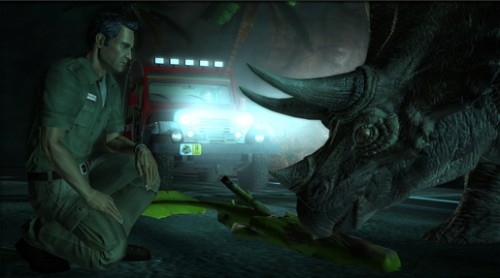 Story
The game’s story ties into that of the original Jurassic Park film, but follows different characters and a different timeline. As you remember, the film centres on a zoo of sorts, where dinosaurs have been resurrected through genetic engineering. And of course, everything fails.

The park’s failing is largely due to Dennis Nedry, the park IT guy who is hired by a rival company to briefly shut down security, steal frozen dinosaur embryos and relay them to a ship waiting in the docks before anyone knows what’s happened. But Nedry is killed en route, and with the power off indefinitely, the park plunges into chaos.

The game focuses on several new characters, including Nima, a mercenary sent to ensure the embryos reach their destination. When Nedry fails to show up at the docks, Nima has to head inland to retrieve them, without being told what the park actually contains. After tracking Nedry’s jeep and retrieving the embryos, Nima is bitten by an unknown venomous creature, and collapses just as another jeep passes by on its way out. 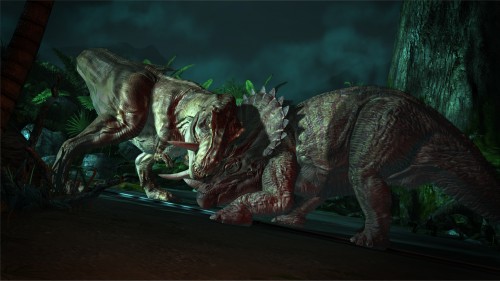 Driving that jeep is the park veterinarian, Gerry Harding and his daughter Jess, who pick Nima up and attempt to take her to safety. After several close encounters, including an epic T-Rex vs. Triceratops battle, Nima’s wounds are dressed and she regains consciousness. It’s understandably difficult to explain her intended espionage to employees of the targeted company, and taking the official evacuation route would certainly end with her arrest, so Nima makes a snap decision: she takes Gerry and Jess hostage, and marches them towards the North Docks, where her contact is still waiting.

Meanwhile, InGen, the company behind Jurassic Park, have sent in a team of mercenaries to evacuate the remaining personnel. They track Gerry and Jess, attempting to rescue them from an increasingly desperate Nima, and an island full of prehistoric dangers.

All up, the story is compelling, and the characters are quite well drawn. Your sympathies change repeatedly, so that at different times you “control” and associate with Nima, Gerry, Jess, the mercenaries, and Dr Laura Sorkin, a disgruntled InGen geneticist who devotes her time to “dinosaur rights”.

Telltale have described the game as character-driven, and it is. There’s the dysfunctional father-daughter relationship between Gerry and Jess, Nima’s personal dilemma as she questions her employers and whether she’s doing the right thing, and just how dedicated Dr. Sorkin is to preserving the dinosaur specimens in the park. The dynamics between characters are quite cinematic in nature, as alliances form and break apart, motives change, and of course, a few casualties thin the survivor herd.

The main problem with the game’s narrative is its ruthless linearity. The story itself works, but while the game borrows some gameplay elements from the likes of Heavy Rain – although not implemented nearly as well – it doesn’t carry across the branching storyline or multiple consequences of the characters’ actions. 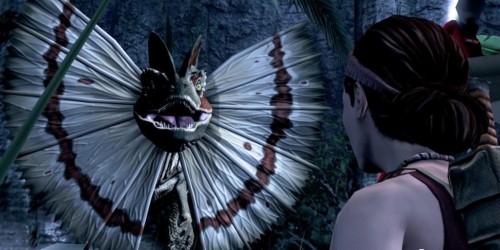 Gameplay
You don’t play Jurassic Park so much as you watch it, periodically tapping buttons to keep the 7-hour cutscene going. As mentioned, Heavy Rain’s influence is obvious in the cinematic presentation of the game and much of its gameplay mechanics. Unfortunately, many elements that make Heavy Rain so compelling are left behind, and all that’s brought to Jurassic Park are the adopted ginger kids of game mechanics – Quick Time Events.

QTEs have worked well in the past. Resident Evil 4, for example, contained some clever sequences that use them to add tension. At one point, Leon and some bad guy from his past are circling each other, facing off verbally. But periodically he’ll lunge at you, and you have to be ready to tap a button to dodge. It added tension to an already tense scene, but was a small part of the overall game.

In Jurassic Park, QTEs form the vast majority of the gameplay. To escape a Raptor, tap Right. To climb a ladder, tap Up. You might need to tap a few keys in a set order, or click and move the mouse in a certain direction, but it’s never more challenging or interesting than that.

The connection between your input and the character’s actions on screen is wider than I’ve seen in a game for a long time. The closest it might get is feeling your character’s exhaustion through hand cramps as you rapidly tap Right to keep them running. And that’s sadly not even the worst of it. 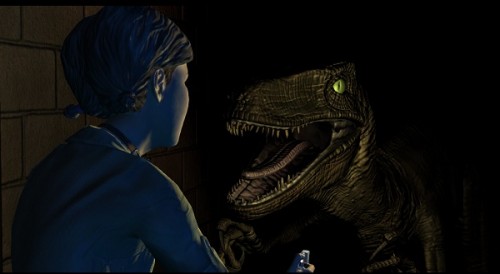 Fail a QTE, and your punishment is either a swift death or absolutely nothing. A misstep in the sequence might result in your character failing to avoid the jaws of the T-Rex chasing you down, but just as often it will result in you making it to safety with a lower score for the scene. In this kind of game, nobody gives a compsognathus’ ass about what score they get. A game that allows players to progress while doing nothing for five to ten minutes at a time is fundamentally flawed.

During calmer scenes, the character will stand still and you move the camera around them. Then it’s simply a matter of clicking all the obvious items of interest in the scene, marked by big unsightly looking glass or hand icons, until one of them pushes the scene along. There are rare and very straightforward puzzles, but they’re well below Telltale’s own standard.

In fact, very few of Telltale’s usual adventure game elements made it into the game, which is a damn shame. Their handling of the Back To The Future property earlier this year was quite well done, and I was hoping for the same kind of treatment. Notable absentees in Jurassic Park include exploration, and that staple of adventure games – an inventory – resulting in no item-based puzzles or gameplay. 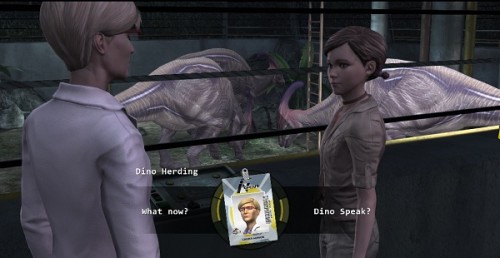 Visuals & Audio
When Telltale called this a cinematic experience, they were spot on. At the expense of the gameplay (lamented above), the camera can pretty much do whatever it wants and not interfere with the player’s limited input. It’s good to see that it’s used properly, with the camera always well-placed to capture the action.

The dinosaurs of the original Jurassic Park movie were impressive, and they still hold up today. This is the best they’ve ever looked in a game, and although their animations can be a little clunky and stiff at times, overall they look just like their film counterparts. The human characters look pretty good too, their facial animations conveying the appropriate emotions well.

The voice acting is decent as well, but the real stars in the audio department are the dinosaurs. Much of their character from the films is communicated through their iconic “voices”, and these are kept perfectly intact. The birdlike chirping of the dilophosaurus, the complicated language of snarls and barks of the velociraptors, and the fearsome bellow of the T-Rex, all really add to the believability of these prehistoric creatures. 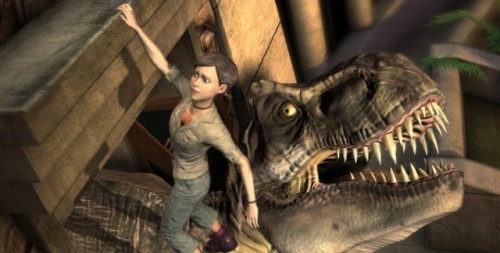 Overall
If the story and visuals weren’t so polished, the gameplay would be too much of a drag and make me feel guilty for recommending the game . As it stands though, it’s quite boring to play, but the story, characters, action sequences and presentation make the journey worth the effort. It’s just a shame no one told Telltale they were making a game, not a movie. Still, it’s better than Jurassic Park III.