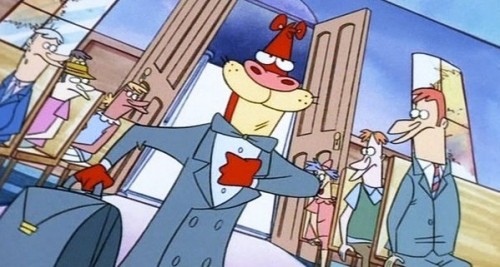 I wonder how many people remember this little number from their cartoon-dominated childhoods? Like many of the other Cartoon Network series that appeared in the prime-time “Cartoon-Cartoon” line-up, ‘I am Weasel’ has also found itself subject for re-release on DVD, courtesy of Madman Entertainment. This particular series was run originally between 1997 and 2000 during a time in which my growing brain was at its most receptive to cartoons, at the ages of 8-11. Originally provided as a spin-off series to the more mainstream show ‘Cow and Chicken’, ‘I am Weasel’ eventually established itself as its own series, but sharing in a similar art style and form of intended humour.

‘Meet I.M. Weasel: a famous, generous, caring being who is extremely gifted, talented and skilled in most professions. Now meet I.R. Baboon: an untalented, ugly, erratic being, who is only noteworthy for his bright red butt, which he  refuses to cover at any time much to the discomfort of those around him. Despite I.M. Weasel’s benevolent nature, I.R. Baboon is constantly trying to out-do him and constantly failing to do so’ – DVD Blurb.

So, should we be excited for this? That depends. As with any other re-release, the true test of a great nostalgic show is to see if it has aged well over the time period in which it has been absent. Was the show well written, and well produced enough to stand the test of time, and still hold its appeal to modern audiences? Or will it suffer from its former audiences out-growing the style of humour and appeal?

Just as I remember watching it on Cartoon Network about a decade ago, the show features no sequential or ongoing plot. The best way to describe it would be as a collection of cartoon shorts. The show’s original purpose as a set of filler episodes for ‘Cow and Chicken’ is all too clear. Each individual episode on the DVD is broken into 3 different short stories, spanning an average of about 7 minutes each. These individual stories are separated by short, less-than-a-minute filler bits that I recall being used to advertise the show during commercial breaks when it was still being aired on CN. 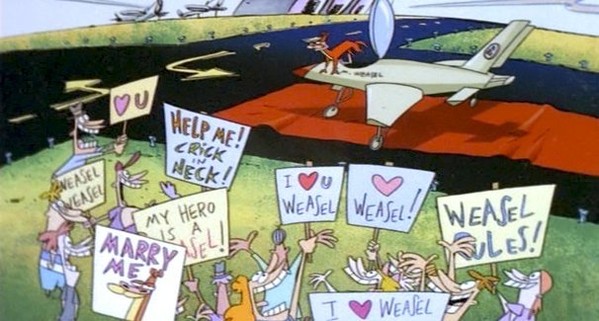 The basic ongoing plot tends to revolve around the two main characters: I.M. Weasel and I.R. Baboon. A majority of the episodes shown in the volume 1 collection, (and as I recall throughout the entire series) involves the latter protagonist consistantly attempting to out-perform his better educated colleague. More often than not, Baboon’s actions or stupidity act as the catalyst for conflict in the story. As each short is divided down into a 7 minute tid-bit, it is understandable why there is a lack of ongoing plot or character development. The show often addresses significant moments in history, or significant cultural phenomenon’s, but puts a unique spin on them, by adding a highly educated rodent, and a just plain stupid monkey to the mix. However, the show’s roots as filler intended for ‘Cow and Chicken’ is painfully obvious.

On that note, it really must be said that watching this entire series just feels like watching nothing but filler. Heck, the filler even has filler. And while the show does have its funny or laughable moments, many of the jokes have just not aged well. The repetitive nature of instigation and conflicts becomes difficult to bear after watching a few episodes. On a positive note however, due to the non-linear nature of the show, every episode does feel significantly different, and viewers will feel like being shown a new experience or adventure with every viewing.

In the whole series, there are only really 3 characters worth noting: 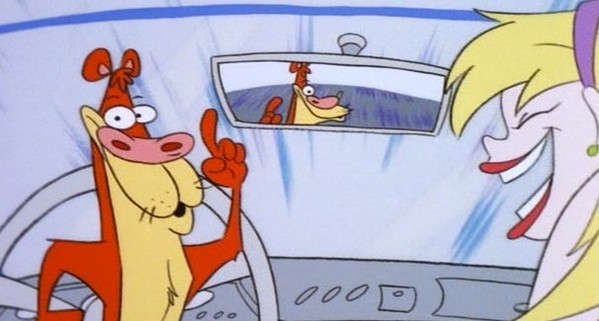 I am Weasel is supposed to be the relatable protagonist of the series. He’s quick-witted, smart, logical and skilled at every field he applies himself too. Something of a perfectionist. That said, it should be noted that this degree of skill and logic is partially attributed to the generic stupidity of the rest of the cast, including bystander and extra characters. As far as the plot of each short story is concerned, Weasel exists generally as a way to solve the problems that I.R creates for himself, or for the rest of the world. Occasionally however, his relative smarts make him worse off for it. For example, in the first episode “I R Terraformer” Weasel finds himself at a depressed loss when his efforts to create a space colony are rendered moot by termites. As a viewer we know that Weasel will attempt to fix a problem, but occasionally his self-righteousness can get in the way of real progress. Although he is respectable for his selflessness, overall he is not exactly an entertaining or overly appealing character. This is mostly due to the “holier than thou” role he portrays. 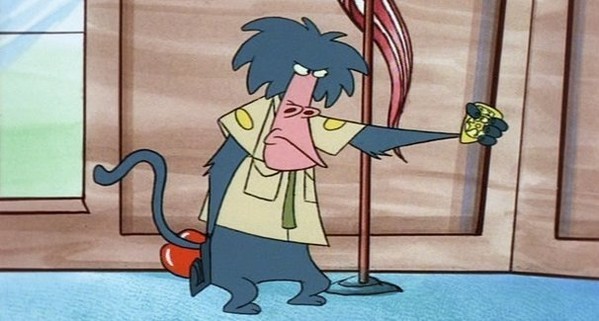 In all honesty, I.R is probably the single reason why people would choose to watch the show. His stupidity clearly knows no bounds, and his constant drive to out-perform Weasel will often end up coming right back and hitting him in the face. Sometimes literally. However, in terms of entertainment value, Baboon is the most appealing character to watch. We’re never really told why he feels this compulsive need to prove himself, but the show feels richer for it. While we know he is stupid, and his bright red butt gets difficult to look at for extended periods, his idiotic nature combined with his ambitious goals in life make for entertaining, even funny viewing. And I will be honest, I do enjoy the idea of someone actually being able to kick Weasel of his “high and mighty” pedestal. So much so that one almost wants Baboon to succeed sometimes. Referring back to the “I R Terraformer” episode, I.R’s stupidity does not let him see the tragedy for what it is, and thus, he feels better off for it. Proving once and for all that ignorance is bliss. And he will get you quoting “You talking to I.R?” again at some point. 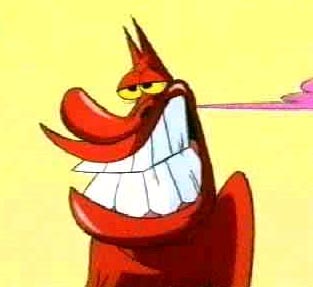 A character that one would also recognise as the main antagonist in the ‘Cow and Chicken’ series, the Red Guy, also referred to as (I.B Red Guy or Ben Pantsed) is a flamboyant red devil like character that exists to either torment, antagonise or act as a catalyst for some of the craziness that this show endures. Like Baboon, the Red Guy rarely covers his rear, and is not the brightest tool in the shed. The Red Guy character is consistantly changing in terms of persona being covered, from male to female roles, and from good, evil, neutral, smart and stupid roles. Every time the Red Guy brings something new to the episode. From watching the show again after an almost 10 year hiatus, some of the Red Guys flamboyant tendencies will make viewers seriously consider questions of sexuality, and appropriateness for the age group. For instance, what do you think he’s talking about when he says “There are some places you should NEVER get a splinter” when referring to wooden pants. While it’s true splinters in some places are nastier than others, this character begins to raise questions again and again as to what the heck he is even doing in a children’s cartoon.

The art style of the show is pretty typical of what one would expect from a cartoon developed in the late 90’s. The animation is created with colour and a significant degree of unique flair. However, the visual aspects of many jokes begin to seem juvenile or un-entertaining for an adult to watch. While a child may be fascinated by the idea of seeing butts, general toilet humour and numerous grotesque sights, to an adult viewer, the visual style no longer appeals. 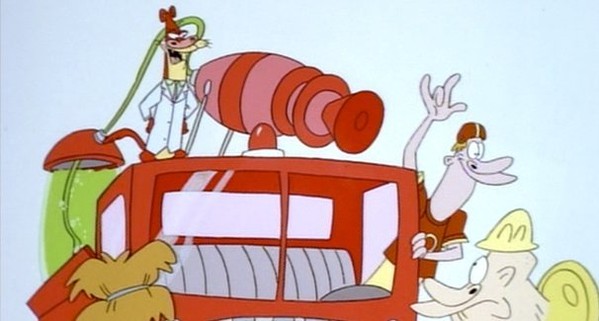 It’s worth mentioning that the music of the show stands out. The score is often well appropriated to the situation and achieves its purpose of reinforcing the viewer’s reactions to certain stimuli. The theme song itself is a strange remix of “Pop goes the weasel” which is actually surprisingly catchy. Even to this day, I still remember the show’s opening song about not needing pants for a victory dance. Sound effects however are a different matter. Many of the slapstick comedy elements are the same recycled sounds that we’ve seen in a dozen Looney Tunes cartoons, as well as the numerous other “cartoon cartoon” shows available in the same time period. To add to that, the voice acting and dialogue just seems rushed and no longer provides the same sense of humour to an adult that it would to a child. 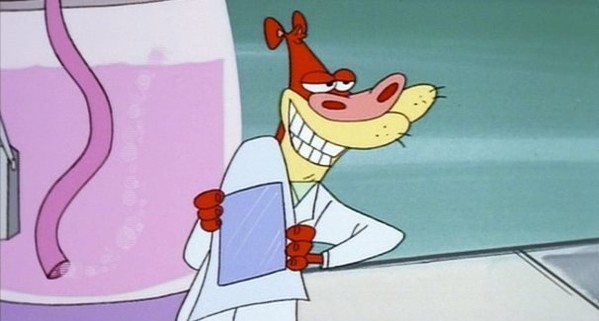 It must be said that as a cartoon series, ‘I am Weasel’ has not aged particularly well. The jokes that one may or may not have enjoyed as a child are no longer funny, and the raw appeal of the cartoon genre is not perpetuated due to quirky, awkward visuals, unintelligent humour and short overall runtime. This is most certainly a show for children, to be enjoyed by children. Let’s face it, at that age range, butt jokes, toilet humour, and general disgustingness and awkwardness can only really be enjoyed by the young folk. Watching this show again made me remember why I sometimes preferred to watch sports shows and anime. Going back to watch it again may very well ruin some of the nostalgia you carry for it. That said however, it is still a decent enough cartoon to watch in short controlled bursts for a 5-10 minute dose of fun viewing.