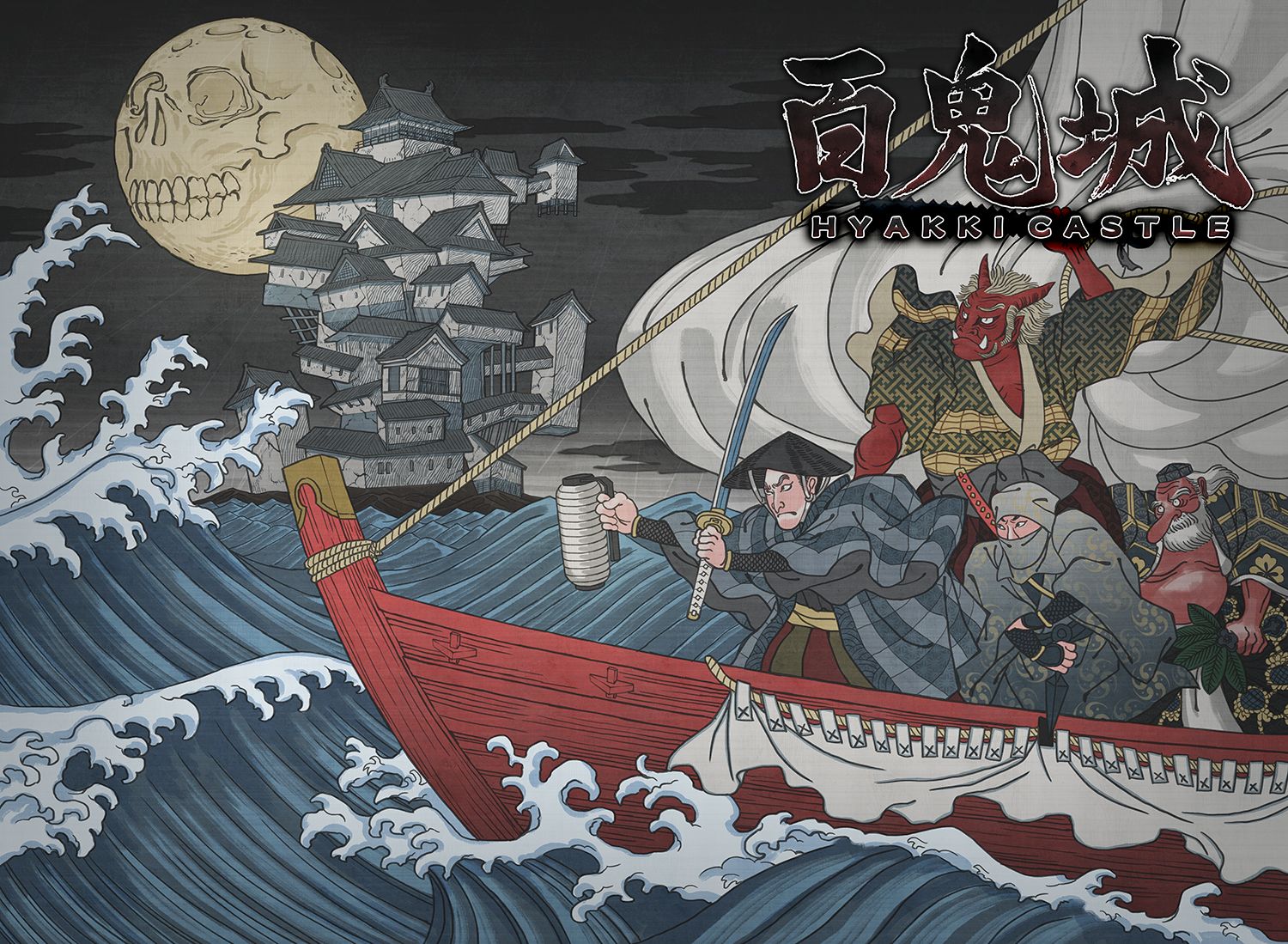 Hyakki Castle is a real time 3D take on the classic first person dungeon crawler from Japanese developers Asakusa Studios. The game is set in a world rich with Japanese culture, with classes inspired by Japanese warriors and monsters from Japanese literature. Players will build a party of up to four characters and climb the tower in hopes of defeating the evil sorcerer Doman Kigata.

Hyakki Castle is not a narrative driven game. Instead, the plot serves as window dressing that gives the player’s actions some context. The writing is rather poor due to how the story is told. Instead of moving the plot forward in small, cohesive chunks, players will get a line or two pop up during exploration. The broken nature and low quantity of the writing makes it difficult to get invested in the story. 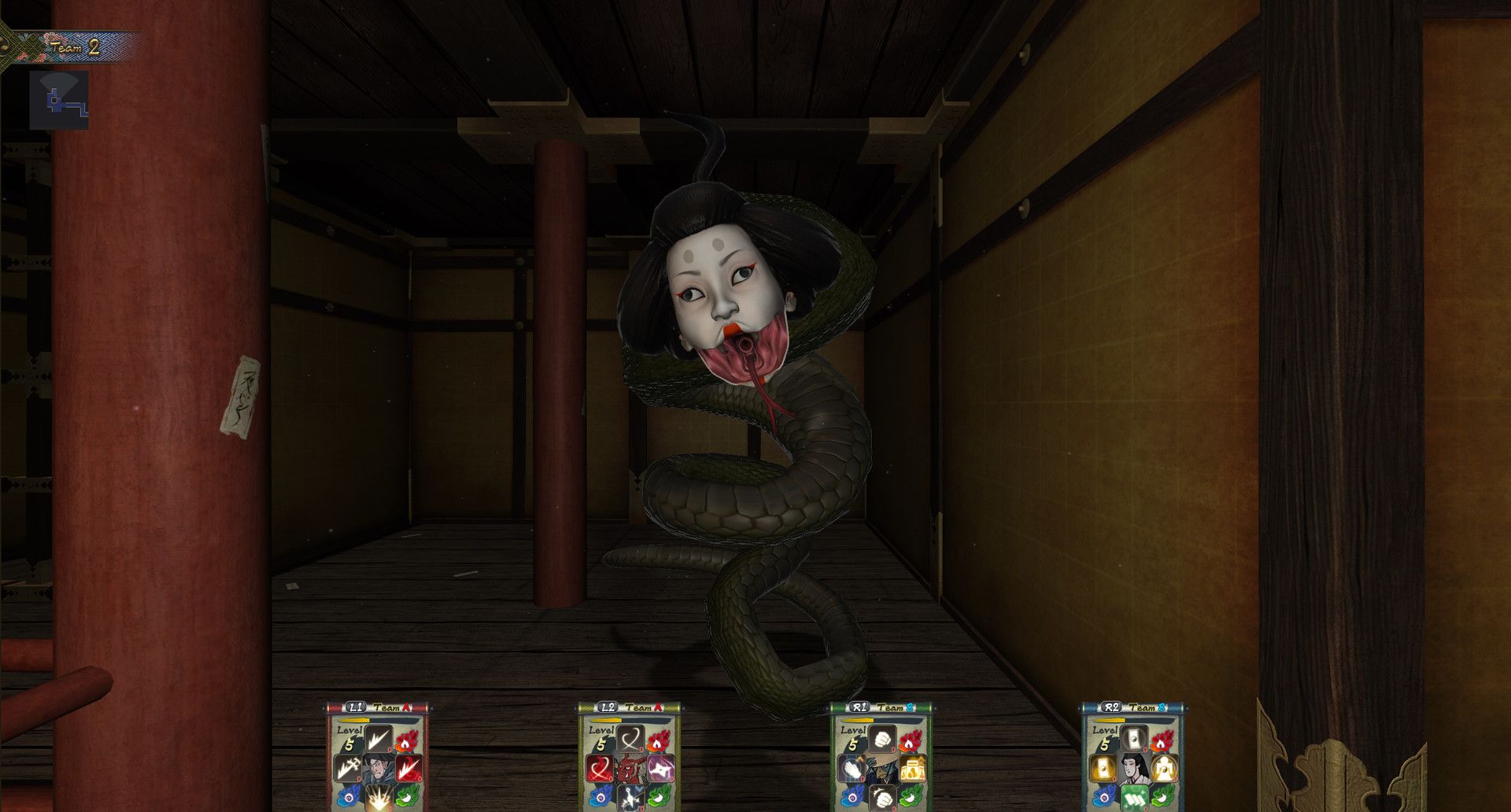 Hyakki Castle is a modernized take on old school dungeon crawlers, in the same vein as the indie hit Legend of Grimrock series. Players start off by creating four characters from the available pool of four classes and four races in the game. Each character can equip up to four skills or consumable combat items at a time. Character management is an incredibly simple and bare bones affair. The only choices players can make is equipping their characters with new gear and purchasing active skills from the skill tree, as stat points are handled automatically by the game.

The level design is very dull. I can sum up almost every level as a chain of find the key puzzles that involve usually require finding and throwing a series of switches. The touted party splitting option is pretty useless beyond solving the handful of puzzles that requires one party to hold down one switch while the other party finds the other switch to stand on. Some puzzle elements are an instant death in the early game, which is annoying in its own right, but to make matters even more frustrating, dying sends the player back to the last save point that are located at the beginning of each level. 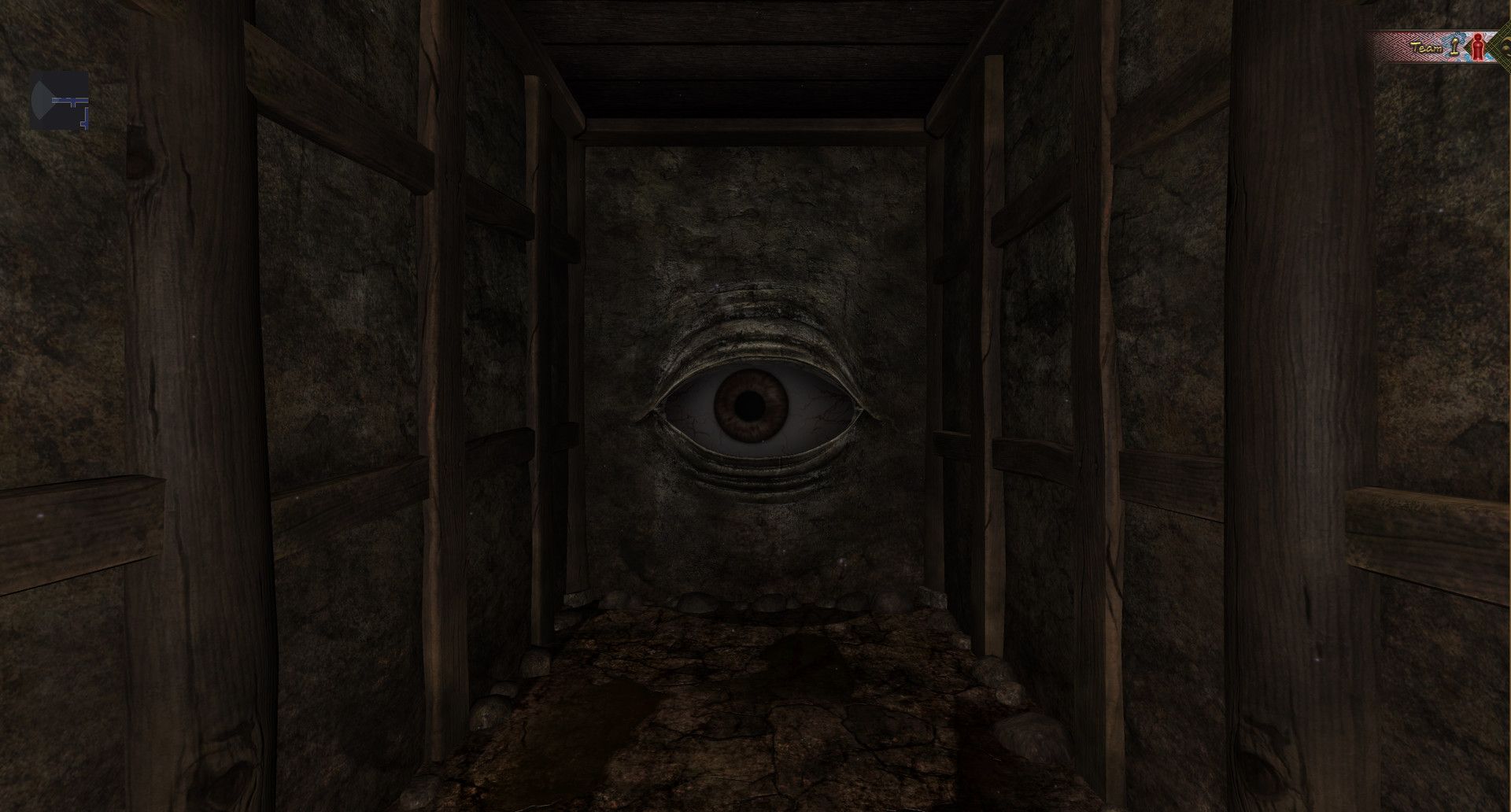 The game uses a hunger system that limits the player’s mobility. Every tile the character moves eats away at the hunger bar, which must be topped off with food that players find. If the player can find enough collectibles in the game, the hunger system gets halved and eventually ditched all together. The system is a poor idea. There is a limited number of food items in each level, which technically means if a player is really stuck on a puzzle, they are toast. It discourages exploration, which is needed to negate the hunger system in the first place. It seems like the system is just a poorly thought out idea that should have been dropped all together.

Hyakki Castle’s combat is lack lustre. For the most part, there is little strategy involved. Some creatures have elemental weaknesses that can be exploited, but for the most part, the best strategy is to hammer away with as much damage as possible in the shortest period of time. Most creatures do a low amount of damage that the monk can easily out heal. If the player has tanking abilities, then most incoming damage is negligible. The real frustrating part of Hyakki Castle is that some enemies have a one shot kill that gets a short, telegraphed animation that has to be completely sidestepped to dodge. Splitting a party to flank an enemy is pointless between the preferred tactic of dumping as much damage on an enemy as possible and the need to dodge certain attacks to avoid being one shot. It’s just not worth the time to maneuver each party into position separately. The bipolar nature of combat that swings from whatever to flip the table rage isn’t fun in a masochistic Dark Souls sort of way; it’s just not fun at all. 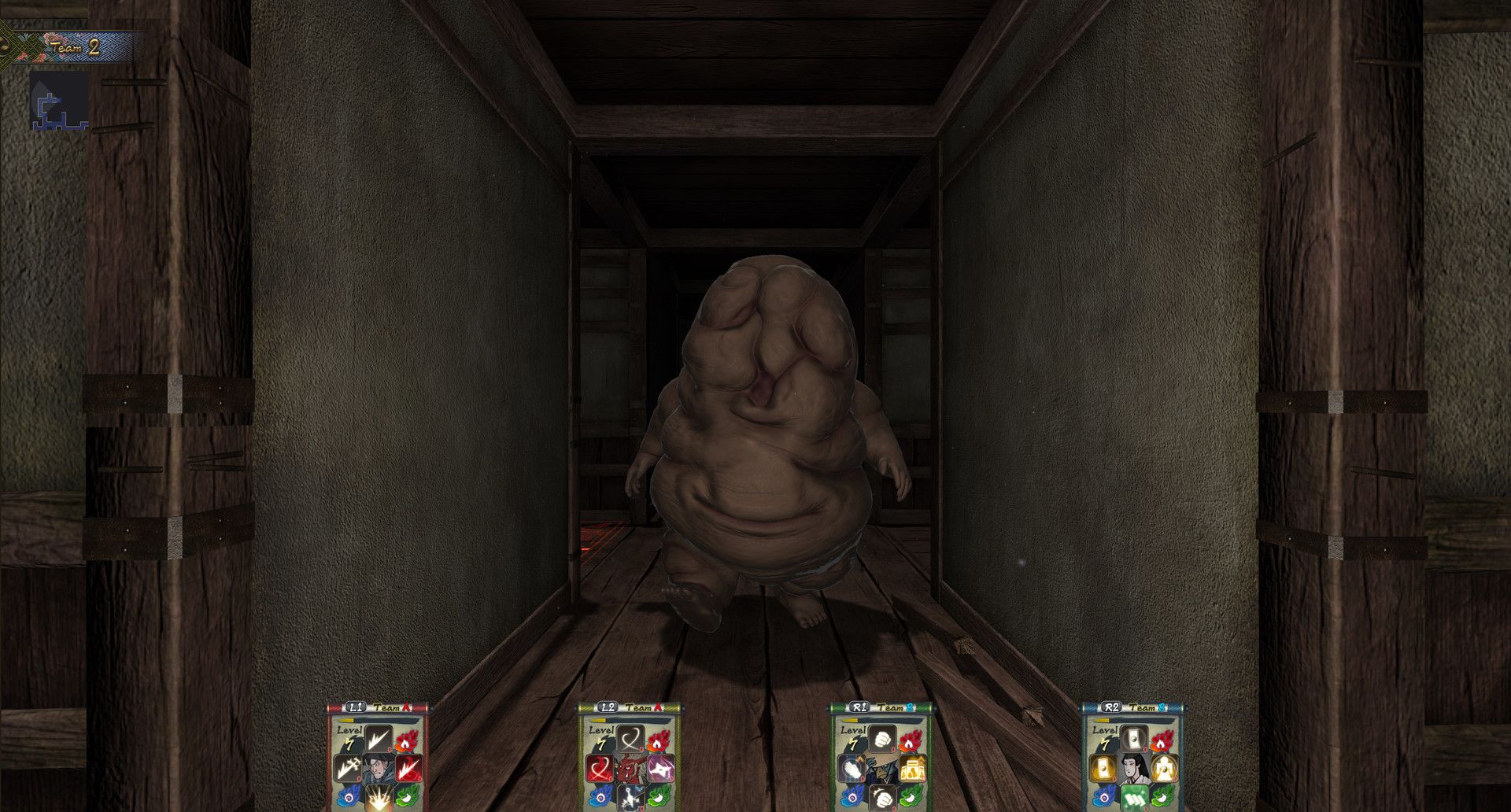 The game supports both mouse and keyboard and controllers. Hyakki Castle does not stray far from the standard control scheme for first person dungeon crawlers, but the limited skill set for each character is designed to accommodate the limited number of face buttons on the controllers. While the controls themselves do not cause any problems, the user experience is awful. There is no tutorial in the game, just some hints nailed to the wall and a handful of slides explaining the game’s basic function buried deep in the menus. Each character has its own box on the bottom of the screen that blocks the view of the next square, which makes navigating through puzzles involving spike traps a pain. The equipment menu navigation is a direct port of the controller functions, so normal PC menu behaviour like hitting escape to close any menu or drag and drop is not supported. This may be a cultural issue, but I noticed positive increases in stats are marked with red, while losses are marked in blue. The touted two party system is also handled poorly. Splitting the party into two groups switches into a splitscreen mode, which eliminates any peripheral vision. I would have also liked for parties to automatically merge when they share the same square, instead of having to combine them manually. It’s a small quality of life feature that would improve the system dramatically.

The game is not particularly polished either. I encountered multiple instances where the player is spawned in or teleported right in front of an instant death ability. I also found enemies occasionally getting trapped in walls, making them impossible to hit without a ranged attack. Additionally, the load times are monstrously long, easily competing with complex AAA titles. 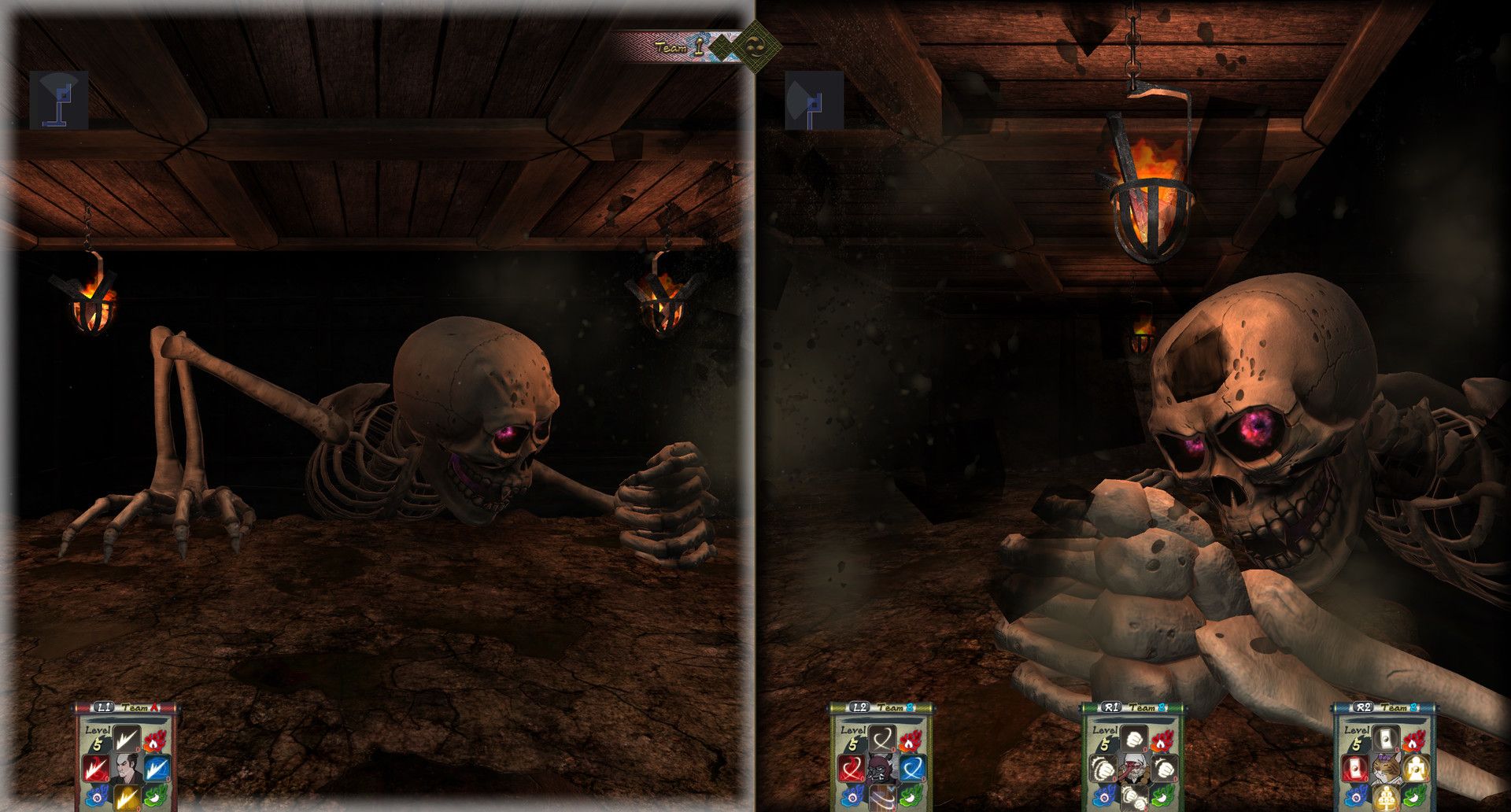 Hyakki Castle is a visually boring game. Each themed area has only one or two wall tiles, a few floor tiles, and a handful of objects accenting the area. As a result, levels tend to blur together, making the map the only good visually reliable way to navigate the levels. I like the general art style of the game as it stays true to traditional Japanese illustrations, but it can’t compensate for the repetitiveness of the environment. Additionally, there is no separate model for each team. Instead, they are represented by a red and blue board game token in the vague shape of a human. It feels lazy and breaks the immersion of the game. On the technical side, the graphic options are abysmal. There is only options for the game to run in windows and full screen mode. The UI is only optimized for 720p, so the menus will be upscaled with a noticeable blur for most modern monitors. 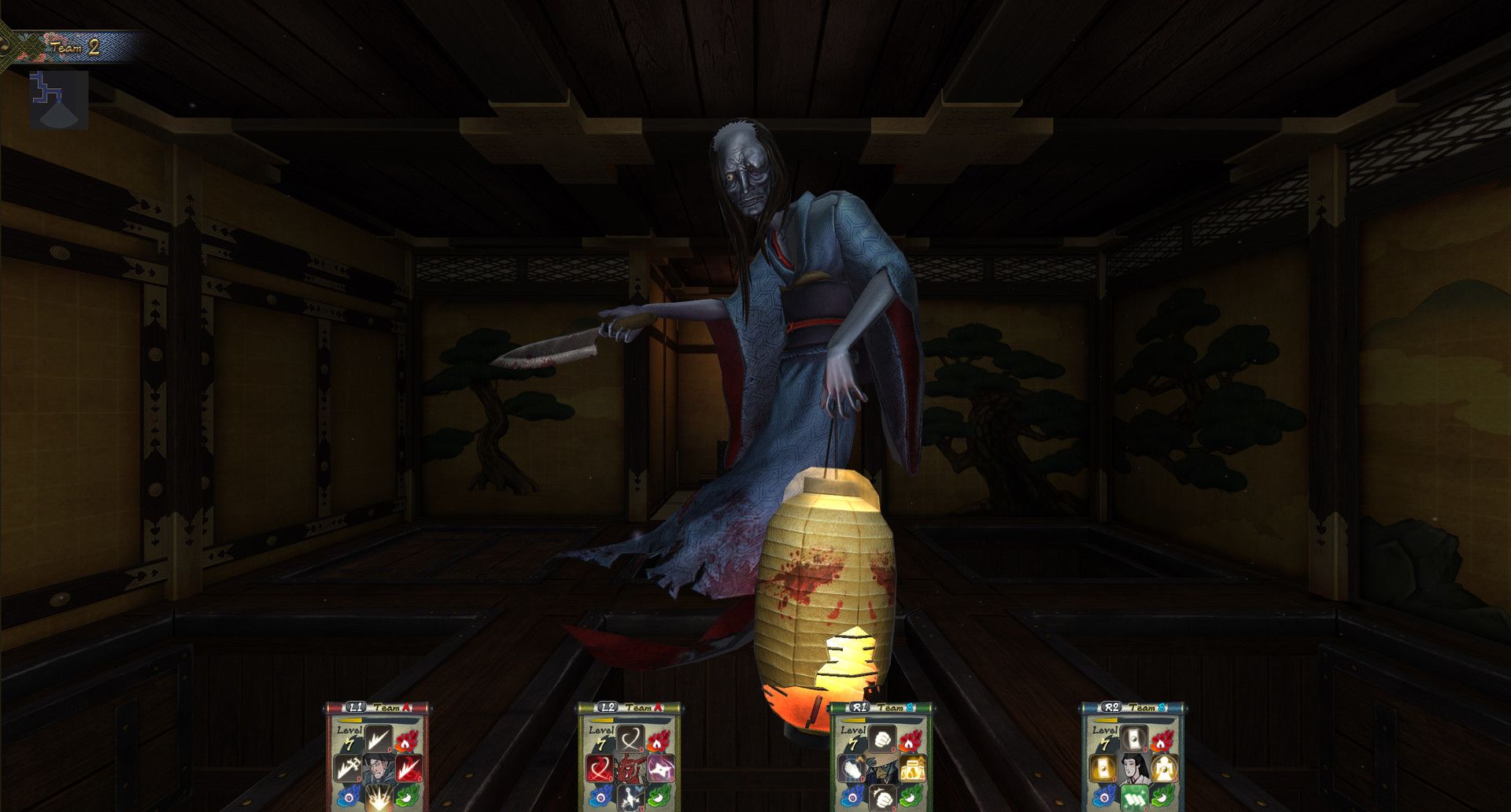 Hyakki Castle’s voice acting is only in Japanese. Although I won’t call myself an expert in Japanese acting quality, it sounds like the standard voice acting in any major anime title. The voice lines for attacks are a bit repetitive as there is only one for each, making combat a spamfest of the same handful of lines. The sound effects are rather generic. The engine does not handle directional sound well, as a sound effect emitted by a nearby object will sound the same with or without a wall in between the object and the player. The soundtrack is generally non-existent, but what little music is there is nice traditional-style Japanese music. 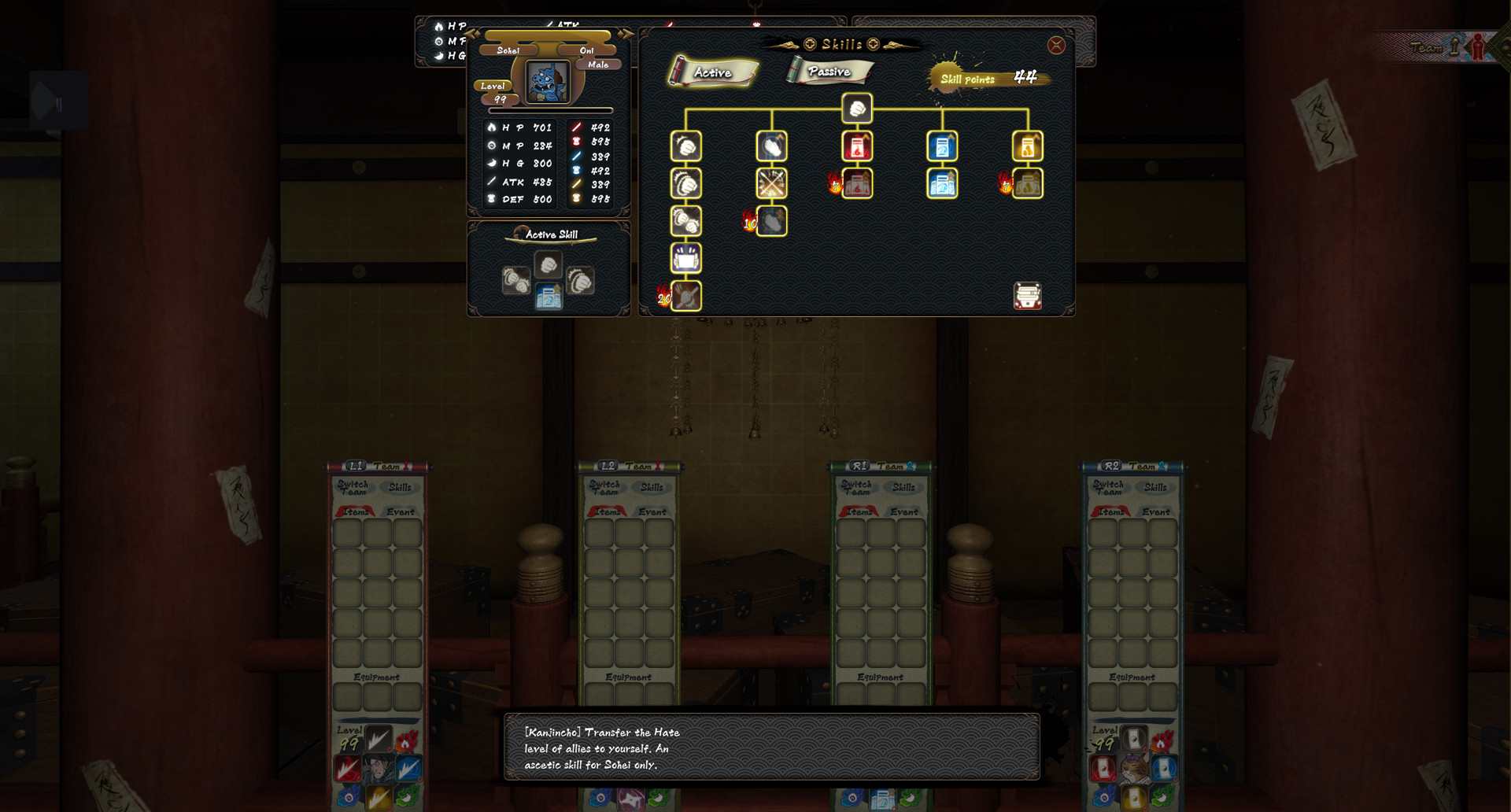 Hyakki Castle is trying to bring the old school dungeon crawler back to a new generation of gamers. The problem lies in the fact the game ranges from sleep inducing boredom due to repetition to table flipping frustration because of  instant deaths that are followed by long walks from the beginning of the level. To make matters worse, the game has a lack lustre presentation that makes Hyakki Castle feel like a bad, outdated port. There is room for old school, first person dungeon crawlers to make a come back on the market, but Hyakki Castle is not destined to fill that space.

A dull, repetitive first person dungeon crawler that breaks the monotony with frustrating one shot deaths.
4