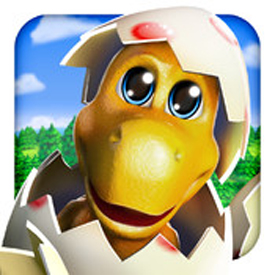 Happy Dinos is at its core a park building game in the vein of Simpsons Tapped Out, or Smurfs Village. You need to build and maintain your dinosaur park, while breeding and training your adorable reptilian attractions. Through breeding and trading with friends, there are 1000s of dinosaurs available, so that even the most avid completionist will have a hard time finishing their collection. Some of the gameplay is a little sluggish, and there isn’t much to ‘wow’ the player here, but it is a fun experience none the less. 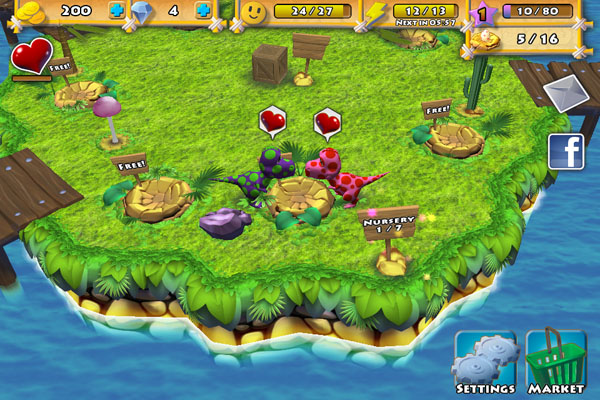 Happy Dino puts you in the role of a Dinosaur Park Manager, whose job is (you guessed it) manage a dinosaur park. Part of managing the park includes the breeding and training of dinosaurs, as well as building and maintaining their habitats. Happy Dinos plays a lot like other town-building games like; Simpsons Tapped Out or Smurfs Village, where your goal is to try and make your dinosaur park the best it can be by placing decorations, habitats and other items to improve its look and overall charm.

While the park-building is the game’s core, its  focus is easily its dinosaur breeding system. You are given a variety of different coloured and differently designed dinosaurs, and through breeding you will create more, and unique dinosaurs to fill your park. When breeding, you are told what potential dinosaurs you might end up with, but it isn’t until the eggs are hatched and the little one steps forth that you will know for sure. The game has 1000s of dinosaurs and each has its own rarity, so even the most hardcore completionist will struggle to overcome this game. 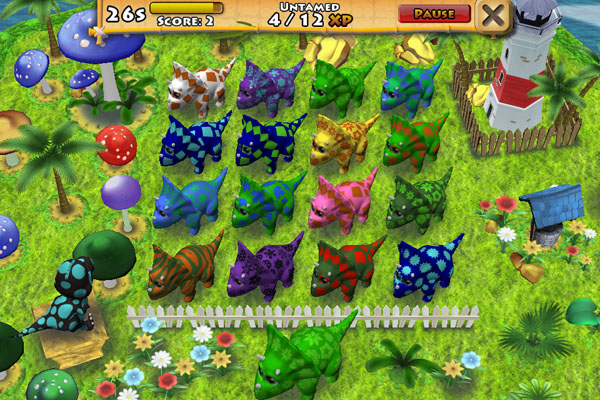 After you have given birth to a new dinosaur, you are able to tame them and then teach them tricks. Taming them allows your dinosaur to breed and to be an active part of the park; showing off its tricks and performing a few other tasks. To tame and train your dinosaurs you will play one of four mini games with them. The further you get in these mini games will equate to how much you have trained your dinosaur. It typically takes from 1-2 attempts at a game to have your dinosaur fully trained.

The mini games are relatively simple; an auto-runner where you tap the sides of the screen to move your dino that direction, a match-pairs game, a fruit ninja clone, and another auto runner where tapping the screen causes your dino to jump over obstacles. Each game lasts about thirty seconds, and they would all be fun enough if not for sluggish and unresponsive controls that never quite seem to work properly. These lackluster controls very quickly turn these short bursts of fun into monotonous and frustrating exercises. 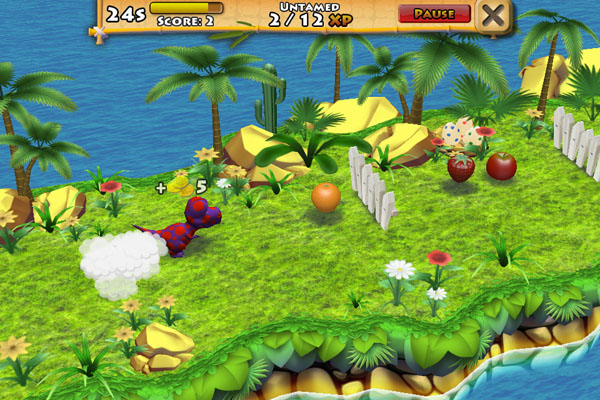 Alongside breeding and training your dinosaurs, you are also tasked with the duty of making sure they are always happy and well fed. You purchase food for your dinos to chow down on whenever they are hungry, and play with them whenever they are bored. Some players might enjoy this level of interaction with the game, but to me it just felt like micro-managing, and I was not a fan.

Happy Dinos has one of those free-game tropes that we’ve come to expect from the App Store; its use of an energy bar. Most actions you will take in the game will require at least one point of energy, and when you run out you will just have to patiently wait until it recharges. In the earlier stages of the game this isn’t a problem, as you will typically level up or be rewarded with free energy well before your bar is ever depleted. Later on it becomes noticeable, as you are rewarded with less free energy and are left unable to play for periods of time. 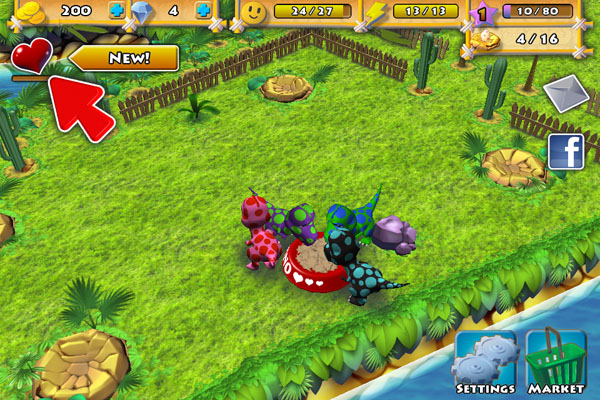 The game offers Facebook integration for players who choose to use it. By connecting your game to your Facebook account you are given access to two distinct features. Firstly, the ability to check out other parks and see how other players have them set up. The other feature allows you to trade your dinosaurs with friends and family, helping each other to complete collections in the process.

Lastly the game menus are typically well done. Instead of chunks of texts, they use pictures to signify what’s going on. It can take some time to learn what the pictures mean, but for the most part they are straight forward and easy to navigate. There is a downside however, and that comes in the form of the game’s discounts. Items that are discounted are emblazoned with a big gold emblem that shows how much the item is discounted by. These emblems quickly clutter up the page and make it less than appealing to look at. 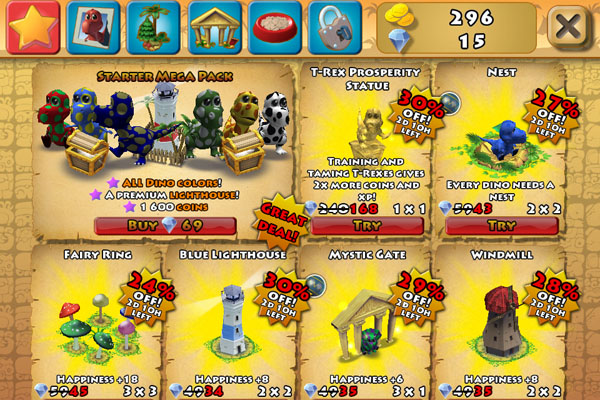 Happy Dinos visuals are not going to win them any awards, but that isn’t to say that they aren’t nice. The island itself and the water surrounding it are bright and clear no matter how much you zoom in. Although the textures are not top-of-the-line, they maintain a cartoonish charm that really shines through.

The cartoonish charm isn’t only shared by the backdrops, as the dinosaurs themselves have it in spades. They are brightly coloured, detailed with a tonne of different patterns, and as full-3d character models, they really stand out and look great. The colour and variety of these dinosaurs really makes you want to keep breeding and collecting them, just to see what they all look like.

You see other human characters through 2d artwork in some of the game’s menus. The two primary characters you will encounter look like they belong in an episode of  Dora the Explora, or Go Diego, Go! They are well drawn, and have a life and charm of their own. The game wouldn’t be at a loss for not having them, but their inclusion is nice regardless.

The audio in Happy Dinos practically oozes “joy.” It is upbeat, has a nice tempo and you just can’t help but feel happy while listening to it… Well for a while at least. After playing for a few minutes the music becomes incredibly repetitive and you will find yourself wanting to switch off the sound just to keep playing. 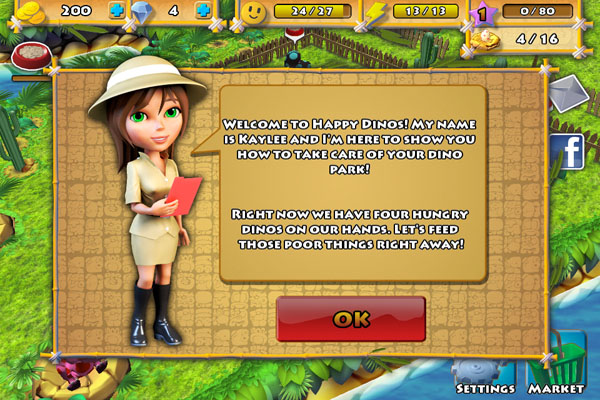 Happy Dinos is an interesting game. Its cute, colourful visuals and simplistic gameplay features almost distract you from its core gameplay; a mixture between town-building and collecting. It is a fun enough experience for what it is, but it doesn’t offer anything that will make gamers go “wow! That is awesome!” Still, if you like town-building sims, and are a fan of brightly coloured dinosaurs, then give Happy Dinos a try… If you aren’t interested in both those things, then this game might not be fore you.