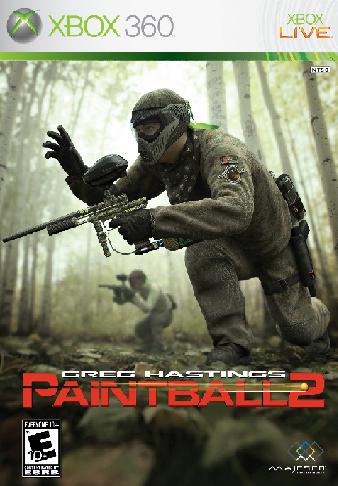 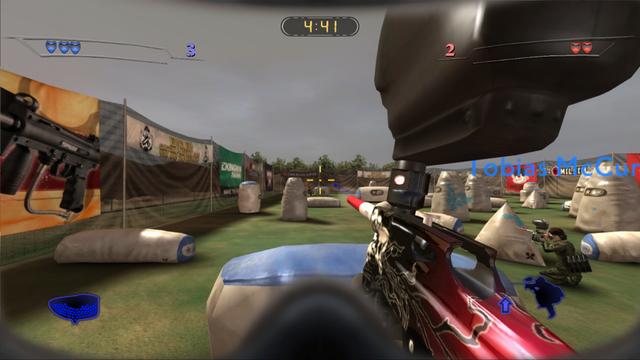 Story
In Career Mode, you start out as a rookie paintball player. There are three different paths to choose from, Tournament Speedball, Recball, and Tournament Woodsball. Greg is the guide from the start and will be heard throughout the career mode explaining tips and a bit of information about each game type you will be facing. This was a huge plus for me as I am not too familiar with paintball and the tips and tutorials unlike some titles out there actually were very helpful and taught me a lot about the differences between various guns field types.

The further you progress through your career, the more you can unlock through the games in game currency system allowing for upgrades to your guns and gear. Career Mode is rather simple for the most part, beat a team in the set number of rounds given and move on to the next. While it was a bit simple though, I found the overall experience to be rewarding and the game kept it fresh by mixing up the match types and different fields.

Gameplay
GHP2 offers many different things in the gameplay department. From Capture The Flag to Assault and many other game types, the content is surely enough to keep you busy, but my biggest worry was how the game would control. I was happy to find out that nearly every function can be customized to the player’s liking making the ability to control your character a comfortable and easy experience by simply changing the settings. As far as the default controls go, I really found nothing wrong with those at all but as fast paced as this title is, it is nice to be able to adjust small areas such as turn speed for more precise movement and shooting. Movements work well and there are three positions you can adjust to, standing, crouching, or prone. It is also very easy to pull off a quick dive to duck behind cover when being shot at. 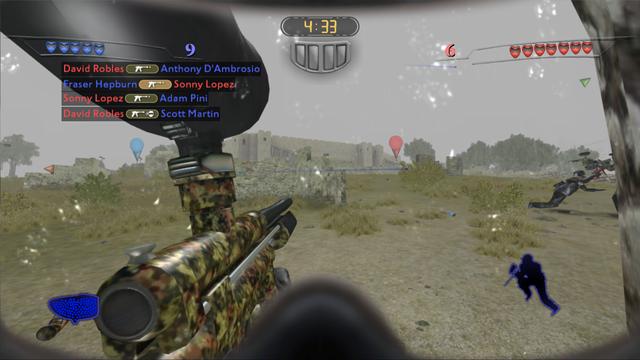 Speaking of shooting, the guns to their job well and with practice, it is relatively easy to get down the methods of how to hit your targets as sometimes you may find the wind speeds to play into how accurate your shot is. You can also change the hand you carry the gun at anytime during a match which is very useful for what section of the field you are on. Focusing on a target will improve accuracy, but will play into speed and sight range. The guns all feel and react very realistically so skill is something the game does make you earn over time and the learning curve might be a bit much for some players out there but if you stick with it, the fun of that you can get out of the title will start to shine through and the game becomes very enjoyable.

One part of the game that was a mixed bag was the AI. At times my team members would stand on the wrong side of the cover and get eliminated quickly by the opposing team. I also was literally pushed out of my cover a few times which was comedic but did hurt the outcome of a match more than once and made me feel that a lot of AI was preset and a bit robotic. The AI players seem to always want to run down the middle of the field for CTF matches after they grab the flag making them easy targets for the opponents so in many cases it may feel like you need to be a one man team to win a match.

You can however control your team with certain actions such as sending them to various points in the field or to defend an area which doesn’t really fix the problems with your team, but it does help to get them in the areas you feel they need to be. The opponents AI is usually smart for the most part though and can create quite a challenge with some unpredictable strategies that add a lot of fun to a match. There is also a “Cheat Meter” which lets you have a cheating by hitting the correct spot on the meter to wipe the paint off. Most of the time this won’t be helpful as I seemed to get pelted right after pulling this off (which was difficult to start with).

My best advice is to go into Greg Hastings Paintball 2 without the readiness to play your typical FPS. I learned quickly that the game’s engine is purely focuses on the sport of paintball. Learning and listening to the tutorials and minor tips really do sort out any confusion of how to play. 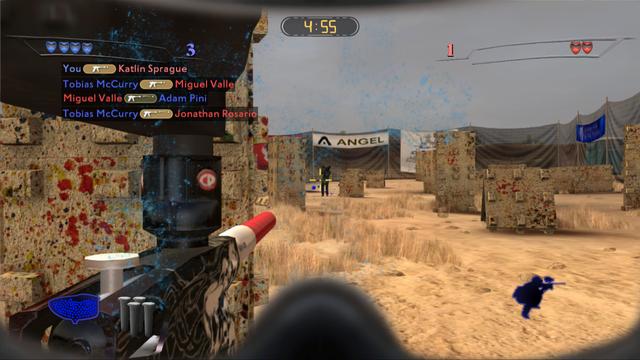 Graphics/Audio
In the graphics department, it seems like more was focused on the little things than the overall experience. The fields and even the players themselves are rather generic. Yes, the fields do FEEL different, but the bland textures do not make them LOOK different aside from colors and terrain. Each player in the game also looks dated and it can be hard to distinguish one from the next. With that said, I was surprised to see how well little details were handled. Your goggles can fog up from a dive with heavy breath and you can have soaked eyesight from the paint, rain, or mud which helped me get past the other graphical problems.

The music in the game is mainly upbeat rock tracks which fit well. Each character is given a voice which they use during the matches from the AI competitors and were actually kind of smart. I could hear a team member shout that they were going to get the flag and I would instantly see their model make their way to that point which was rather cool and I was happy to see how well the voice commands matched up with the somewhat flawed AI. There is also a virtual crowd that burst out during exciting moments of each match but they can drown out crucial things such as the sound of footsteps approaching, which while realistic can be a bit frustrating due to how many times the crowd yells throughout a match. 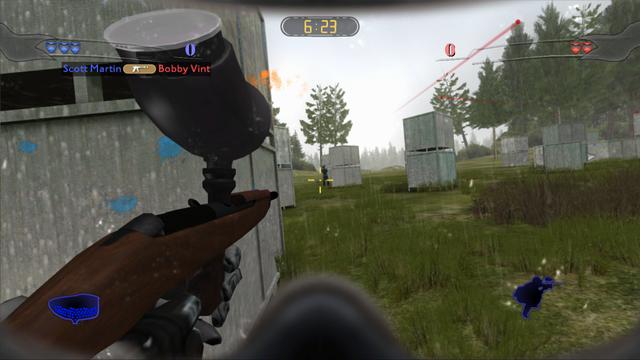 Overall
Greg Hastings Paintball 2 was a rather pleasant surprise. There are quite a few flaws within the game without a doubt but I feel like if you are a paintball fan, you really won’t mind these as this title pays so much attention to detail when it comes to the guns and real-life field recreations it can outweigh the negative aspects of the game very easily.

Even if you are not a paintball fan, I would say give this title at least a try before you put it off for it’s lacking presentation. I found myself having a lot of fun in the online and offline modes and the engine used is quite addictive and is truly unique. The minor details in the game were pleasant to see and the career mode was challenging and enjoyable and kept the whole process of moving through from being too monotonous. With a ton of content,a field editor,online & local multi-player and even a single player exhibition, Greg Hastings Paintball 2 is a solid title that overcomes its flaws by being full of content and fan service.

I Give Greg Hastings Paintball 2