Overview
The platforming genre has really taken off on the mobile platform, there has been countless titles that have set the market on fire such as Temple Run and Jetpack Joyride. The formula for those types of games is really relatively simple and for many has already grown thin, so how do you build upon the working formula and make it something new? That is were Greedy Dwarf comes in, a game that literally turns the genre on it’s head! Could this be the next big mobile gaming sensation? Read on the find out. 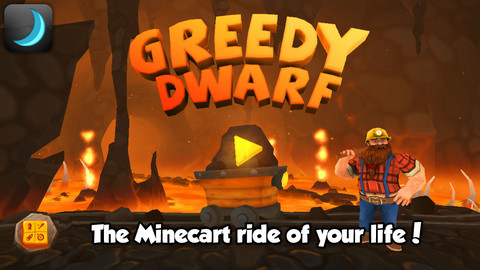 Gameplay
Greedy Dwarf is nothing if not innovative, it takes the platforming genre and twists and turns it into something new and fresh. Placing players in control of the titular Dwarf with a greed for gold, you must traverse the caves in your mine cart in order to reach the goal of gold. It is a simple premise but the execution is what is most intriguing.

Instead of the simple gameplay of moving left or right, Greedy Dwarf allows you full 360 degrees rotation of the caves, having you driving upside down or sideways to avoid obstacles. There are also portions in which the game switches camera and becomes a two dimensional side-scrolling platformer providing a fresh little change between the three dimensional sections. This all makes for some very challenging gameplay and is served well be the excellent level design that never seems to grow stale. 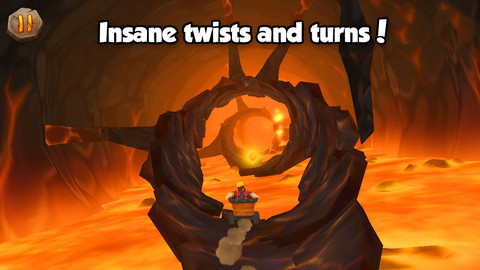 The control scheme is quite well conceived simply requiring a swipe to move the Dwarf to the desired location and a two finger tap for jump. It works quite well despite being a little slippery at times.

What makes Greedy Dwarf so good however is the way it looks at gaming in a different light, this isn’t your run of the mill mobile game, there is so much creativity in this incredibly well-conceived game. It is definitely a must play game for mobile devices and at it’s price point you really can’t go wrong here. 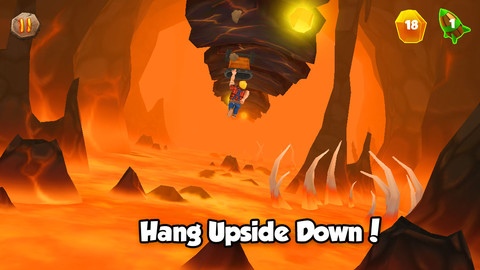 Visuals and Audio
Aesthetically Greedy Dwarf is quite colourful and definitely visually appealing. The graphics are quite nice and do a good job at representing the intriguing lava-soaked caverns that our Dwarven hero dares to venture. It doesn’t push too many boundaries visually but given the great level of innovation in the gameplay it is perfectly acceptable.

The soundtrack for Greedy Dwarf gets the job done, but it is far from anything special. It is the weakest portion of this overall great mobile game and does feel somewhat like an afterthought, but it is good enough to get a passing grade, it just doesn’t do anything remarkable instead opting for the simple and straightforward. 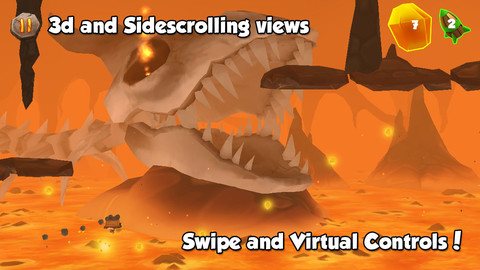 Overall
If you are looking for the next great mobile game, Greedy Dwarf is definitely it. By taking a new perspective on the norm, Greedy Dwarf becomes something truly special in a market filled with copycats. This is something new and fresh that deserves your time and attention.

Greedy Dwarf is pure fun with a side dish of challenge to boot. Crescent Moon Games without a doubt have another hit on their hands with this one. Greedy Dwarf breaks new ground by turning the genre upside down and finding magic in a new perspective. A different perspective on the old and faithful proves to make Greedy Dwarf one of most impressive mobile games in recent memory. What are waiting for? Get in the mine cart and get ready for fun.