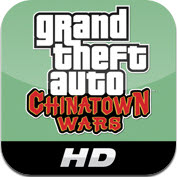 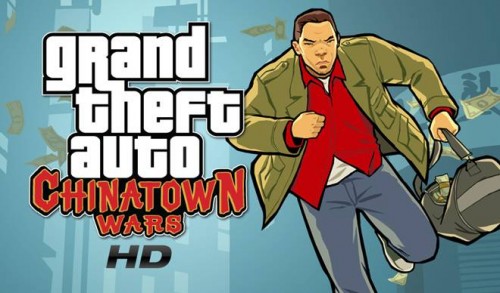 Grand Theft Auto Chinatown Wars is back once again !! This time Rockstar games have released a HD version of the game for Apple’s iPAD, and let me tell you, if you haven’t already got a copy of this game.  Click on the link just about that says BUY NOW.  Let the 700mb download start and while you’re waiting for it to finish and install on your iPAD, keep reading this review anxiously waiting to get stuck into possibly one of the best games ever to hit any mobile portable device and certainly the iPAD so far this year.

Grand Theft Auto : Chinatown Wars is currently on the Nintendo DS, the Sony PSP and just recently the Apple iPhone.  The iPhone version of Chinatown wars at the time was labelled the little brother of both the Nintendo DS / PSP versions.  As people thought that the iPhone wasn’t capable of handling games of such depth, size and magnitude.  This perception was pretty much shot down very quickly when Apple iPhone version made its way onto the App store.  The iPhone version held its own and proved that it can hang with its bigger brothers on the NDS and PSP. 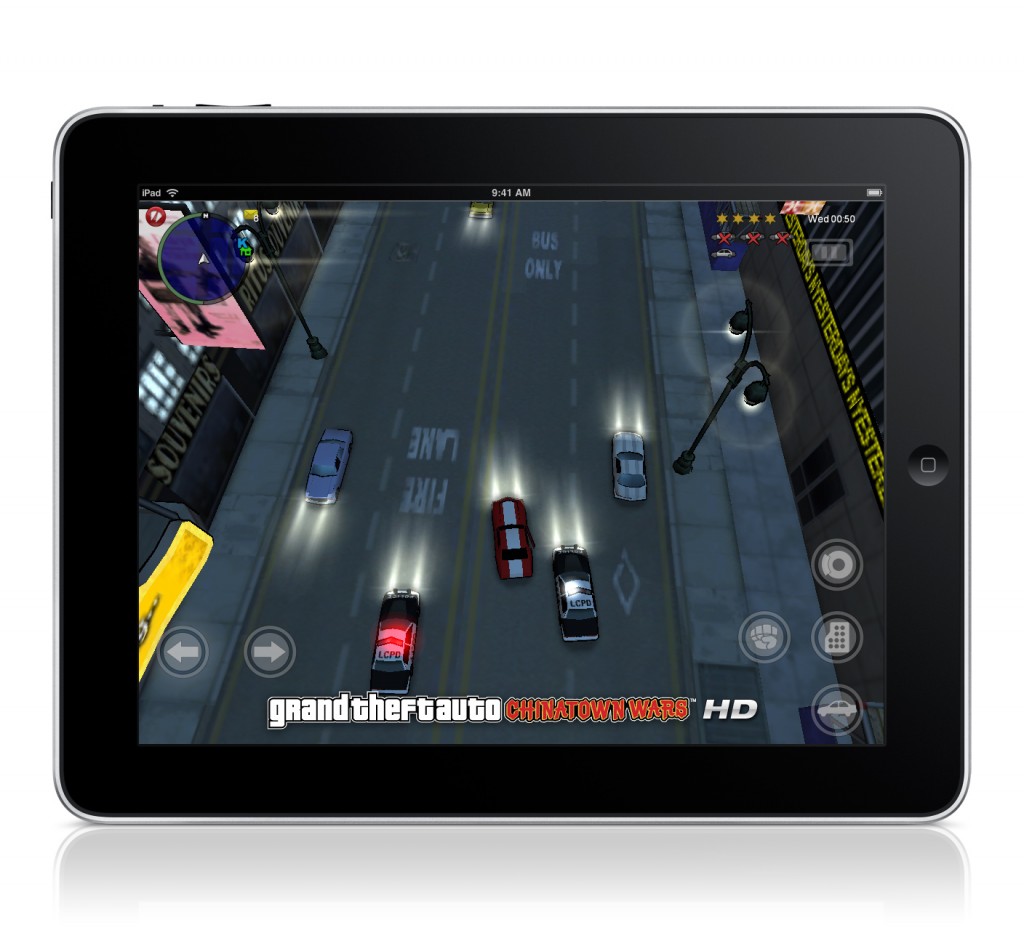 Just recently there’s a new big brother on the block, he’s bigger, wider, clearer, and in HD !! Enter Grand Theft Auto Chinatown Wars HD on the Apple iPAD.  This is Rockstar Games’ improvement on what is already a fantastic title.  With better visuals, clearer and smooth animation, explosions, improved controls, and playing it on a 1024×768 size screen makes the experience  even more enjoyable.

If you’ve played the iPhone version you’d know that the controls were not perfect especially when driving and getting away from the police. The iPAD controls are much more accurate and precise and feel easier to use and less cluttered than on the iPhone version.  As always the iPAD version has the best of both worlds.  It contains tutorial elements that reference the PSP buttons and also cell shaded graphics then on the flipside the touch / stylus mini games from the DS, taking full advantage and pushing the iPAD to its limits.

As we all know there are no physical buttons or controls on the iPad, they are replaced by an onscreen virtual joystick.  For newcomers, this will take time getting used to.  The best thing about this iPad version of Chinatown wars is that with the larger screen the virtual controls feel easier to use and are much more responsive allowing you to run around, drive like a MAD MAN, shoot, punch, and performing those cool car-jacking mini games like a pro. 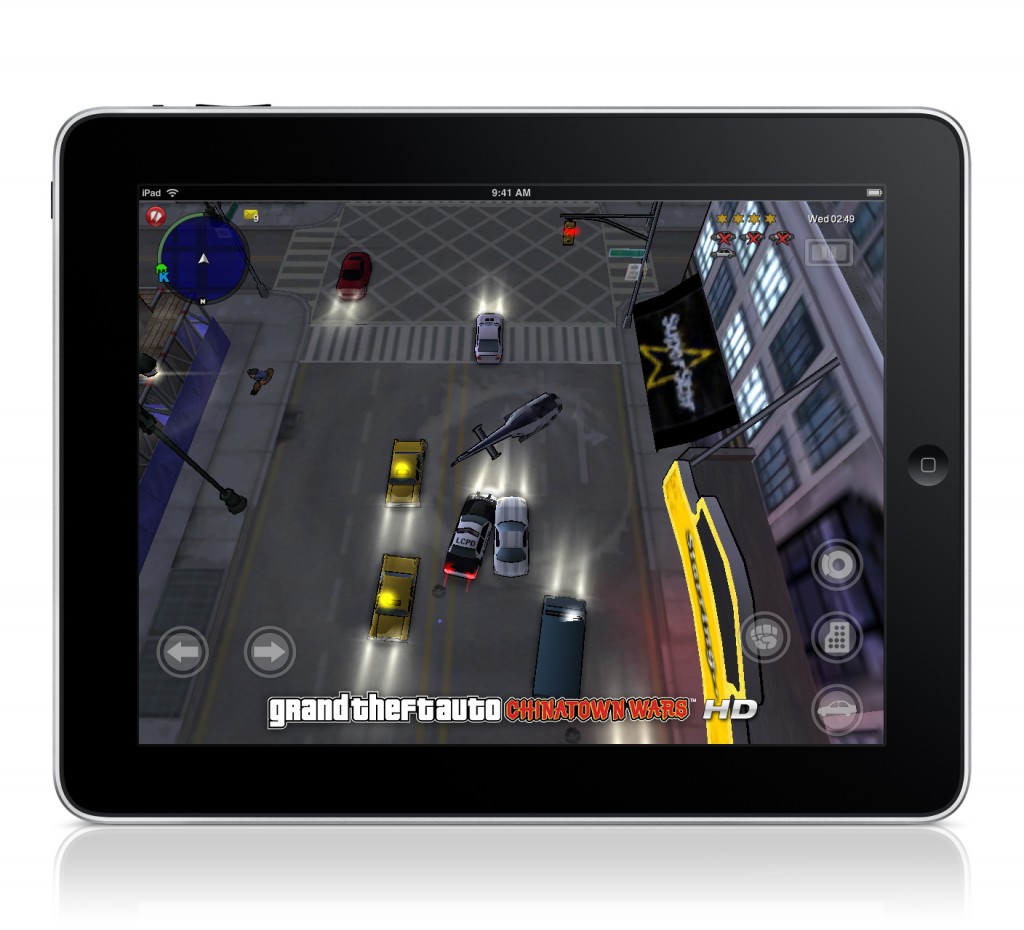 While travelling on foot, the control system is responsive and not at all sluggish.  You have three types of actions you can perform:  Punching, Fly Kick attack, and jumping and leaping over short fences.  Pressing the top right button if you have collected a weapon will allow you to auto target on an enemy and with the same button you use to punch, you can shoot instead.  The auto-aim works fairly well, if you want to switch between targets you will have to move and face that particular enemy.  If you are familiar with the DS / PSP you can lock on to targets with the extra buttons but this is not an option on the iPad.  But this is not a problem as the targeting system works quite well and enemies are not very strong and can be dispersed with a few bullets.

Jacking cars is also very simple when your close to a parked car or stopped car a car jack button appears in the middle of the screen down the bottom, pressing this will initiate the car-jacking where you will either throw the driver out of the car and enter it yourself or begin a randomly generated timed mini game that will get you to hotwire it by pressing specific actions/movements/gestures on the screen before the timer runs out and alarm goes off.

Once in car you have a choice of five radio stations, there are three buttons on the right that will allow you to accelerate, break/reverse and shoot out the window.  There are two available steering styles.  Analog : which is how you control Huang when you’re on foot, or a left/right two button control.  Both are up to personal preference by default the left/right two button setup is available.  If you don’t like it, jump into the system settings and change it to analog.  I would recommend trying both and see which one best suite your gameplay style. 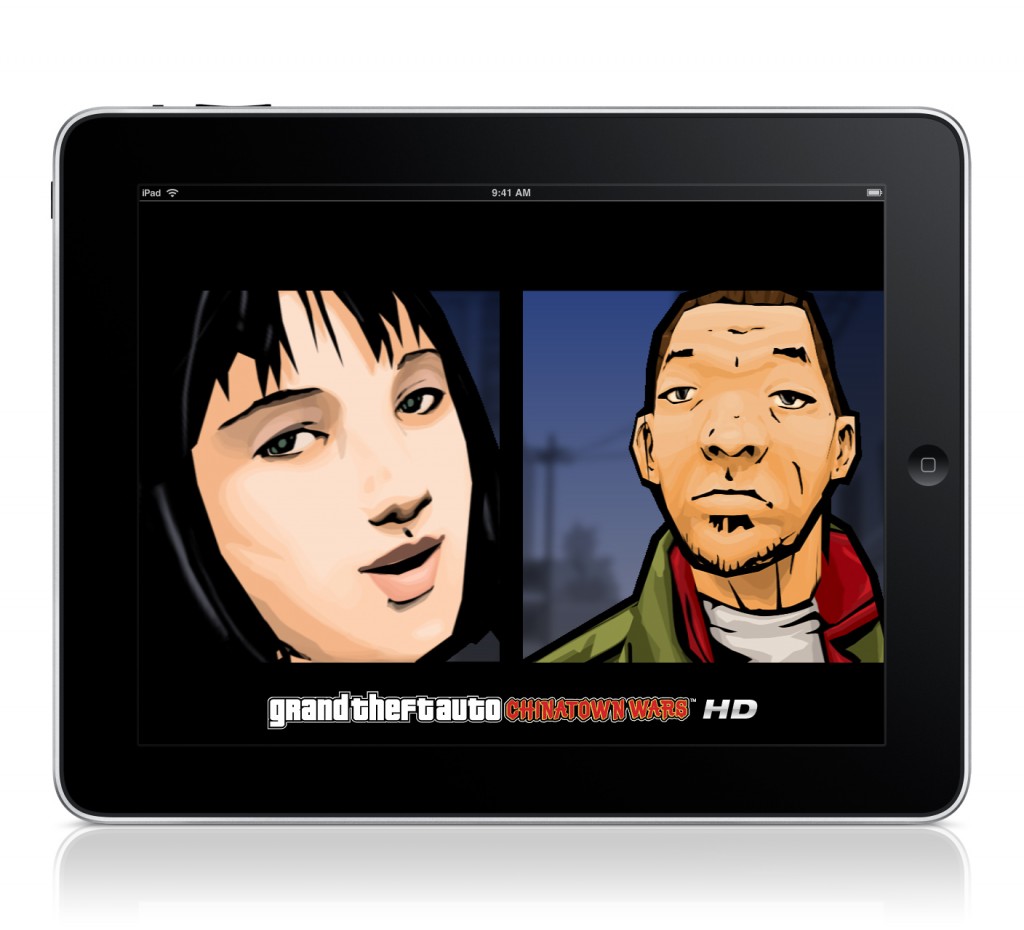 One thing I must commend is the excellent assistance in getting players new to the genre up and running with a fantastic and very detailed tutorial missions that explain everything about how GTA : Chinatown Wars works and plays.  From walking, to punching, to car-jacking to using the your emails and GPS.  It’s perfect and I think more games should be taking notes on how Rockstar has done this.

Once the tutorial missions are out of the way then that’s when the fun really begins.  As you all know in GTA you can do whatever you want.  If you feel like driving around, killing innocent civilians, you can, you can meet up and do a bit of drug dealing with the local drug dealers, similar to the old classic dope wars game we all used to play when we were young, get tip offs from drugs dealers about whats going cheap buy all of the stash and then rush over to the other side of town and sell it at a high price !! make super big profits and be awarded for it. Just be careful to not get caught by the cops with the stash, if you do.  BAM !! you lose it all. 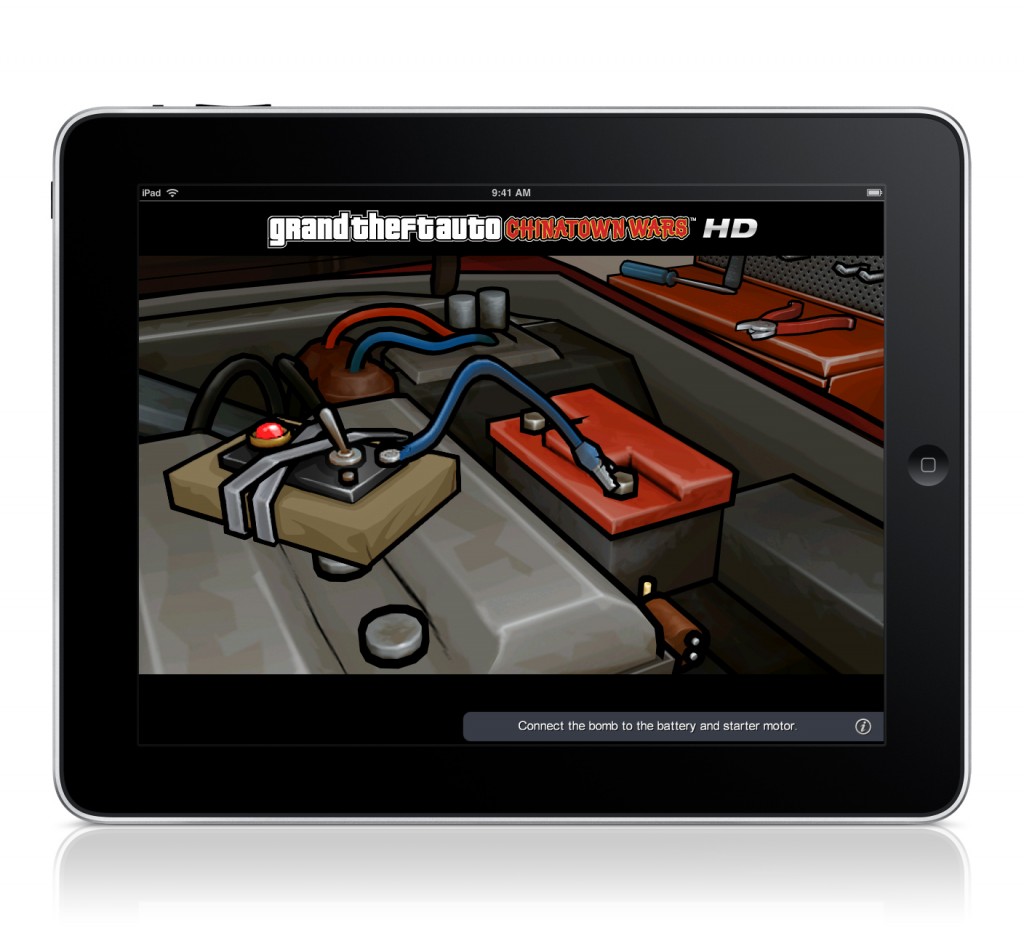 Along with selling drugs, you can also try out some side missions as well such as the classic taxi, ambulance and also firefighter driving missions.  There’s a truck load of other secret things to find.  There are also lottery shops where you can try your luck with scratchie tickets, scratch and match to win big money.  As in GTA IV you also meet random encounters on the streets who will ask you to do something for them.  The amount of cool stuff in Chinatown Wars is EPIC and the best thing is it’s all available in the palm of your hand. You have all the freedom in the world to do whatever your heart desires.   This is a living and breathing Liberty City the likes you have come to know and love.

Grand Theft Auto Chinatown Wars HD is by far the biggest game available on the Apple iPad,  to sum it up in one word it’s MASSIVE !! The features available are well polished; take for example the GPS system when driving works absolutely flawlessly as it guides you around the city to your next destination.  Also the in-game email system and mobile phone messages are great.  Missions get sent directly to your phone, characters notify you on what missions to take next and where the next major drug deal is happening so you can sell that cocain for top dollar 😉 Rockstar have done a fantastic job with re-creating this title for the iPad. 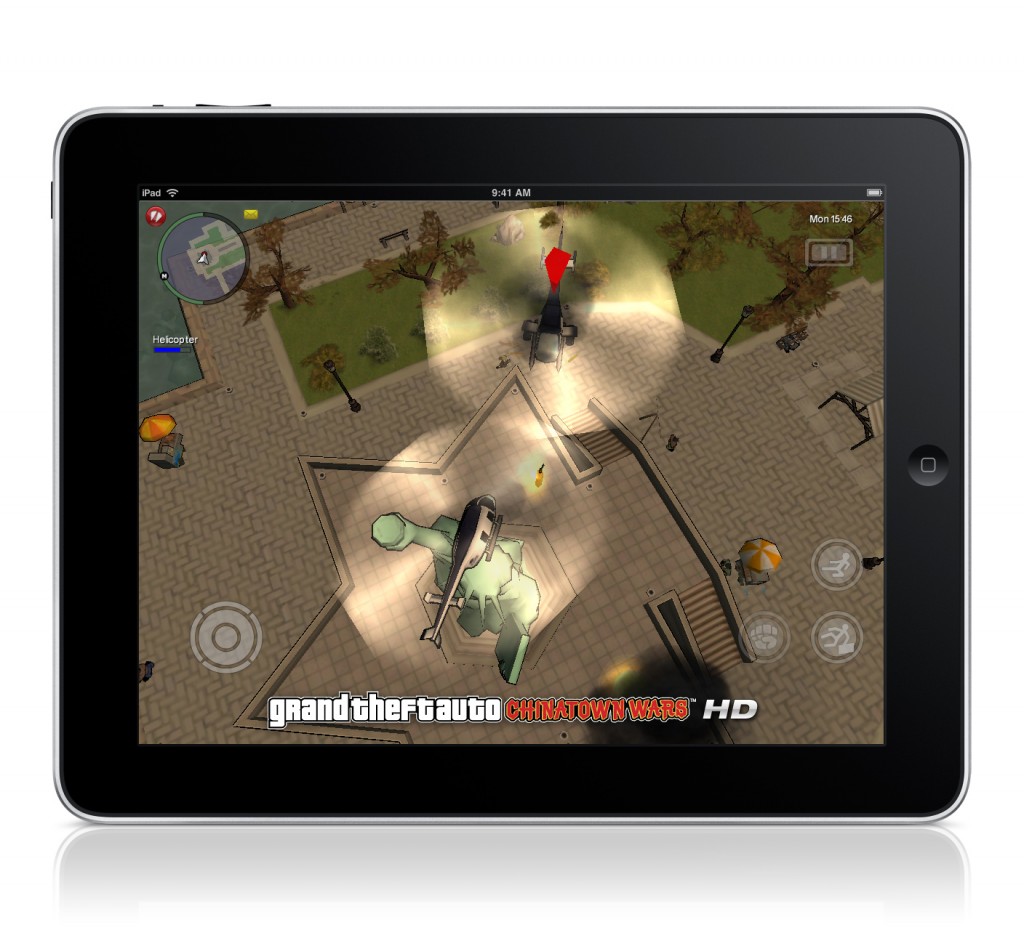 In closing Grand Theft Auto Chinatown Wars HD on the Apple iPad ran perfectly.  There was no slowdown, no loss of framerate, for a game that is over 700mb uncompressed in size, everything loads up quickly, gameplay is smooth and crisp and very responsive.  With hours of playtime expect to have your USB charger handy on numerous occasions whilst attempting to finish this game.  Grand Theft Auto: Chinatown Wars HD is priced at $9.99 US which is a 1/3 of the price it sells for on both the Nintendo DS and PSP.  It’s price for an Apple iTunes store application is a little higher than other apps, but look at the big picture, and what you’re paying for. Grand Theft Auto: Chinatown Wars HD has quality, fantastic gameplay, massive amount of game time. So I think the $9.99 price tag is nothing but well spent!!

Capsule Computers would like to give Grand Theft Auto : Chinatown Wars HD on iPad – 10 Capsules out of 10

If you’re a fan of the sandbox style open world crime games, Grand Theft Auto: Chinatown Wars HD is by far the best and only title available on the iPad at this time. The massive amount of missions, content, graphics, and gameplay will keep you busy for hours and hours.

Click on the BUY NOW at the top of this review.  You will not be disappointed!!