Overview:
Over the course of smart phone gaming’s small history, several game formulas have come and gone. However there are those that strike gold and are regurgitated several times over to success. Gold Jumper is one of the latter. It is a platforming jumper game, which have seemingly taken over the app store, with titles such as Doodle Jump, Little Dreamer and many more. Gold Jumper follows the trend of the working jump formula whilst polishing it up. But does it polish into gold or is it just a lump of coal?

Gameplay:
Gold Jumper like the plethora of other jumping platformer titles on the iOS features a simple one touch control system. Like many of the other games of the same genre, it works well enough and can provide some fleeting enjoyment here and there. However it also carries the same downfall as the others – it is repetitive and only truly works in short bursts. 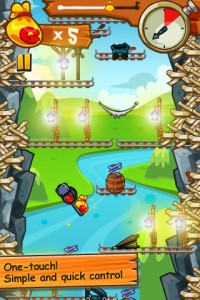 Now this isn’t a bad thing necessarily, these games aren’t designed to have the player sitting for hours straight playing through. However if you were that way inclined, Gold Jumper will leave you bored quickly. It is certainly short burst gameplay.

The game tasks you with guiding a burlap sack of gold upwards through a mine shaft by making it jump between mine carts and other types of platforms and obstacles. There are several ways to play this. You can play through a story mode (which technically has no story) with each world featuring 4 mine shaft levels followed by an end level racing mini game, which is a pleasant change from mine shaft scaling. You also are given the option to play endless versions of the mine shaft jump or the cowboy canyon race. Both of which can get tiresome very quickly and have no difficulty control, often leaving you traversing an extremely difficult platform early on in the endless playthrough.

The gameplay in general is enjoyable and overall is a much more polished version of the tried and true platform jumper formula.

Visuals:
The game features appropriate visuals, which ooze western grit. The sack of gold is a memorable character, mainly due to it’s character design and being an odd choice for a main character of a video game. Other than the sack of gold, there isn’t much else too memorable about the games visuals. Besides the dirty grit of the mine-shaft which captures the western theme superbly.

The graphics are well presented through and through and don’t strive for anything too spectacular or innovative. This works only in it’s favour. The game itself is far from innovative and the visuals match that. 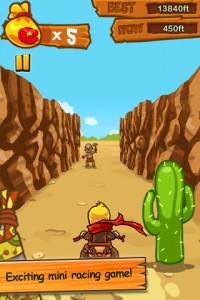 Perhaps the games biggest black-spot is in it’s soundtrack, which is simultaneously grating and uninspired. The audio comes across as very rushed and being of extremely cheap quality. Featuring the same few tracks repeated over and over, almost beckoning you to either mute the game or stop playing altogether.

The audio needed much more work. Everything about it from the cheesy western tunes to the repetitive sound effects that get on your nerves quicker than a 90’s Batman movie’s dialogue. It is very irritating and sadly fails in all regards at being a cohesive soundtrack to a overall good game.

Conclusion:
In closing, Gold Jumper is a fun take on the platform jumper genre that has taken the iOS by storm. It doesn’t do much in the way of innovation, nor did it need to. It polishes the already winning formula to gold and proves once more that the iOS suits titles such as this more than any other – simple, fun, short burst gameplay.

I give Gold Jumper