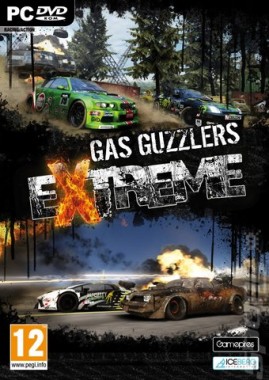 Overview
Avoiding anything too revealing such as the words death or race, this title seeks to emanate the meaning of both. Having played a few aggressive racing titles like Mario Kart Racing, Crash Team Racing, Gran Turismo, and Death Rally – I believe I had a good basis for Gas Guzzlers Extreme to test against (not to mention watching the iconic movie). What kinds of weapons can you equip? What kinds of vehicles can you drive? Is there enough death for all of us? I’m glad you asked…

Story
Gas Guzzlers Extreme sheds off the storyline coating and prepares a metallic blood bath for you to sink head deep into. Of course a cinematic trailer was induced to provide a dramatic lead into the title, but for those that read text well we know that the previous driver did not come down with chicken pox. 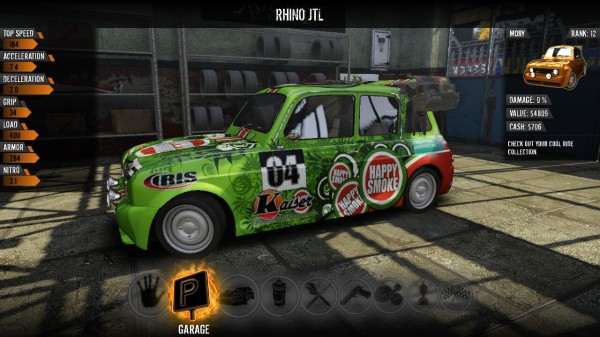 While not incorporating a story, the game maintains itself well enough to provide exciting events as well as ‘interesting’ sponsors. Dare I say “Happy Smoke” anyone? And yes, your car will be painted with several lovely green plants if you so choose.

Gameplay
Keyboard playing style suited my needs for Gas Guzzlers Extreme since I did the same with the top down racing shooter “Death Rally”. At first I thought the control schematic to be bit funky, but I adapted quickly and saw the functional advantages of the layout. Utilizing the arrow keys for directional movement was a given, however I noticed that the A, S, D, X, and spacebar were the remaining controls. In order to use your weapon in a race, you user the ‘S’ key. If the weapon has the functionality, ‘X’ can be used to shoot the projectile behind you. ‘A’ is the special items drop for smoke screens or even mines, and ‘D’ is your nitro boost when available. Lastly is the spacebar which controls the vehicles’ handbrake. This button can be extremely useful for those that do not use the railings as bumper boards.

Another healthy tidbit to note is the available pick-ups that you may come to encounter. Along your journeys you may come across items such as wrenches, money stacks, oil barrels, mines, and nitro boosts. Wrenches will provide a much needed health boost to help protect you from being eliminated/destroyed during a race. Going out of your way to protect yourself means a lot in this title. Money stacks give a small amount of cash just in case you become poor or money hungry. Oil barrels provide a slick surface for those that drive into it. These are typically used on turns to cause tailgaters to crash sidelong into rails. Mines are also a great tool to deal minor damage to opponents – too bad they aren’t more lethal. And last but not least are the nitro boosts. These handy dandy doo-dads give you that extra boost when you need it the most. Interesting fact… running into objects during races generates a little bit of nitro in your tanks. 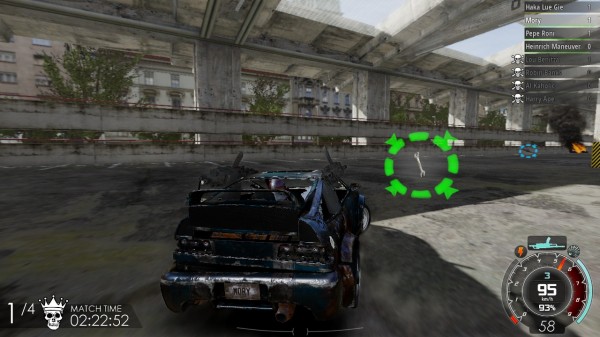 In the campaign mode the objective is to work your way up the ranking list in order to qualify for a tournament. Initially, you are able to choose from three variations of races: power race, battle race, and knockout. The power race consists of players racing to the finish without using weapons with the exception of using power-ups and slamming against other cars. Mines are completely legit as well as oil barrels.

Next up is the battle race which is perhaps one of the most deadliest races to partake in. In this race opponents are geared up with weaponry to take each other out. The objective in this match is two-fold. You can either take your opponents out of the race, and/or try to finish first. The bonuses in this race are larger considering the potential repairs that one must undergo.

Knockout matches may be one of the hardest races to complete because you must finish first in order to attain a prize. Each car has a detonation device implanted in their vehicle, and there are seven laps to the race. Every lap the last of the eight participants is eliminated from the race by detonation. Therefore, you need to decide if its worth taking out the person ahead of you or passing them to stay in the game.

Eventually, a sponsor may rise to offer you extra money in races in turn for you to wear their logo. Not only is this a great way to add some extra cash to the garage, but you will in turn be invited to sponsor events if you continue to win. These events typically break down racers into two teams with objectives like: capture the flag, team deathmatch, and team race. Now you are not only tasked with how well you are doing, but how your team is doing. If you are able to come out one top in one of these matches, your reward will be substantial. 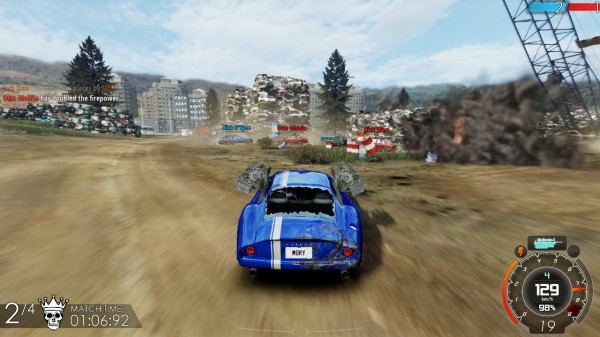 Multiplayer is disconnected with campaign, thus any improvements that you made within your garage will not be reflected online. For the online multiplayer, you are able to join rooms with or without people and begin a series of events against people, AI, or a mixture of both. You are able to start off with any vehicle along with any weapon to customize your own ‘preset’ options. This promotes a fair competition among players as you decide the type of vehicle as well as the artillery you want to use in the fight/race. During my time playing multiplayer, I experienced a small handful of players on Gas Guzzlers Extreme’s dedicated servers. Though playing deathmatch with other online players was fun, the purpose to play online is purely to attain a higher rank/leaderboard status. This could be considered fun to some death race junkies, but I prefer my cup of tea with something a bit sweeter – unlockables.

Audio
When creating your first profile, you will recognize the easily discernible voice overs available for your choosing. Clearly this is meant to be a guy’s guy title with Duke (Nukem), William (Wallace), and Arnold (Schwarzenegger). Whether you feel like unleashing your meaning of “freedom” or showing off your “balls of fury”, you’ll have enough time to test each voice over out thoroughly.

Sound effects were believable through special effects and impact moments. The combination of animations and sound especially worked for weaponry such as the M-143A “The Spindoc” because the item requires a build-up prior to firing the ammunition. For those that prefer immediate devastation, rocket launchers can be made at your disposal.

Visual
While I enjoyed the setup for detailing and optimizing individual vehicles (18 total in game), I felt Gamepires could have taken customization a bit further with implementing multiple decals/colors. When I build a car, I want to have the access to freely design the vehicle no matter how god awful my taste is. This includes being able to have an expansive list of decals that I can freely manipulate by growing or shrinking the graphic. Sponsors may give that extra flavor, but having a bit more freedom in design would increase replayability. 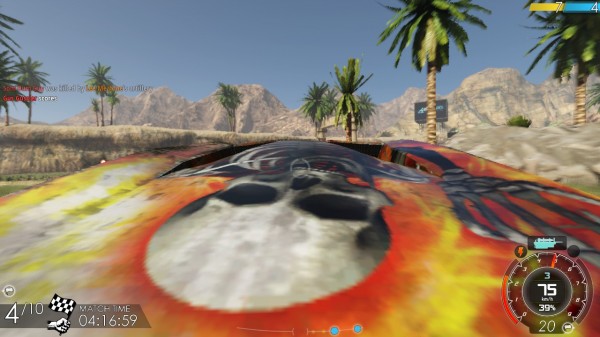 What you can expect from this title is plenty of visual candy elsewhere. This stems from an array of environments to the damage to your vehicle. For example, the front cover on your car is becoming unattached due to incoming damage. Closer inspection by entering a close up view (C – changes view) shows us that your visibility has reduced because of the flapping cover. Furthermore, damage to the vehicle can be noticed by zooming out (also C) removing the obstructed view.

Overall
Gas Guzzlers Extreme has some fantastic qualities that should be experienced over and over again. First, the campaign has a sound foundation that entails blowing up any/all competition. Second, the title is visual eye candy considering both special effects and detailed environments. Lastly, you get to blow vehicles up! (Wait, I think I said that one before…) 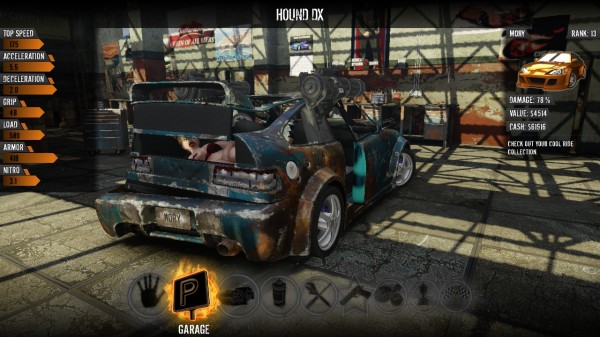 Areas that the game lacks could be helped further ultimately by involving more customization. While there are 18 different vehicles with their own decals, I felt that more freedom in this environment could allow players to truly manifest their own creations. And to add further effect of the multiplayer, Gamepires could have involved a tiered unlocking system for garage themes or unique decals available once certain online achievements have been accomplished.

In conclusion, Gas Guzzlers Extreme did well to drown me in a metallic blood bath. I’ll admit the price might be a tad high, but delivering a rocket to the face is probably worth it.