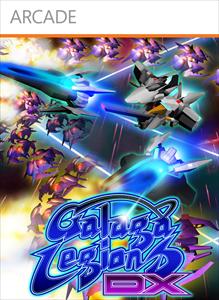 Galaga Legions DX is the Namco Generations reboot of the Galaga arcade game. In Galaga Legions DX, players take the role of a Space Craft armed with two satellites and must take down swarms of Galaga, an insect like race of aliens, in order to score points and survive. Galaga Legions DX differs from the original Galaga in that players are able to move about the playfield freely, and by utlising the satellites, fire in any direction around the player.

During my entire playthrough of the game, I had no idea what the actual story of the game was. I mean, I got that you were someone in a spaceship who had to rip through wave after wave of Galaga in order to do something, but I’m not entirely sure what that thing was. Protection of my planet? Maybe, though I never see it. Destruction of the Galaga, making me the bad guy? Possibly. Though, I’d say that Galaga isn’t a game that needs a story, it’s a game that allows players to make up a story as they go. 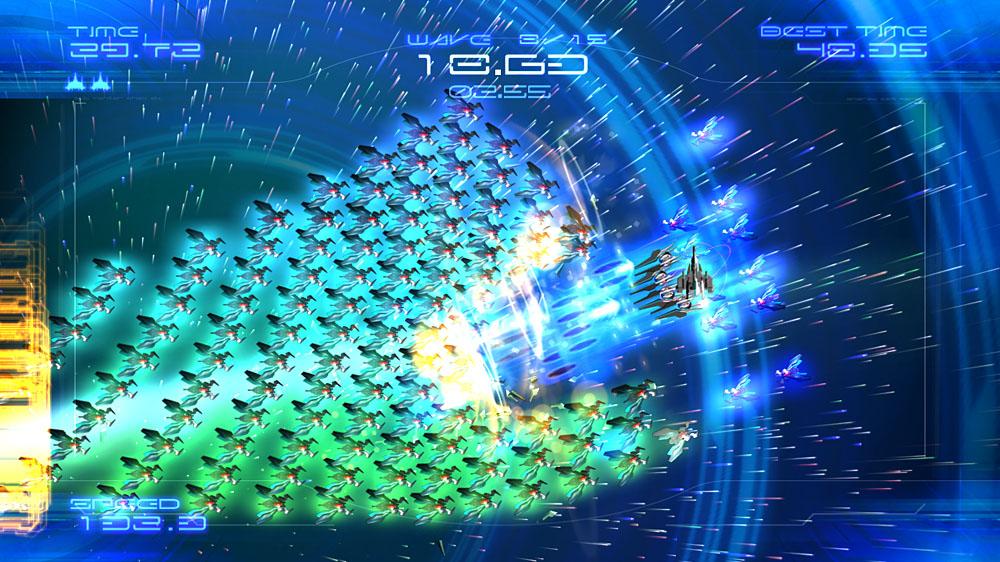 In Galaga Legions DX, players take the role of a spaceship designed to take on wave after wave of Galaga. At your disposal you have two different mechanisms of attack, a formation of satellites that shoot forwards, and a formation of satellites that shoot in a spread-like fashion. By using the right type of weapon during the right wave, you can maximise your killing efficiency and maximise your score. As you progress through a level, you will be able to capture an enemy swarm of Galaga, which act as an extension to yuor satellites and enable you to fire even more shots towards an enemy, as well as doubling your own satellites on your ship. 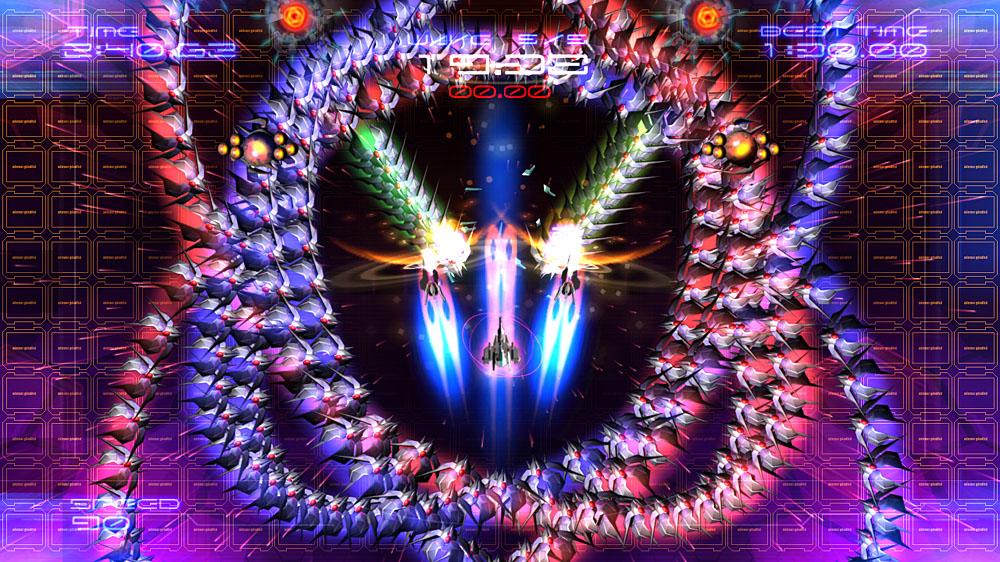 Galaga Legion DX has 9 areas for players to battle through, with each one having 5 levels within it. Each subsequent level and area present an even greater challenge to a player. The last level in each area will present players with a great challenge, which is something that I love, and that challenge is that players can battle through 99 waves of enemies in whatever time they have left. Of course, not completing all the waves in any level of any area before the timer runs out will not cause you to lose the game (that’s reserved for being killed), it just cuts your chances of achieving the highest possible score that you can. I quite liked this aspect as it stopped you from being stuck on a particularly difficult wave for too long and kept the highly frenetic flow of the game. Of course, only the most hardcore and dedicated player will be able to reach the 99th wave in the last level of an area.

As you go through a level, enemies will spawn in different locations across the screen (as opposed to the original Galaga where it was always top down), which can create some pretty chaotic action if you’re unprepared for it. Though, if you master these spawn locations, you will be ripping through the game with the fastest speed and highest scores!

And speaking of highest scores, Galaga Legions DX allows you to save your rank for each area on the online leaderboards. If you should choose, you can also upload your replay data for other players to enjoy. I found that watching the replays of the highest ranking players to be essential in learning the game in order to maximise your score and hope to overthrow them. This is esepcially true for the Championship area, which is, not only the most fun area, but also the most competitive. At the time of writing the number one ranked player is UnspokenSix8, with a highscore of 11,726,300. Just completing an area will only yield 20% of that at best, so be sure to learn the levels. 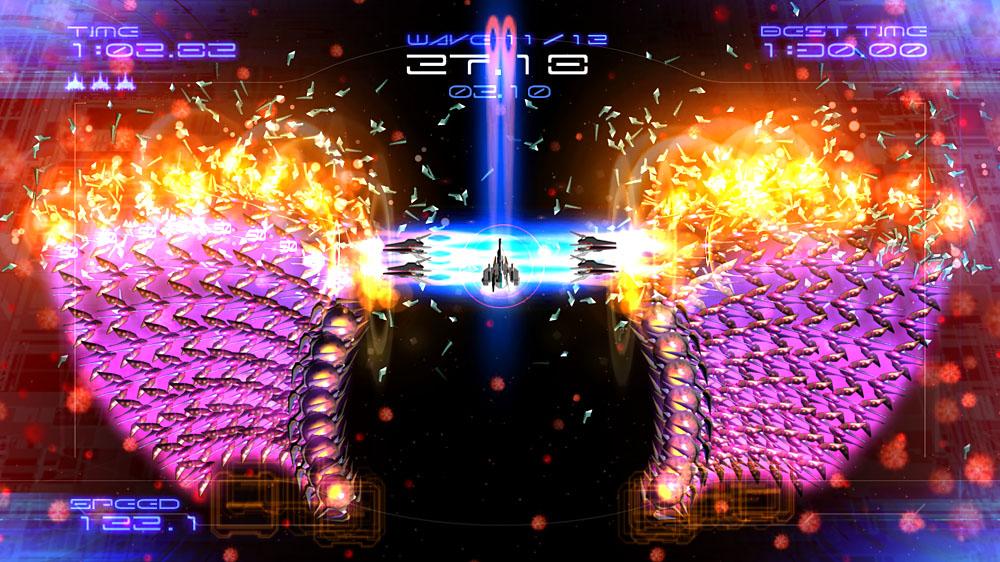 Included in the gameplay in addition to each area is a Time Attack mode. In Time Attack mode, players can take on any level in any each area in an effort to down each wave against a clock counting downwards. Get the highest score and the best time to win. This adds an amazing replayability to the game, and along with the leaderboards and personal statistics, this game will have you returing for more.

As a gamer, I absolutely love arcade style games (which you would think is strange given my love of PC gaming over all else) and Galaga Legions DX gameplay takes me back to the arcade, even if I wasn’t actually around early enough to experience the almighty retro game arcade cabinets of old, and it’s through the gameplay that it does this. This is definitely a game I’m revisiting, I only wish it were ported to the PC.

Galaga Legions DX features an amazing techno/electronic soundtrack that compliments the games visuals nicely. There isn’t too much to say with the audio here, the soundbytes that play at the beginning and end of the areas are indicative of what you’re supposed to be doing and what has happened. 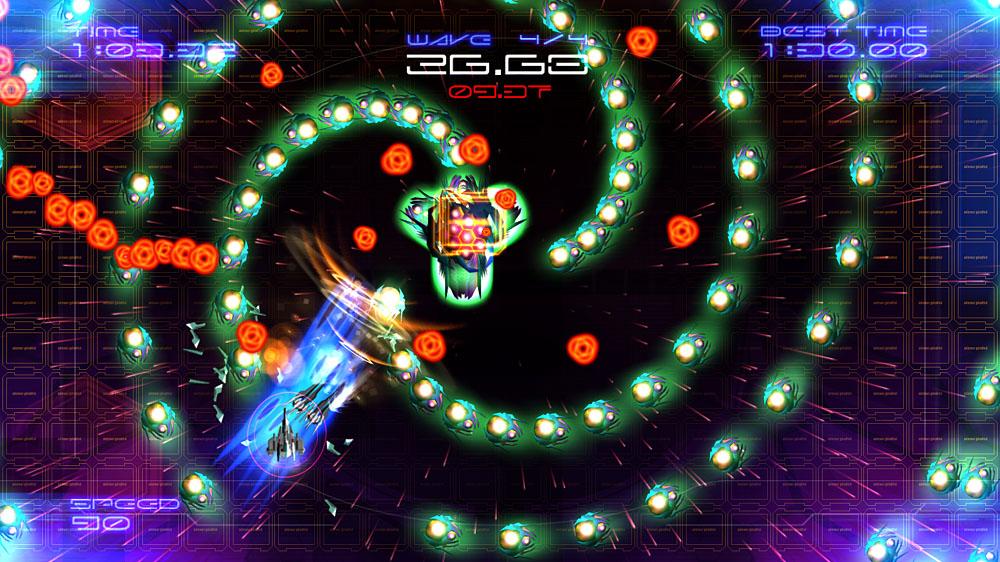 All the weapon blasts, explosions and the like all sound quite believable, as well as extraordinary and great. No complaints from me, the sound team did a great job and should be commended for their efforts!

Galaga Legions DX has amazing visuals, even if looking at a still image of the game might not convey that. As a still image, everything looks like it doesn’t belong on the playfield at all, or at least that’s the impression that I got anyway (for this section, I refer to the default skinset). But, once you start playing, it all comes together nicely and it fits perfectly. I am absolutely in love with the games models while they’re in motion and think that the team did a good job with them.

While the games default skins are modern adaptations of classic Galaga enemies, the game features different types of skins for the models within the game. All of these are more retro looking, in that they are pixel based and are often reminiscent of classic top-down shooters of old. It’s interesting going back back and watching the top players play through the game and noticing that each player has their own preference of skins within the game. I use the type-1 skins myself (the default new updated ones), but a lot of people like to use the classic Galaga skinset. 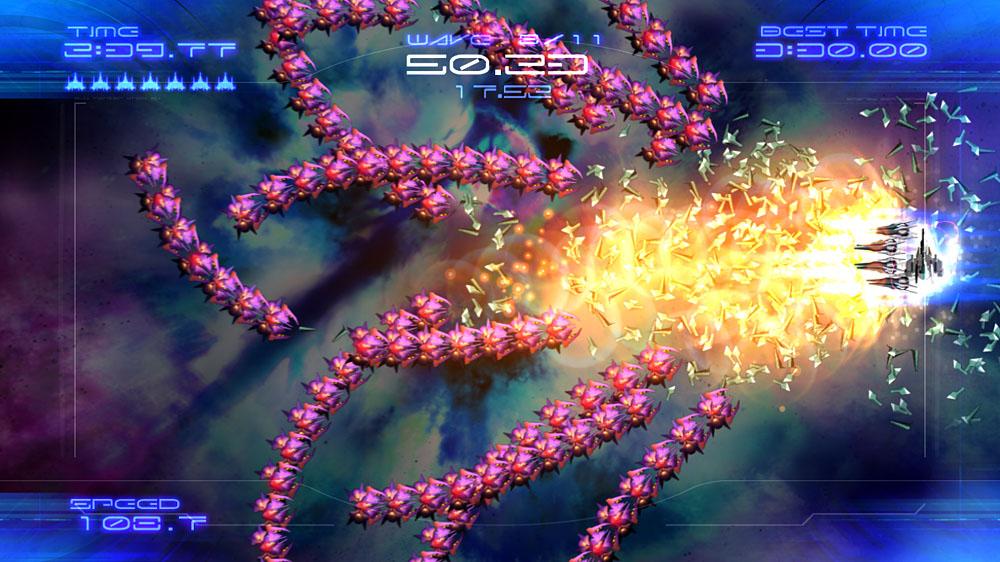 Not only are the skins for the game amazing and plentiful, but the (what was a dense-black background in the original arcade) backgrounds within the game are amazing to watch. They shift from a starting area, to a very bright, beautiful and evolving backdrop. The colourscheme seems to reflect what’s going on in reference to the level that you’re on in an area. While it’s never explicity stated what happens between level 1 and level 5 of each area, the background helps to establish what could be happening. In my interpretation, your spaceship is increasing in speed and sitorting the space around them until they reach the final level which is Galaga controlled terriitory. I know it’s not officially stated, but it makes sense to me.

Galaga Legions DX is an excellent arcade shooter from Namco-Bandai, as well as an excellent follow-up to a timeless classic. I would maybe even go so far as to even say that it might be even better than the classic, if only for being not as locked down as the classic was. The game is an amazing package, the visuals, gameplay and audio all compliment each other very nicely and is definitely worth the price and the download. I hope that everyone has as much fun with this as I did!