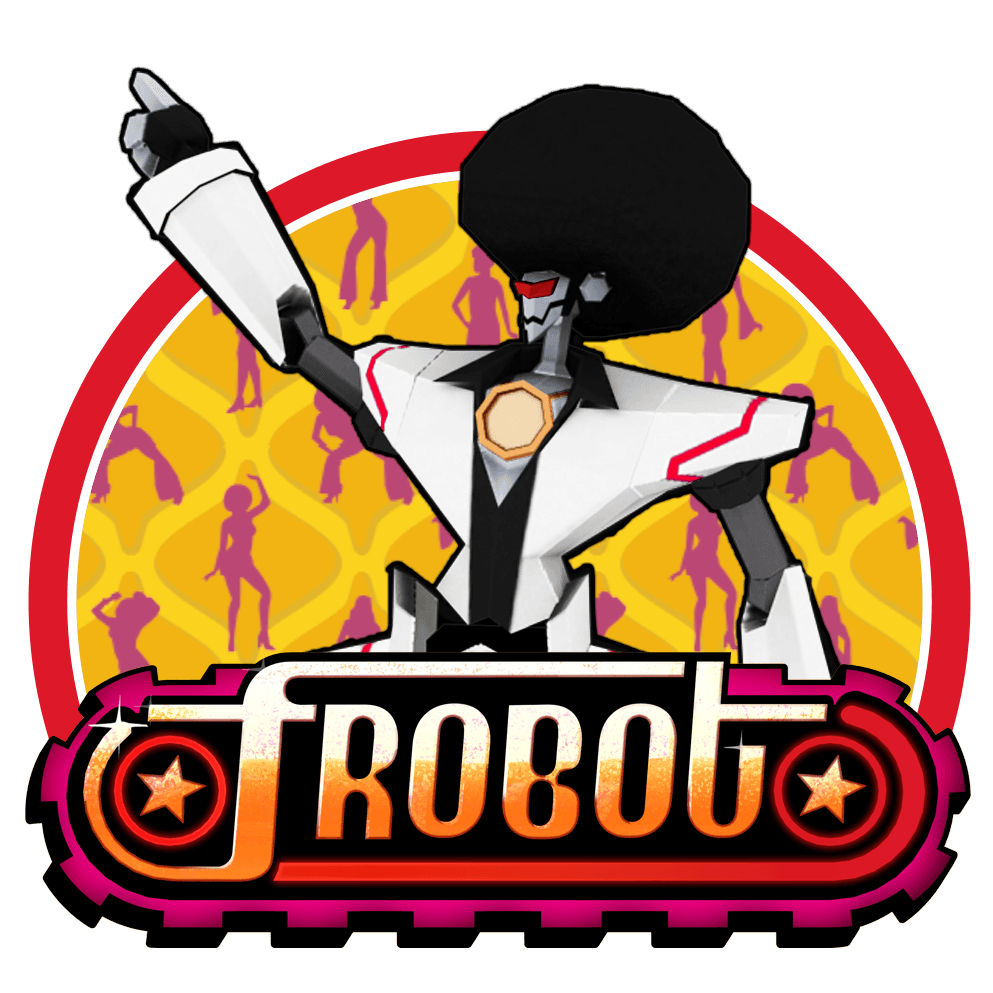 Frobot is the product of developer Fugazo and an interesting title without a doubt. You play as a stereo-typical robot with an afro, some kickin’ treads and five “foxy girlfriends” who you must rescue by solving puzzles to open each level’s warp pad. As I learned with Frobot, this title has much more that meets the eye and can be quite a mind-bending puzzle experience with a pinch of shooting added to the formula. How does all of this work? Here is my review for Frobot for the WiiWare.

Story
The story starts off by giving a brief history of how Frobot came to be and shortly after a small tutorial your off on your journey as you learn your five girlfriends have been bot-napped and you must make your way to the BotBlocker Headquarters to get back your lovely ladies once and for all. 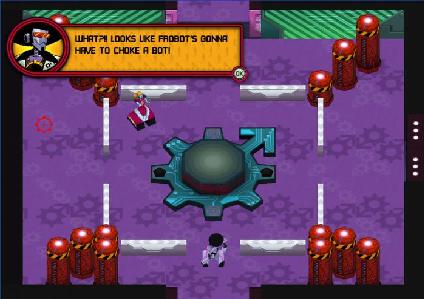 If you think the story sounds a bit over the top, you would be right. That is what makes the game stand out though is the over the top storyline and the setting that will make you feel like your in a time warp between the 70’s and the future. Frobot himself is full of some brilliant one liners that bring some humor to the game and all of the characters interact in this funky style and dialogue that set the whole mood for the entire experience.

Gameplay
The story and setting pack quite a punch for creating such a visual and original world, but the gameplay is by far what makes Frobot so addicting. The game plays with a top-down view the entire time and you control Frobot with the WiiMote & Nunchuck. Each level begins by starting you off right in front of a warp pad, but it isn’t that easy. You must go from room to room of each level and perform various tasks with your weapons to unlock the next room, then continue this pattern until you finally power up the warp pad and go to the next level.

Weapons in Frobot vary quite a bit and like the characters of the title, they all possess that funky charm and fit well with the theme of the game. Your basic weapons include your cannon which can easily be fired anytime and your “Dynomine” which is a remote mine for blowing up enemies or obstacles on your way through the game. As you go further into the game, more weapons and power-ups become unlocked which make harder puzzles easier to deal with such as the “Robo Hustle”, a boost technique that let’s you briefly speed up, the “Stud Missile” which can be used to take out tougher enemies from afar, and the “Jive Stalker” which is a disco-ball that you control with the WiiMote pointer.

Control is certainly something to pay attention to as proper pointing is a must if you don’t want your funky hero to meet his demise quickly. You can easily control Frobot with the Nunchuck, but you also must properly point in the direction you want to fire with the WiiMote and accuracy is one thing that puzzles beg for as I discovered during my play-through of the game. Each room’s puzzle is different from the next, whether it be simply shooting a specific target to open the door, picking up blocks to move to specific platforms, or just taking on enemies, there is plenty of variation from level to level which is actually well thought out and can be stumping at times to properly pull off each room’s puzzle. 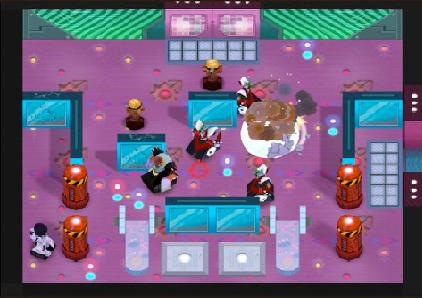 All of these can bend the brain a bit when it comes to solving specific tasks as some puzzles later on mix in all elements for a much harder difficulty, but luckily even novice jive turkeys can set the difficulty level to best fit their play style. The one type of puzzle I didn’t care for all too much was where you needed to drop blocks on to a catapult and fire them to a platform across the stage. It wasn’t that the task was too much, it was that I kept having my cube miss it’s mark and on areas that are blocked left me to restart the level altogether. This thankfully isn’t as frustrating as it may sound though as each level isn’t too long to start with. Bosses also enter the mix later on and add a nice change of pace into levels, which after defeating you rescue one of your five ladies.

After you complete the main game, Frobot offers quite a bit of re-playability, which is a rare thing to see in a WiiWare release anymore. In the standard “Single Playa” mode, you have hidden “Power Picks” that can be obtained to unlock “multi-playa” stages and power ups as well as a timed goal that will keep speed runners on their toes to finish each level as quickly as possible. Multi-Playa is a bit different from the main game as you actually utilize all of your arsenal to take down other bots in a battle to the death. This mode is actually quite fast paced and involves a good deal of strategy, so if you get bored of the single player game, inviting some friends over can squeeze even more life out of the experience. 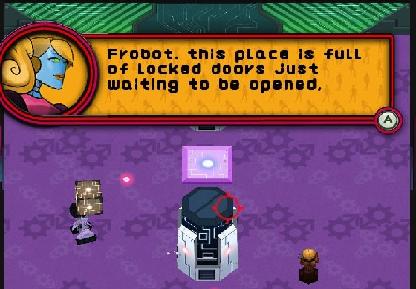 Graphics/Audio
I really could compare the visuals to something from a PSone title or at least near it, as the models are a bit blocky, but the game utilizes so many colors and charm to each level as well as clever character design, the not so great graphics are not a problem after you really get going into the game. Enemies, bosses, and Frobot himself each have a unique art style that fit perfectly into the disco-themed world and the level design gave the game more of a retro title flare.

The music is upbeat the whole way through and of course the soundtrack is made up of disco tunes up until the final level which makes the setting truly come alive. Characters talk in text bubbles, so there really is no voice work to be found but dialogue still remained funny and relevant even without sounds from the speech as everything is well written.

Overall
Frobot is quite a unique title and it took a bit of getting used to for me to really take off into the game, but once you get the feel for the controls and puzzles, it can be easy to lose a lot of time in this disco-filled blast fest. Not only are the puzzles challenging, each are well made and are actually fun to execute the solution due to some innovative design. Robot blasting is also a great addition which bends the genre card for this title a bit and kept the gameplay from getting stale the whole way through. Add in the intense multi-player, and Frobot is easily worth the 1000 points ticket price. If you are a fan of any sort of retro style shooter or puzzler and love crazy themes mixed in your gameplay, this title is for you. Even if you are not any of those, Frobot is a title that demands attention and with the demo now available, you should now run to your Wiis and give this Funky bot a try.