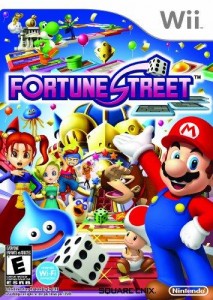 Fortune Street/Boom Street
Publisher: Nintendo
Developer: Square Enix
Platform: Nintendo Wii
Release Date: December 5, 2011
Price: $49.99 – Available Here
Overview
Last year at E3, it was definitely surprising to hear that Fortune Street would be coming to the Nintendo Wii. This series was born in Japan in 1991 as Itadaki Street and created by none other than Yuji Horii, who also spawned the mammoth RPG franchise, Dragon Quest. Think Monopoly, add in some new rules along with popular faces from both the Mario and DQ titles, and you pretty much have the recipe for this turn based party game. In a way, Fortune Street is a rather risky release for Nintendo to put out, due to the fact that the western audience is completely unfamiliar with such an odd concept. Does this dice-rolling eastern phenomenon cross seas to make a mark, or does it simply blend into the vast amount of oddball party titles already on the platform? Here is my review for Fortune Street. 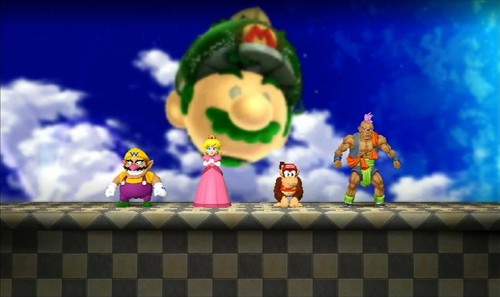 Gameplay
It only takes one trek through Fortune Street’s tutorial to realize that this title is not like any other party romp on the platform. Set up like a standard board game, the main objective of the game is to buy up as many properties as possible and use currency as a weapon against foes. Players take turns rolling a dice, and then watch their cheerful character waddle to that space, where they will either have the choice to buy the lot, or to participate in a special activity. Yes, as I mentioned, there is a lot of ties that this Street shares with Monopoly, and anyone going in with that mindset will appreciate all of the rather detailed offerings found inside.

Before we get to that though, let’s take a moment to speak about what most would be exited to see, and that is all the Mario and Dragon Quest themes within. As the boxart so prominently displays, the true “it” factor of Fortune Street is the many colorful locales and characters packed inside. As far as the Mario fare goes, the usual cast of contenders can all be found here, with the likes of Mario, Luigi, Peach, Yoshi, and several other inhabitants of the Mushroom Kingdom stepping up to prove their worth. On the Dragon Quest side, several monsters and humans alike are playable, such as a Slime, Platypunk, Stella (from DQIX fame), and Carver (DQVI), just to name a few. Many of the boards also have themes based upon many locations from all of the games as well, which brings a nice level of nostalgia and lore to the otherwise dry rule set required to actually play the game itself. A Mii is also available to be chosen, but using the Mii as a playable character in any video game on the Wii is mainly a thing of preference, and I chose to select actual famous faces for nearly all of the playthroughs I participated in. In my opinion, the sheer thought using a Mii when there is half a cast of characters that rarely see any tributes outside of their own franchises (Dragon Quest) defeats a lot of the purpose for this collaboration as a whole. 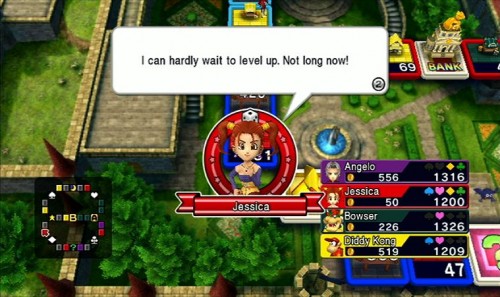 At the start of a game, players will begin right alongside their opponents on the bank square. After a quick selection to see who rolls first, everything takes off and all participants are allotted a small sum of cash to make their starting purchases. Each board has a different shape, but most of the squares consist of “Shops” that can be bought and invested in by anybody with the right amount of dough. Once you have ownership, anyone that lands on that space moving forward will have to pay a specific fee that is based on your net value. As players buy up properties in the same area, district, these values will rise, meaning that more “rent” money will go to whoever has ownership of the space. It may sound complicated, but if you have played any type of financial board game based on land domination in the past, it doesn’t take much to quickly catch on as that is really what the main concept of Fortune Street presents itself as. 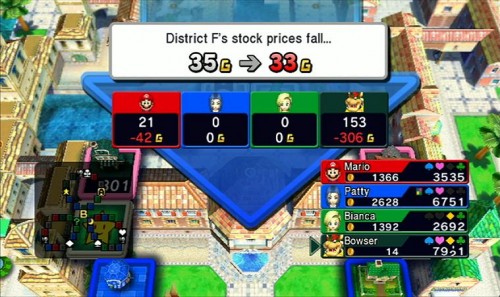 While the basics are easy enough to learn, stocks can be a whole different story. The board itself can be traversed through in a short amount of turns for the most part, even if you chose to take a forked path or go the long way around. Once the player returns to the bank square, they can choose to buy stock to increase their overall property value or sell off any lots to fatten up their wallets a bit. Stocks can be purchased for any shop on the map that is currently owned (by any player), and allow the investor to receive any extra profits that is made from landing fees. In all honestly, this is the way that you can get rich in Fortune Street, but if used incorrectly, buying inappropriate stocks can be the downfall of an empire. I could best explain this by asking you to think of the impact of houses and hotels on Monopoly, as those are the stakes players are putting on the table. You do have the ability to sell off stocks as well, but that can lead to a decrease in net worth and send all of your real estate’s values plummeting. It’s a very fine tuned system that works well, but if you have a younger gamer at home that only wants Fortune Street due to Mario, they might want to stick to the easy mode where no stocks are in place. 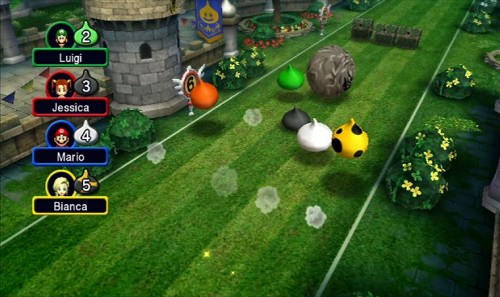 Another important element in  Fortune Street is leveling up. Across the board, there are four special spaces that are based on spades, diamonds, clubs, and hearts. If the player passes by all four before they go back to the bank, they then level up and get a bit of extra cash as well an increase in net worth. While a small addition, this does make going around the board over and over have more of a direction other than the usual property consumption and it definitely pays in the end to get leveled as many times as possible. On rare occasions, one of the scarce party squares can be landed on, which starts a quick mini-game such as slime racing or a card flip activity, where all players can compete for a monetary incentive. These small games don’t really change up the pace from the standard fare, but they do give off a miniscule amount of Mario Party flare that many will be craving due to all of the franchises involved.

Fortune Street is a very detailed road to take, and the usual playtime for one game can take up to four hours as you must wait for an opponent to go completely bankrupt. I wouldn’t say that I was bored during any of my match-ups, but this is a game for the patient, first and foremost. Luckily, there is an online mode that works rather well, and players can duke it online in some rather busy servers at a moments notice. This mode alone adds a ton of re-playability and even though there isn’t any special features or well supported communication schemes with the Wii’s online setup as a whole, I still found the real competitors to be much more of a challenge than the usually dumbfounded A.I. in the main game.

Visuals/Audio
Even by Wii standards, there isn’t a whole lot to see in Fortune Street. There are plenty of familiar characters and backdrops that are sure to set fans of both series into their happy place, but the models themselves appear a bit dated and pixelated on top of the blandly colored board. This normally wouldn’t be a big deal, but considering you have to stare at the same game for hours on end, it definitely can become a bit easy to spot graphical flaws. I know this series has been around in Japan for a long time and has never been too stunning in the visual department, but a little more incorporation of Dragon Quest and Mario into the actual game itself would have made this title much more charming overall. There are some fine backdrops and environments to represent both franchises’ inclusions, but for the most part, everything feels like template swaps and no true detail was put into the well oiled core product that begs for some character. 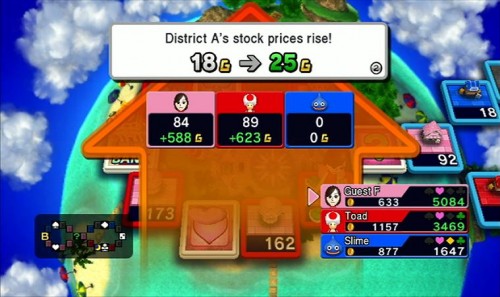 Music on the other hand is a different story. Out of the Mario tunes included, Square seemed to have went with a selection that rarely gets placed in Mario styled-party games. This obscureness works well into Fortune Street’s offbeat nature and brings out a humbleness that a Mario title almost never receives. I am a huge Dragon Quest/Warrior fan, and the first time I was treated to the classic melodies within, I felt urged to blast them over my television and take a break from all the brainwork involved. Sadly, most consumers out there are not going to be overly familiar with the beats from Yuji Horii’s other grand creation, which may make these tracks come off as generic RPG tunes. As far as sound goes, none of these characters have any true voicework. Much like the rather stale graphical design, this robs the entire game of a lot of character and yet again leaves a lot to be desired from such prominent faces.

Overall
At the core of Fortune Street, there is a fantastic board game that is both addictive and fun. It’s honestly quite easy to see why Itadaki Street has grew as a franchise over the years in Japan, as there is a lot of strategy involved that can keep you entertained for a good amount of hours at a time. Sadly, I feel like Fortune Street’s biggest problem is that is involves such heavy hitters, and manages to give a backseat to all the charms that made the cast so relevant to start with. Will the average Wii gamer enjoy Fortune Street just because Mario graces the cover? Very doubtfully. However, this is one series that has potential to grow in the west and as it stands, any fan of Dragon Quest can get a slight fix by seeing their favorite characters finally get some much loved attention in what is at least an enjoyable outing with some fine tunes to match. Love it or hate it, Fortune Street has rolled out of the east is definitely one IP that is worth at least a look by anyone with a love of cold, hard cash.