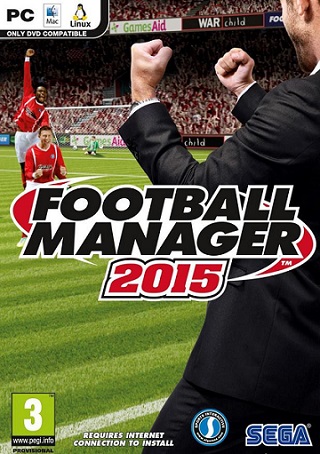 The Football Manager (FM) series has become a staple of the sports simulation genre and has been around for close to a decade. In that time, it has developed a strong and dedicated following whose passion for the game manifested in the extensive guides I had to employ to learn to play this game. This review is not targeted to them, although you can certainly still enjoy it, as I doubt the opinion of this humble writer would be able to sway the opinion of such a dedicated a fanbase. Besides that, I’m not a regular consumer of sports games and this is my first foray into FM so I cannot provide a comparison to previous games in the series. Instead, I will provide analysis and a critique with my outsider observations. So if you’re interested in hearing my thoughts on Football Manager 2015 and maybe getting some tips on how to introduce friends to the series, read on. 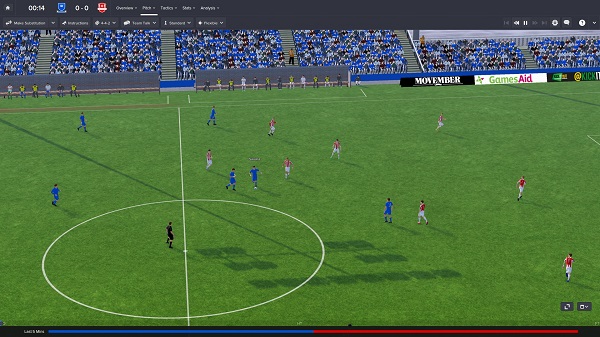 This game is a hardcore simulation of the behind-the-scenes machinations of the cut-throat world behind championship soccer. It’s a game which revels in the cold calculations of number crunching behind the world’s “Beautiful Game”. There are certainly narratives to be explored with you transforming the quintessential underdog team into champions on the world stage or rising up from obscurity to take your rightful place as the world’s top soccer coach. These narratives are created by the player, with game solely providing a canvas upon which the player can connect the various dots. 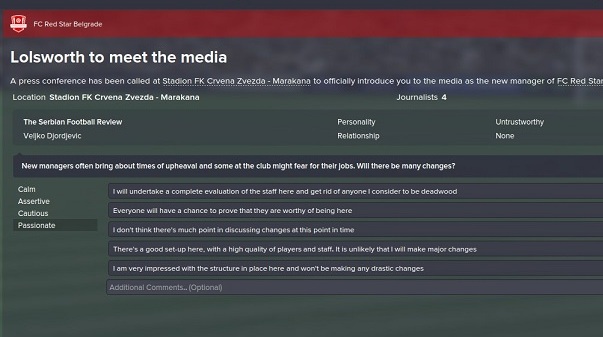 The closest the game comes to providing a narrative to the player is with dialogue trees which the player can use in dealing with players, media, and club officials. The various dialogue options can further be altered by choosing the tone which a player will take such as ‘assertive’ or ‘passionate’. The options are meant to have various effects depending upon the context and disposition of the personas you’re interacting with. Most of the time, I found that I got the best reactions from players and media by simply choosing the positive, passionate responses. There is probably some greater nuance which I’m missing to these interactions, but I ended up playing most of my time in the game as a very happy-go-lucky manager. There were also several instances where I did not appear to have any options and simply left the conversation as soon as it started… 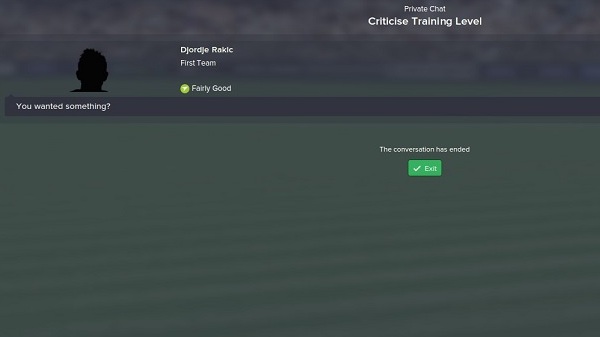 Right off the bat I will say this: Football Manager 2015 is the deepest simulation of anything I have ever encountered. The sheer breadth that this game can cover is amazing and a testament to the engine which runs it. Depending on the power of your hardware, you can have the game simulate a world with tens of THOUSANDS of players, coaches, and support staff with their own individual desires and abilities. This kind of intense number crunching is the very essence which defines computerised strategy/simulation games from their boardgame counters parts. All of these numbers are tied to a real-world analysis of players and staff in the current world of International Football.

Into this mass, you play as a football coach with varying degrees of skill and responsibility. The game gives you your own character to play, with your own sets of skills and stats. It balances a stronger coach with higher expectations from the club board, so it’s still fair to play an international level coach playing with a minor league team. The player is also able to mediate the amount of micro-managing that they deal with by assigning certain tasks to support staff to take care of. 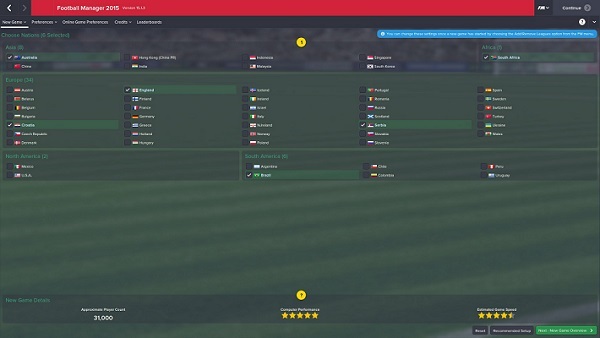 Your efforts culminate with the matches that your team plays, which are played out for you by the computer. There is limited input in these sections, with the player being able to determine tactics and give more specific instructions about how to engage the match, but largely the match is determined by the actions and efforts which came before. This game is reverent of the world of soccer which, when combined with the calculated simulation aspect of the system, allows a soccer fan to take on management of their favourite teams and lead them to glory.

The matches are as fun to watch as any real world soccer game and at several points I did yell abuse and cheer at my screen when my team was appropriately terrible/good. I quite enjoyed these moments but the problem is that they were few and far between. I spent most of time dealing with the fairly clumsy UI as I dealt with various aspects of running the team. For me, I felt overwhelmed by the decisions the game was giving me as I had no frame of reference for what my actions would result in. 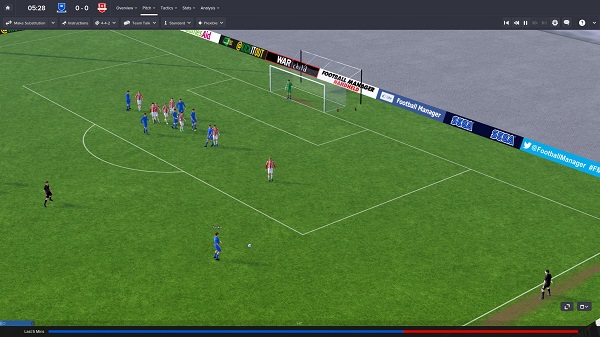 This game lacks a tutorial to help new players gain a basic understanding of the game mechanics and the various decisions they would be making. The game does have tooltips which can be turned on or off to help give some explanation, and alongside this the AI of the support staff will give recommendations on various actions. Even after reading guides and watching playthroughs, I still had to rely heavily upon the advice of the AI as well as delegate most duties to my assistant coaches. The point of this game is intense number-crunching with the player deliberating over various decisions, but it needs to do more to give new players an understanding of the weight and consequence of their options beyond a simple tooltip.

What I’d recommend for new players beyond simply engaging in extended ‘trial-and-error’, is to delegate most activities to your support staff and then learn each aspect of the game one-by-one. This will hopefully take some of the pressure off while you’re learning the ropes and you should eventually end up with a more holistic understanding of the mechanics as you learn. 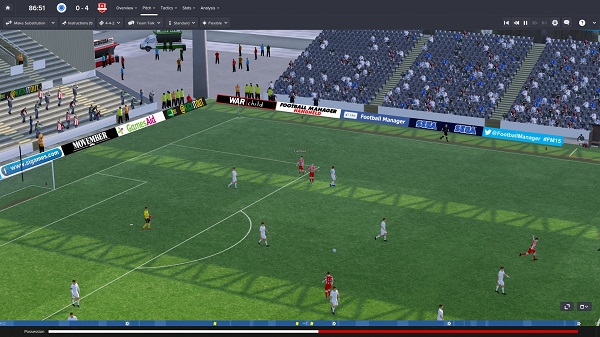 The visuals and audio in this game are mediocre. The UI is not particularly aesthetically appealing although there are a number of skins which players can import to mitigate that. The matches themselves are also similarly mediocre with passable graphics. The animations for the players are actually quite good but at times the animation can play out awkwardly in a tackle or with a player almost waddling across the field. There are no ambient sounds or music when you are outside of a match and I resorted to listening to the radio to keep me company while I planned out the future of my team. Matches themselves are largely dominated by the cheering of the crowd which grows in volume as plays are made and teams score goals. With these areas deficient, it’s fairly easy to assume that most of the effort for this game went into mapping and populating the deep simulation of the game. 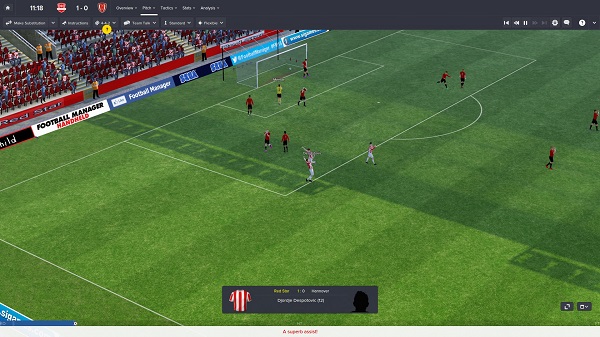 There is a lot to overcome in this game. The steep learning curve, the clunky UI, and the long-term nature of the game mean that it takes a significant investment of time and effort to play it properly. I had to ask for an extra week to work my way through a couple of seasons and even now I feel like I’ve just barely gotten a handle on it. But this game certainly has its appeal as well and can sucker you in if you’re willing to put in the effort. There’s no feeling quite like coming out on top in a league which your team played hard to win… except for maybe winning a sports league in real life (I wouldn’t know). Overall, this game is really quite fun to play but that fun does not come easily or without cost…