The first Final Fantasy developed exclusively for the current generation of consoles has made its way onto Windows in a surprisingly short time frame. Less than two years after its initial release, Final Fantasy XV is now gracing Windows as a bundle with the base game, all previously released DLC, and a few new features for the re-release. Console users will be getting the same package in the form of the Royal Edition re-release and the “Royal Pack” DLC. 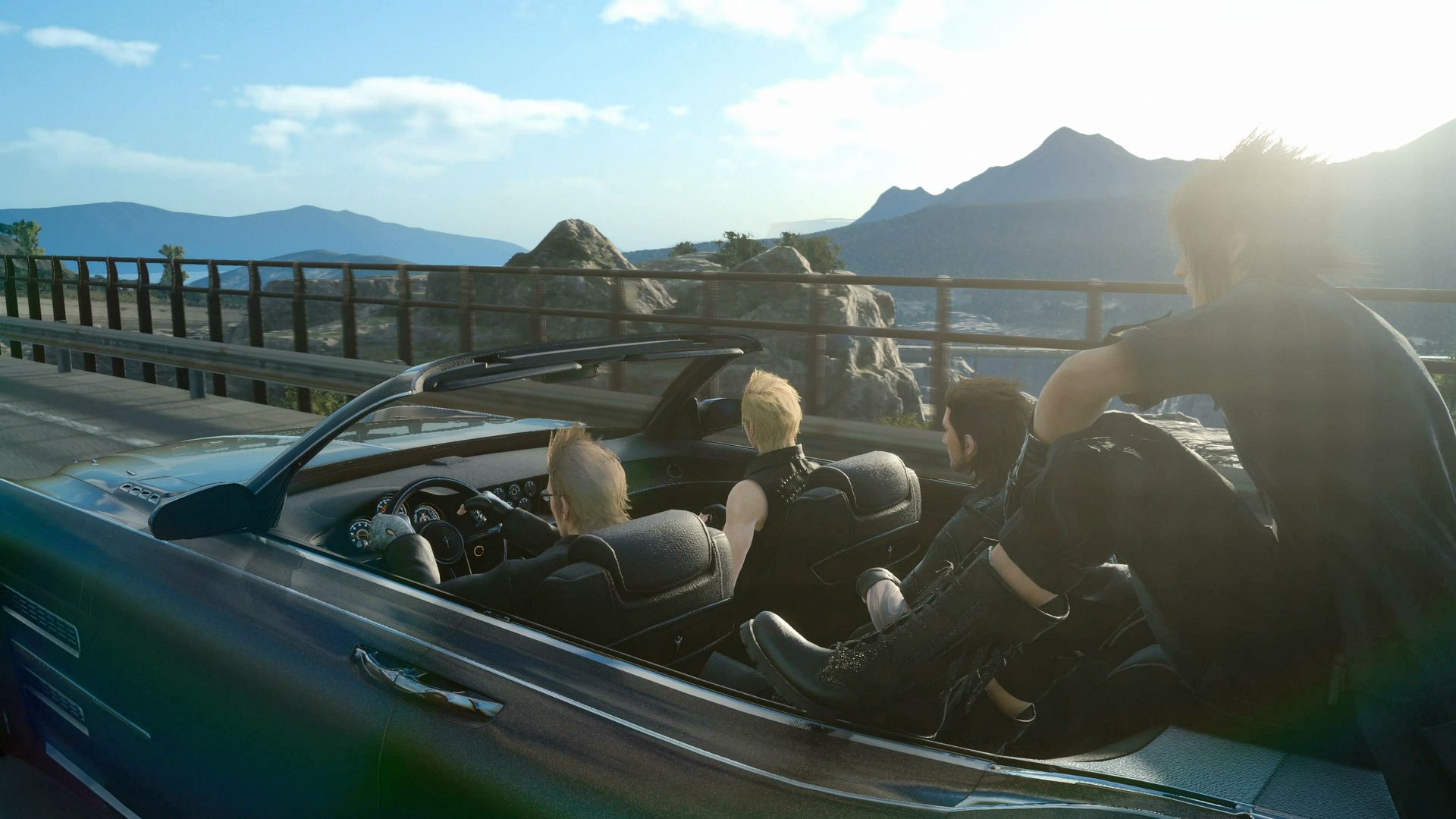 Final Fantasy XV stars Prince Noctis and his three companions as they embark on an epic quest to take back throne from the Niflheim invaders. The game takes many of the franchise’s long running tropes, archetypes, and themes and weaves a beautiful new world that is distinctly modern, yet familiar to the Final Fantasy fan. The dialogue is well written, and the world is incredibly rich.

Likely the weakest part of Final Fantasy XV’s story its slow pacing and how unlikeable Prince Noctis is. The story doesn’t suck players in right away, and it takes a few hours before it starts to get interesting. While the perfect hero is obviously dull, Noctis’ personal flaws stem from the fact he behaves like a spoiled 16-year-old. Noctis’ personal story is very much a coming of age tale, but his early behaviour makes it difficult for players to forge an emotional bond. He is filled with teenage angst, self-centred behaviour, and a general lack of maturity that makes him look like like a millennial stereotype gone bad. 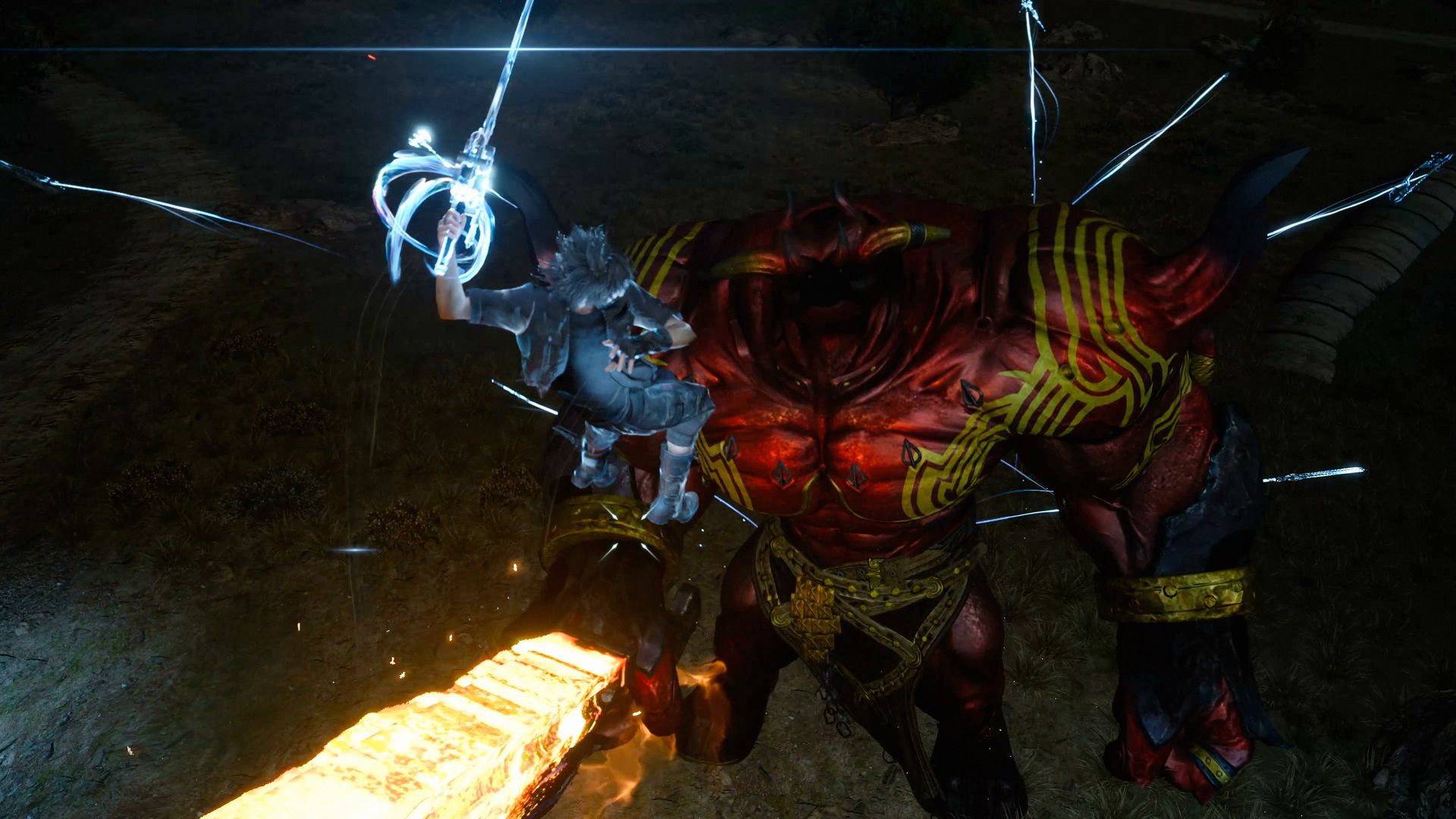 Final Fantasy XV is an open world action JRPG with a touch of life simulator mechanics. Players primarily control Noctis, though the other three characters can also be controlled with the right skills. Combat is an active setting by default, with time constantly moving except when the player is browsing through items. The friendly AI is intelligent enough to generally be left to their own devices. Wait mode is available for players who prefer a little breathing room to plan their next move. When Noct stands still, the game freezes time and displays the current targets of each character on the battlefield. Here, players can scan enemies to determine weaknesses without waiting for Ignis to do so. Wait mode has a generous, but limited timer that slowly refills as action progresses. Combat requires a good bit of skill and positioning as incoming damage hits hard and there are plenty of opportunities to deal bonus damage. Final Fantasy XV’s combat is a happy medium between traditional Active Time Battle RPGs and modern Japanese hack ‘n slash titles.

The weapon and magic system accommodates a variety of gameplay styles. Noctis has access to many types of weapons, ranging from the traditional JRPG sword to revolvers. Additionally, Noctis alone can equip Royal Arms weapons that carry major stat bonuses, enable the Armiger ability, and deal massive damage at the cost of Noctis’ health. Square Enix is continuing to experiment with the magic system. Final Fantasy XV’s magic feels more like alchemy than traditional spell casting, requiring players to mix elements and items together to create powerful spell flasks. The flasks are equipped like any other weapon and behave more like grenades with a lengthy cooldown. It’s a novel take on magic, but it also means that players who prefer to be full blown spellcasters will need to adjust their playstyle to incorporate warp strikes and ranged weapons to fill the cooldown periods. 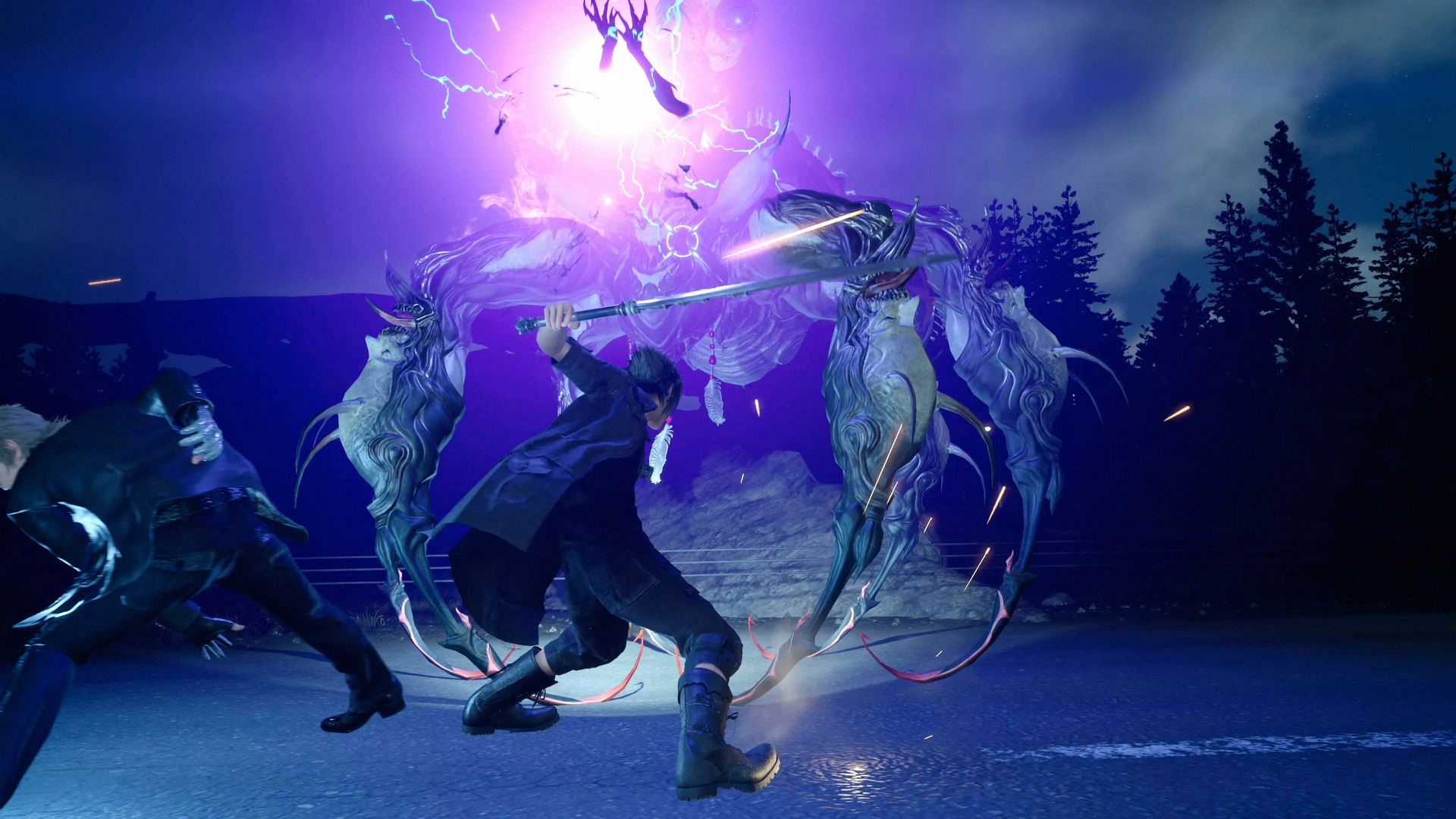 Square Enix is continuing with the Sphere Grid style progression system. The newly named Ascension system provides a lot of flexibility for players to create a build that suits their playstyle. The system puts an emphasis on active effects versus more passive stat bonuses like “+50 strength.” I like the more active nature as purchases give instant gratification due to their more obvious effects. The new stored experience system is a small, interesting change that is designed to encourage players to use rest stops and eat foods for stat bonuses. While it seems like a chore on the surface, players receive an experience multiplier if they are willing to fork out money to stay at nicer hotels. Prudent players can easily rack up the levels with some planning.

The overworld map is much like any open world RPG. Quest givers are scattered around the map with plenty of enemies filling the wilderness between small outposts. There are diverse sets of side quests and activities to keep players busy between story missions. Travel is probably Final Fantasy XV at its weakest. Any serious distance will need to be traversed by either Chocobo or car. In the beginning, the car can be driven automatically by Ignis or Noctis can get behind the wheel himself. No matter what option the player chooses, they will be faced with long, boring car rides as they pull into parking spots and outposts to unlock fast travel points. Players can sell off unneeded items during the automatic car rides, but the length of the car ride far outstrips any selling that needs to be done. The car rides would likely feel shorter if players could manage equipment, magic, or Ascension skills without pausing the game. The manual controls are terrible until the player unlocks the off-road modifications. The car essentially follows a set track, so players only hold down forward or reverse except to turn at forks in the road. Manual control is extremely mind numbing as players don’t have the freedom to overtake other cars or drive aggressively like other open world titles. Once the off-road modifications are finally unlocked, the car behaves more like an actual car and provides some better mental stimulation. Chocobos are significantly more entertaining from the start. Designed to traverse wilderness areas, players have full control of their steeds. However, players must visit an outpost to rent their steeds for a period of time. 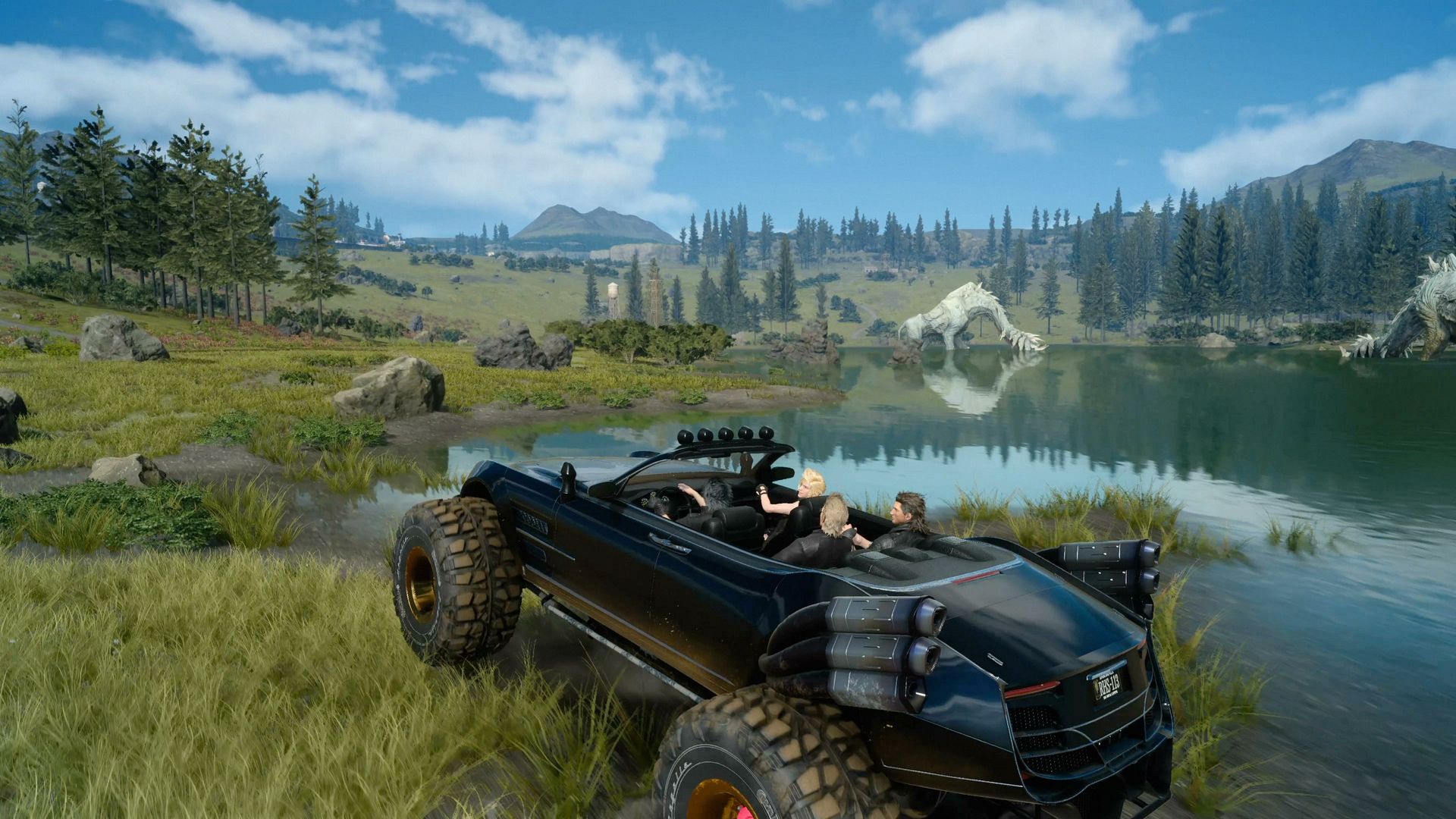 Final Fantasy XV is probably one of the best ports from Square Enix’s Japanese studios. A partnership with Nvidia has yielded an excellent set of graphical customization options, and the game ran smoothly on my system. The mouse and keyboard controls work incredibly well and almost everything can be rebound. It’s a clear improvement over some of Square Enix’s recent port jobs. The port isn’t perfect though, the game has some issues when a mouse and keyboard plus a controller is plugged in, and the game is struggling with some hitching and long load times. Long time modder Kaldaien has stepped into the breach once again with his Special K mod tool that addresses some of the issues, but it’s a shame that a modder needs to fix what should be Square Enix’s crown jewel.

Final Fantasy XV is a gorgeous looking game. The art style is Japanese fantasy’s take on the modern world. The world is bright and beautiful. Considering the game is about an year and a half, it has aged well so far.

The audio experience in Final Fantasy XV is enjoyable. The soundtrack is a pleasure to listen to, and the sound effects are good. While the game comes with Japanese voice acting, the English voice acting is solid. There are a few awkward lines here or there, but it is not enough to detract from the overall quality. 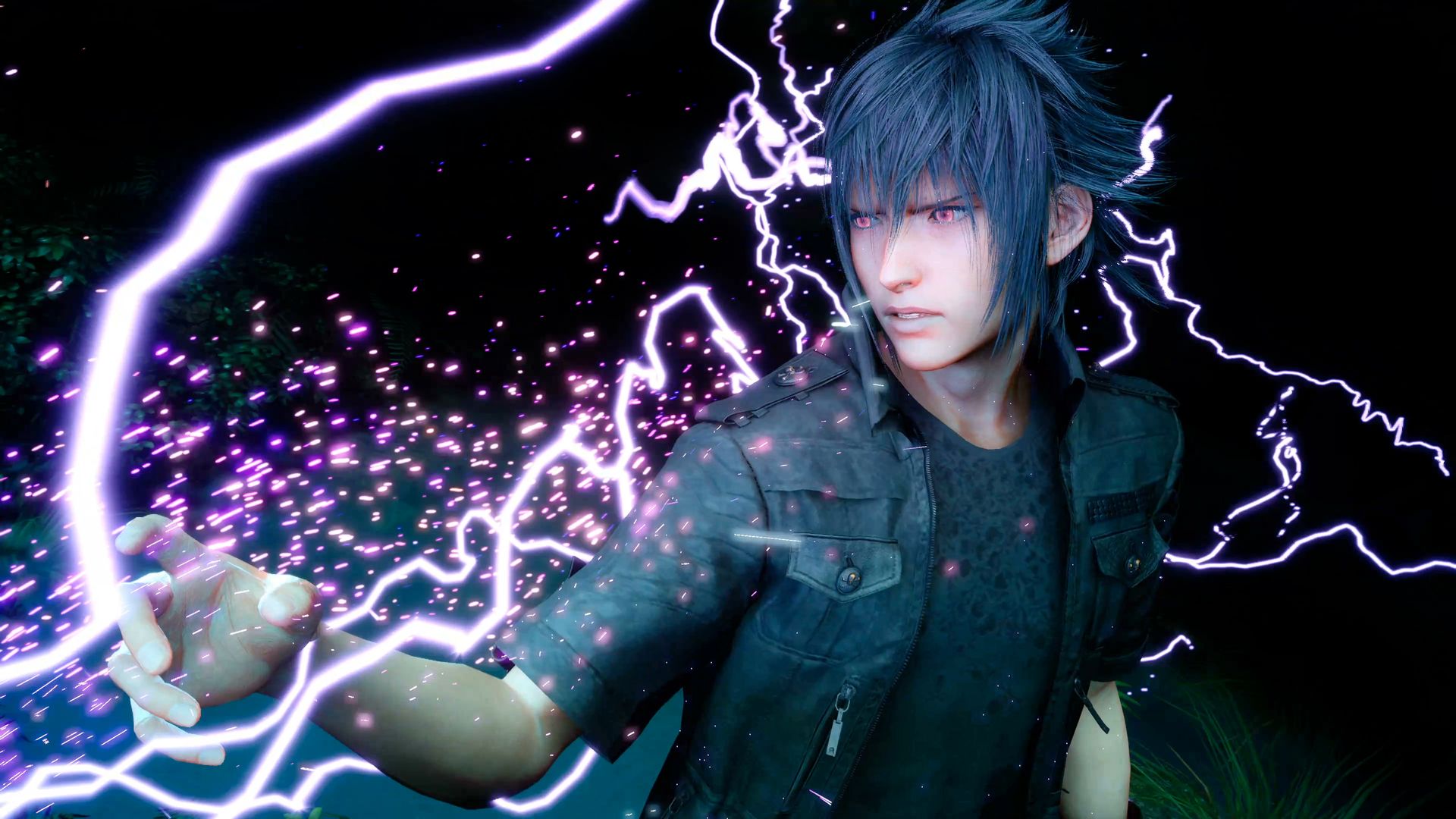 Final Fantasy XV Windows Edition is probably one of the better ports to come out of Square Enix’s Japanese studios. The port is not perfect as there are some minor technical issues that still needs to be ironed out, but it is still a good example of what PC gamers expect from a port. While Final Fantasy XV delivers a generally solid open world RPG experience, its issues with early game transportation, slow story, and an unlikeable main character holds it back from being the perfect Final Fantasy experience.

While not perfect, Final Fantasy XV is still a solid port of a strong game.
8.5