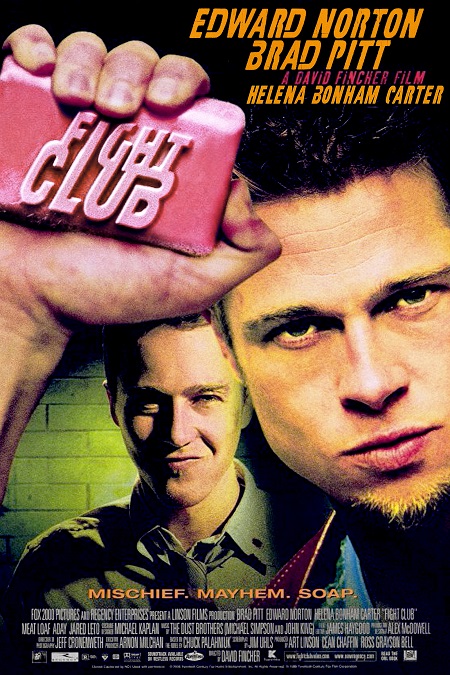 Fight Club is one of those cult films which I was absolutely obsessed with in my misspent youth. I loved the film’s style, tone, and anti-capitalist message which all struck a chord with me as I came into my prime. Unfortunately, I had never gotten the chance to see the film on the big screen until I was invited to cover the In the House screening of it last week. With great eagerness I looked deep inside, communed with my power animal, and slid on down to George St cinemas.

Our MCs for the evening were Jason ‘Jabba’ Davis and David ‘Quinny’ Quinn who warmed up the audience in regular In the House fashion by playing ‘scissors, paper, rock’ played with the whole audience. When the audience was whittled down to the final winner (who walked away with a jetboating prize), the MCs sat down to chat and joke about the film. I liked, in particular, the anecdote they shared about the author of the book the film was based on, Chuck Palahniuk, being inspired in his own brush with ultra-violence. Namely, Chuck ended up being severely beaten up in an altercation with someone over a holiday weekend and turned up to work on Monday covered in bruises. Far from having to explain his injuries awkwardly to his co-workers and colleagues, as one would imagine, everyone pretty much ignored him and so the concept of Fight Club was born. 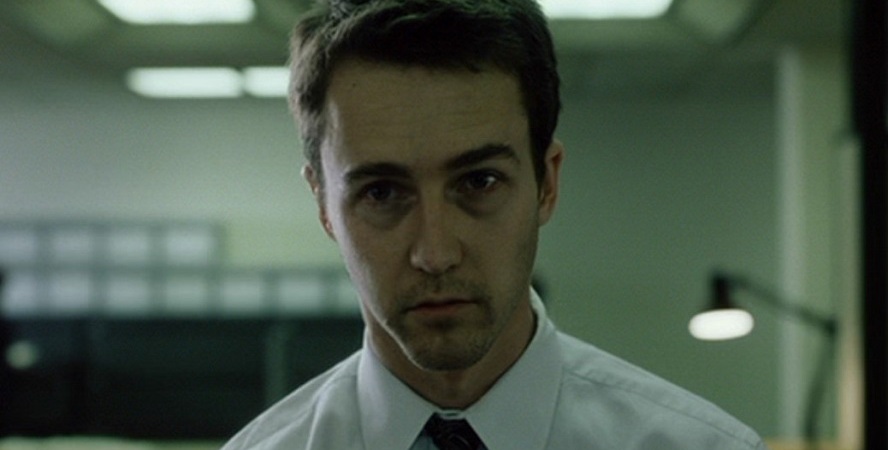 The film’s narrative revolves around the unnamed narrator (Edward Norton) who starts the film by being held hostage by Tyler Durden (Brad Pitt). Through flashback we see how the characters got to that point which essentially starts with our protagonist having difficulty sleeping due to the loneliness he feels in modern day society. He cures his loneliness by faking all sorts of illnesses to attend self-help groups. His peace is disrupted, however, when Marla Singer (Helena Bonham Carter) begins to do the same thing and forces him to confront the truth of his situation by reminding him of the lie he is living. Following the arson of his apartment, his befriending of a charismatic stranger on a plane, and his desperate attempts to find connection with other people he inadvertently kicks off a revolution which might bring Western Capitalism to its knees.

Norton is perfectly cast as the narrator and his phlegmatic monologues as the film’s notional protagonist is what absolutely seals the deal with the script. His dry, flat delivery totally reflects the emotional numbness that we’re meant to believe this character is experiencing. Norton’s wiry and lanky stature serve him in good stead as his somewhat unusual appearance cements his status as an outsider. Despite this, however, I feel most people would still be able to connect with and identify with his character. 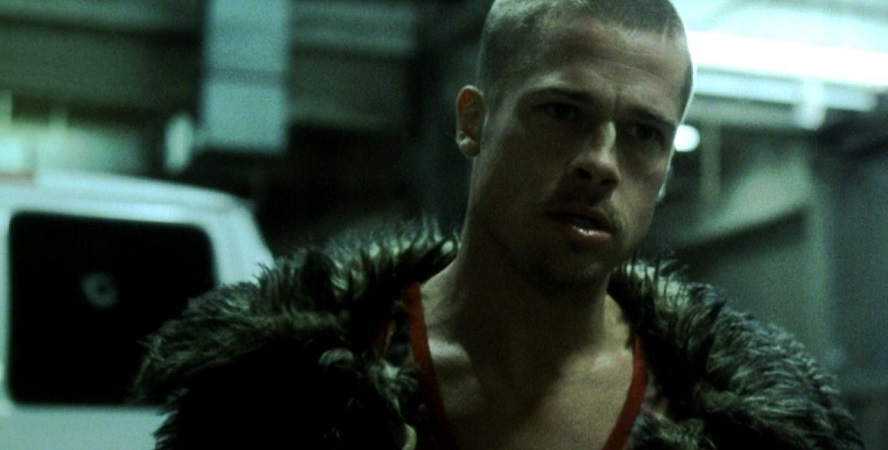 On the other side of the coin, Pitt’s performance as Durden is absolutely spot on as the foil to Norton’s narrator. Pitt’s performance gives Tyler charm, charisma, humour, confidence, and healthy helping of vindictiveness. He’s pretty much the personification of everything that conventional masculinity teaches men to aspire to. On many levels, I feel that Tyler’s appeal to the popular consciousness owes a great deal to Pitt’s roguish charm. Whereas I feel Norton’s character may be the one the audience identifies with, Pitt’s Tyler is the one we idealise… for better or for worse.

The film’s script is damn near perfect with the pretty much every line inducing you to rage or laughter at the film’s depiction of modernity. The film’s analytical, reflective awareness of capitalistic and consumerist culture has a distinctness to it which you rarely see in Hollywood productions. In particular, the climax of the character arcs of our narrator and Durden is also one of the best cinematic reveals I’ve ever seen.

This film’s narrative works on numerous levels for whatever level the audience wishes to engage with it. If you wish, you can simply accept the film on face value and get on board with Tyler’s supposed revolutionary mentality and rejection of consumerist masculinity. The primitivist anarchism espoused by Durden certainly has its appeal with I’m sure many people yearning for a nostalgic return to simpler times but the film has more depth than that. The supposed rejection of manufactured masculinity by the members of the fight club and later project mayhem were it not for the case that the leader of this movement pretty much fits the mould when it comes to conventional male attractiveness. Not to mention the fact that the supposedly leaderless anarchist organisations of the fight clubs and project mayhem are very clearly regimented with and hierarchical with Tyler ruling with what is essentially an iron fist. Fight Club is able to cater to every level of intellect and engage audiences at whatever degree you would like to. 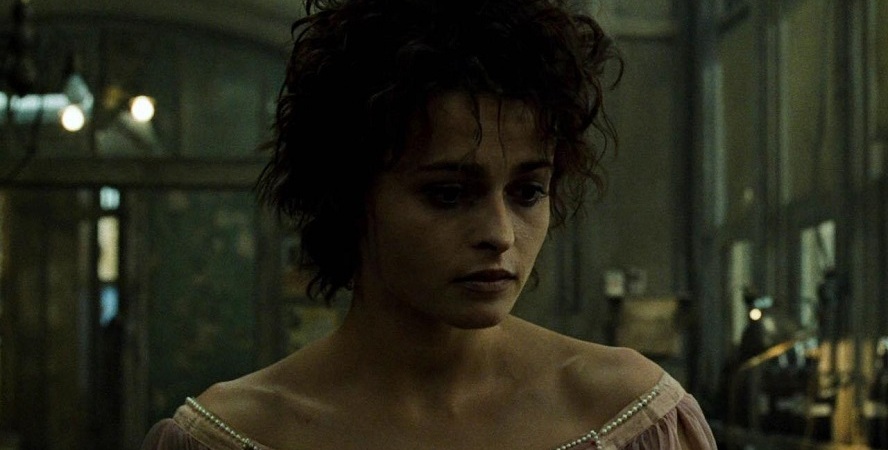 The visual direction is par excellence with Fincher using montage to create a film which is capable of addressing complex existential concerns on one hand and showcasing gratuitous ultra-violence with the other. Fincher plays with the cinematic medium the way that only a master truly can to make something truly beautiful. His shots are carefully constructed to not just show us the action of any given scene but give an emotional impact as well which at times helps to put us into the mindset of a character or to throw us completely out of it. This film makes is able to make reference to itself as a film numerous times but due to this strong direction by Fincher, you don’t get thrown out of the experience. 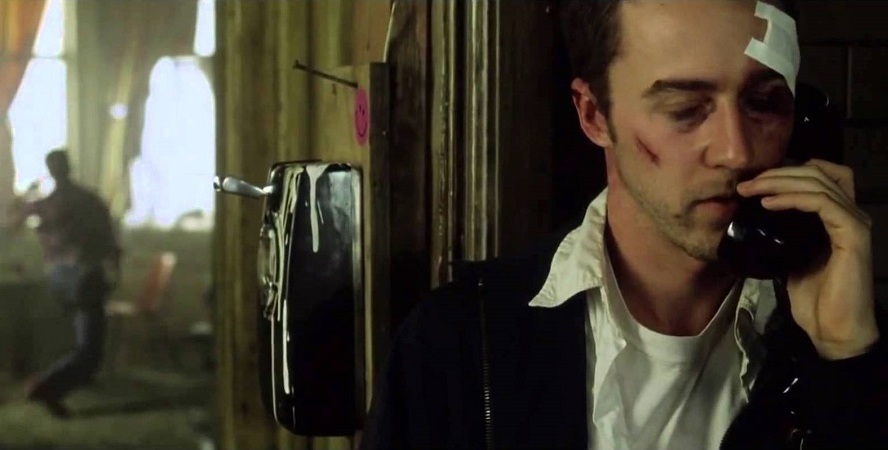 The film’s soundtrack is perhaps one of my favourite soundtracks of all time. Fincher is a master of setting tone to his cinematic and the film’s soundtrack works double time to match the film’s offbeat narrative and themes. It sounds very industrial as the tracks make use of all kinds of sounds from photocopier noises to a telephone ring all put through some sort of distortion. It creates a surreal soundscape which generally has a thumping beat to get the blood pumping and the audience amped for the film’s narrative beats. The film’s closing credits are made unforgettable the moment when the Pixies Where is my Mind? comes on. The casual acoustic guitar coupled with the offbeat vocals and growing distortion of the song perfectly matches the tone of the film and creates an offbeat but strangely comforting climax to film. 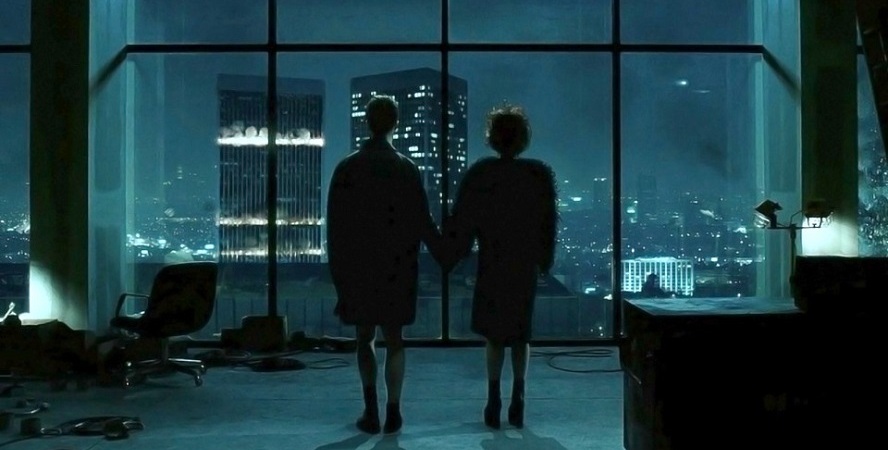 Overall, I very much enjoyed the In the House screening of this film and found it to be a worthwhile film to watch on the silver screen. The writing and performances were stellar with our two leads creating an excellent juxtaposition. The film’s visual style is captivating with a strong sense of style throughout which can be equal parts beautiful and disturbing. The soundtrack is similarly of a high quality and tone to match the film’s thematic concerns perfect scoring. There is pretty much nothing I can really fault this movie for and I’m very glad to have been invited to attend the screening by the good folks down at George St. Kudos to In the House for screening this film! 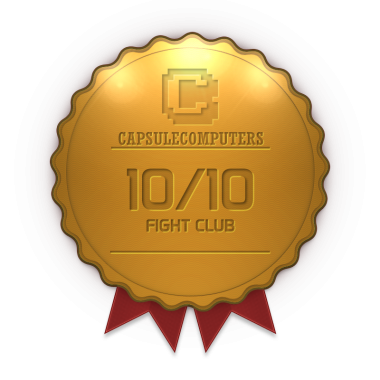 Fight Club features an amazing script paired with awesome visuals and a great soundtrack to create a damn near perfect movie.
10