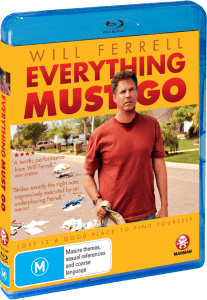 Overview
It’s always interesting to see an actor play a role that is slightly out of their element, especially one who has continued to keep me in stitches through his various movie and television roles. It’s always a risk as well, as to how audiences will react to an actor they are so used to seeing playing a similar persona, when cast within a totally different media environment. While other actors in the film such as Laura Dern have played wide and varying roles across their careers, Will Ferrell has stuck mostly to the same genre, excelling in his roles as the penultimate man-child and delighting us with his borderline manic character portrayals. So the ultimate question is; Does Will Ferrell seem as out of place as Al Bundy in anything but Married with Children?

The answer thankfully is no, not ever during the entire duration of the film was there any hint that Ferrell’s natural comedic behaviour was going to unconsciously appear at random and put the whole tone of the film out of sync. Will Ferrell, for me, is not dissimilar to John Cleese in that even his comedies have a much deeper and darker underlying tone to them. From the manic and moody Jackie Moon, to the reclusive yet borderline genius Chazz Reinhold who picks up potential “one nighters” at funerals, as according to him “ it’s like fishing with dynamite”, there is always a sadness to Ferrell’s characters that seemed to allow him to make an easy transition to Nick Halsey and his mundane existence. Thankfully the story is also a whole lot deeper than what is on the back of the Blu-Ray case. 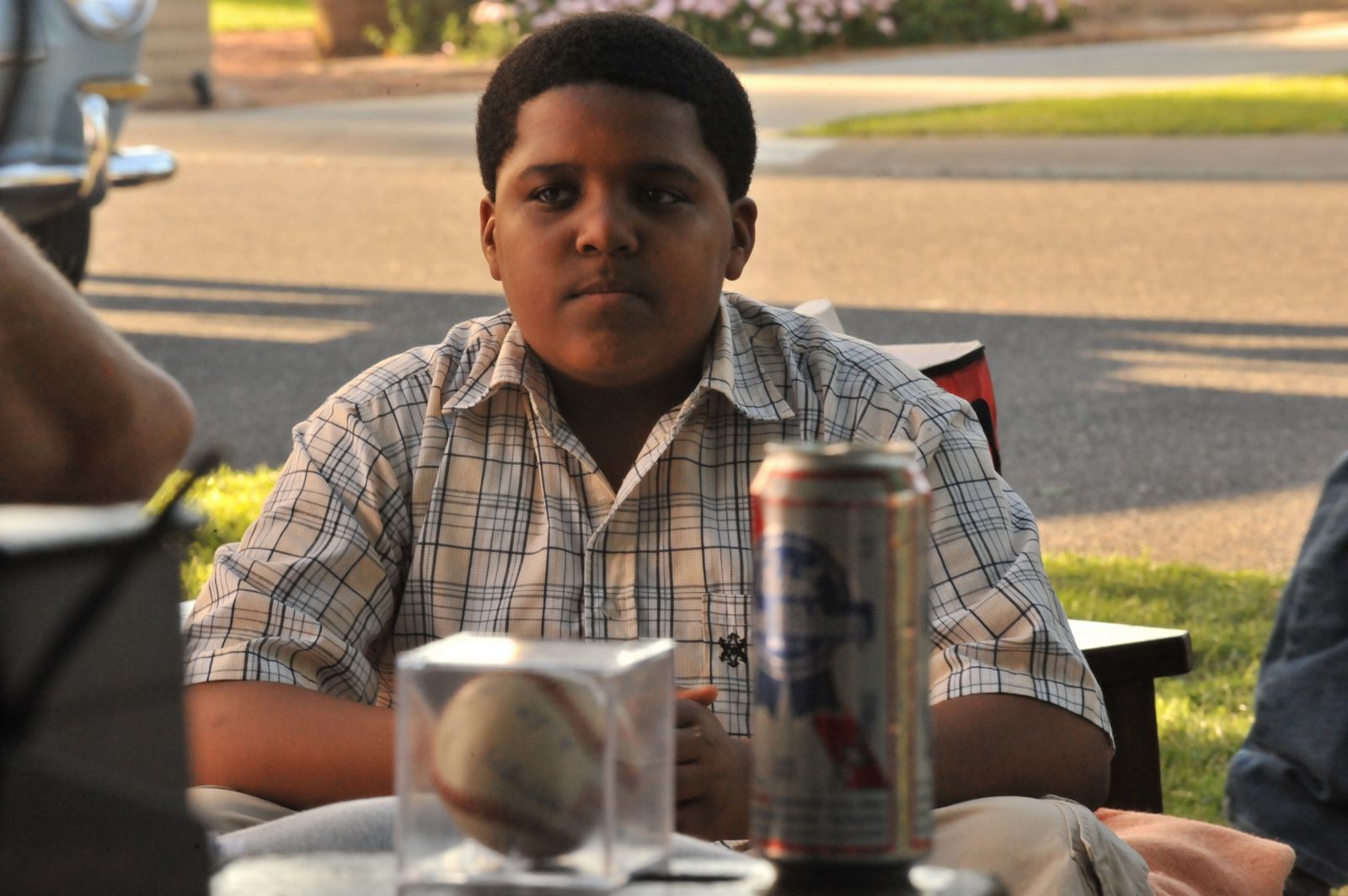 Story
Nick Halsey is not what you would describe as a complete screw up, just a very lost soul that has used up his last chance, seeing his career flushed down the toilet and his marriage in tatters. After an illustrious career with the bottle, Nick finds himself jobless and upon returning to the quiet suburbs where he lives, finds himself greeted by all his worldly possessions strewn across his front lawn, his locks freshly changed and his wife gone thanks to an alleged adultery incident. Having no one to turn to, nowhere else to go and no money, Nick sets up camp in his front garden, intent on staying put until something better comes along (and you get the feeling a lot of his life decisions have been left to this method of thought). Thus begins his journey into what in his mind is a quest to win back his wife, but is in reality a journey to win back his life and soul. Even from this early point in the movie we can see the destructiveness of alcohol on relationships, through an exceptionally sad scene where Nick is asked about his indiscretion while on a work function and had to quietly admit that he was so inebriated he couldn’t remember whether any adultery had even taken place.

Needing some good old fashioned booze to numb the pain, and turned down by the attractive new woman to move in across the street, Nick reluctantly puts his trust in Kenny Loftus, a neighbourhood street kid, to keep an eye on his stuff. Right from this point, where Nick loses his keys amongst the mess and has to ride Kenny’s bike to the store, Nick begins to show the incompetency’s that have landed him in his current position. While many movies focus on hardships that are way beyond someone’s control, Dan Rush has set the perfect atmosphere to show Nicks hardships to be almost completely of his own doing. Even his own sponsor, Frank (Michael Pena), despite being the local detective and keeping an eye on him, has a defeated tone when talking to Nick, knowing his self-destructive personality cannot be easily reasoned with. 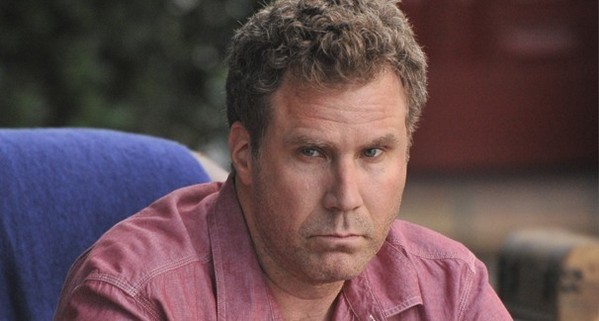 Where others try and fail to alter Nicks behaviour it is only Kenny ( Christopher Jordan Wallace), who manages to chip holes in Nicks defences despite being initially made to feel as welcome as the local dog. Through his relationship with the sad, lonely and heavily pregnant Samantha (Rebecca Hall), we see how even in such a fragile state, the tables can be turned and someone who looks like they are in need of help can actually offer a great deal of insight and wisdom of their own. Apparently, and unfortunately for Nick, it is illegal in his neck of the woods to reside within his front yard, regardless of the fact that he owns the property. Fortunately, thanks to some weird and wacky law (as is common in various states across America so I’ve heard), Nick is allowed to run a yard sale for up to 5 consecutive days, biding him some valuable drinking time. Not wanting to actually sell any of his things and lose the only memories he has of better days gone by, it is Kenny, working for a measly few dollars that attempts to clear out the junk and hopefully Nicks mind in the process. 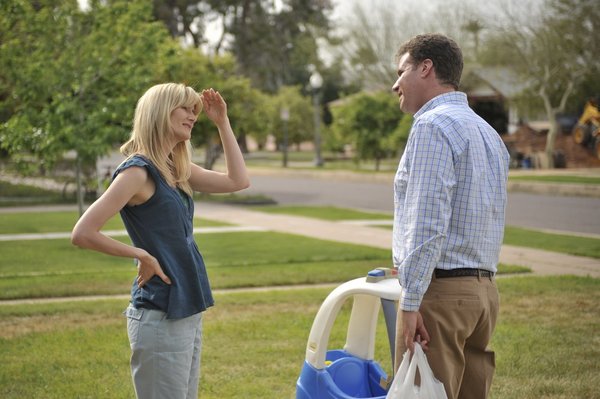 Without giving away too much more, I would like to place an emphasis on the exceptional feeling of frustration and sympathy the viewer feels for Nick. Additionally he has no concept of the sadness and hurt he is radiating upon the only people willing to stick by him. It is no more evident than seeing the sadness in Kenny’s eyes when Nick can’t stick to his end of the bargain and teach him how to play baseball. Similarly the embarrassment and sadness felt for him as he regresses into the past and looks up an old high school friend (Laura Dern). The relationship between these two although very brief was very important in showing Nicks state of mind and just how fragile he had become. Although it didn’t by any means pull him away from the mindset he was in, his characters demeanour and behaviour was changed by the encounter. 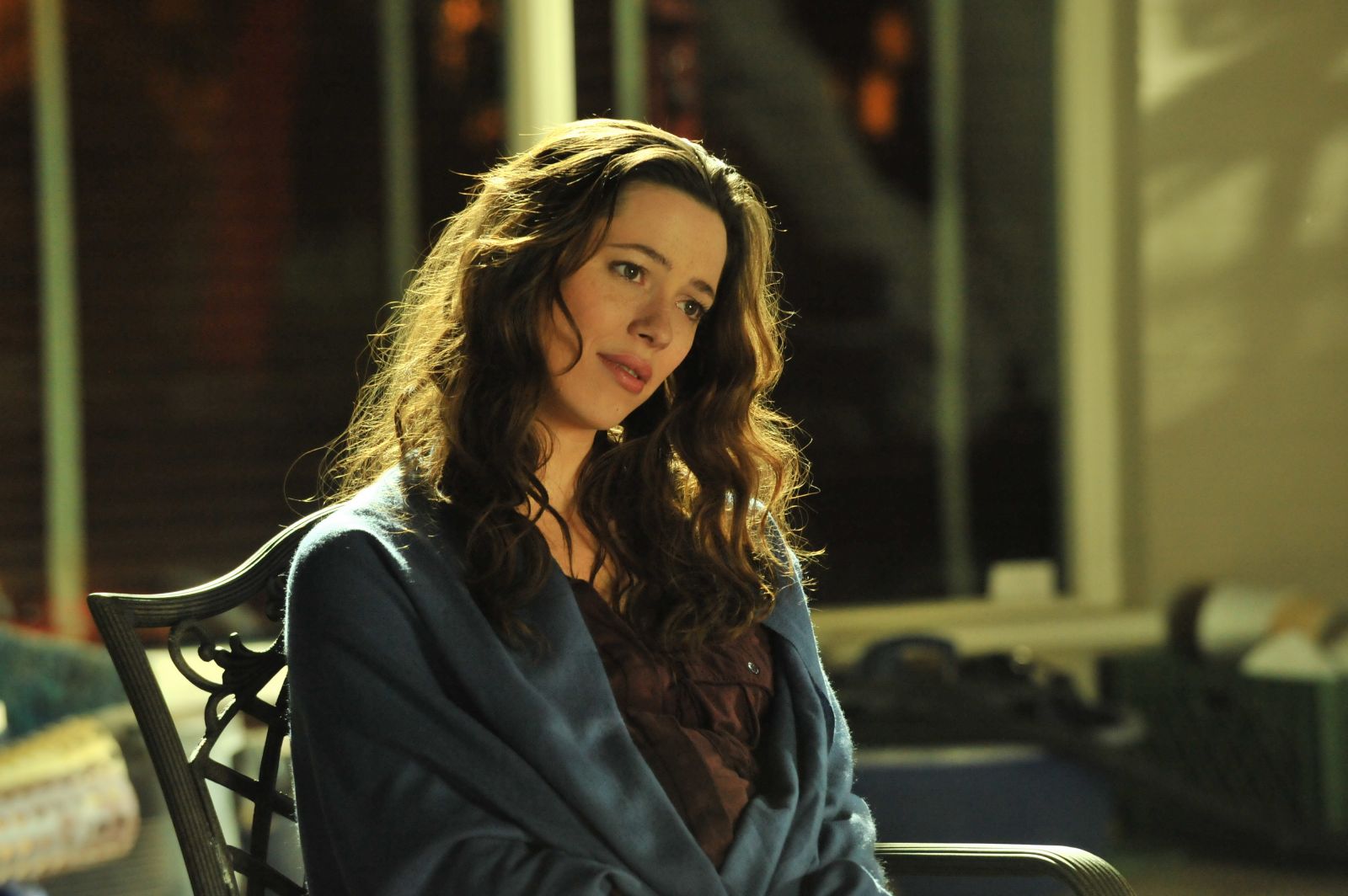 Visuals
Everything Must Go is not the kind of film that requires ridiculous special effects and explosions as well as city wide destruction to distract viewers from its weak storyline and get its point across. The quiet streets and modest houses set a perfect scene for Nicks current state of mind and truly convey the mundane existence he has created around himself. The acting is very strong throughout the film and had to be due to much of the camera work which has the actors much closer on screen and more exposed. What this also succeeds in doing is presenting a much more intimate connection between the characters and the viewer. In terms of the actual visual quality of the film, the attention shown to detail is superb, with every whisker on Ferrell’s unshaven face clearly evident. 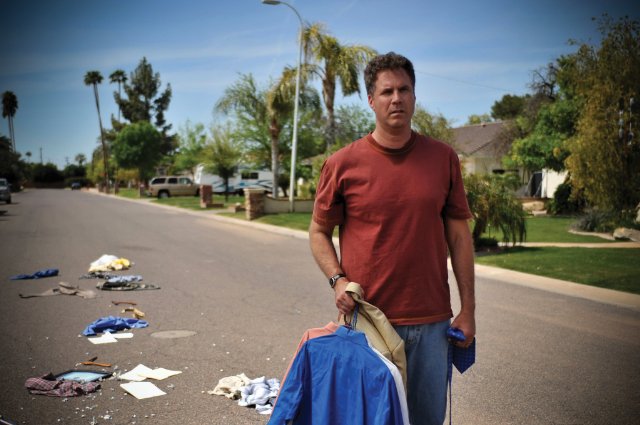 Audio
The background audio is very quiet and needs to be as such to place more of a focus on the dialogue which is paramount to the differing chemistry between the various characters. Truth be told, anything loud or abrupt would have detracted from the overall melancholy yet comedic feel of the film and detached the viewer from Nicks pitiful world. I have to admit that side from John Lee Hooker and Canned Heat, I have never heard of any of the artists that played on the soundtrack. Saying that, it was perfectly orchestrated, with each song being coupled and integrated within the changing mood of the film and Nicks destructive mind.

Extras
Although I’m always interested to hear Will Ferrell speak, there’s nothing overly of interest in the extras section. There is audio commentary with the director and Michael Pena who plays Will Ferrell’s character Nick’s AA sponsor which is interesting but nothing out of the ordinary. Apart from that, Ferrell speaks briefly about his hardships regarding making Nicks character believable, as well as the stock standard Behind the Scenes and deleted footage. Again nothing overly amazing but some interesting additions nonetheless to a fantastic film. 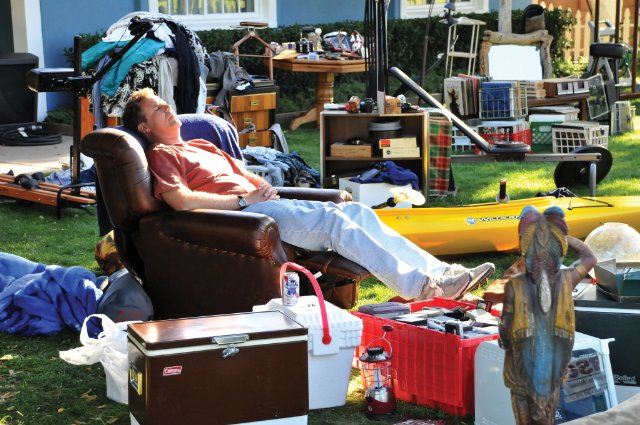 Overall
While the storyline is very strong in itself, it is the shining performances from Ferrell and Wallace that give true meaning to, and highlight the fragility of life no matter what your background. It is a tremendous relationship of learning and understanding between one character who has complete control over his decisions but chooses to self-destruct and another who has very little control but is resilient and accepting. There are some moments of true sadness, where the tone of the film changed from sympathy and sadness to reveal humans in their lowest form as Nick begs for alcohol from passers-by outside the Liquor store. It’s hard to watch this kind of a scene without being reminded of and forced to think about alcohols role in society as an accepted product. There is also a nice twist at the end of the film and it was welcoming and refreshing not to have the typical happy fairytale ending, but rather be left with a still somewhat desolate character whose journey is far from over.