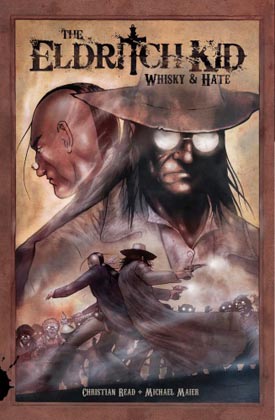 There is just something about the Wild West. From the rolling deserts to the tales of savagery, lawmen, horses and outlaws, it just has a sense of danger about it. It is this sense of danger that Christian Read and Michael Maier have tapped into with The Eldritch Kid: Whisky & Hate. By mixing the dangers and struggles of citizens of the Old West, with a dark and demonic supernatural element, the pair have created something that stands among giants and proudly puffs out its chest. From Maier’s subtle watercolour inspired art, to the strong sense of complexity in Read’s characters, The Eldritch Kid: Whisky & Hate is a book that should definitely be on your radar. 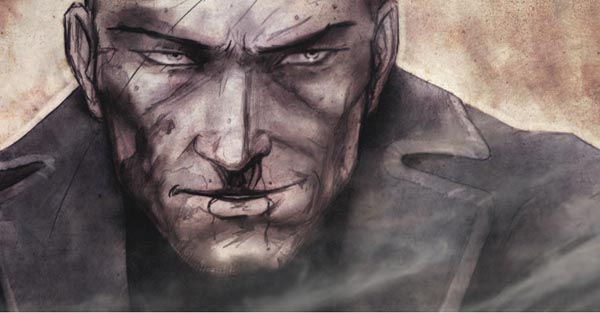 Set in the Wild West after the conclusion of the Civil War, Eldritch Kid centers around a native-American shaman by the name of Ten Shoes. Ten Shoes has long since been excommunicated by his tribe, and has gone to Oxford to earn an education. Despite going to Oxford and earning a degree that puts him leagues ahead of many of the people he interacts with, Ten Shoes is still seen as a ‘savage’ or an ‘injun’ by those around him. He works as a scout for a new ‘tribe,’ a convoy of settlers making their way across the rolling desert. Even though they treat him with disrespect and scorn, he does his best to protect them from the supernatural threats that lie in wait … because that’s what a shaman does.

As part of his duties as a scout, Ten Shoes runs into some demonic trouble, and in the midst of it is a man, stripped naked and bound. After a heated exchange between the two strangers and the demons around them, Ten Shoes finally learns that this man is the fabled Eldritch Kid. Kid’s stories have become legend around those parts, to the point where penny magazines are even printed, detailing his adventures. Kid remains quiet about his past, and even on his status as a hero. It isn’t fair to call him a reluctant hero, because he doesn’t see himself that way. Rather, the Kid’s own words speak volumes; 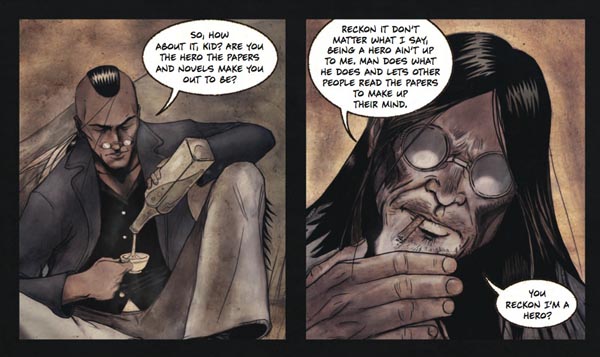 The best way to describe The Eldritch Kid is that it is part Lone Ranger (not the new Disney one) and part Supernatural (the TV Series). As the two set out through a tiny town that has seemingly popped up overnight, both know that something is amiss. It doesn’t take long for the demons to show themselves and cause havoc. Havoc that the two unlikely heroes have to face together. Each character taps into a mystical force in a different way, with Ten Shoes communing with a frog that enchants his shotgun to fire lightning bolts. I can’t tell you how the Kid’s backstory ties into the occult without dropping some serious spoilers, so you will just have to pick it up for yourself (I will say however, that it will be an unexpected twist for anyone reading).

The story is told in such a way that it feels like a television series. From the pacing to the tone, and even the way that the book handles its flashbacks, everything feels like it was made to tv and simply adapted to a book. The television-style pacing gives the book a very unique feel even among its peers. There was an extended flashback to the Kid’s past that felt like it would have made more of an impact in a later installment.

While the back story managed to add a lot to the Kid’s personality, it stripped away a great deal of the mystery and aura surrounding him ( not to say that there isn’t still a tonne about him we don’t know). I feel that if it was presented in a medium with a more frequent release scheduled, such as TV that this would have been a defining moment later in the series. However, it isn’t really fair of me to compare this book to other mediums, so for the tone and setting it worked perfectly well.

It is quite clear from the ending of Whisky & Hate that the story of Ten Shoes and the Eldritch Kid is far from over. Having overcome one set of demons, and deciding to partner up for the foreseeable future means that the two are almost certainly to encounter more monsters, and more people to save as the series progresses. Hopefully Read keeps the story fresh and avoids it becoming a “monster of the week,” kind of deal.

I have mentioned TV quite a few times already, and not just because it feels like a TV series printed on paper, but rather it feels like it is MADE for television. The Eldritch Kid could fit in perfectly with the current school of supernatural themed television shows, and its western theme would make it an absolute killer that stands apart from the rest.

My usual turn of phrase when it comes to describing great artwork is that it ‘literally jumps off the page,’ but that isn’t quite true of Maier’s work. That isn’t to say that the artwork is by any means bad, it is really impressive to look on, but a lot of the work has a subtler approach. The book looks like it was painted with really washed out water-colours, only leaving traces of their original colour behind. For any other setting I don’t think this would work, but the Wild West feels like a perfect fit for this particular brand of painting. Aside from being washed out, many of the colours are mixtures of grey, blue and brown, which keeps a drab, somber tone throughout while also capturing the spirit and look of the Old West. 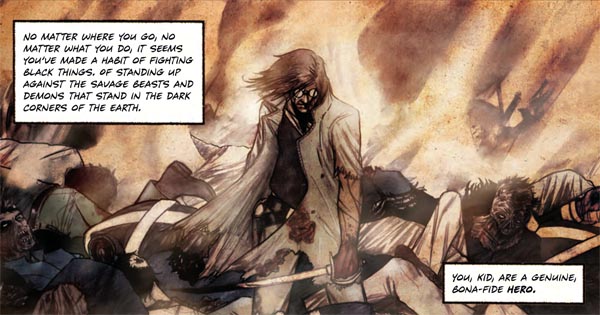 While a lot of the backgrounds and characters are subtly drawn, there are some things that definitely do leap off the page at you. The demons are a prime example of this, as their appearance is an abomination against the landscape, and this really shows through on the artworks. The demon’s are usually coloured in dark reds, which make them stand out from the greys, blues and browns of the rest of the book. The godly apparitions also fit this description, who themselves emanate a brilliant white light that puts them apart from the rest. Even Ten Shoe’s frog deity’s eyes glow a brilliant white as it uses its magic, capturing the audience and letting them know that he is a character of true power (despite being a frog).

Blood is probably the last detail that really stands out from the page, and this is good because the book takes sharp turns into “violent” territory very quickly. Blood, much like the demons that typically cause it, is darkly coloured and saturated, very much the opposite of the remainder of the artwork. The stark contrast between the washed out colours of much of the book, and the thickness of the blood adds a real weight to it. You feel as it something terrible is happening just from the colouring alone, which is a rare talent indeed. 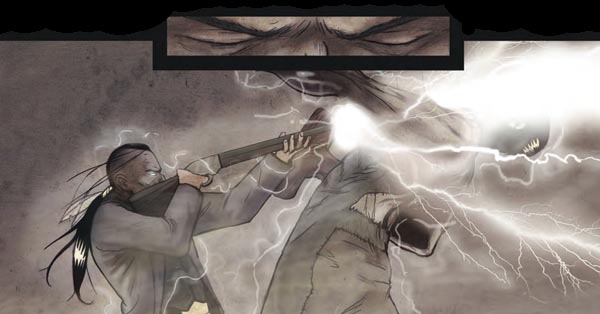 The Eldritch Kid: Whisky & Hate is half Lone Ranger, half Supernatural and all balls-to-the-wall awesomeness. With Read’s unique storytelling, coupled with Maier’s brand of watercolour inspired art, there is nothing stopping this book becoming an absolute best seller. The book feels like a TV series as you read it, which works highly in its favour (if only we didn’t have to wait between issues), and the characters of Ten Shoes and the Kid are as complex as they are tortured. This book is clearly just the beginning of a story that fans will want to be a part of for a long time. So saddle up, holster your weapons and grab this book now.