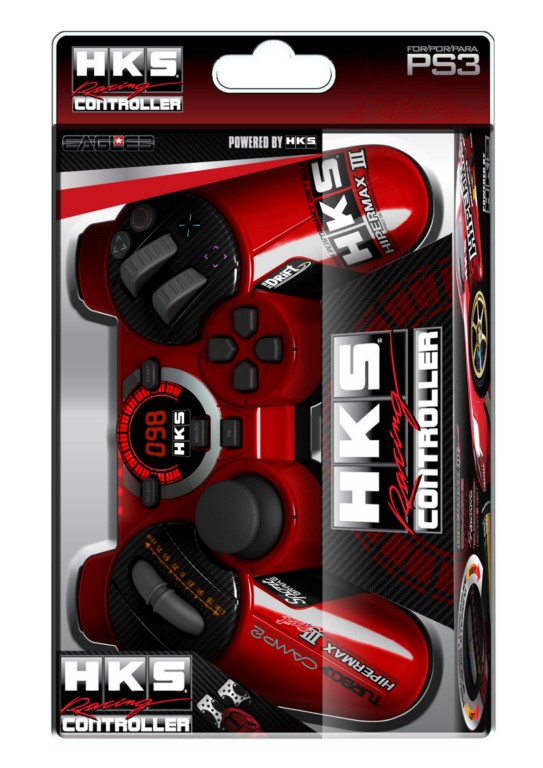 It is no secret that to have the best racing experience possible, you need a steering wheel.  But adding a steering wheel can be more expensive than a regular controller and it takes up space.  That is where the HKS Racing Controller comes in.  Designed by EAGLE3, this controller is designed to  marry the best of the controller world and the best of steering wheel world to create the ultimate Zen for driving perfectionists.  Does it really work?  Is it a crazy awesome idea or a total bust?  Can a controller be considered sexy? Is that a creepy question to ask? Read on, my dear friends. 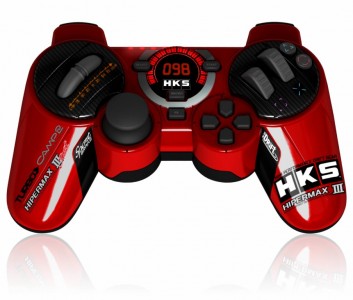 I have to say, they are at least two standouts in the hardware department for this controller.  First up is cable length.

That may seem like an odd thing to praise.  However, I have been in plenty of situations where a few extra feet of cable would be greatly appreciated.  And really, when a company skimps on cable length, they either have not done their research on what consumers want, or they are just trying to save a few dollars on each product.  Personally, I don’t mind paying the extra $2 just so I can position my equipment wherever I want.  And the HKS Racing Controller let me do just that.  My Playstation 3 is at least 10 feet away from my gamer chair.  And when I lean back, conventional wired controllers just don’t cut the mustard.  But the HKS Racing controller has about 12-15 feet of wiring, and that is awesome.  Utterly epic, to say the least.  Unless you have a 70″ monstrosity of a television, this controller will work at distances appropriate for anyone.

Second is just general look, feel and quality of the model.  Just looking at the screenshot, you know this controller will feel nice in your hands.  It is much lighter than regular controller due to the fact that the battery pack is not there.  Plus the whole thing is red.  Everybody knows that red is awesome.  Although it is light, it still feels like a quality piece of work.  As in, I wouldn’t be too concerned if I let my 7 year old niece play with it.  And, although this may be a turn off for some, the controller has sponsor logos all over it.  Rather than detract from the experience, they actually complement the color schemes nicely and they are as smooth as the rest of the controller. You will not feel them at all.

Finally, one great part about the hardware is the customizable buttons.  Yup, just press the Macro button, then press the keys you want to edit.  However, not all buttons are editable.  I hope they fix this if they release a sequel to this controller. 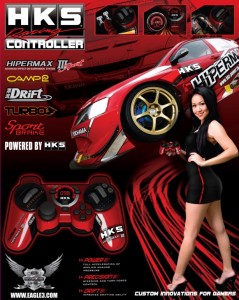 This is what it all comes down too.  Does the controller work?

As you can see, the controller comes with modified buttons, including a mini “steering wheel” and pedals that mimic gas and brake.  It was disappointing that I could not test this out with Gran Turismo 5. (Damn you Gamefly!)  But I was able to test it with nail’d and Motorstorm and I can confirm that it works well.  The steering wheel works well enough, as do the pedals.  It was difficult to get used too at first, especially using the controller in menu selection.  But, after figuring out all the quirks, it is very nice to play racing games with this type of controller.  It is extremely sensitive and it may take many people by surprise.  I found that I preferred regular controls, simply because I am more of a nervous type of guy and the controller was too sensitive for me.  But, for fine tuned games, this will be a great addition.

Another minor kink in the design of the product is the speed monitor they installed in the center.  It is supposed to monitor your speed.  However, it does not actually really serve any purpose, that I could find.  And, although it adds some small aesthetic design, it is worthless.  In fact, the money spent on adding it in could have been better used on other areas of the product.  Who actually looks at their controller while playing games anyway?! 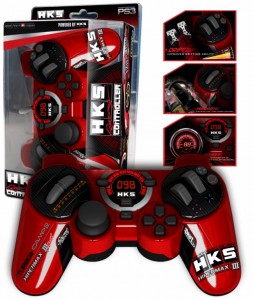 The HKS Racing Controller is an awesome piece of hardware.  Xbox 360 support and minor design changes would be very welcome though.  A steering wheel is still the best option for games like Gran Turismo and Forza.  But this controller is still amazing.  Plus, it is cheaper and has virtually no flaws, other than the minor ones mentioned above.  It is a good deal and a damn good looking one too.  Also, the last question in the first paragraph can be considered creepy, but only a little bit.

I give the HKS Racing Controller: