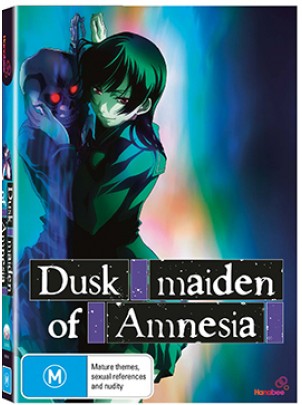 Overview
We all know the story. Boy meets girl, boy befriends girl, boy and girl start a school club together…also girl is a ghost. Ok so maybe not the most traditional story. Dusk Maiden of Amnesia is a story of love, loss and pain. But I guess the more pressing issue is do you believe in ghosts? 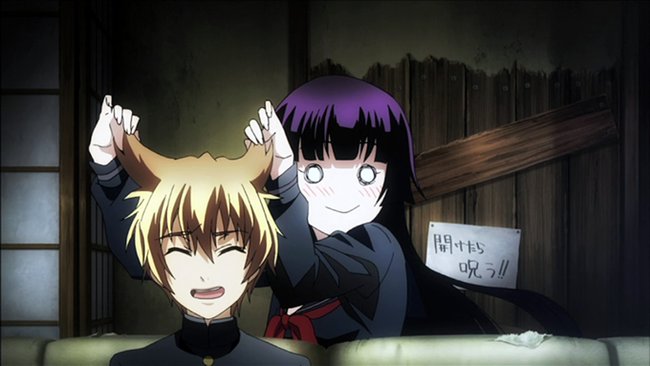 The cutest ghost you never did see

Story
It has been said that a ghost haunts the abandoned building of Seikyou Private Academy, a school so altered over the course of time that it has become a labyrinth. The spirit is said to be evil incarnate, fuelled by the rage of its untimely death, forever bound to its body, tormenting those who draw near…Wrong. Enter Yuko, the supposed spirit of doom that lingers in the school. A bubbly, immature schoolgirl with no memories of her life and who just wants to talk to someone again. Then we meet Teiichi. A young boy with the ability to see Yuko. The two become friends and along with two other students, Momoe and Kirie, form the Paranormal Investigations Club, exploring the ghost stories of the school whilst attempting to recover Yuko’s memories.

So right from the get go, Dusk  Maiden of Amnesia presents one of its most central themes: misinformation. Imagine a game of Chinese WHsipers that lasted six decades. The idea would be so twisted by the end that no-one would know what the original story was. Over the course of time and numerous retellings, the story revolving around “Yuko-san”, a girl who died on school grounds, have been twisted into horror stories, creating the ghost of Seikyou. This leads into another core theme to the series: perception. Ghosts are described as manifestations of one’s own beliefs. Though Yuko does exist in the school, only Teiichi can see her true form because he places no value into the horror stories describing her. Those who believe the stories see what they expect, a monster. Others who deny the stories and do not consciously seek her out, see nothing. 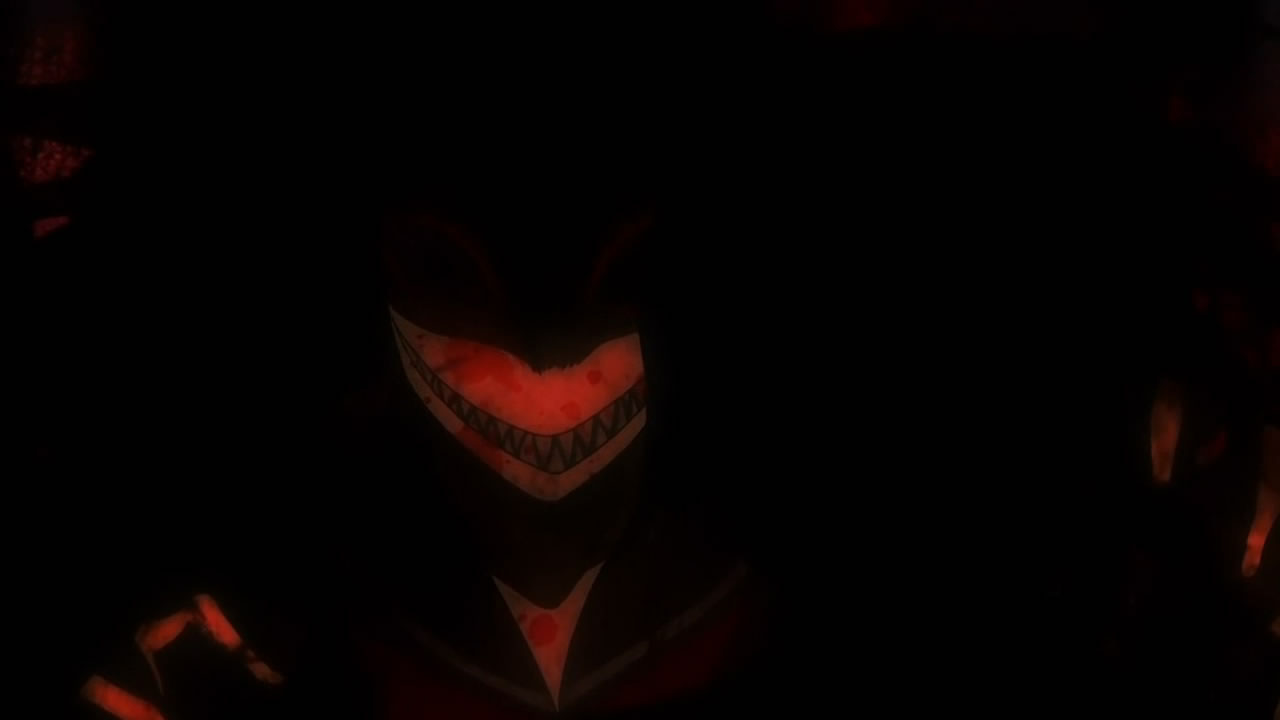 The entire series focuses on the interactions between the four main cast members. As the series progresses, there is quite a lot of development between  the four leads, as their bond strengthens and they come to understand each other. Though at some points I wondered if the school even had other students. Whilst other characters are shown, they are left as shadows. Whilst it may sound a tad lazy, it actually does belong with the story. Being that the protagonists are seemingly the only characters not terrified by the ghost stories that are apparently central to daily school life. Most outsider characters are shown as being insane with fear regarding Yuko, going so far as to hate the name itself, not just the figure.

This focus also lends to the running idea of friendship in the series. In making four people the essential world of the show, it places greater emphasis in what happens in their lives. The series constantly expresses friendship and love through the ideal of perception, finding people that can see the true you and ignore what others believe. Whilst Dusk Maiden does have certain elements of a harem anime, the more subdued nature of the characters relationships adds a certain realism to their interactions. Though there may be a shared love interest, each understands the feelings of the other and doesn’t resort to any wacky schemes to win their affections. 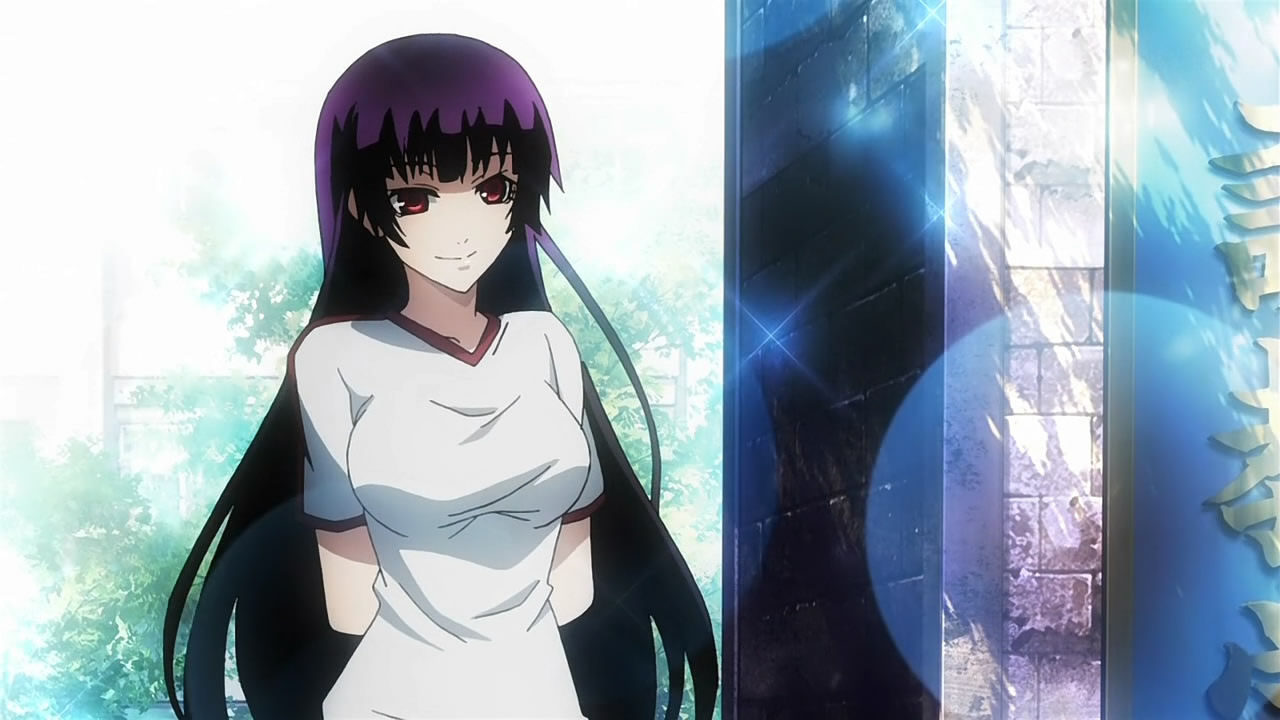 Visuals
Dusk Maiden in general has a fairly subdued tone to its visual. Being that the Paranormal Investigations Club is set up in the abandoned building, the lighting is presented as fairly muted. Most activities of the show take place around dusk or at night, furthering this almost eerie sense of calmness. As the series progresses, light and colour become more prevalent, lending the the moods of the characters. The series also uses reflections fairly regularly during some of the more dramatic dialogue scenes. Characters will appear back to back, each on a different coloured background, or the sky will be mirrored perfectly on the ground. This creates an interesting visual and often relates to the story. Narrowing and blackening pieces of the screen out, is also used to similar effect in both the romantic and horror scenes. Despite being the same effect, its use in contrasting styles of scenes lends power to both, adding feelings of isolation and restriction. Dusk Maiden does a great job a creating a sense of variation in a series that takes place entirely within school grounds, varying colours and contrast to portray unique scenes and a beautiful world. 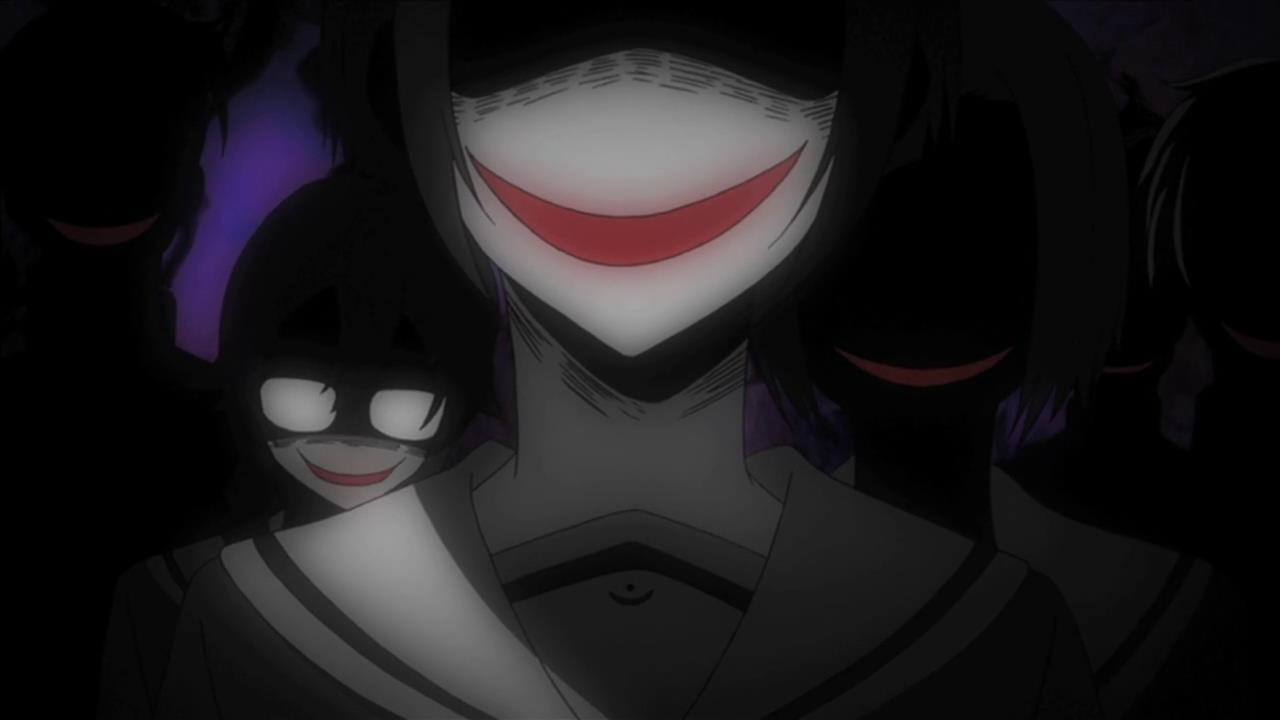 When leaning to the darker side of the series, the tone shifts. Shadows are used heavily, black and blood red dominate the screen and quick cuts are used to induce a sense of panic. Characters appear as shadows with glowing eyes and fanged grins, often growing until they consume the screen. Sentences are occasionally written upon the screen, but not spoken, allowing the audience to create a voice in their head, circling back to the idea of perception. The series will show an area previously depicted as horrifying through the eyes of someone calm headed, revealing that all is not what it seemed.

As looks are also a prevalent theme, the characters themselves are also handled well. Emphasis is often placed on facial expressions and add variation to the small cast. As it has harem elements there is a little fan service, though this isn’t a major focus and is generally overshadowed by the dialogue. Most of the focus is placed on Yuko since, as a ghost, her looks vary between people and is central to her character. 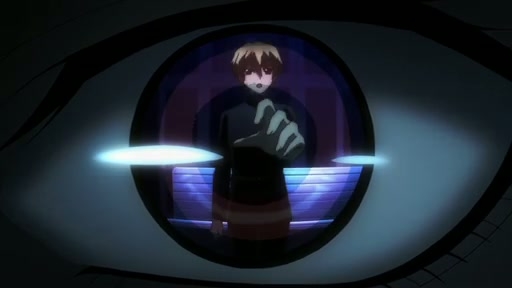 You’ve got a little something in your eye

Audio
The overall sound of Dusk Maiden is haunting in both senses of the word. The soundtrack is used to create an ominous sense when regarding the ghost stories of the series, lending to the creepy vibe given by the visuals. However, the music also gives off a haunting sense of sadness, present throughout the entirety of the series. Though the characters are by no means always depressed, the music often serves as a reminder to the more sombre connection they share.

The voice acting of Dusk Maiden was done well. Though some of the more humourous anime style scenes sometimes came across as a little forced, it was the quieter, more dramatic moments were the voice acting came into its own. The voice actors conveyed the feelings of pain and sadness well, adding depth to the dialogue and characters.

Extras
Dusk Maiden comes with the standard fare of release extras, textless versions of the series opening and ending themes, “Choir Jail” by Konomi Suzuki and “Calendrier” by Aki Okui, as well as trailers for other Hanabee titles. The release also comes with two soundtrack discs, containing the background music from the series along with a piano version of “Choir Jail” and vocal versions of “Calendrier” and “Requiem”. Also included is an OVA episode, labelled simply as episode 13. This episode takes place after the conclusion of the series and possesses a much lighter tone, focusing on the more humourous side of the Paranormal Investigations Club. 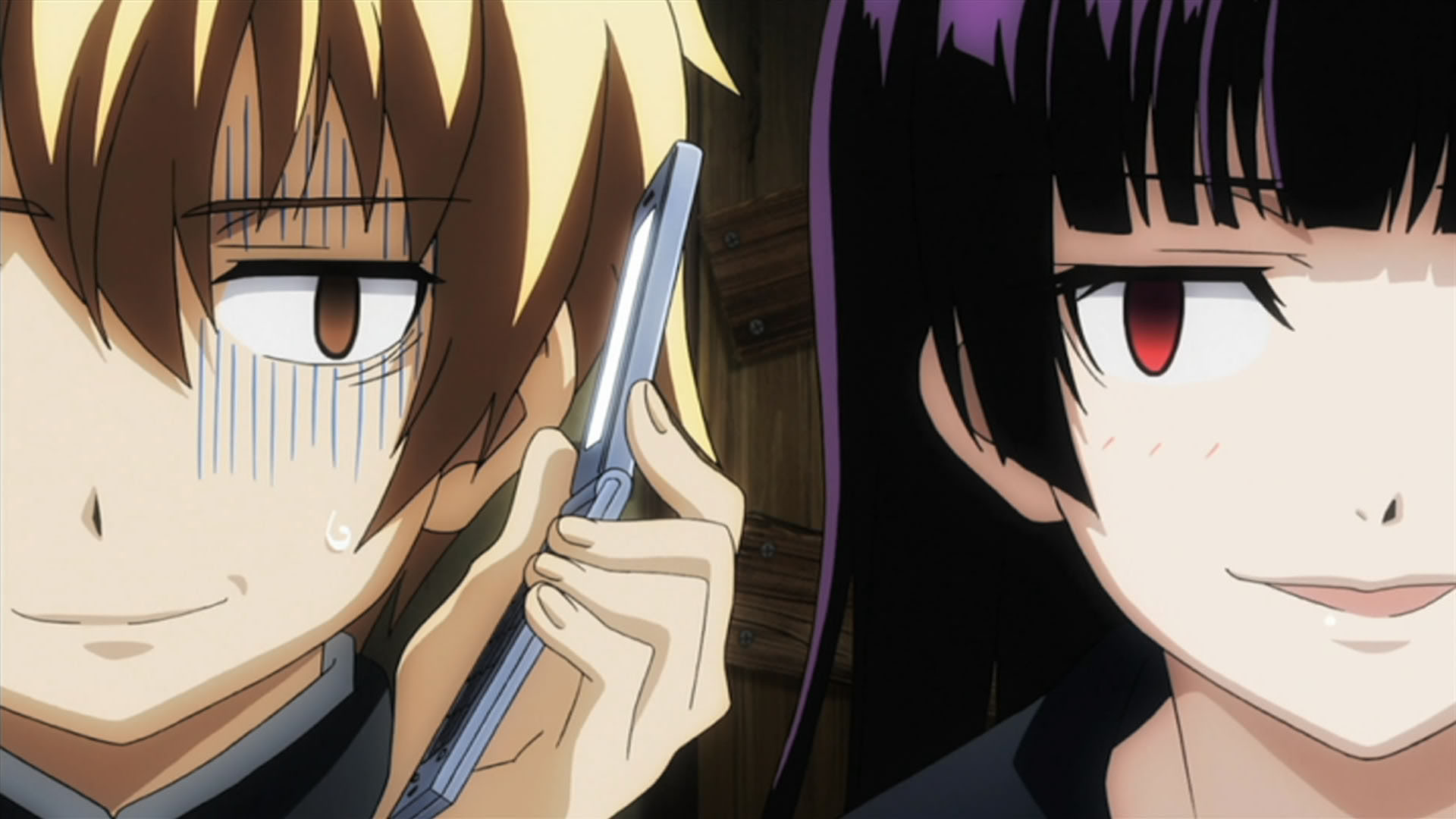 Overall
Dusk Maiden of Amnesia is an interesting series. It’s a tale of friendship, love and accepting people for who they are, not who others say they are. Whilst the anime does have humourous and romantic moments, the audience is always reminded that something bleak looms. Though it does feature classic elements of harem genre anime, Dusk Maiden handles them in a way that it doesn’t seem over the top or misplaced. The series comes into its own when it begins to explore Yuko’s past and creates some truly emotional sequences that will warm and break your heart.