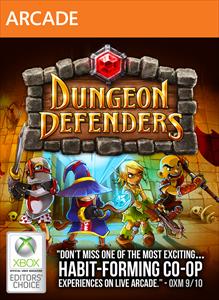 Overview
When I first looked at Dungeon Defenders, I fell in love with the concept of an action role playing game mixed with tower defense. Being excited would be a drastic understatement. Like most gamers feel about new games like Gears of War 3 and the upcoming Modern Warfare, Dungeon Defenders patches my gaming void. I’ll dish out all the information you need to know about this game going forward.

Story
The old heroes of Etheria departed their stronghold leaving the younger generation to maintain the castle chores. Soon after the apprentices were messing around – as young children do – and broke one of the castle’s Eternia Crystals. The crystals contained the an evil essence of the “old ones”. Knowing that they had made a dire mistake, the pupils vowed to defeat any foe that breached the castle gates. Only together will the Squire, Apprentice, Huntress, and Monk protect their home from the ancient evil.

Gameplay
Like any learning experience, Dungeon Defenders allows the player to undertake a tutorial before delving head first into a lava pit. Unless you would prefer to skip the tutorial, this is a great way to learn the game’s mechanics. The tutorial starts in the first level of the campaign and explains different phases, upgrades, inventory, and player stats.

Build Phase is an allotted time period that the player can utilize to build up defenses. The initial build phase generates treasure chests about the map. The chests contain mana gems that are the essential building blocks for your defense structures. Every structure has a different price as well as unit cost. For instance the Squire may conjure a spike blockade if he has 30 mana. He may continually set up spike blockades until either his mana runs out or the unit limit has been reached.

Once you are comfortable with your defensive setup you can activate the Eternia Crystal to begin the Combat Phase. Whether you are a melee or ranged fighter, it is important to upgrade and support your defenses. Whether by projectile or blade, fighting against the horde yourself can prove efficient as well as rewarding. Each foe will drop essential mana gems that can help you build additional defenses or upgrade your existing ones. Successfully defeating the wave of enemies brings you back into Build Phase where you can repair damaged defenses or build on to your arsenal. 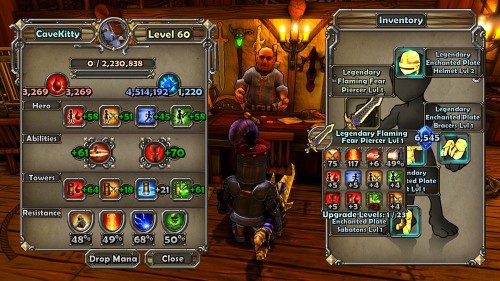 Being able to choose and customize your character is a necessity in any RPG, and Dungeon Defenders incorporates an unique leveling system that can directly affect bonuses to your defense structures. After earning enough experience from your defenses and personal killing sprees, you are able to increase your rank in several categories. Hero attributes like health, base attack damage, speed, and casting rate can be increased by spending attribute points. Similarly, you may spend these points increasing your defenses such as health, base attack damage, attack rate, and area of effect. You are limited to how many points you can spend per level, thus personalizing your character’s build.

Increasing stats is neat, but not as cool as upgrading pets, weapons, and armor. After each battle you are able to store mana in your personal bank at the tavern. Once back at the tavern you can purchase new items as well as access the items you picked up during your battles. To upgrade any item, simply select the item in your inventory and press down the (Right Trigger). The allocated mana in the bank will be used to upgrade any item, and then you are able to choose which attribute of the item to increase – customization at its finest. 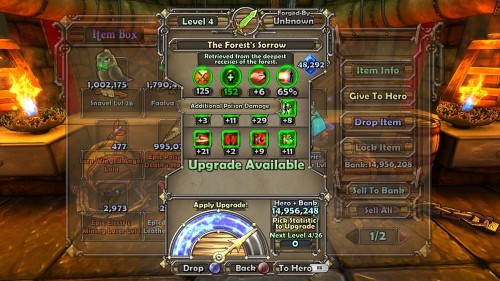 One of most interesting characteristics about the game is being able to swap between heroes on the fly. For instance you have being working on your Squire, and your weapon has lightning enhancement. For some “unknown” reason, most of your enemies have lightning resistance. During your build phase you could switch to your Apprentice character and create magic blockades that remove magic resistance. Then you could swap back to your Squire and brutally murder your foes. And that is only a sample of possibilities.

Each character has their own unique set of traps, blockades, and towers that can be advantageous to incorporate in a defense. The Monk’s defenses focus primarily on delays and bonuses. Starting off, the Monk has an ensnare aura that slows enemies movement as well as attack speed. Since there is no physical obstruction, enemies will still be able to move through the aura towards the Eternia Crystals. Thus, swapping character’s early on in the game is very beneficial to add additional physical defenses. Perhaps switching to the squire and adding a spike blockade would add to the aura’s efficiency. By gaining levels, characters will learn new defenses that will help protect the Eternia Crystals from the largest hordes. 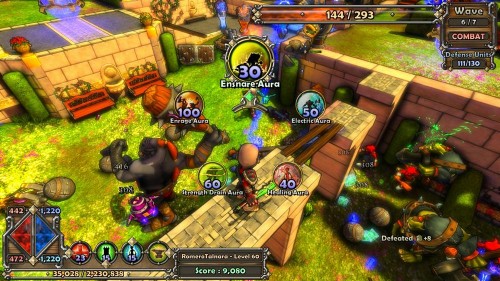 Boss battles are tough even on Easy difficulty. Not being careful with defense placements can surely cause you to restart in a moment’s notice. The dragon boss is by far the most difficult to defeat. By shooting large ballistae around the castle, you can reduce the life of the dragon. After shooting him, the dragon will appear in one of three platforms on the ramparts stage. Its fire breathing causes massive amounts of damage and can kill characters very quickly. The dragon will stay on the given platform for a short duration, so attack when it is not breathing fire. The major problem with this dragon is that it likes to attack your defenses while airborne. Therefore, there is a sense of urgency of hitting the dragon while it is in flight. 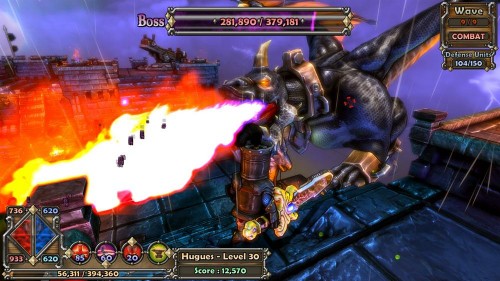 Once you have completed the campaign on Easy or Medium difficulty, you are far from completing the game. After completing the campaign on my first run, I have only unlocked one achievement. Dungeon Defenders is a game that continually becomes more intense as you play through all of its modes. In addition to the original campaign you are able to play through challenges that will test your dungeon defending skills to the max. One challenge in particular continually shifts the Eternia Crystal after each Combat Phase. That means you may have to sell your current defenses and replace them accordingly.

Upon level selection you can also choose to play survival or pure strategy modes. Survival tests your abilities to protect the Eternia Crystal from an increasingly difficult horde. You will need to muster all of your abilities to make it to wave 15 where you may find a nice achievement. On the other hand pure strategy tests your ability of defense placement. In this mode you cannot attack with your character. This is all about improving defenses and surviving the wave of enemy forces. Pray to whatever god that an ogre doesn’t break through. Then it’s game over.

Of course we cannot forget to mention Dungeon Defender’s online multiplayer. You can create a quick game or join a custom match already in progress. The option for a private match is also available if you only want to invite friends. The single annoyance that I have with the multiplayer is the waiting period for searching custom matches. The searching queue will restart if you fail to join a custom game as well. A minor annoyance that soon dissipates as soon as you join the battle.

You will certainly meet an array of players online. While some players will help fortify your defenses, others will simply sell yours off to place their defenses instead. The best way to deal with these uncertainties is to grab a headset and talk to your teammates. At the very least they should be able to hear you talk. At the end of the battle players get excited to see their overall standing in the leaderboards, so the competitive nature is relevant. 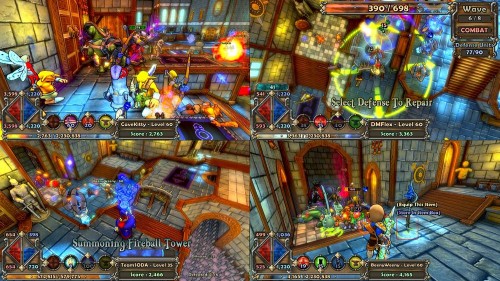 The option of playing locally provides friends that don’t have the game or Xbox a hands-on experience of a great game. Local co-op can have its advantages as far as pre-planned strategies and knowing character builds. One character could focus on attack damage while the other focuses on health. The only negative aspect I could think of local play is having a split screen (not a huge problem if you have a big TV).

Graphics/Audio
The visuals in Dungeon Defenders are simply amazing. After providing a great core of game mechanics, the developers did their best to deliver a similar artistic experience. The environments are visually appealing and potentially dangerous. Some games provide assets like mountainsides and lava pits, but do not incorporate effects that resemble realism. However, in this game you may certainly die if you touch lava or fall onto spikes.

Minor graphics give Dungeon Defenders a lasting flavor as well. Adding into the aspect of customization, players can change the color of their hero’s clothing as well as the color of the Eternia Crystals. The variety of weapons are even distinguishable by elemental enhancements as well as size and shape. You know it is a fun game when you can carry a really big weapon! 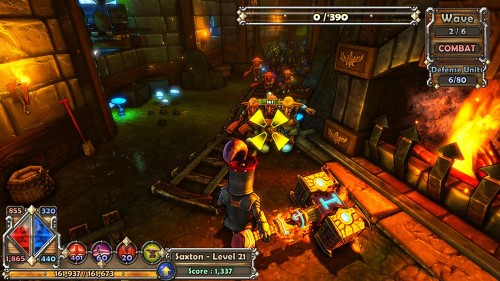 Every seems to be unique in Dungeon Defenders including the audio. Pets are given sound effects, and trust me some of the sounds they make are weird. But weird works! Whether you are collecting mana or summoning new defenses, there is a sound for it. Dungeon Defenders feels complete with every kobold explosion and goblin death.

Overall
Being one of the best Xbox Live Arcade games that I have ever played, Dungeon Defenders should be a contender for best downloadable game this year. There is so much that a player can do in this game. The multiplayer is very functional and has a readily available community. Elite gamers will play the game until they can defeat every level on Insane difficulty and rank up on the leaderboards.

I highly recommend any RPG fan to try this game out. Highly customizable gameplay alongside challenging modes makes Dungeon Defenders a classy tower defense RPG. You would normally pay $60 for a full game, and at 1200 Microsoft points this game is a steal!