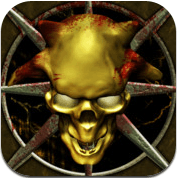 Overview
Doomsday III was developed using the source code of Doom Classic (or the id Tech 1 engine) and is the product of the the community project Freedom.  In the description of the game on the App Store, General Arcade states that “All our work will be contributed back to the community.”

So, although it is not a straight port of the classic shooter, Doomsday III: Base Ganymede is obviously very closely related to the series.  However, Doom was made to be played on the PC.  Can this game overcome the limitations of iOS devices and deliver a quality experience? 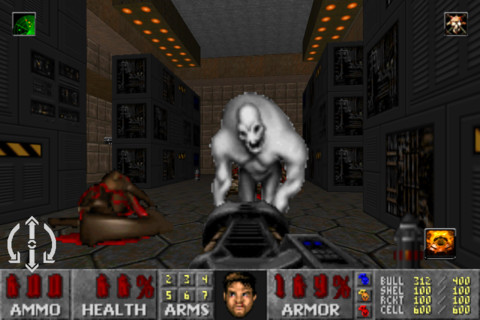 Gameplay
Really, there has never been much to the story in Doom games, so I think its best to skip it in this review.  Suffice it to say, there was a base that got attacked and this soldier dude has to fight off strange alien creatures.  End of plot.

Funny as it may seem, that basically sums up the gameplay too. Playing as the soldier mentioned above, you will explore a variety of locales and fight off increasingly crazy and creepy enemies. As is standard in Doom games, you will start off with a simple pistol. However, there are numerous weapons to be found in the game. Within about 5 minutes I had found a shotgun and I was blowing up giant worms like a maniac. In total, there are 9 weapons to be found in Doomsday III, each more fun than the last.

One featureI really appreciated was that I did not have to unlock any levels. I could jump into any one whenever I felt like it. This really helped me not get bored with the game, because if I could not get past a level, I could just go right into a new one and start playing that one. 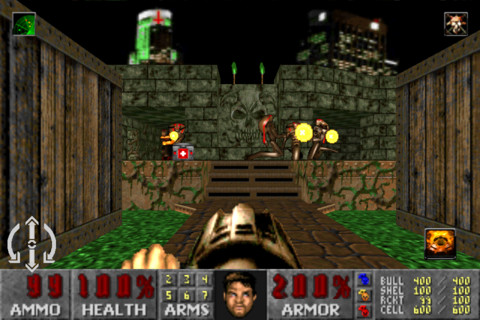 One reason why Doom is popular is that it is known to be a difficult game. And that part of the gameplay has certainly transitioned into this game. There are a plethora of bad guys to fight and the enemy variety is nothing short of amazing. I was shocked that my phone never slowed down while I was playing the game, as there were literally about 10+ enemies at a time on the screen in almost every area.

Nevertheless, this difficulty also presents problems. Being based on an accurate control system, Doom has problems when it is transported to a touch control system. While touch controls can be accurate and provide a good experience for many games, shooters seem to suffer on the platform. General Arcade attempted to solve this by offering customization options: it is possible to move the buttons anywhere you want on the screen. In addition, they offered 3-4 different control button combinations. Try hard as they might though, Doomsday III still is extremely frustrating to control when using the plain touch controls. It felt like I was always having to fight the controls, or that I was dying simply because my reticule was wildly meandering across the screen. It should be noted that Doomsday III also includes support for the 60beat GamePad and the Fling, but I was unable to test them out, so the game may be better if it is played with one of these accessories. 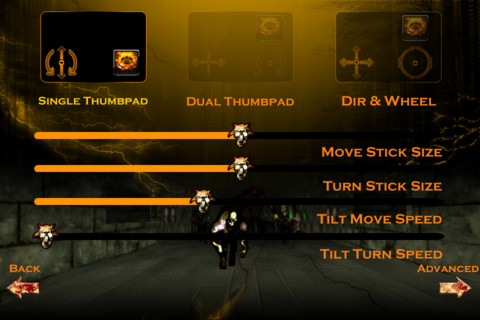 Audio and Visuals
Doomsday III: Base Ganymede gives the user the option to download 11 additional soundtracks. However, these take up quite a bit of space, and I would say that the standard soundtrack already present in Doomsday is more than enough to complement the gameplay. Nevertheless, the additional music is quite good, and if you can spare the memory, it may be worth it, especially if you are a hardcore Doom fan.

This game certainly is not the prettiest iOS game out there, but it is reasonably well rendered. Being based off the orignal game, it should come as no surprise that the graphics are a little on the rough side, with lots of blockiness being present. Nonetheless, it certainly looks almost exactly like DOOM and that ought to bring back a lot of memories for most folks. Plus, watching blocky blood effects spatter from dead aliens is always fun. 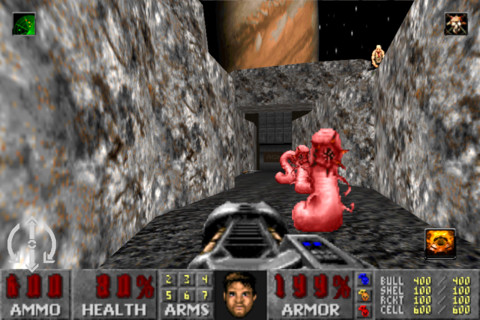 Overall
In conclusion, if you are an addict of Doom and just can’t enough of it, I wholeheartedly recommend Doomsday III: Base Ganymede. Being able to play through 29 levels while you are on route to somewhere is satsifying in the most immense way. Nevertheless, the inaccuracy of the controls is annoying, and I was shocked that General Arcade did not include any multiplayer options. All in all, I would say that for $0.99, you are getting your moneys worth though.