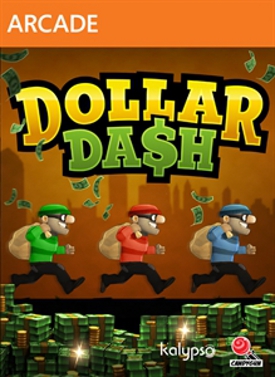 Overview
Back before online multiplayer brought players from across the world together against each other, all players could could do was play against bots or try to round up 1-3 friends to throw down.  Games like Bomberman 64 didn’t worry about screen-looking as all the players are all already looking at the same top-down arena.  Dollar Dash is the kind of game that hopes to bring back those fond memories and hope to improve on them as well.

Story
The story of Dollar Dash exists in the vaguest of senses.  Players control their little thief as he robs a variety of locations and the other thieves that are hoping to do the same.  Other gametypes have the thieves only contesting against eachother, but throughout all the games players are awarded cash that ranks up their personal little thief, which can also be spent on upgrades, perks, and cosmetics.  What’s better than a pinstripes shirt thief?  A pinstripes shirt thief with a cowboy hat and a big, bushy beard!  In the end though, there is no story just a cartoonish criminal avatar.  But, that’s fine too. 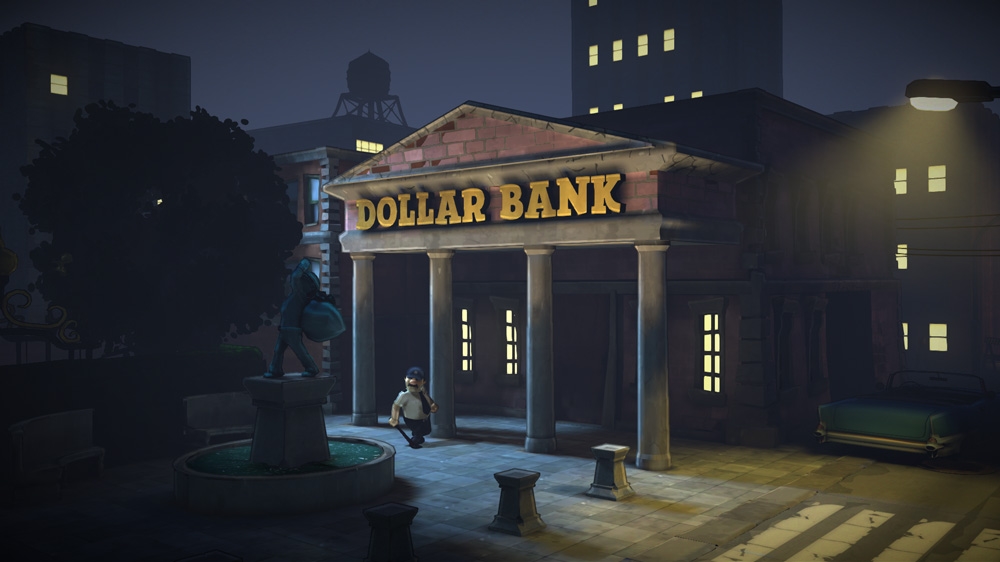 Gameplay
As stated before the bulk of the gameplay falls into the gametypes, which is condensed down to the most basic three Dollar Dash, Hit ‘n’ Run, and Save the Safe.  The most complicated, which isn’t really, of these gametypes is the Dollar Dash, as it is the most noncompetitive.  The goal is just to gather money from the ground and drop it off, it isn’t completely noncompetitive though as players can steal money from each other and the more money a player has in their bag the slower they go, providing a healthy balance.  The tutorial for the game itself introduces the concepts of the premier gametype wonderfully.  Short, simple, and to the point, after the tutorial explains the basic controls all players have left is the items.

If items were opulence, this game has it in nines.  With three different item slots, for offensive, defensive, and buff, players have a huge selection of items to use to help themselves and hurt everyone else.  Snowballs, fireworks, giant boulders, just to name a few the items fit the cartoony style perfectly and are simple enough to understand at a glance the first time they are picked up, no need for a lesson or tutorial for each one.  Plus, each game can be customized with specific items turned on or off to fit any preference. 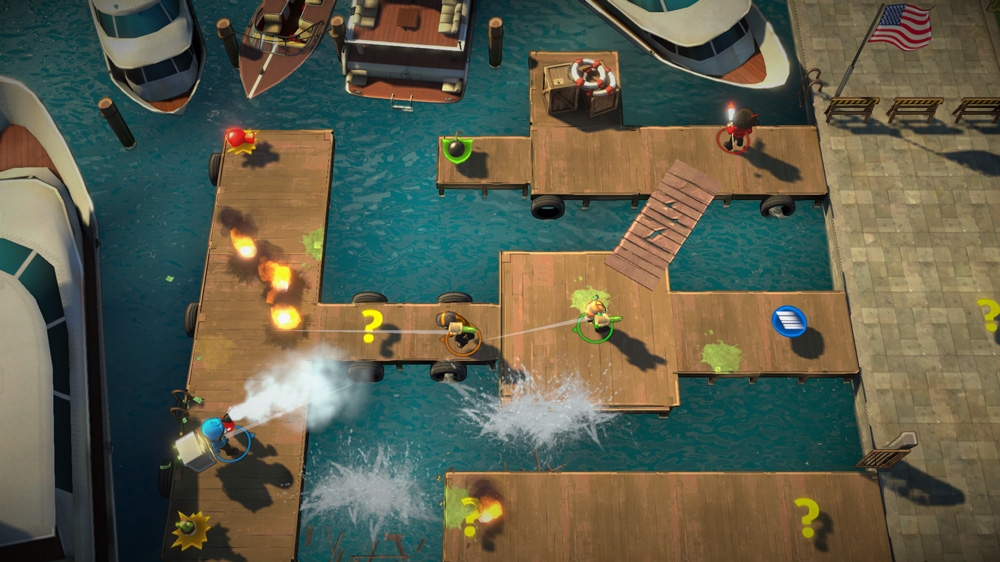 Unlike the Dollar Dash gametype, the other two gametypes, Hit ‘n’ Run and Save the Safe, are directly competitive.  To win players must directly combat each other.  Hit ‘n’ Run sees plays in an all out brawl where landing knockouts grants a cash reward with whoever hitting the target first being the winner.  While Save the Safe is a mad game of holding the safe to score cash, while avoiding the attacks of the other players.  These gametypes require players to really know what they, and everyone else, are doing watching out for what other players have on them and what items are available to pick off the ground.

Where the games take place is a wide variety of maps that range from private gardens, city streets, to interior and exteriors of buildings.  There are plenty of maps to play on with 9-11 maps for each mode giving lots of options.  Maps also have preset items, but these of course can still be changed to preference no matter what.  This selection allows it maintain a sense of freshness for a good span of gameplay, but players will still find some favorites out of the bunch. 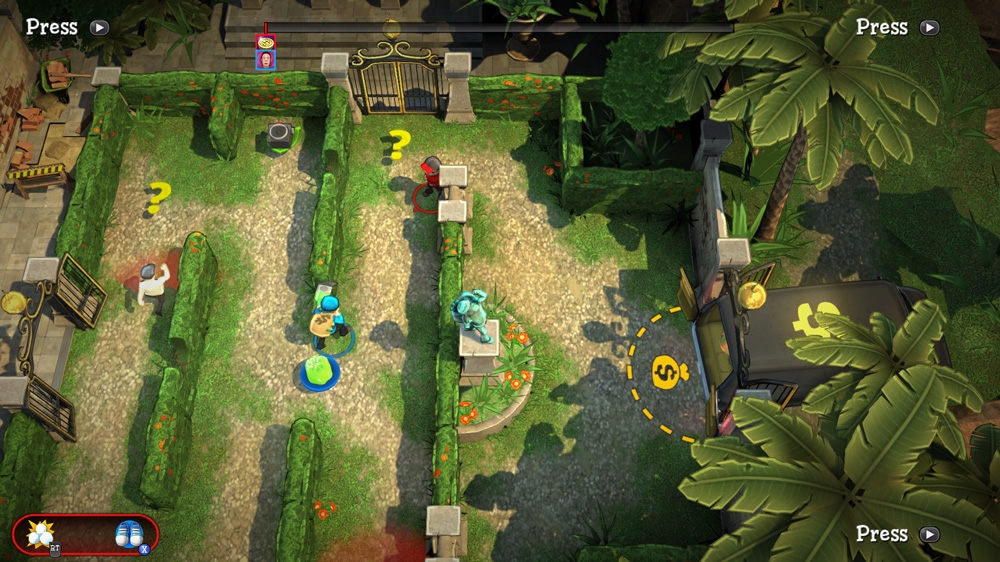 All of the gametypes see 2-4 of these little thieves as they try to get enough money to win. The game includes bots, for those who hate people or lack a connection to Xbox Live Gold, which is great to see in a game like this where bots made their biggest impression.  Players can have up to four players on their box however, so with enough friends, and controllers, they don’t even need to worry about bots or a connection.  Really, the ability to have 4 person local is probably the best thing about this game.  This makes it a fun and easy party game that lets plenty of people engage in at once.

Visuals and Audio
The game’s cartoonish looks and antics fit the premise and feel, which are even further accentuated by the music and sound effects.  This is what a current gen cartoonish game should look like, as even in-game the characters and items hold up even on a higher definition television, which is probably thanks to using the Unreal Engine.  The ridiculous get-ups and the whistle of items as they fling through the air towards opponents provide a silly over the top view of the world within Dollar Dash.  Given enough time playing the game players shouldn’t have any problem making a character look exactly as goofy and they want. 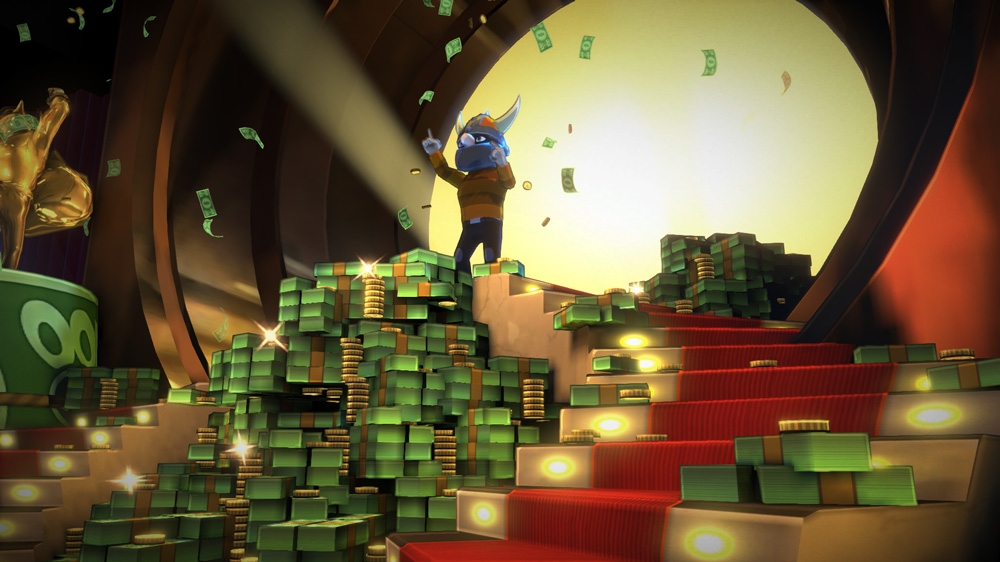 Overall
Dollar Dash is about everything anyone could ask for in a multiplayer game like this.  Four-person local, as well as, online means that players don’t need to worry about having to get people together to play, or the reverse of having to find a match over the internet.  Even the bots provide for a decent playing experience.  The older crowd can enjoy this for the memories and the younger ones can enjoy to make some for themselves.  While the upgrades and perks players can unlock are a little over the top, their inclusion doesn’t hamper the experience either.  Players looking for a party play kind of game may find it here.