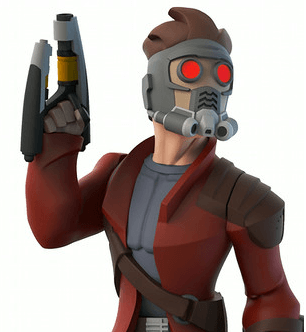 The Disney Infinity 2.0 Marvel Super Heroes Starter Pack and Play Sets come with all that you need to enjoy the game, but they don’t quite come with everything you might want. A big part of the Disney Infinity experience is collecting and playing with all of the other characters that are on offer. This time around we have a smorgasboard of super heroes to slam down onto our Infinity Base and run through the game’s various Play Sets and Toy Box mode. So lets take a closer look at the first wave figures that don’t come included in a pack: 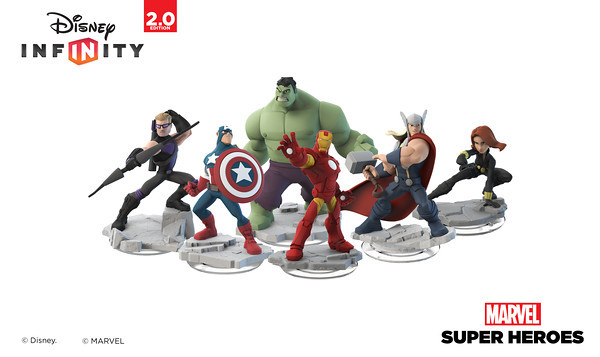 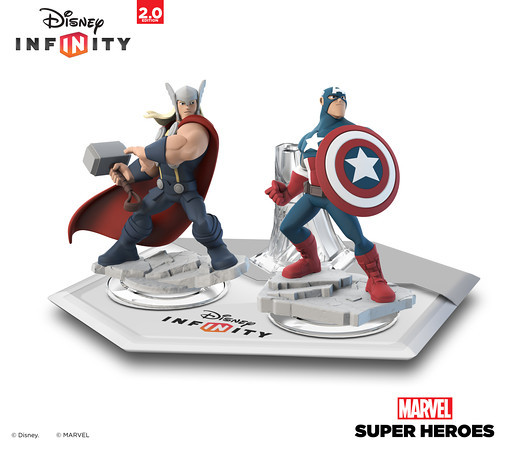 The first Avenger himself, Captain America AKA Steve Rodgers is a super soldier from a bygone era. Taveling through time and into Disney Infinity, Ole’ Cap brings with him his mighty shield, and when he throws it all who face his shield must yield… Yeah ok so many people out there wont recognise the old Captain America theme song. Regardless, Captain America is the epitome of an average character in the world of Disney Infinity 2.0. Where you have heroes who can fly, climb buildings or smash entire armies with a single punch, Captain America sits back, throwing his shield and punching evil in the face. Sadly his greatest strength – his ability to lead and inspire, doesn’t translate well into a video game so Rodgers is stuck throwing his shield around and using his bare fists in combat. Don’t get me wrong, there isn’t anything wrong with Cap, but just as a character in the game he is a little outclassed. 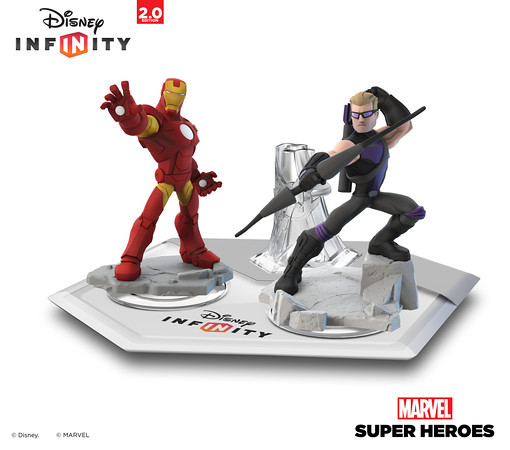 The first of the game’s archers (Merida from Brave will be joining the roster at a later date), Hawkeye is currently unique among all the characters. His bow is his primary weapon and he uses it to great effectiveness on the battlefield. Hawkeye is able to shoot enemies from far away… and also from not-so far away. He is a bit of a one-note character but still incredibly fun to play. Lining up a shot with your bow is even more exciting after you have upgraded it a few times to give it that extra stopping power. Also, his low-key attire really helps him stand out from the brightly coloured team-mates. 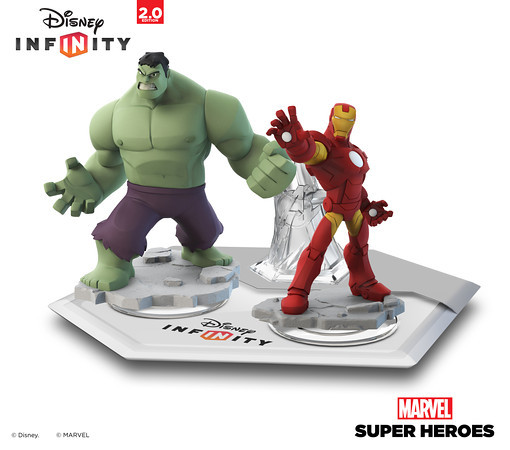 Ok I will start with this – I don’t like the colour of green that they chose for the Hulk’s figure. It is a little pale and drab and lacks the pizzazz that I’ve come to expect from the green giant (admittedly, he looks a lot better in-game). Also his facial expression on the figure looks like he is biting his bottom lip so it is a little hard to take him seriously. Ok, that negativity aside: The Hulk is awesome. He is EXACTLY the powerhouse you would expect him to be, and he can plow through entire hordes of enemies with no hassle at all. Once you start progressing along his skill tree and give him the wall-crawl ability and some extra strength in his punches, he becomes nigh unstoppable. Hulk is also playable in the Spider-Man Play Set after finding all of his Crossover Coins (which conveniently enough are all placed right near each other). To summarise the way the Hulks plays is to say heThe way Hulk plays is very reminiscent of The Incredible Hulk: Ultimate Destruction, and frankly that is just incredible. 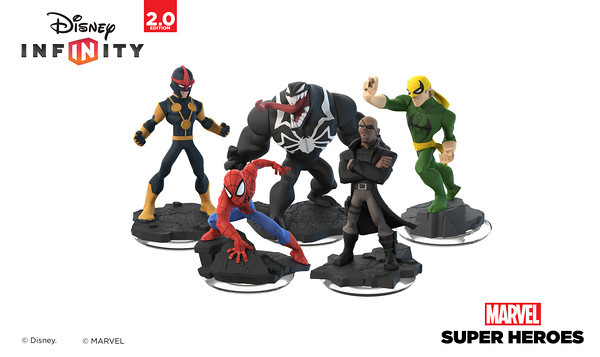 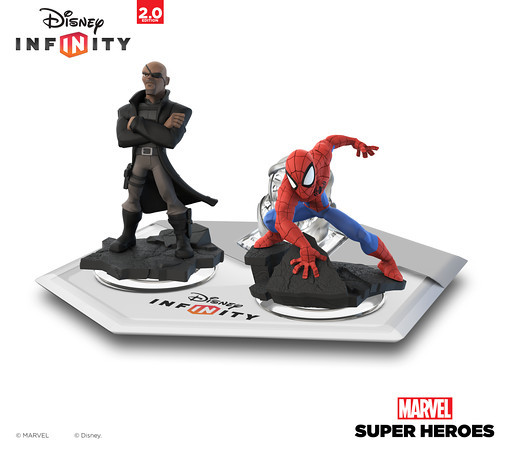 The man himself, the director of S.H.I.E.L.D. is in the house and he is voiced by none other than Samuel L. Jackson. Getting a movie star to reprise their role on a video game is rare enough, but to have it be such a well known name is even rarer. Jackson doesn’t phone in this performance either, giving his all to the character like he was reading the script for Avengers 3. Nick Fury plays a lot like Black Widow from the Starter Set, equipped with dual blasters and the ability to cloak and summon a Life Model Decoy to distract his enemies. He does everything a super spy outta, and does it with class. Although it is a little disappointing that he is not playable in the Avengers Play Set, but I guess you can’t have it all. 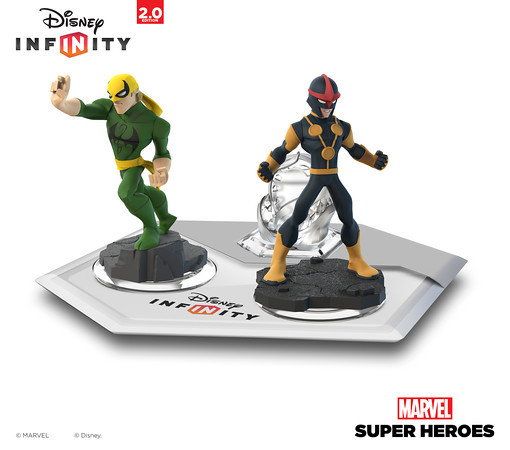 Easily the most obscure character included in the game, Iron Fist’s appearance and voice come from the Ultimate Spider-Man animated series. A master of kung-fu, and a man who beat a dragon with his own two hands, Iron Fist brings his incredible fighting skill to Disney Infinity 2.0. Another one of those average characters, like Captain America, it is nevertheless cool to see Avalanche and Disney utilising some more unknown characters in the Marvel library (although his inclusion could be to hype up the upcoming Iron Fist show on Netflix). 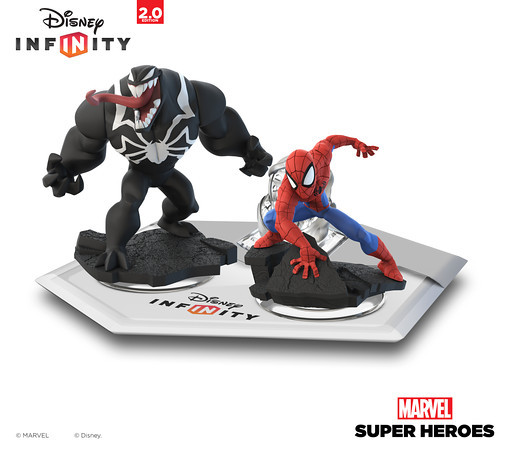 Possibly one of the most well-known villains in all of nerddom, Venom is the antithesis of Spider-Man, and his black suit, long tongue and muscular build have become a trademark and he wears them all with pride in Disney Infinity 2.0. Venom is very much a cross between Spider-Man and The Hulk, with the abilities of the former mixed with the strength of the latter. I think its fair to say that Venom is the strongest character out of the first-wave line-up and may be the strongest character out of the entire Disney Infinity universe.

Guardians of the Galaxy Figures 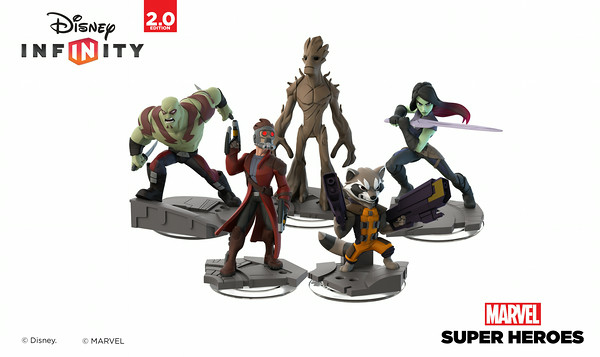 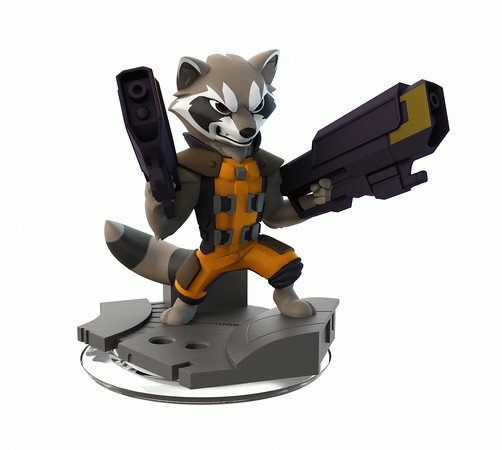 “Ohhh yeahhhhh.” Since earlier this year, Roccet Raccoon has become a household name. The wise-cracking, gun-toting half animal/half robot maniac has warmed the hearts of people all over the world, and now you get to play as him! In-game, Rocket plays very similar to Star-Lord, utilising his dual blasters to inflict as much damage as possible on the waves of enemies attacking Knowhere (or your Toy Box, whichever you choose). However, he can charge up his weapons and unleash explosive blasts that take out enemies in a wide area. Not only that, but he is able to ride on the shoulder of Groot, and fire from there much like he does in the movie. His physical appearance is a bit of a mixture of his movie and comic book iterations, creating a clook that is unique to the game.

If there is someone from Guardians of the Galaxy more well known than Roccet Raccoon, it is Groot. The living tree that can only speak three words brings his considerable bulk and power to the game, able to punch enemies from afar and climb up walls, Groot can do it all! While not quite as strong as the Hulk or Venom, he is up there in terms of power level (keeping true to his comic book characterisation). Groot’s appearance this time round is more akin to his movie look than his comic book one, probably to not confuse people who have never heard of the admittedly obscure comic series. 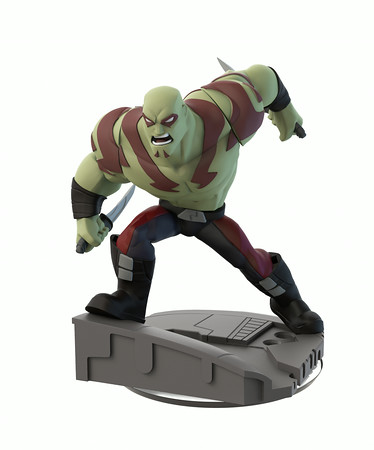 Drax the Destroyer. What more can really be said. Strong and fast, Drax is the ultimate fighter. Weilding his twin blades, he charges into battle like a madman (cause well… he IS a madman). The designers opted give Drax his comic book look rather than his film one, probably because the amount of detail that his tattooing had in the film would be impossible to replicate on a figure this size. Although having Star-Lord, Groot and Roccet resemble their film counterparts while Drax and Gamora look more like the comic book iterations creates a bit of a discrepency with the team, and one that die-hard comic book fans wont be able to overlook.

So there we have it. Disney Infinity 2.0 Wave 1 has 9 stand-alone figures and while many of them are absolute home-runs, some are misses that fumble at the start. Some characters just don’t translate very well into a video game, and some are just outclassed by those around them. However, Marvel and Disney have done an excellent job bringing these characters to life, and all of them have had their skills and abilities lifted straight from the comic books and into the game, and that alone is enough of a reason to celebrate.

If looking at the individual figures isn’t enough for you, we also have reviews of the Disney Infinity 2.0: Marvel Super Heroes Starter Set, as well as the Spider-Man and Guardians of the Galaxy Play Sets.