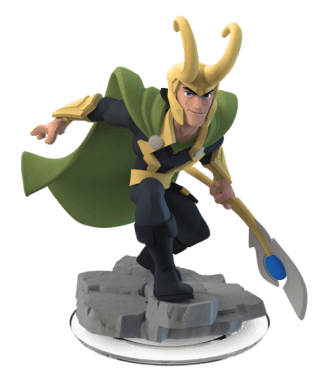 Loki is probably one of the most highly anticipated characters in the entire game. The Disney Infinity version of Loki is inspired quite heavily by his film counterpart. The character looks like somebody paused a scene of The Avengers, traced around Tom Hiddleston’s Loki and then added some of that Disney Infinity flair. The God of Mischief comes equipped with his Asgardian battle armor, his mighty scepter and of course the Tesseract Infinity Stone. 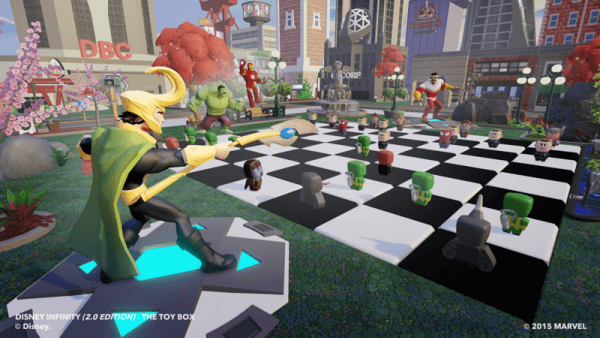 Loki plays quite differently to just about every other character in the Infinity line-up-, relying on cunning and tactics instead of brute strength. His special ability allows him to turn invisible AND create a clone doppelganger. You know the scene in Avengers where Thor tries to tackle Loki, only to discover it is a projection? Well now you get to relive that same moment with your friends in the Toy Box. As you level up his skills, Loki’s projections become capable of attacking opposing enemies and when they are finished, will explode in a spectacular, brightly coloured fashion.

Loki has the ability to fight hand to hand, but as you would expect, is more adept at sending blasts of energy out of his Scepter – the one gifted to him by Thanos himself. Like all other projectile wielding characters, you can charge up Loki’s scepter to unleash a blast of energy that can decimate even the strongest of Toy Box enemies. 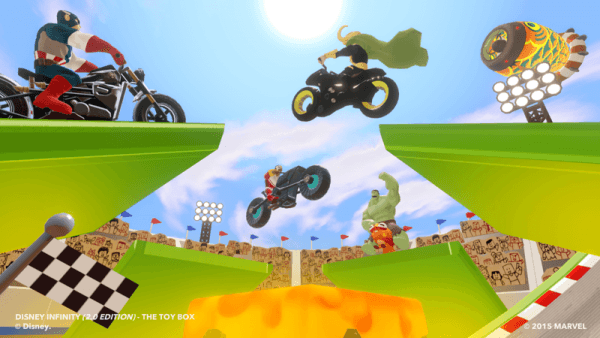 Loki can also fly… sort of. While many characters in Disney Infinity 2.0 have the ability to duck and weave through buildings at super fast speeds (like Falcon), Loki can instead use the power of the Tesseract to float in mid-air. While it isn’t the most useful of abilities, and seems like a large step-down from the other flying characters, the float ability just fits Loki’s arrogant personality perfectly – it isn’t hard to imagine him floating among a group of people, having them cower in fear at his fear.

The Loki figure is quite nice, and is intricately detailed due to his Asgardian Armor. The God of Mischief is painted in a green/gold/black colour scheme that really captures the look and feel of the character perfectly. He is hunched over in a pose that makes it look like he is ready to pounce, his cape billowing behind him and his scepter is gripped tightly in his hand. While the figure looks great, I am a little worried that all of the thin, plastic pieces like the scepter, the horns on his helmet and his care will be fragile and risk breaking if played with too roughly. 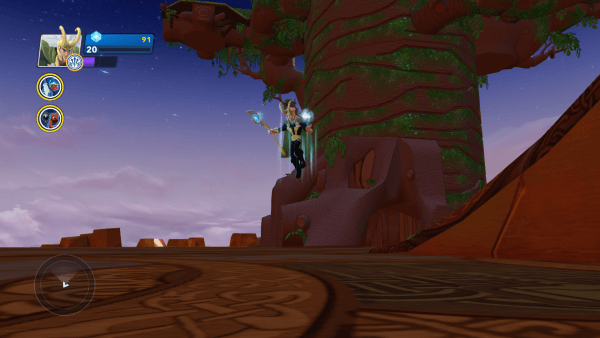 It seems fitting that Disney Infinity 2.0 would wrap up with two final additions to the Avengers Play Set, and both Falcon and Loki are incredible figures that add a lot to not only the Play Set, but the Toy Box too. Also, now that all of the figures are released, eager collectors are able to unlock a special Star Wars themed item from the Hall of Super Heroes (but I wont tell you what it is

you’ll have to go find out on your own).