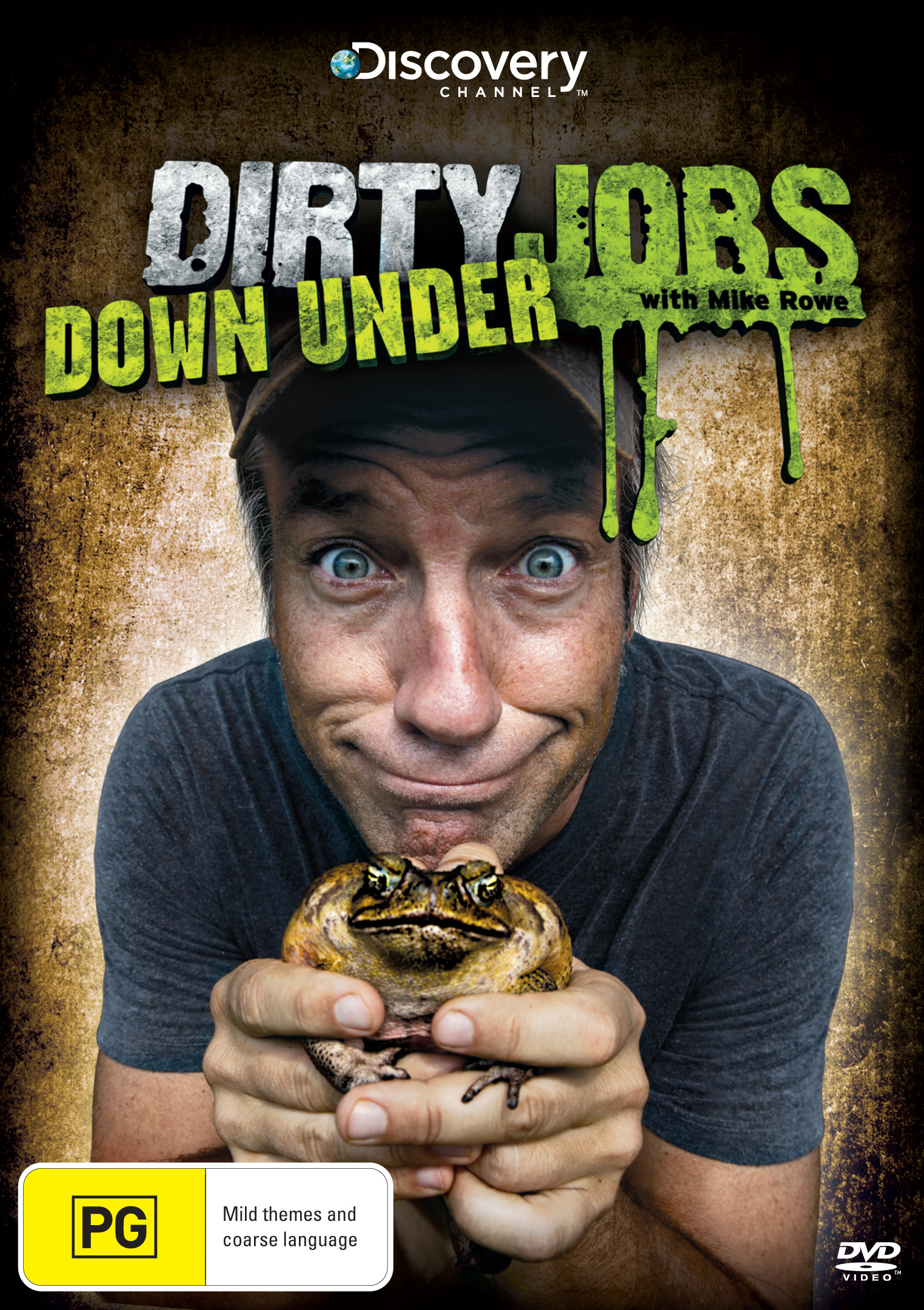 Overview
It’s only natural to complain about your job. That being said, some people have a better claim than others. From capturing deadly snakes in the city of Adelaide to mining for precious opals in the hot and fly ridden Coober Pedy, work can be tough. Something Mike Rowe learns as he searches for Dirty Jobs Down Under. 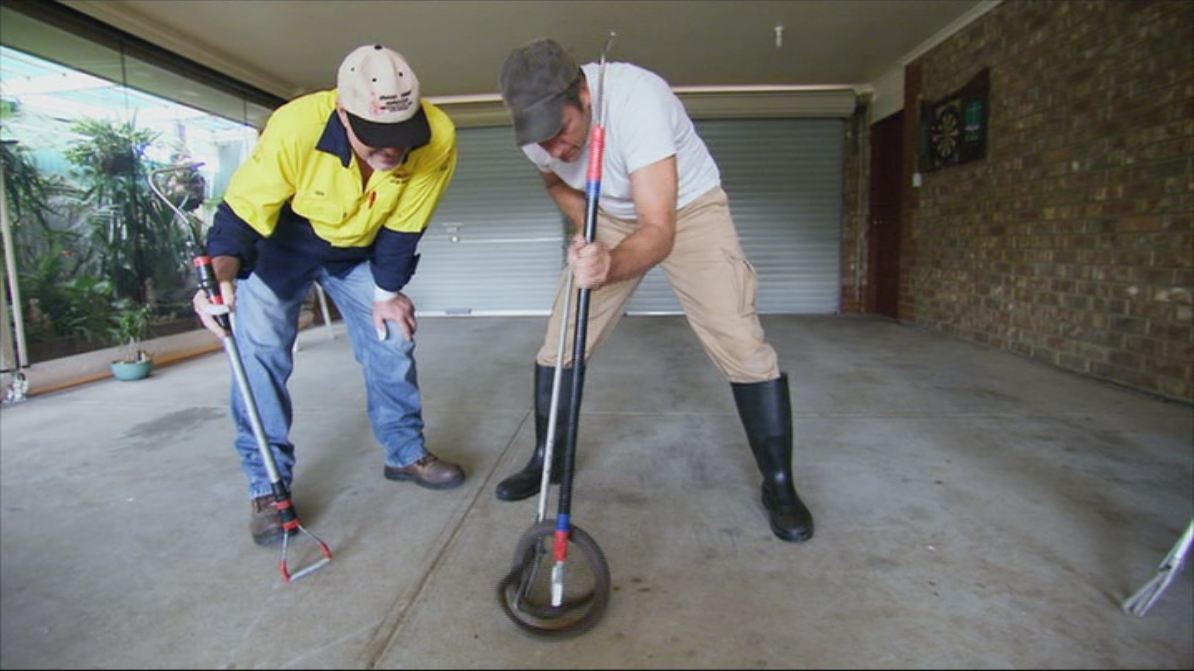 The trick is to not get bitten

Story
This is a show about jobs. Not jobs that people think about mind you, but ones that are important regardless…also dirty. In this season, Mike Rowe ventures down under and checks out the strange and colourful vocations that Australia has to offer. As with the rest of the show, Mike Rowe takes part in the action, learning how to perform these various jobs and living the life of these unique workers. For a short period of time at least. Though each job undertaken is by no means common in Australia, they do not exist at all in the United States. As a result, the show spends a majority of its time in stereotypically Australian places, such as crocodile infested creeks and areas of ridiculous heat.

Venturing to the city of Adelaide, Mike and crew experience a day in the life of a snake catcher. Being the naturally safe habitat that Australia is, these slithering serpents venture into right into populated areas. Amongst these creatures is the Eastern Brown Snake, the second most venomous snake on the planet. As Mike Rowe finds out over the course of his snake catching quest, these poisonous snakes occasionally make home visits. Who you gonna call? If snakes aren’t enough for you, the episode also explore the majesty of the cane toad, a scourge of Australia. Introduced to alleviate a bug problem, cane toads soon spread across the country, destroying crops…they also completely ignored the bugs they were brought to kill. Genius. Being the serious folk Australians are, one may view one of the magnificent cane toad races. If this isn’t your speed there is also a program to hunt them down, at which point they are frozen, stored, then liquefied into fertiliser…it is called dirty jobs after all. 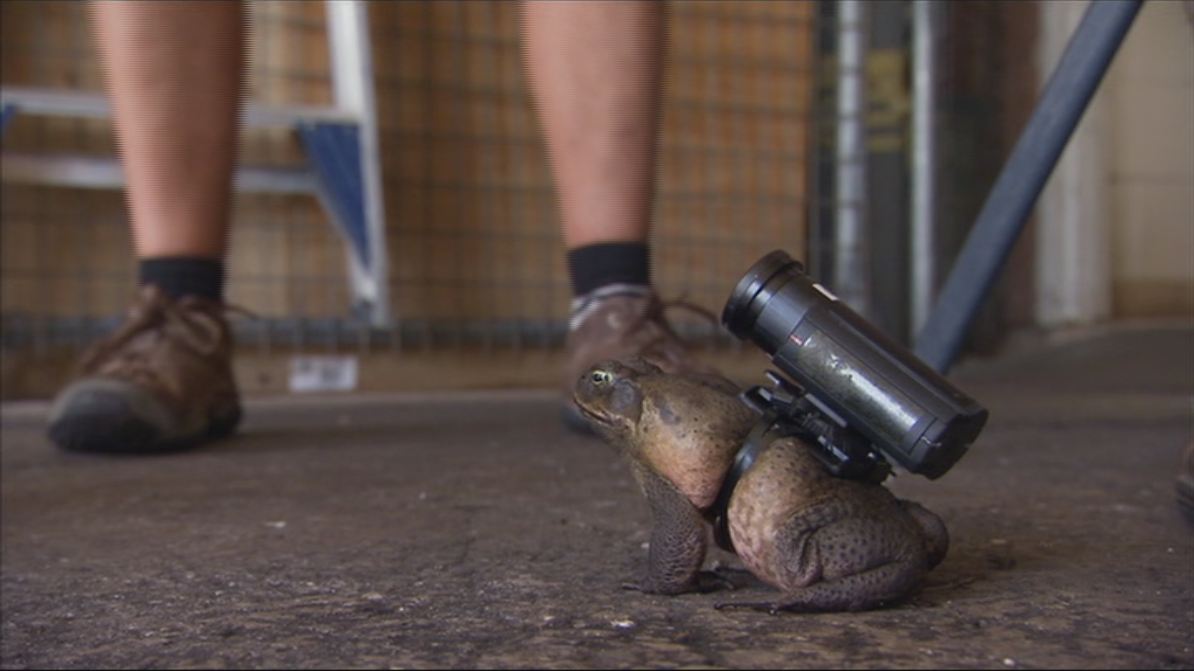 Revolutionising filmmaking one cane toad at a time

Episode Two heads along the road to Coober Pedy which, as constantly noted, is a fairly long drive. There’s even a song about it. Once there, the crew explores the nature of opal mining. More dangerous than dirty, years of searching for these precious stones have left Coober Pedy littered with holes, a fact one cameraman discovers first hand…leg first…he’s alright though. Just as with any mineral hidden within the depths of the Earth, opal mining is a hit and miss profession. Though worth a lot of money, the rarity of said mineral is a deterrent for the majority of people. Also noted in Coober Pedy is a unique golf course and the interesting green keeper, who doesn’t have any green to keep. The interactions with said green keeper also note the details of documentary making itself, such as finding people to co-operate with the show…and know what television is.

This unintended exploration into the importance of communication, is also expressed clearly and painfully during episode three. From the outset, the crew’s visit to Arnhem Land is comprised of confusion. Not enough cars, no agreement to film, wrong job, wrong place…it’s definitely interesting. Though an episode is salvaged, it is somewhat less…polished than the rest. That being said, it does suit the shows style, being a more relaxed documentary series than most. Which helps when dealing with some of the most laid back workers you’ll ever see, like those who capture crocodiles for a living, like it’s no big deal…it kind of is. Crocodiles are dangerous. 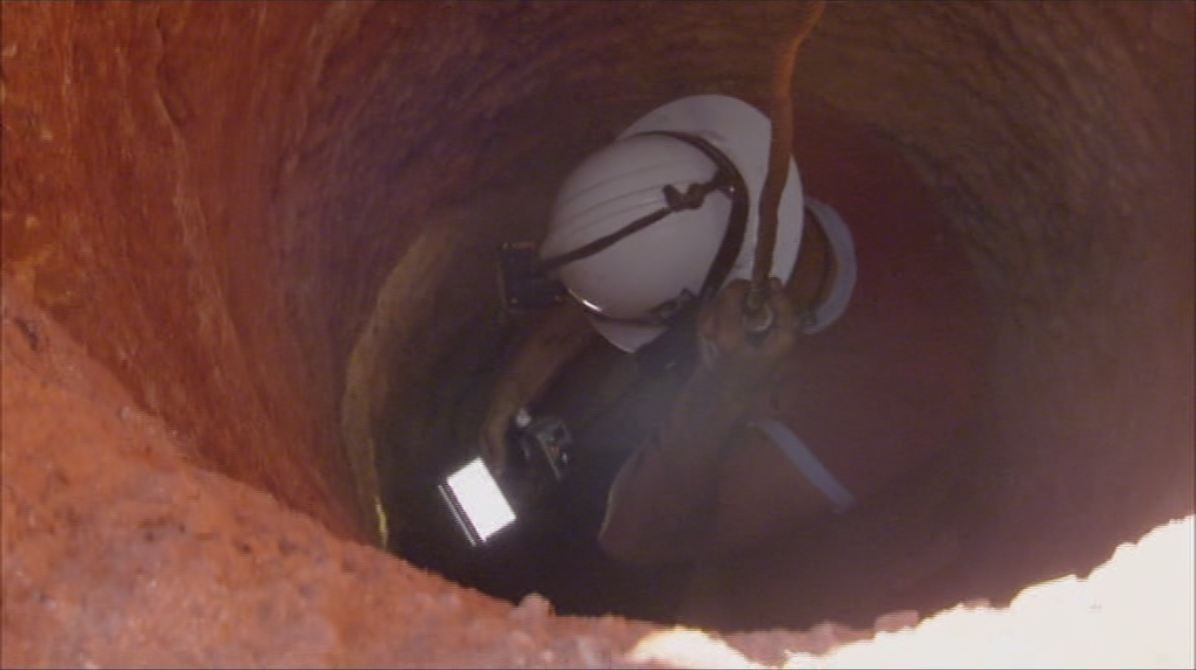 Is there such thing as a fear of depths?

Visuals
Scenic. It’s Australia after all. A majority of the show takes place in the beautiful Australian outback, showcasing the wonder of the country…and a lot of dangerous animals. As such, the documentary uses a lot of establishing shots of the environment, depicting the often harsh climate in which these jobs take place. One particular technique utilised in the series involved the camera remaining motionless whilst the host moved off screen. This was generally employed when entering or leaving an area, to express a sense of travel…or when there was a funny sign to look at.

Being a documentary, camera angles are important to the show, providing different perspectives and keeping the visual material interesting. This is expressly noted during one quite humorous scene, wherein the close up camera is installed rather poorly…and too late. Another similar incident notes how such a camera would provide an intense, interesting view of a crocodile being captured…if it was it actually turned on. When this approach actually works, it allows the host to express the intricacies of a particular task as he experiences it first hand. 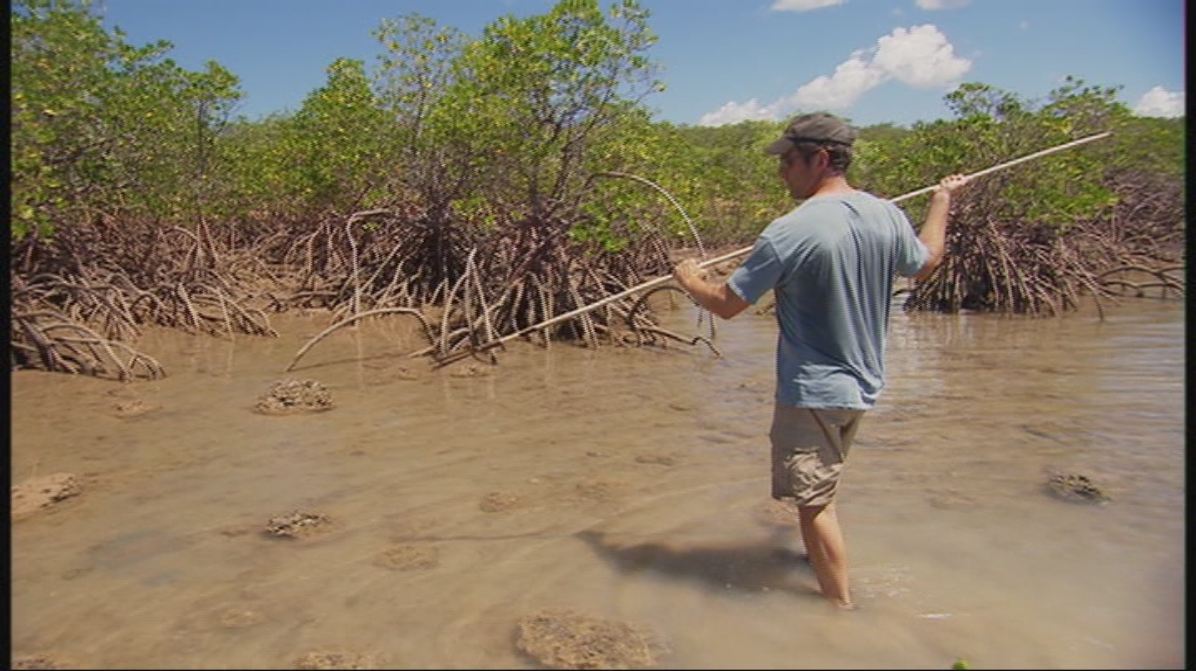 Audio
Being a documentary style series, Dirty Jobs uses audio to back up the situation being depicted on screen. Immediately setting up the Australian locale, didgeridoos can be heard during the title sequence. On the long drive to Coober Pedy, Mike note his penchant, though lack of skill, for writing songs. On such melody is “On the Road to Coober Pedy”. Sung over the course of the episode, it denotes the trials and tribulations of a ten hour drive through flat, barren scenery…It’s not the most positive song.

Also due to its nature as a documentary, the series is narrated by Rowe after the fact. This provides insight into the processes of filming, as well as the numerous problems faced when trekking across Australia. The narration also crosses over with the soundtrack at certain points for humorous effect. Rowe notes that the ominous music playing must mean that something scary is about to happen. 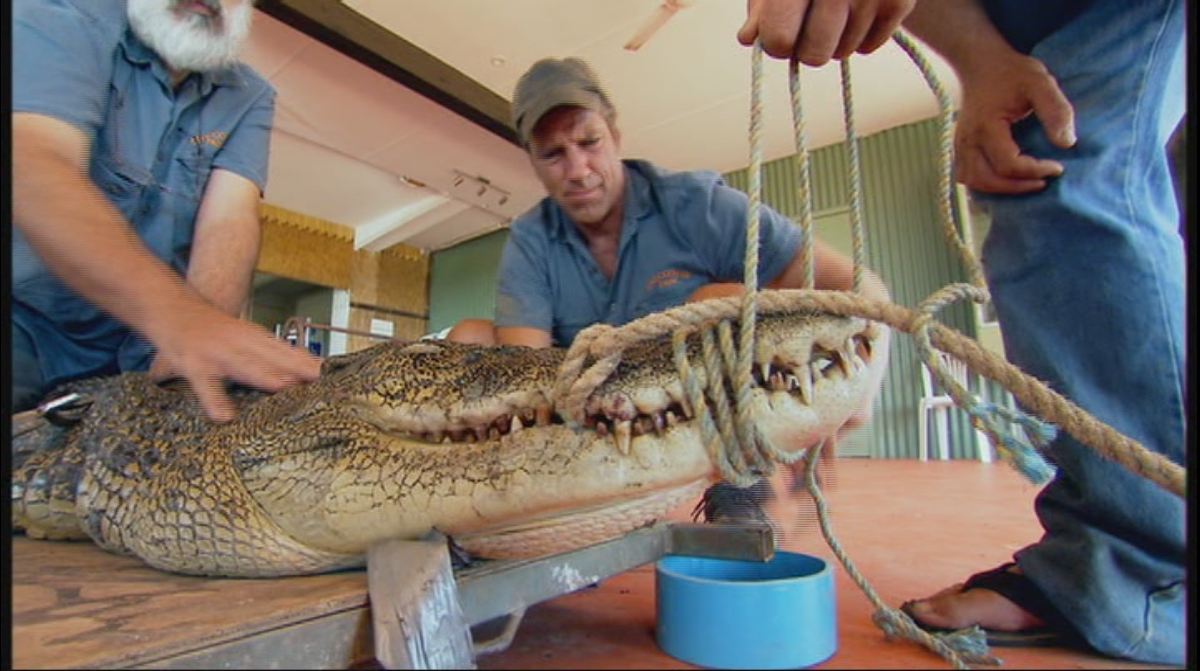 Overall
Dirty Jobs Down Under is a not so serious look at some of the more obscure jobs you’ll probably never come across. In this special Down Under Version, the jobs aren’t so much dirty as they are unique, probable won’t find cane toad hunting anywhere else…glad Australia’s got that going for it. There’s singing, jokes and enough mishaps to fill a blooper reel, were they not already included in the show. That being said, the series does provide a  unique perspective into the road less travelled…probably because it’s a really long trip. Or because of the snakes. Or the can toads. There’s crocodiles too…