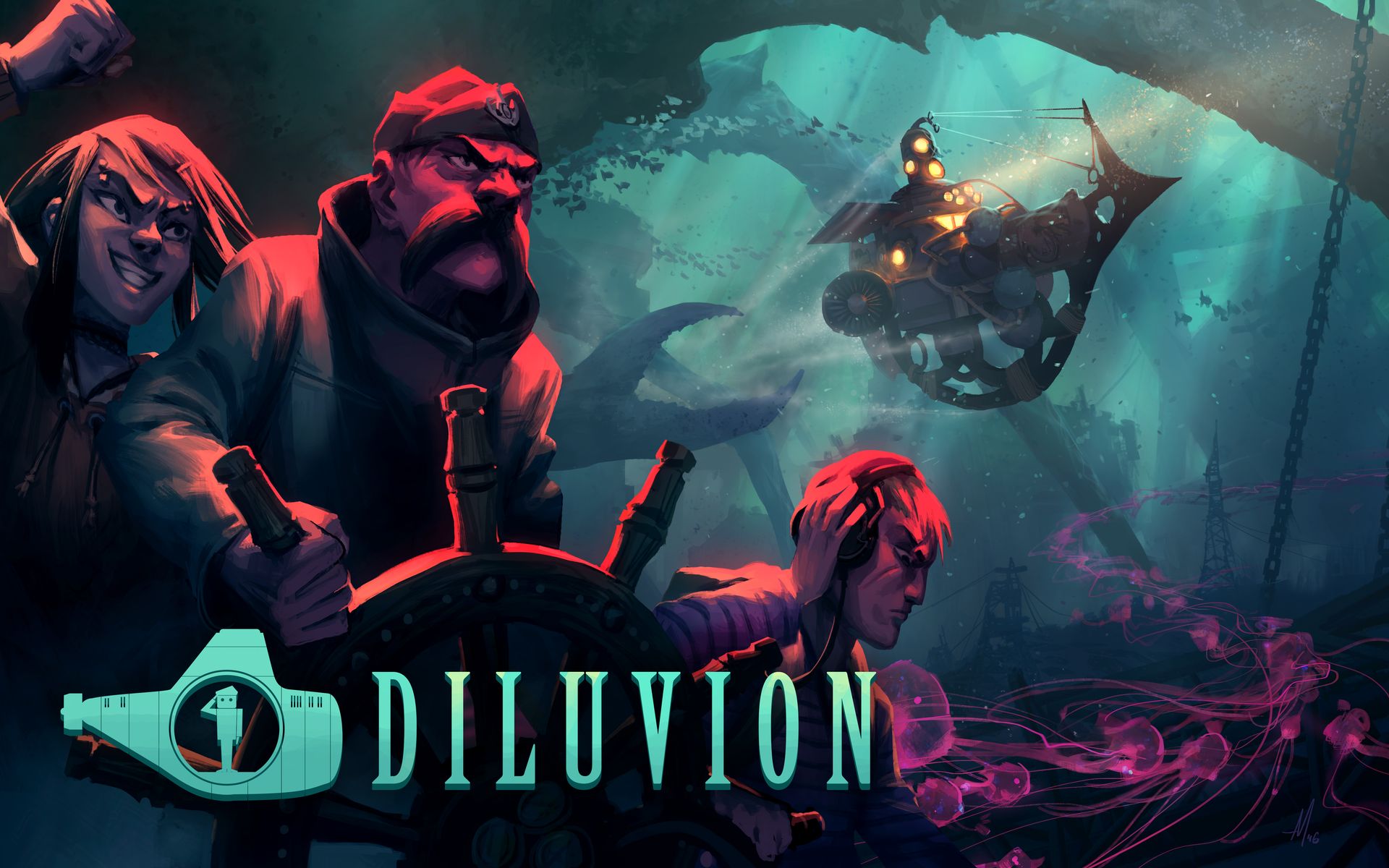 Space may be the final frontier, but we humans know more about space than the depths of our own oceans. Arachnid Games seeks to take gamers into those unknown depths in their submarine exploration game Diluvion. Players will explore a world inspired by Jules Verne in one of nine subs as they discover the remains of human civilization.

Humans existed in a perfect world, but ruined a perfectly good thing by going to war with each other. The Gods punished the humans with the Great Flood, wiping out most of humanity. The survivors were driven underwater where they now scrape together a precarious existence. Rumours has it that if someone reaches the end of the Endless Corridor, a new golden age will begin. Diluvion’s story provides a nice backdrop to the exploration. It gives the game some context and and a goal, which is something usually unseen in exploration titles. The writing is decent, though the game could use more lines for random NPCs. Considering how many potential sailors there are to recruit, it seems like the same two or three lines keep appearing. 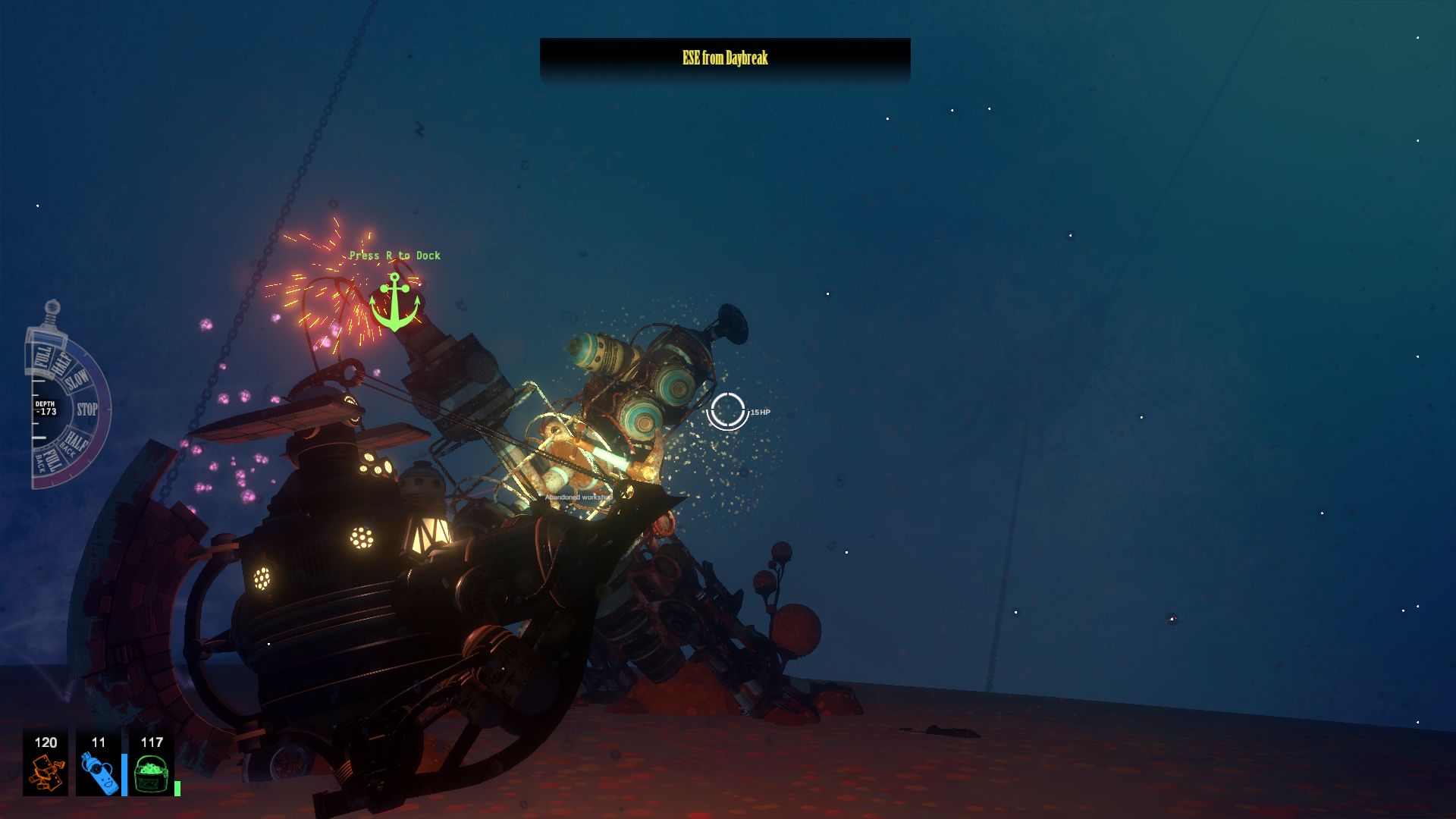 Diluvion is an open world exploration game with submarine combat. In practice, the gameplay reminds me of space sims on the more casual end of the spectrum. The submarine controls in Diluvion are simple. The sub’s propulsion system mimics a sailing ship with different increments of throttle in forward and reverse. The sub will attempt to orient itself towards the direction the crosshair is pointing, but fast turns and quick changes in depth can be executed with hot keys. Weapons shoot wherever the crosshair is pointing. Torpedoes need an extra step to lock onto the enemy, but generally handle much like the main weapons. The game provides controller support for those who rather avoid the mouse and keyboard. The control schemes are simple enough that most people should be able to be able to pick up and play.

Exploration inspired by the early days of sailing is one of Diluvion’s major selling points, but it falls a bit flat. The game’s resource management system does work well with the exploration mechanics. The crew needs to breathe air and eat food. Extra air tanks can be purchased to extend capacity and tanks can be completely refilled an unlimited number of times by docking at a station. Docking to smaller vessels like crippled submarines or small research stations will transfer over a tank or two of air only once, severely limiting a players range. On top of managing air, players will need to either scavenge or purchase food to keep the crew fed. The larger the crew, the faster they will consume resources. The expense of running the submarine discourages freely exploring the open sea. The risk and cost of randomly exploring the sea to hunt for loot is simply too great, especially compared following the storyline. The areas where story missions will take the player are often littered with many wrecks to loot, making the story mission feel like a less risky endeavour. 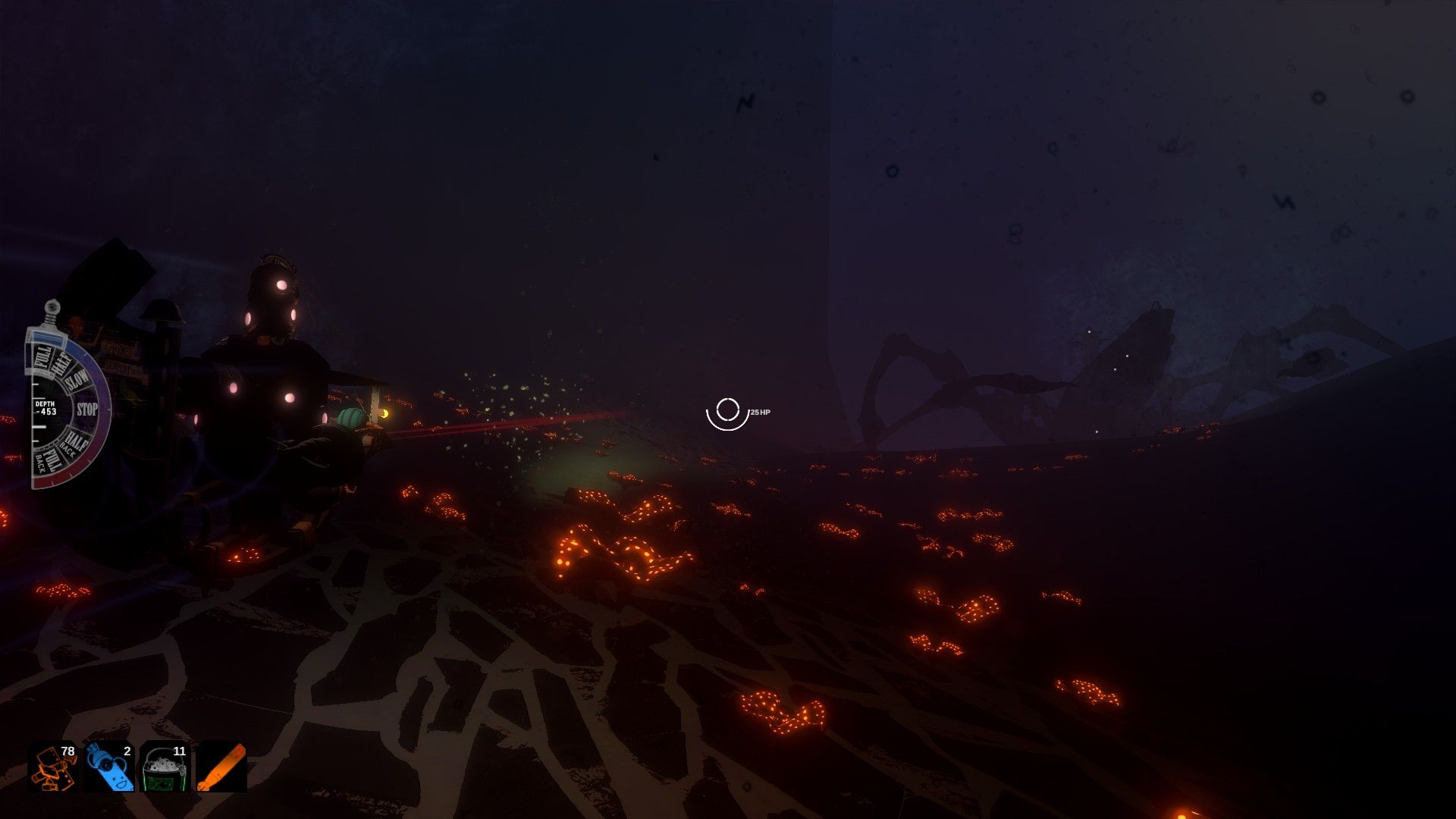 Navigating in Diluvion is probably one of the game’s stronger suits. The developers were inspired by sailors in the past that relied on simple of tools. So instead of having a magical GPS arrow, players must navigate using landmarks and a compass. The resource system adds a nice twist to navigation, as getting lost can mean death. Arachnid Games give players a little help when it comes to navigating to quest areas. Schools of goldfish are found near landmarks that will help point players in the right direction. The assistance only lasts for a few hundred meters, so players will need to take note of the compass bearings to ensure they stay on the right track. Diluvion’s hands off approach to navigation is quite refreshing as it suits the game’s low-tech nautical theme very well.

Combat in Diluvion is simple. Since the rate of fire is generally quite low in the game, good positioning is just as important as accurate shooting. Diluvion is quite generous in providing some guidance to players during combat. Crosshairs will adjust to show the rough spread of the current weapon, allowing players to hold their fire until their submarine is properly oriented for the most accurate shot. Additionally, enemies have a small circle that shows players how far to lead their shots to hit the enemies. The ship’s crew can be shuffled around in real time between different departments to repair damage or provide buffs. I found the combat to be a bit of a mixed bag. The combat itself is fulfilling, but the game struggles with an inconsistent level of difficulty. The regular enemies encountered often seem too easy, creating a bland combat experience. Boss fights on the other hand end up in the other extreme, creating an intense atmosphere that often borders on frustration. 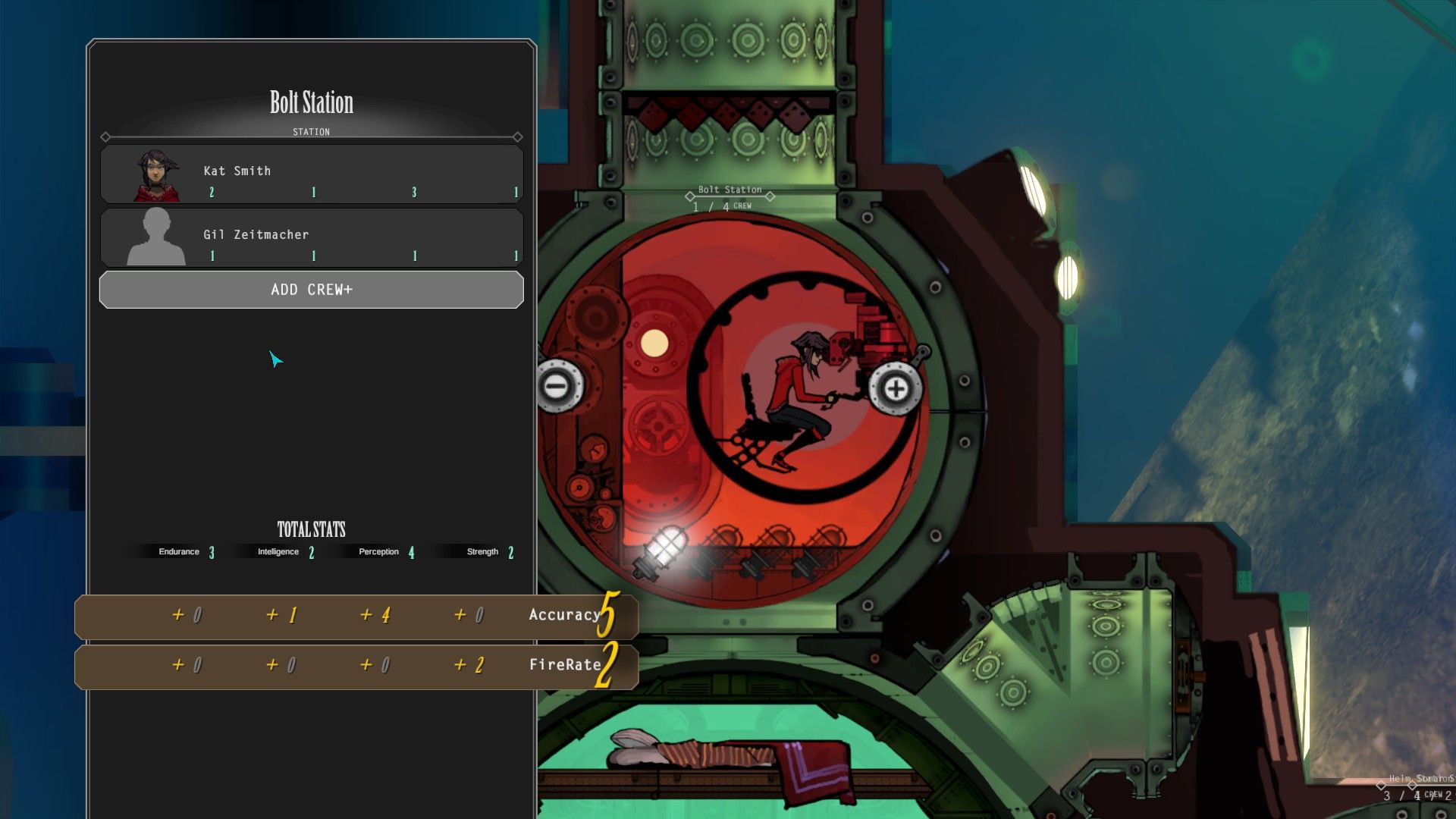 Diluvion is not without its bugs. I encountered a few occasions where menus became unusable and I could not proceed. There were also a couple of instances where story conversations with the crew would not trigger.

Diluvion is presenting in an interesting mix of 2D and 3D graphics. While controlling the submarine, the game is played in 3D. Docking the submarine will switch to a 2D view of the docked vessel, much like the 2D view of the submarine’s interior. Diluvion’s art style is gorgeous. The world is colourful, even at the deepest levels of the ocean. It is refreshing change to the standard drab brown hues that are found in so many modern video games. The 2D art serves as a gritty counterpart that emphasizes the game’s low-tech theme. On the technical side, the graphic settings for Diluvion are a bit on the sparse side.

Diluvion’s audio experience is excellent. The sound effects are enjoyable. The soundtrack is one of Diluvion’s strong suits. It is filled with songs I can imagine sailors dancing to and would fit right in with a naval film.

Diluvion shows that there is potential in a submarine game, but misses the mark. The exploration mechanics feel hobbled by how resource management is handled by the game. Combat would be very enjoyable if the inconsistent difficulty levels could be ironed out a bit. While Diluvion delivers an excellent audio/visual experience, it is hard to recommend the game to anyone but those who have been dying for a submarine game.

Diluvion shows players a world full of potential, but falls flat on delivery.
6.5