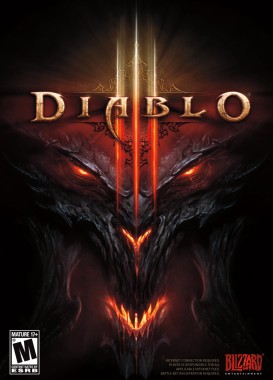 Overview
The very first time I gazed upon a Diablo game was when I found out my older brother gave the original Diablo to a cousin. While my brother was playing Starcraft and Warcraft II from the Battlechest, I made an effort to go to my cousin’s house just to get my hands on Diablo. Excitement burned through my veins as I delved deeper into the dungeons not knowing what foes I might meet. Embracing Hell for the first time was exhilarating, knowing well I might die at the hands of Diablo himself.

After several years of anticipation, Diablo II and its expansion reached the shelves of stores worldwide. A mad frenzy began as gamers clashed to attain copies of this sequel phenomenon. This time the story was richer, and I wasn’t focused on traversing deeper into a single labyrinth. Additionally, new character classes joined the fray making the gameplay even more diversified.

Now Diablo III has attained its own light. While I was downloading the digital copy, I felt the anticipation and love that its predecessors instilled years ago. Diablo is back, and my life is for the taking.

Story
First time players joining the campaign against Hell will find the story is fairly easy to follow. Cinematic videos as well as dialogue between characters will help explain the world of Sanctuary. Having experienced the predecessors quite extensively, the knowledge veterans bring with them will provide a finer grasp of the storyline and help identify special characters/items.

Your character begins in the settlement of New Tristram which resembles a dark village with little hope surviving the coming evil. After meeting up with Leah, Deckard Cain’s niece, you will embark on a journey to save her lost uncle. The cathedral in Old Tristram holds the secret to the fallen star – that you experience in the opening cinematic – and Deckard Cain’s frail state. Defeating the evil creatures that have spawned from the emanating star, you find that the source of all the trouble is human. Your next quest is to restore this man’s memory, and find out the warning he has forgotten. 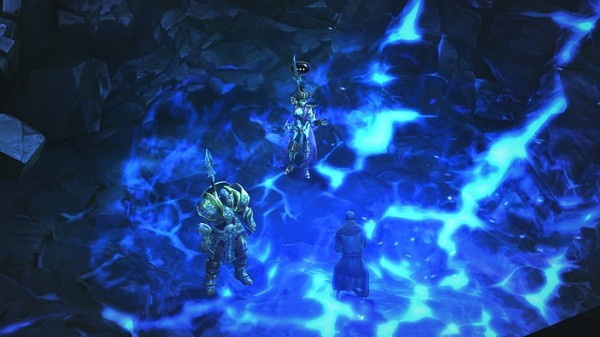 With the story progressing, more characters appear in the storyline and allow the player to develop a relationship with them. Similar to the mercenaries used in Diablo II, three companions become available that can assist a player through his/her journey. Unlike its predecessor, these companions develop their own story that can be learned by talking in town.

I felt intrinsically more vested into the storyline than anything else during the course of the game. There was a continual need to complete the game, thus the story would be fulfilled. Like reading a great book, Diablo III is hard to put down. But when you do, you’ll want to pick it back up.

Gameplay
The biggest difference in gameplay from old generation to new lies in the distribution of abilities to specific keys. This drastic change affects gameplay in several formats: ability combinations, reduced weapon use, and no skill tree. Let’s first discuss the absence of a skill tree. Players can no longer spend points into a discipline to attain higher level spells while sacrificing other disciplines. Diablo III allows players to inherit all potential abilities while governing where abilities can be accessed. 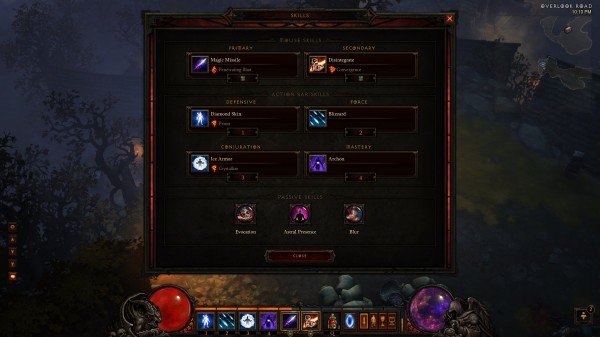 While players can inherit multitudes of abilities, they can also create ability combinations by alternating left mouse (primary) and right mouse (secondary) clicks with numbered key skills. For instance, a wizard could cast “Ice Armor” and “Diamond Skin” from the number keys and utilize “Spectral Blades” as a primary skill. This combination would allow the wizard to be invulnerable for a few seconds, potentially freeze attackers, and cause splash damage to immediate vicinity targets. This combination will not burn out a wizard’s arcane supply because primary skills have 0 arcane cost.

Ability combinations are extremely important, yet they draw from basic forms of attacking. For example wizards can use their primary abilities to no end. Therefore, a wizard could technically go through the entire game without using an equipped weapon by solely relying on primary spells when arcane power is limited. In fact wizards can only utilize an equipped weapon by first draining their arcane pool and continuing to use the right mouse. This can be a mild sore on a veteran player that loves to use a heavily gem studded weapon. 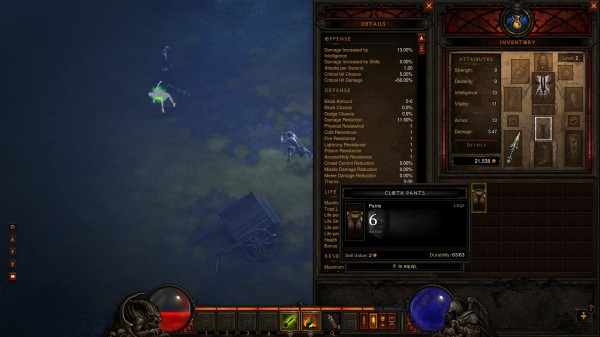 As players increase their level, every aspect of the increased level is done automatically. Sadly, base stats such as Strength and Dexterity cannot be upgraded unless acquired through item bonuses. This greatly reduces the player’s input in customized builds like sword mages. Mentioned previously players inherit all abilities upon reaching a certain level. In addition to attaining abilities, players can also acquire runes to customize the spell with characteristics. As an example, a monk character just attained a new rune for her “Lashing Tail Kick” secondary ability at level 7. Adding the rune will add a percent of weapon damage as fire and cause the enemy to be knocked back as well as change the name to “Vulture Claw Kick”. 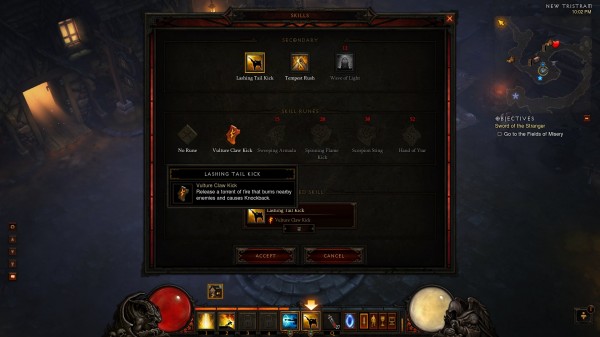 Creatures that populate the environments should always keep you on your toes. Champion creatures often colored in blue (regular), yellow (rare), or purple (unique) hues will make your life a living hell – well its where they were spawned. Among the most annoying are creatures that are able to teleport. Nothing is more irritable than delivering a final blow when the creature disappears and is replaced by one of its brethren.

Types of potions has changed a great deal since the first coming of Diablo. Before the latest rendition, health and mana potions were available to refill each pool. While health has maintained consistency – for the most part – mana has been altered distinctly for each class. Each character is able to generate or restore their “mana” through abilities or active waiting. Barbarians have primary skills that generate “Fury” and can use secondary skills at the cost of it. Wizards have arcane power that is quickly regenerated and have skills that require none at all. Demon Hunters offer a unique blend of two separate pools for ability usage (Hatred and Discipline). These practitioners of stealth can generate “Hatred” easily building up for heavy hitting abilities. However, once death is drawing near, demon hunters must rely on a slow renewable resource “Discipline” for an escape route.

One section I would like to briefly touch base on is the crafting system. Haedrig the Blacksmith and Covetous the Jeweler will both join your caravan from Act II onwards and provide decent items depending on the amount of training they receive. Spending gold on your artisans will allow them to craft greater items such as rare yellow weapons and purer gems. Gems are straight forward as lesser gems great larger ones with better traits. Covetous can also remove gems from an item scathing both in the process. Haedrig is a bit more risky as the rare items randomly generate traits. Sometimes you will get that healthy +50 Strength bonus and other times its +10% to picking up gold radius. 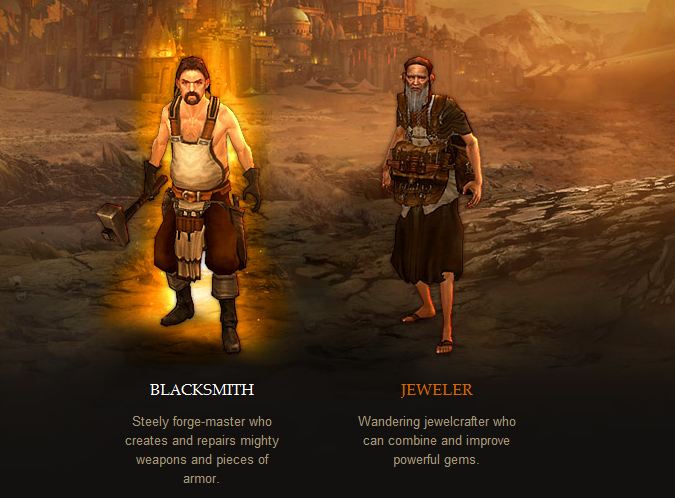 Joining private or public games can provide further enjoyment to the Diablo III experience. Once you have joined a public or friend’s game, you will be prompt that the strength of hell’s minions has grown. I will give a fair warning for those adventurers that like to wander off – DON’T! I will guarantee a cluster of imps might not impress you, but they have potential when you are alone. Create a hardcore character, and we shall see who travels alone.

Hardcore games offer even more excitement. Blizzard prompts players making sure they would like to create hardcore characters – it is that intense. Blizzard will hold no responsibility if your hardcore character dies while you are at work and your younger sibling accidentally jumps on your hardcore character and kills it off. Every kill and every boss defeated in hardcore becomes that much sweeter because you truly could die forever. Carry some extra health potions and make sure your buddy is a monk for healing.

The downfalls of the game surround the incomplete or unfinished promises that Blizzard made for the release of Diablo III. The auction house at this time is not completed for real money transactions. However, the auction house is currently working for gold to item trades. PvP battles are still in the running and haven’t been established as of yet either. If there is one thing that I have learned about Blizzard games, it is that people will wait – patient or not – for updates and expansions. I remain excited for these future additions to come and remain hopeful that the game can only benefit from them.