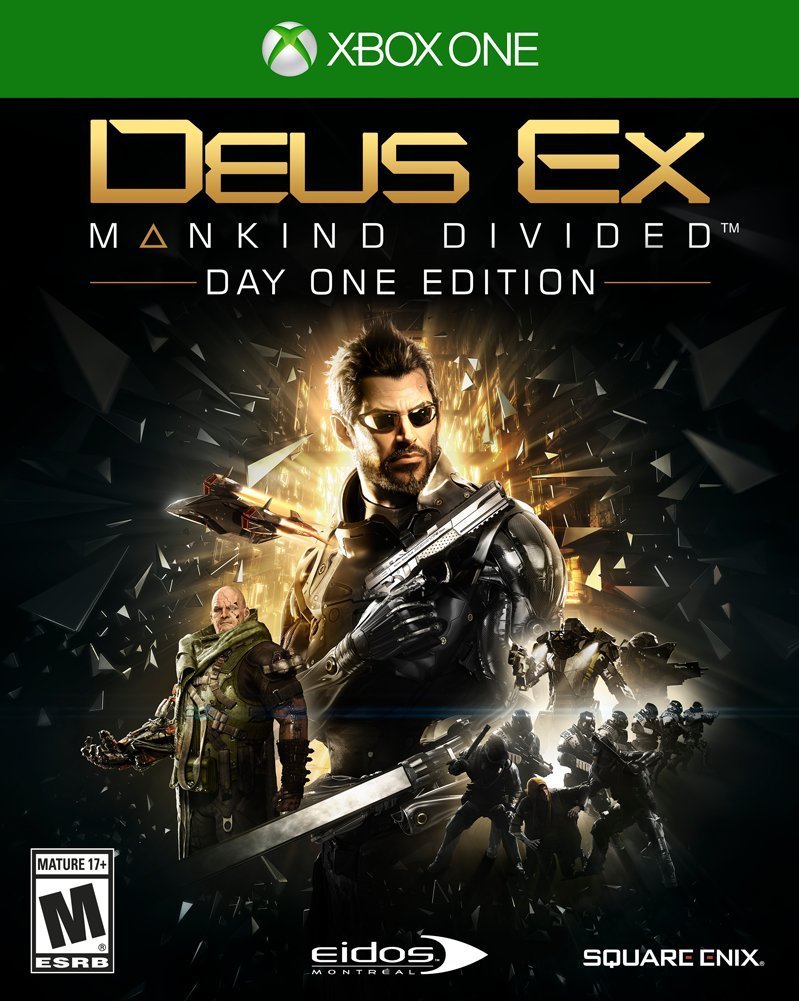 It has been five years since Eidos Montreal brought Deus Ex back to life with the release of Human Revolution and since then fans of the series have been eager to see where the company would go next. Would they follow a similar path as before or adapt the game to embrace the amount of options that fans enjoyed in the original series. Well now that Deus Ex: Mankind Divided has been released, is it worth your time?

At one time people believed that augmented humans with their mechanical and cybernetic implants were the next step for humanity. All that changed two years prior to the events of Mankind Divided when the “Aug Incident” during the final stages of Human Revolution caused nearly every augmented person to go out of control, costing the lives of many innocent civilians and although Mankind Divided follows only one of the chosen endings from the first game, the events of that night drove a wedge in humanity. 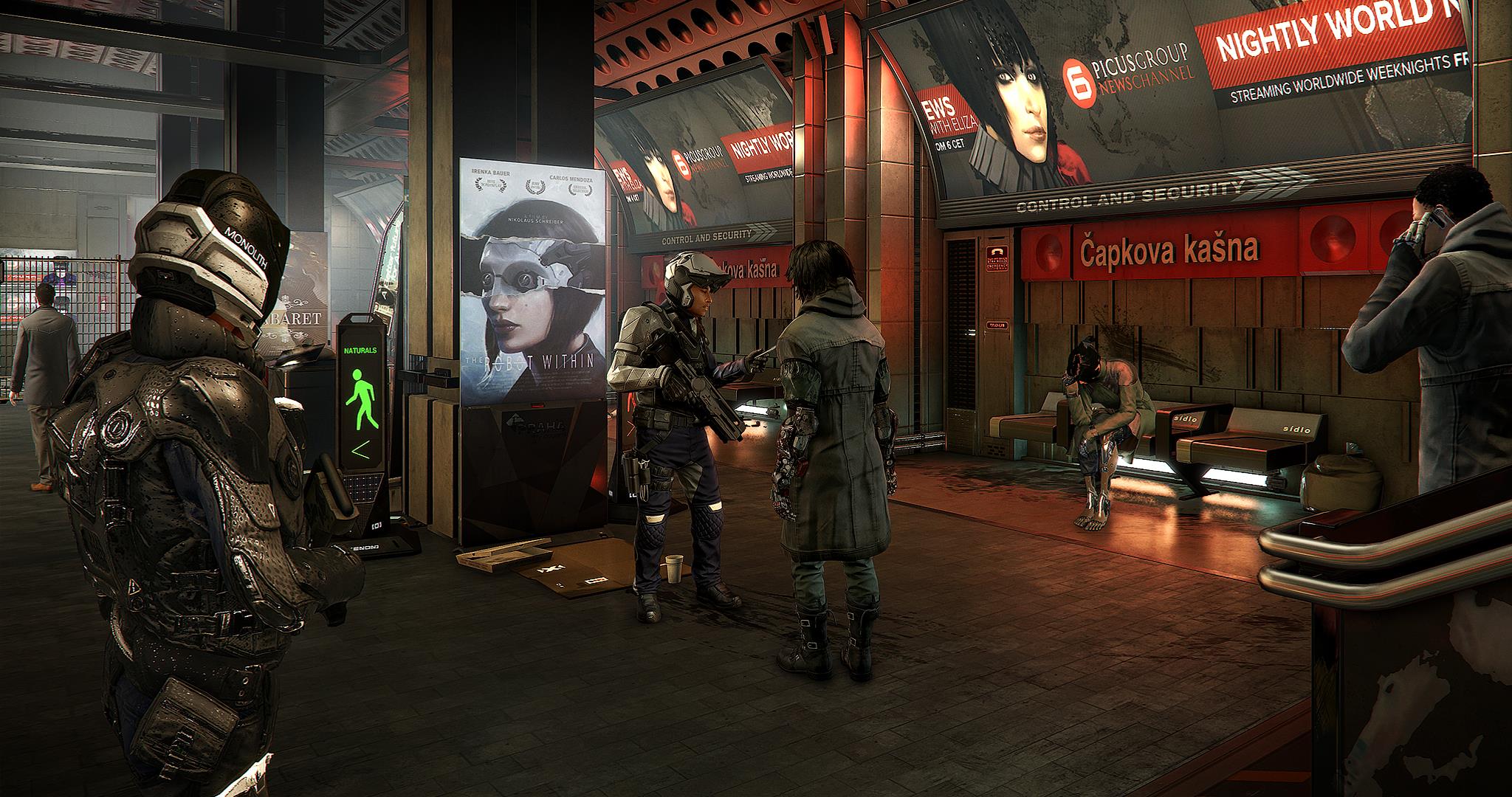 No longer employed as a security officer, Adam Jenson is now enlisted as a member of a special Interpol unit tasked with taking down terrorists as well as investigating various international events. It is clear from the moment players step outside the stating mission into the hub city of Prague that things have drastically changed in this world. While futuristic devices are still readily used by the public and technologically advanced buildings and ads are mixed in with the classic architecture of the old city, the tensions and feelings in the city live up to the game’s title.

The city of Prague is rife with discrimination against “Augs” to the point that they are regularly forced out of their homes and forced to live in slums, are constantly checked for paperwork, forced to ride in segregated train cars, and more. This tension only grows worse when a terrorist attack takes place right as Jensen returns to the city and meets with a mysterious informant. Tasked with getting down to the bottom of who was behind the terrorist attack, Jensen will be faced with quite a few choices to make that help encourage the player to go through the game multiple times to see how things play out depending on what sides are taken and what quests they choose to take on as some choices lock out other options. 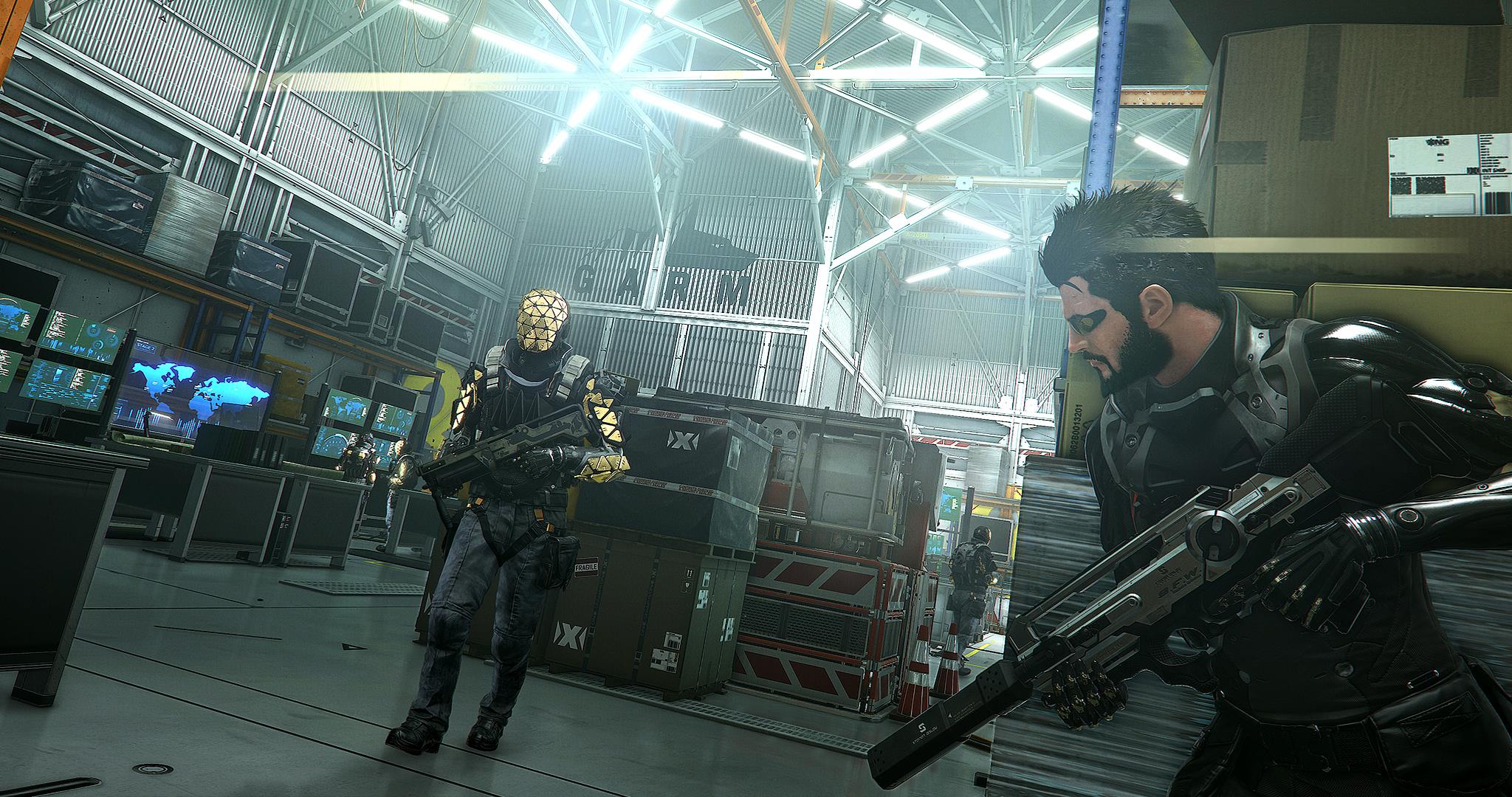 The side-quests in Deus Ex: Mankind Divided have a very organic feel to them as players will need to actively seek them out by speaking to characters or investigating something with no notification actually pointing out the start of such a quest, as opposed to simply littering the area with quest markers. This means that players are often rewarded for keeping an eye out on the world and noticing what changes as the game progresses.

Deus Ex: Mankind Divided play its social commentary card extremely heavily throughout the story but thanks to the various mysteries that are in play, Jensen (and the player) will often never really know who they should trust with giving information to or what side of the field any given character is on. This leaves players navigating a world filled with various shades of gray and this design choice has it so players weigh their options rather than choosing flippantly. Given the heavier themes in the game and the way the story progresses, the gray world Mankind Divided is set in feels like a solid fit.

In many ways Deus Ex: Mankind Divided feels like a far improved but also somewhat more limited experience compared to what was offered in Human Revolution. Players will find that the hub level of Prague, and most of the side areas that players travel to for one-off missions, are intricately detailed to the point that players can easily spend hours examining everything the city has to offer while trying to track down aforementioned side quests as well as exploring the multiple paths and secrets that are hidden within this segregated city. 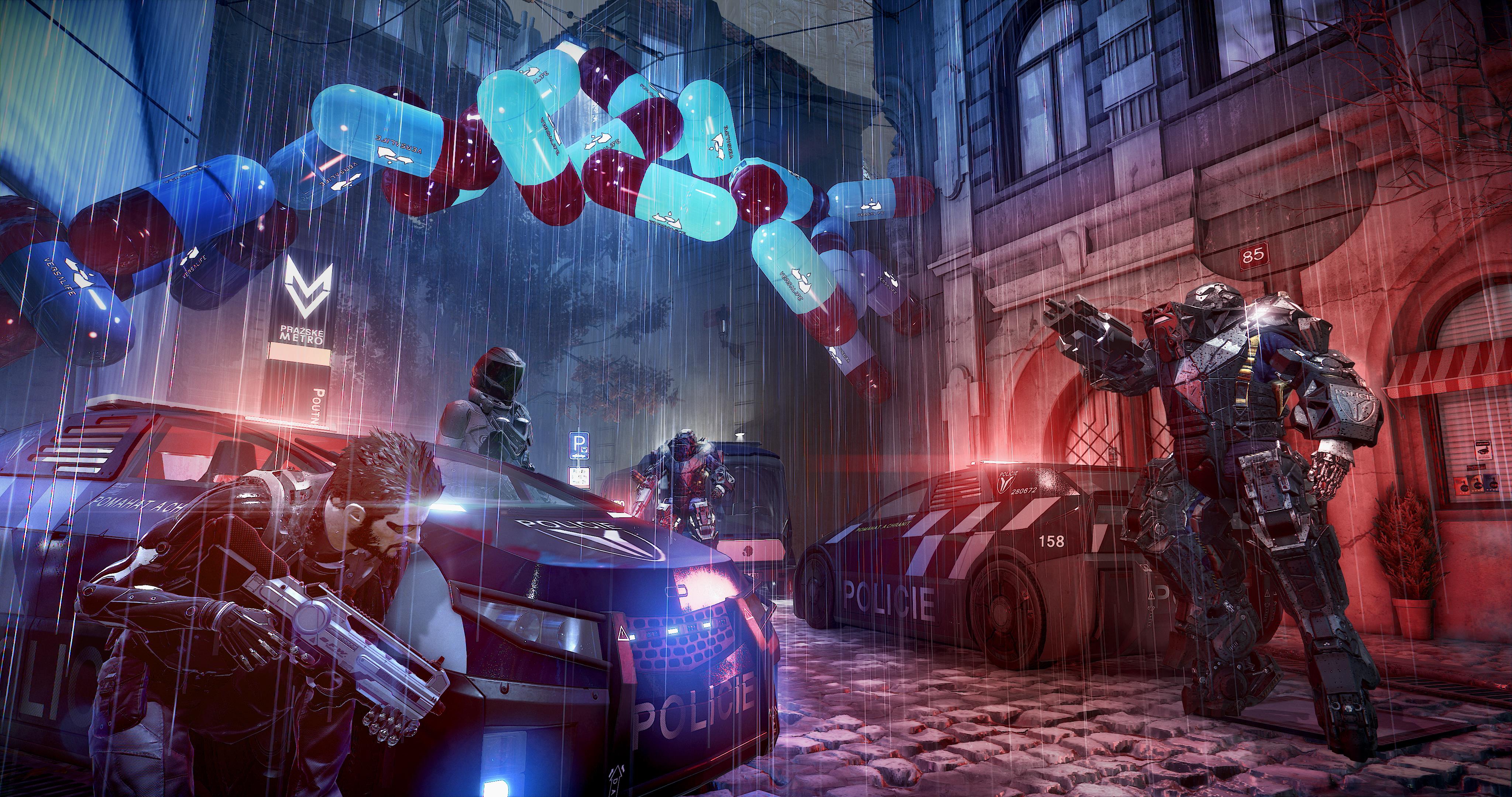 While initially limited by the fact that Jensen no longer has access to his wide array of augmentations, which is given a legitimate explanation, players will eventually be able to unlock his potential once more and by doing so they will be able to hack through secure doors and laptops using a more refined version of the hacking mini-game, lift and throw heavy objects such as vending machines, punch holes in weakened walls, carry additional items with an expanded inventory, jump to unreachable ledges and even climb up now thanks to the added grabbing mechanic, and much more as a number of new “experimental” augs have also been added to Jensen’s repertoire this time.

Choice in Deus Ex: Mankind Divided is expanded beyond the story aspect as players are free to play this game in any manner they wish. Depending on what abilities you have access to, there are numerous routes to tackle objectives and face off against enemies. Feel like killing everything in sight? No problem as the game features a wide array of deadly weapons that can now be customized using a handful of attachments and improved using crafting parts gathered from the world that an also be used to create items and ammo. Feeling stealthy? Well then a number of augmentations allow for quiet movement, long distance hacking, temporary invisibility, and most weapons offer ammo types such as EMP bullets designed to stun mechanical items or armored soldiers while the standard non-lethal tranq rounds and stun gun always play a heavy role in those who choose a pacifist route. 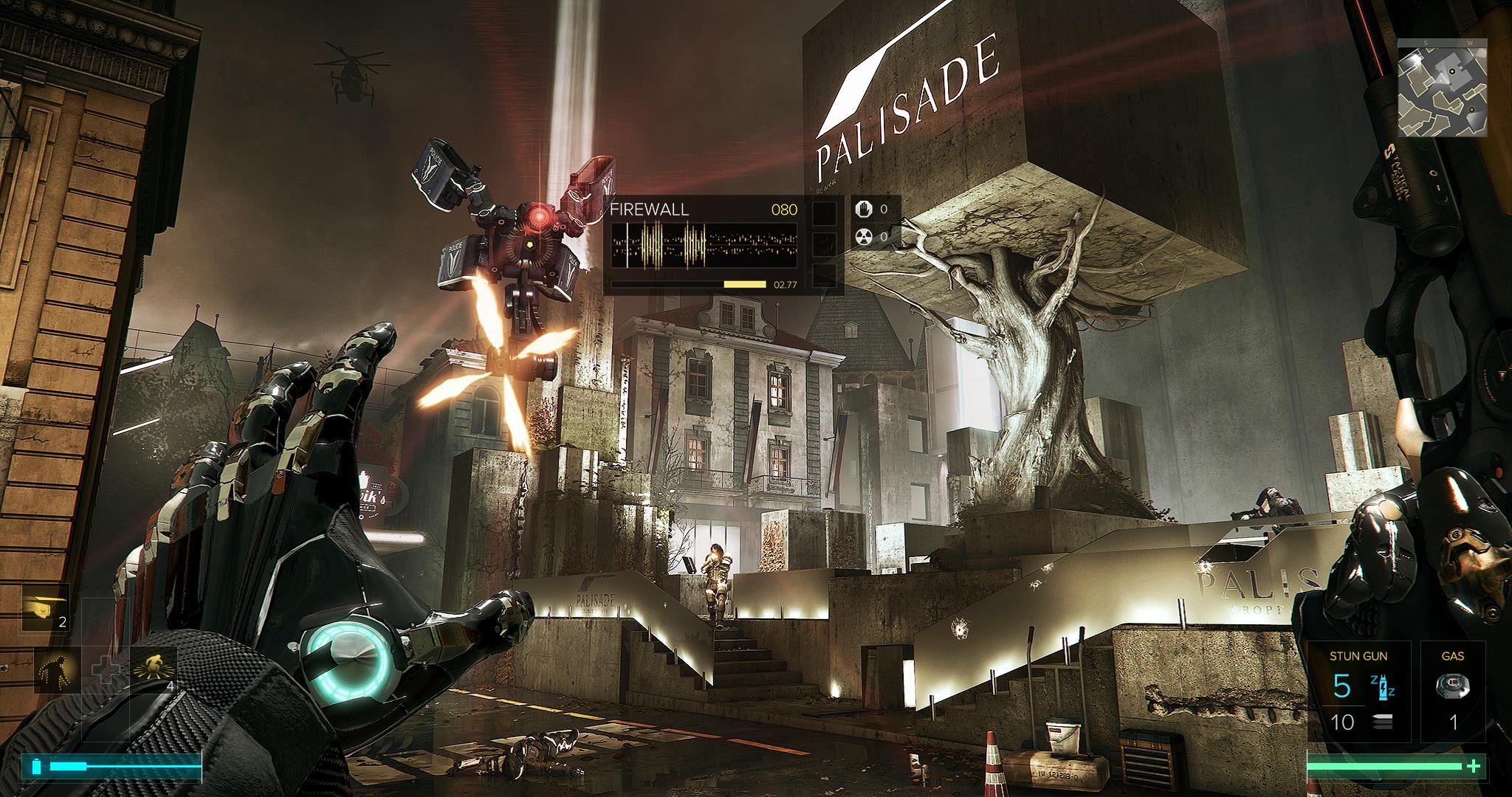 In fact, playing as a pacifist who talks his way out of conflict or avoids it altogether has been expanded greatly as numerous side quests, main quests, and even boss fights can be resolved without conflict or with one button press through the use of dialogue or clever navigation through a level. Even augmentations such as the previously deadly Typhoon now can be altered to only eject stunning gas rather than explosive rounds. These little additions and tweaks to the core gameplay of combat and stealth added in with the numerous routes that every stage has to explore means that players can easily play through this game more than a few time and see something new every time by altering their style.

It is worth noting that Deus Ex: Mankind Divided also offers a modified energy system that is a bit freer to work with than the original title. While players still need to use Biocells to refill the meter completely, a small portion always recharges and allows players to temporarily use their augments at will without feeling like they are wasting precious resources just to clear a small area. 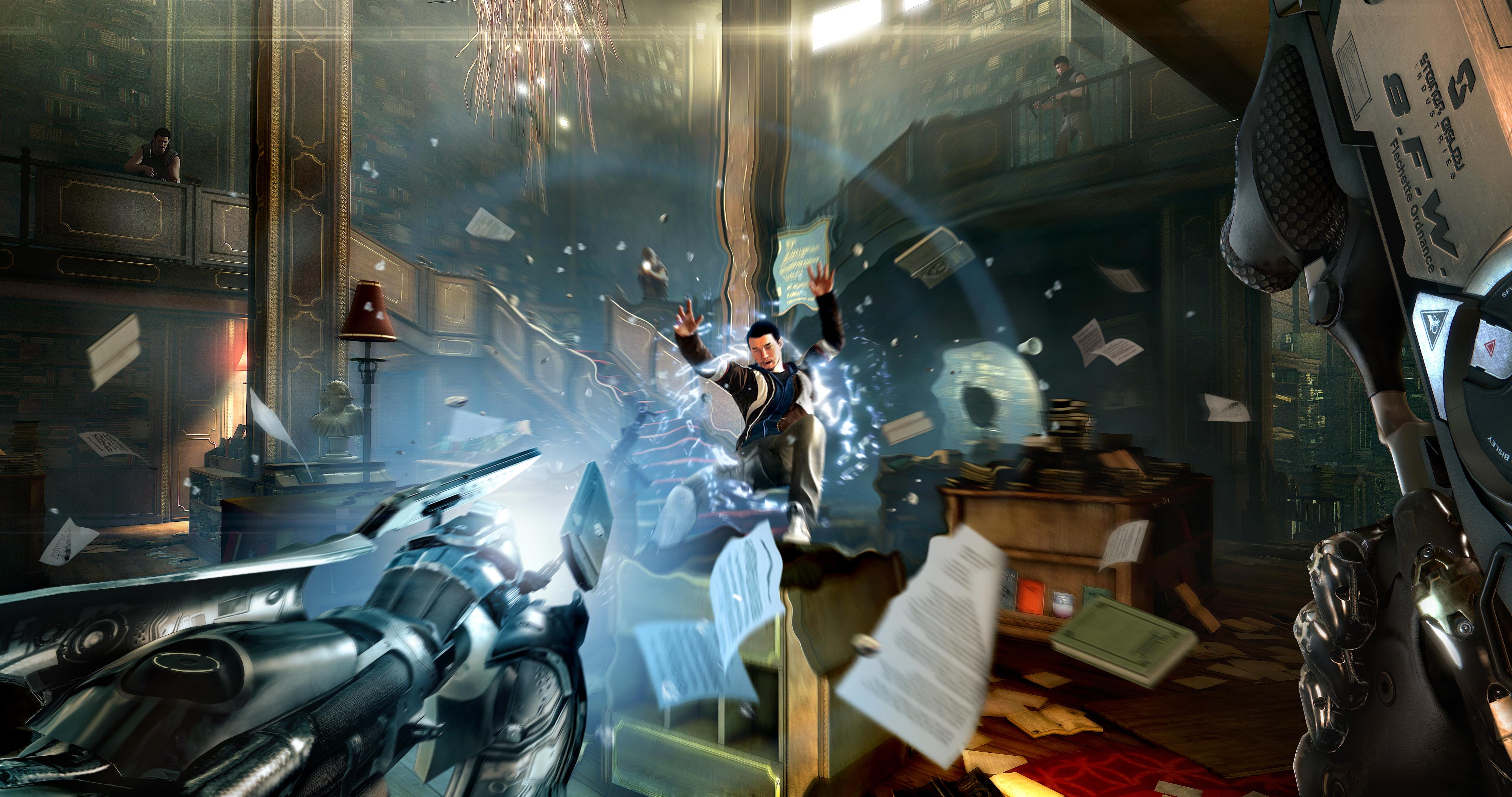 While many additions to this game have made it a far better offering than the first game from the developer, not everything that has been added in is great. A number of the new augments that players can unlock do help spice up the gameplay but others are just fancier versions of things that players already have access to. Using the Titan armor to survive explosions and reduce all incoming damage to practically zero or launching multiple stunning barbs with the Tesla upgrade is a huge plus but things such as being able to launch a nanoblade or blasting an enemy with a very noisy P.E.P.S. to stun them adds little to the experience.

It is also worth noting that although the levels in the game are highly detailed, the package feels smaller overall as players spend most of the game exploring Prague with only main story missions temporarily bringing them to other areas of the world and even these are far more limited in nature outside of traveling to a city designed for the augmented. There were also a few times that various aspects of the game glitched out such as temporarily losing the ability to lift heavy objects, enemies that were knocked out suddenly spasming wildly and stretching only to die as a result of the physics going out of control, and drops in the title’s frame rate during heavy action scenes. 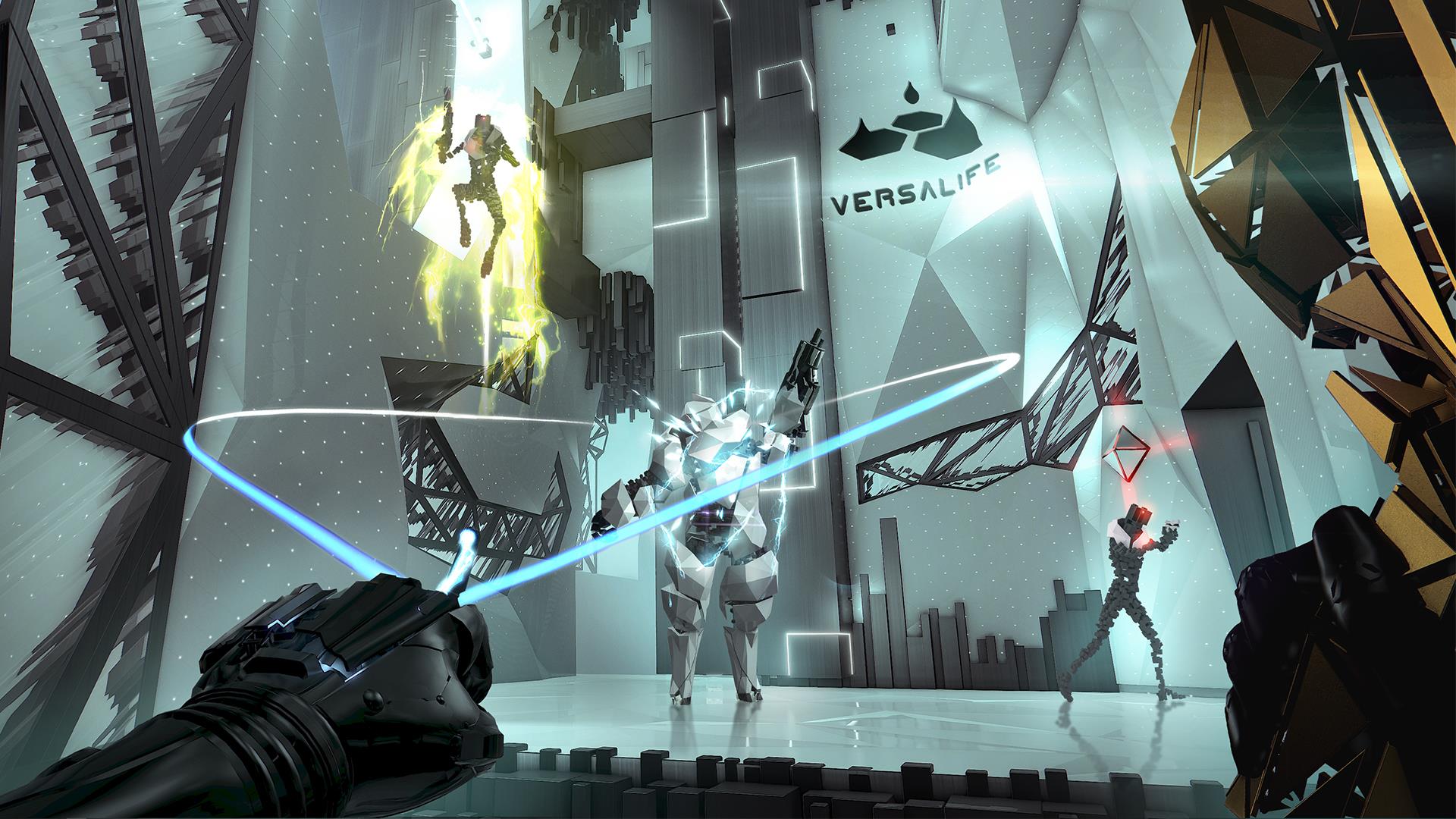 Outside of the main story mode players will also find that a new mode called Breach has been added in with this game. Breach takes place in a virtual reality setting where players must navigate through increasingly difficult stages to retrieve data and complete objectives in the fastest time. As you progress players will earn points depending on enemies taken down, speed of completion, and data downloaded and while this isn’t a huge offering, it is substantiated enough that those willing to challenge others on the leaderboards will enjoy the mode.

As mentioned briefly before, the world in Deus Ex: Mankind Divided has undergone a very interesting change as the title is set in an old world city where old architecture butts up against high-tec buildings and advertisements. Each area in the game is heavily detailed with a lot to see though surprisingly the actual character models present in the title are a bit lackluster in appearance which is rather disappointing, especially when you notice the designs of NPCs begin to repeat in various areas. 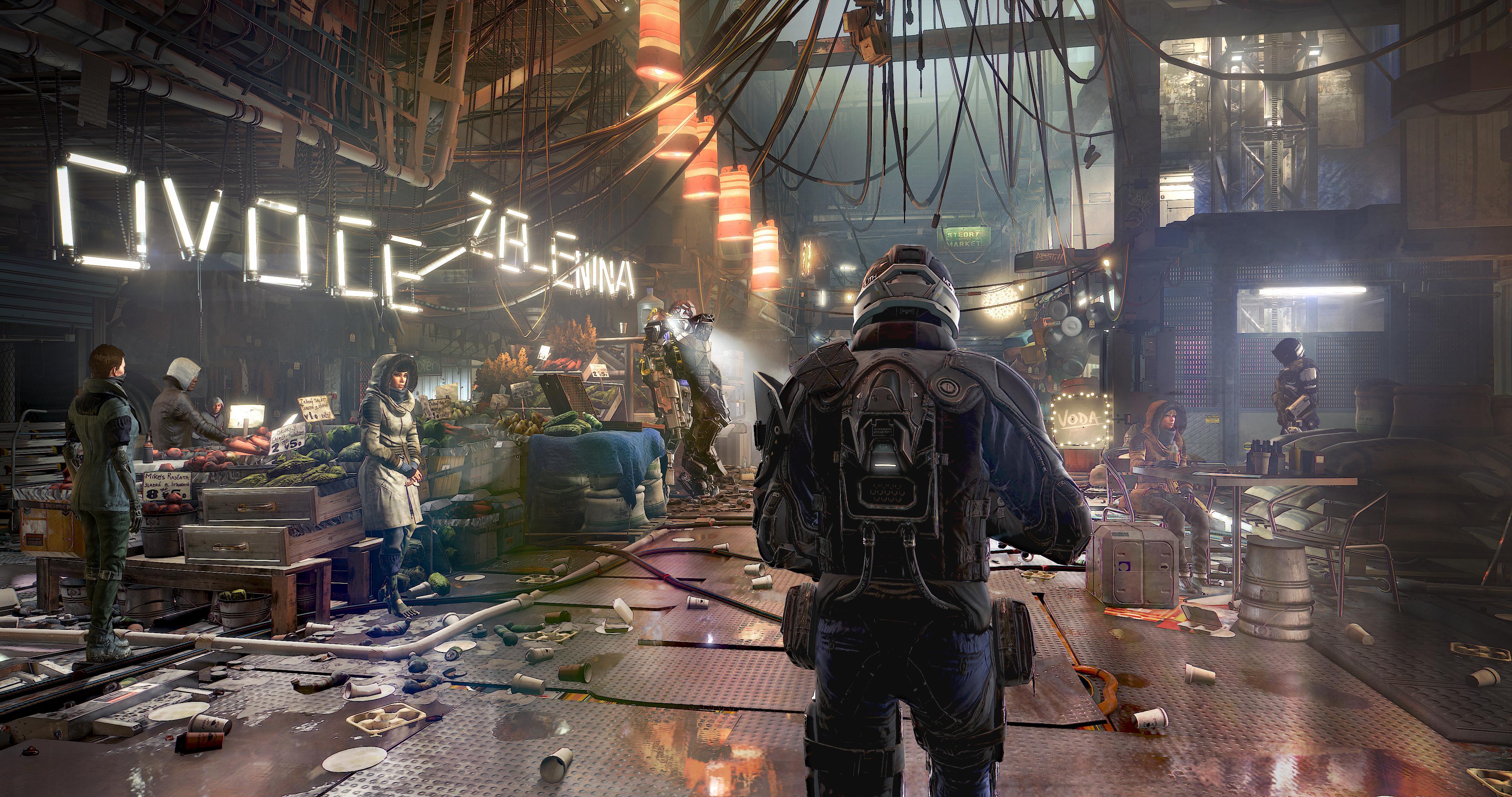 The voice work is fairly impressive with Jensen’s voice actor standing out at as the best of the bunch while the soundtrack is a wonderful treat that fits perfectly with the game’s aesthetics.

Deus Ex: Mankind Divided feels like a far more polished adventure than what fans found in Human Revolution. By offering such a wide variety of choices and complete player freedom when it comes to tackling missions while also refining previous mechanics such as the hacking those who come into this game will find an extremely engrossing title that can easily eat away at hours of your time with little trouble. With so many choices at your fingertips and options that can only be seen depending on these choices, the game encourages multiple playthroughs and even offers a New Game+ option for those who want to bring their upgrades with them. Some nagging issues remain and more than a few glitches do pop up here and there, but Deus Ex: Mankind Divided is an impressive and well deserved sequel.

Deus Ex: Mankind Divided improves many of the issues that appeared in the previous game and offers players a large amount of freedom to tackle the game’s enjoyable but limited storyline.
9