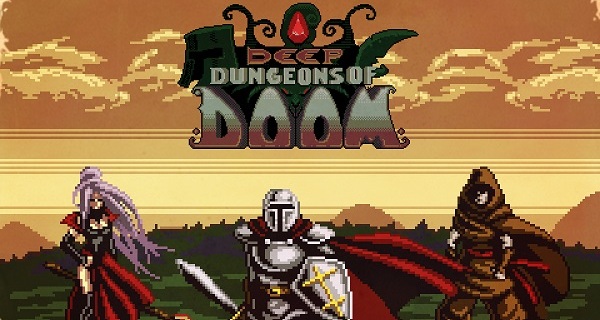 ‘Dungeon crawling’ is generally one of my least favourite aspects of role-playing games, both digital and otherwise. For me, the best parts of an RPG experience are the narrative and role-playing elements with combat generally not being as satisfying by comparison. There are some games for which an increased focus on ‘dungeon crawl’ combat such as the The Legend of Grimrock and Paper Sorcerer does make elegantly streamlined and fun experience. Deepest Dungeons of Doom (DDD) follows this streamlining ideal to an extreme in its own variation of the ‘dungeon crawl’. It was recently ported from iOS to PC and I took it upon myself to venture into its depths and discover what horrors lay beneath its retro pixel art style. 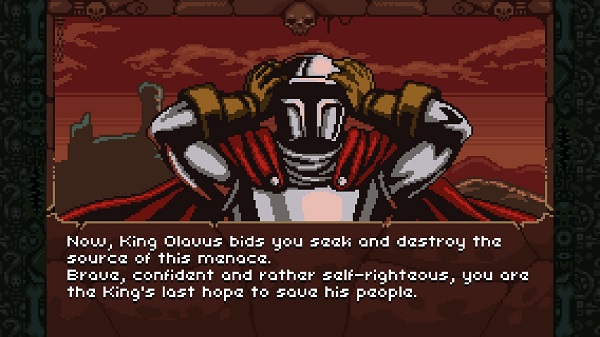 The story of DDD is simple enough with the player taking on the role of an adventuring hero and ridding the world of evil… one dungeon (or dungeon-like environment) at a time. Although the story is rudimentary, it does leave plenty of space for the writing to shine through, which is humourous and reflexive in nature. The main characters that the game focuses on are the witch, the crusader, and the mercenary. These three characters all have their own persona, which comes out in the writing between areas, with the crusader largely being completely blind to the moral duplicity of his two companions (largely due to his own self-righteous assurance). My one qualm is that the narrative can be seen as overly simplistic, but I don’t believe the developers were aiming to create a fantasy epic to begin with, so this is just a minor quibble. 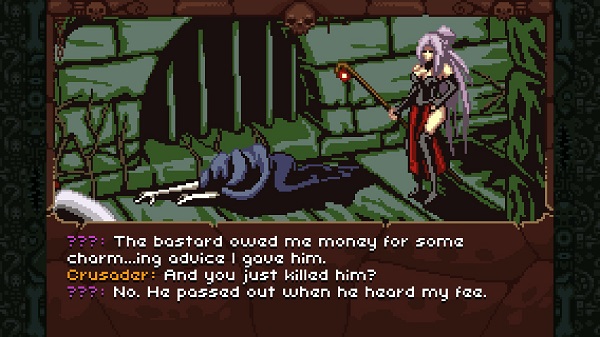 When I first read that this game was a PC port from mobile platforms, I assumed that it would be a shallow and simplistic experience with grind mechanics. I felt my suspicions were initially confirmed when the game taught me the controls which included an ‘attack’ and ‘block’. There is also an option to use any consumable items such as potions, but basically there are two controls. That’s right, two buttons are all you need to play this game (pretty much). 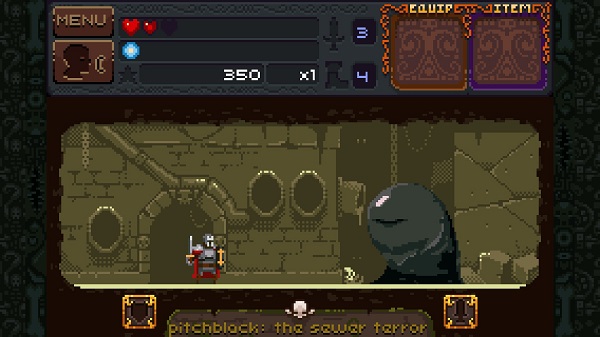 The gameplay can basically be broken down into timed button presses as you traverse down floors in a dungeon and fight the monsters you encounter. You have to time your attacks so they cool down and block accordingly when you see your foes telegraph their attacks. If you’re particularly crafty, you can time your attacks to do critical damage by attacking just as your foe is preparing to strike you. This goes both ways as your opponent can achieve critical hits on you if you time your own attacks poorly.

With these elements, I was pleasantly surprised with just how complex gameplay could actually become. Each opponent has a varied attack pattern which the player can learn to read, and each of the characters the player can choose has their own style of play. The crusader is a tough tank who can heal himself and get through fights in (more-or-less) one piece. The witch has powerful magic attacks but has to manage her mana reserves. The mercenary has a low cooldown for his basic, puny attack but can charge up his attack to do significantly more damage. 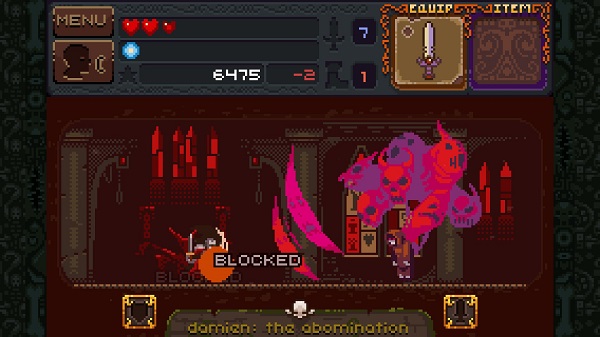 My original assumptions of the game being an extended quick time event were quickly proven wrong. I would liken this game more to the experience of playing Mario where you learn the route through the map slowly and get further and further to victory during every play through. This game has similar topography which must be learnt and adapted to.

The game also provides a sense progression wherein you unlock new abilities and power-ups with the gold that you acquire from your adventuring. You’re also able to buy consumable items and equipment before you venture down. The real progression will come from you honing skills and over time you’ll swap out various upgrades you’d bought previously to match your improved playing style. This is immensely satisfying. 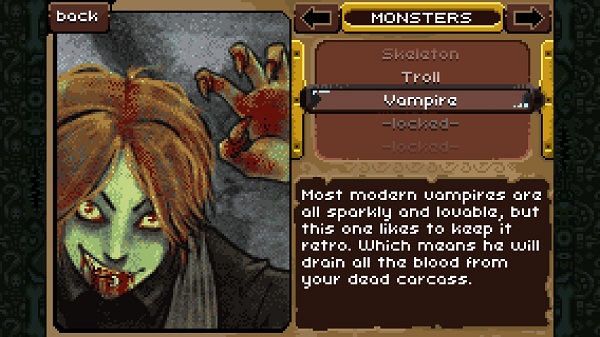 This game basks in the light of our retro game heritage when it comes to the visuals with everything being given a cute pixelated art style (even the gory deaths of various dungeon fiends). This visual style is pleasant enough, although it can get annoying at first when you’re trying to determine the attack patterns of an opponent. The in-game encyclopedia also has some nice artwork to go along with the entries on the various subjects within the game. Overall, I consider this to be one of the nicer looking games even with its knowingly dated graphics.

The audio is similarly reminiscent of retro games with 8-bit tunes playing throughout the game. This sound design is similarly charming with the music fittingly adding to the high tension which battles already create. I would not be surprised if the soundtrack becomes remixed into a chiptune at some point in the future as it is pretty catchy. 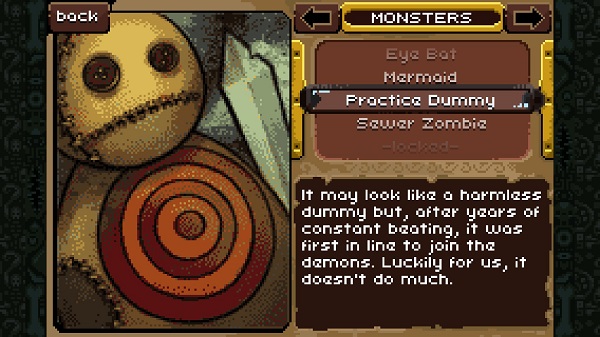 This game proves the age old adage that you shouldn’t judge a book by its cover… or in this case, you shouldn’t judge a PC port of a mobile game prematurely. I honestly had fun playing this game and it’s short, compartmentalised design means I can sneak in quick dungeon crawls during lunch at work. This is a fun game to play on PC and it’s very easy to get past it’s mobile game pedigree with the stringent demands the game asks of you. Deepest Dungeons of Doom is one of those games which actively forces the player to improve themselves in order to progress in the game and I gladly recommend it to those who are interested.