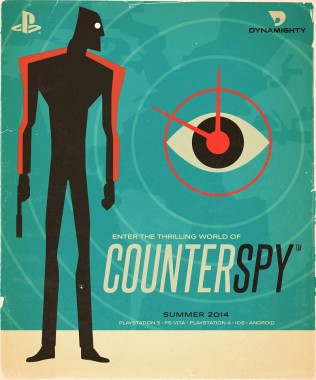 CounterSpy is a side-scrolling stealth shooter with procedurally generated levels from Dynamighty, “exclusive” to PlayStation (although an iOS and Android release is in the works). CounterSpy is a cross-buy and cross-save enabled title, so purchasing on the PlayStation 4, for example, with give you access to the game on the PlayStation 3 and PS Vita as well. Though it has been classed an indie title, SCE Foster City Studio also had a hand in its development. 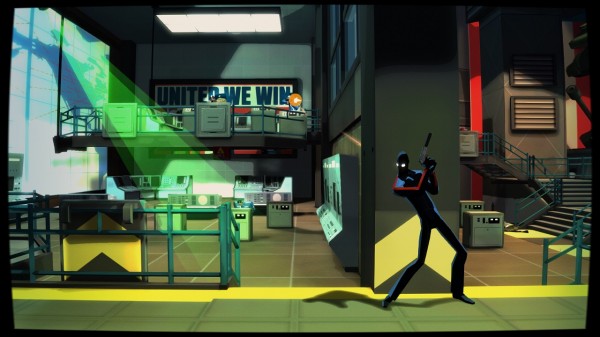 CounterSpy is set against the backdrop of an alternate history Cold War. The story is absolutely absurd in that, instead of the ‘Space Race’ for the first country to land on the Moon, the two warring parties – in this instance referred to as Imperialists (the U.S.A.) and Socialists (the Soviets) – are battling to launch a missile at the Moon. That’s right, with no true understanding or care for the warning that it would pull the Earth’s satellite into the planet’s orbit and cause a mass-extinction event, the two sides commit to this insane competition of pure machismo. This absurdity, however, is a clear hyperbolic caricature of the war itself and the nations involved. C.O.U.N.T.E.R., the agency who takes it upon themselves to sabotage these plans, opposes the Imperialists and Socialists in equal measure. The player takes on the role of their premier field operative, tasked with finding the launch plans for either crazed superpower and foiling the launch. In regards to storyline, as you progress through the levels, a handful of humorous interactions between the agent and home base are displayed in text, with a short cut-scene playing to mark the finale. Otherwise, supplementary background information is given via the collectible ‘dossiers’, but that’s all there is to the narrative. 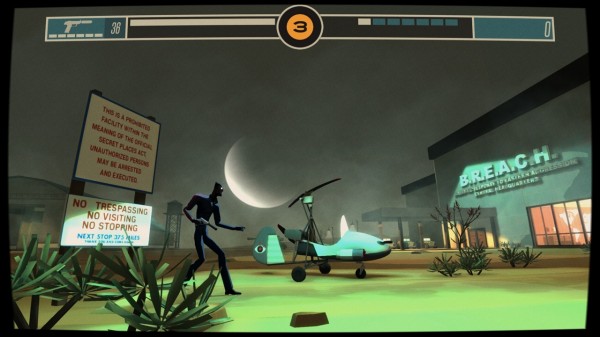 CounterSpy‘s is easy to grasp: progress as silently as possible, grab the launch plans, and get out. Being a 2.5D side-scroller, the player advances left to right as the 2D camera tracks along with their movement. But, then there are spots of cover where the camera moves behind the player and the game becomes somewhat of a gallery shooter. Some of the larger areas also deal with a lot of layers in verticality, and where it becomes confusing is some enemies will be standing offset, closer to the foreground than the player character, facing in towards the main path, and you’d instinctively think that means they will see you approach. But nope, they don’t. Sure, let’s just walk up and melee them in plain sight. And sometimes enemies in the far background can miraculously see (and shoot!) through walls as you stand behind them. Couple this with almost unfairly concentrated groupings of enemies, and it’s virtually impossible to get through a stage – having collected everything, mind you – without being spotted. CounterSpy becomes less of a stealth game, practically forcing you to enter conflict. 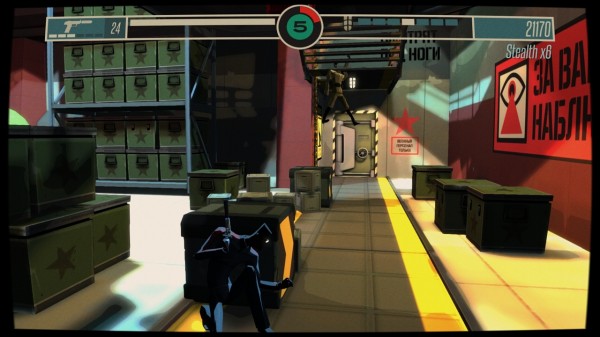 Yep…blew him up and his head and arm got stuck in the stairs above. Imagine the reaction of the guy patrolling there!

Getting called in by suspicious soldier, or spotted by security cameras raises your DEFCON level, which, once at its maximum, starts a countdown to launch that can only be avoided by sprinting to the end and aborting it/ending the level. Destroying equipment, which provides blueprints for weaponry, dossier entries and formulae – boosts that can be bought and selected at the start of each level, much like the your arsenal – also alerts A.I. to your presence. But, get an officer (wears all white) alone and he will surrender, immediately dropping the DEFCON level by one. Enemy types range from soldiers to captains with machine guns, grenadiers and rocketeers. Rockets fly at such a comically slow rate, as to allow players to shoot them mid-air. Ammo and health can be accessed in the levels, thought they are sparse in the latter stages. Certain formulae have very helpful effects, such as allowing you to run in silence or shoot through helmets/armoured security cameras, so save some money and invest! And CounterSpy might be a single-player game, but there is a competitive element to proceedings, as a ‘Rival Spy’s score will be presented for you to beat, and you can even find your fallen comrade’s body in the next level for a significant bonus.

Right off the bat, players will be struck by the classic espionage-genre credits roll, with likewise signature music. The camera following the bullet across screen, the wipe transitions, all accompanied by an up-tempo beat, full of half-steps and accented by those trademark horn blasts…it all screams 60s spy film, and composer Jess Harlin (Lucidity) was perfect in his execution. As the player reaches the main menu, they’ll immediately notice an extension of the retro feel with the lo-fi television tube frame that persists even in gameplay. The screen also suffers from intentional speckling as if you are actually using an old TV with a loose antenna. The colour-palette is wide, but slightly faded, again lending to the overall dated vibe, while visual cues are brighter and clear. The characters in particular carry a cel-shaded style that just works for the atmosphere that is established. While the written text describing the location at the outset of every level and all the propaganda posters are quite funny, the biggest laugh came after a patrolling soldier found his dead pal, and said “oh my God, they killed Johnny!”. Hear it, and you’ll be in stitches every time. 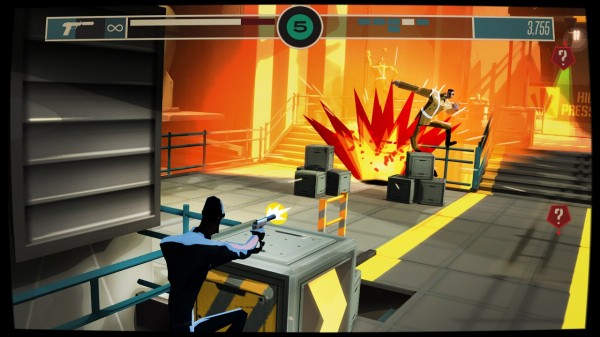 The enemies’ necks disturbingly stretch once the ragdoll physics kick in!

CounterSpy is fun little game for the first two hours or so. After those couple hours, however, the game gets tedious, especially after you realise that there are many more blueprints and dossiers to collect, but you can already “finish” the game by tackling the final mission. Personally, there was a growing lack of motivation to continue further only to gather these collectibles and maybe even a formula and gun or two that hadn’t unlocked yet. For completion’s sake, I did in fact march on, but was sorely disappointed by the last few unlockable weapons as nothing seemed more advantageous than the simple, yet effective ‘Diplomatic Pistol’ (silencer) and mind-controlling ‘Dart Persuader’. The same can be stated for the remaining formulas. That said, CounterSpy is a well-presented, hilarious, visually distinct title that is good for those few hours, and given its cross-buy compatibility, you may end up playing it even more on the go, maybe on the train on the way back from work. Is it worth $19.45 though? Probably not. $12.95 is a more reasonable price, although PS Plus members can purchase CounterSpy at a discounted $15.56 for a limited time.