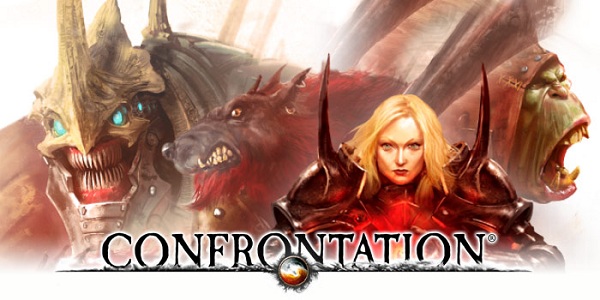 Confrontation is based on, and styled after the Rackham’s miniatures RPG of the same name. You’ll be moving your units around, attacking bad guys and triggering special abilities. The game features the “pause and play” mechanic, letting you make key tactical decisions in the heat of battle. 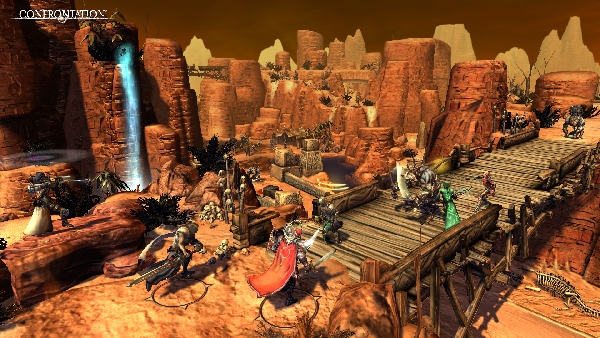 Rag’narok, the war of the age of darkness has come to the world of Aarklash. In it, four factions — represented by the banners of Griffin, Scorpion, Jackal and Wolf — are facing off, battling for supremacy, or possibly the end of the world as they know it. You start off controlling a squad of Griffin’s best, investigating the technological advances the Scorpions are experimenting with.

Unfortunately, this story is not well conveyed during the game. Before each dungeon, a big block of text is displayed, and read aloud to you. This text is pretty dense, with lots of unfamiliar people and places spoken about, which is simply difficult to wade through. Every one of these pieces of story is pretty long, too, making it a hard slog to read through. The voice-over work for these texts is bland and generic, sounding more like a newsreader than an actor playing a character and making the world come alive.

These story pieces do set up each level, if you pay attention; but very little of this story pervades into the gameplay itself. Sure, it affects the milieu, and the types of enemies you will fight, but apart from that, you’re pretty much killing dudes until the game tells you you’ve completed the dungeon. 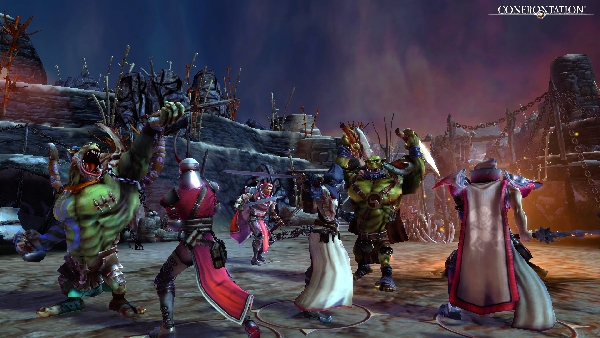 Much like many other RPGs, you control a party of up to 4 characters, each with their own strengths and abilities. As you progress through the game, you may cut to a completely different group of characters, and back again, giving you a good bit of variety, discovering what kinds of spells and special actions are available in the game. If a two groups join up at a later point, then at special “Rest” points (or before a level), you can pick and choose who will be in your party. There are 12 unique characters (or classes) for each faction, letting you really choose which direction your party will take.

The controls are straightforward; select by clicking on a unit or dragging a box around them, and right-click to move, attack an enemy, loot a box or flip a lever. The up to 6 abilities for each character are displayed with their other status details in the bottom-right when they are selected, in 2 rows of 3, all clearly colour-coded to show what kind of ability it is, as well as marked with a fairly descriptive icon to make it easy to remember which ability does what. These abilities correspond to the QWE and ASD keys for the top and bottom lines respectively. This makes playing the game super easy, and leaves you time to focus on the strategy and tactical orders you wish to give your squad. 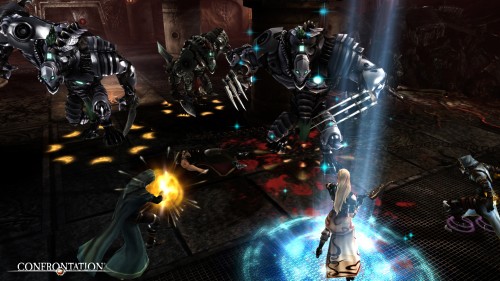 This brings us nicely to the battles themselves. When facing an enemy, you can use abilities and give commands in realtime, but you can also tap Space to pause time. Once paused, you can still zoom, rotate the camera and move around the battlefield. But now you have time to analyse the situation and plan your strategy accordingly. You can use an ability at the perfect moment to maximise it’s effectiveness. You can also queue up commands by holding the Shift key while making them.

Any command you make may be denied because the unit cannot reach their target, or it doesn’t have enough stamina, etc. to perform the particular action. Some actions can give you more stamina for health, for example; or moving further away from your target may allow you to charge against them.

Unfortunately, these commands are not taken into account when you queue up any commands that rely on those previous to it to be available. For example, you don’t have enough stamina to perform “Action A”; so you queue up the command to drain some health in exchange for gaining stamina; you may think you can, at the same time, queue up “Action A” that uses that new-found stamina, but you can’t. You have to go unpaused, wait for the unit to get it’s needed stamina boost, and then use “Ability A” separately. This is a minor quibble, but it’s really the only thing putting a wrinkle in the otherwise pristine combat system.

As you explore the dungeons, you may pick up weapon and armor upgrades, talismans to add little bonuses to your units by attaching them to their weapons and armor, and bandages to do a little in-battle battlefield medic duty. As you beat bad guys, your party picks up XP, which you can then spend on the character’s stats, which in turn affect the effectiveness of different groups of abilities, or just straight-up strength under fire. All this adds up to a robust, though largely unexplained, upgrades system, and lets you decide which of your team should be the Tank, and which should be the DPS.

Sometimes the pathfinding can be a little flaky, characters tripping on a wide open gap, or moving as if through treacle when “too close” to another character. But as movement itself isn’t an essential part of combat, these little issues are forgivable. 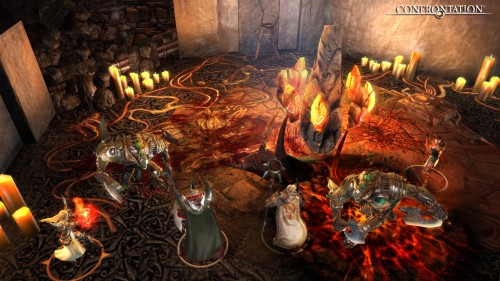 For the most part, the audio is crisp and clear in Confrontation. The sound effects are good quality and do a good job of accenting the numerous abilities and assorted combat noises. Each move or regular attack command is accompanied by a bark of acknowledgement by the unit in question, as in most RTS-style games, though these feel a tad heavy-handed, and over-played; some of the male characters have deep gravely voices, others with slimy-sounding mumbles. These voices grate at first, but eventually blend in to the background as you play.

As I mentioned above, the narration between levels is just as heavy-handed, and feels like a generic “we have to do something to keep the player interested in the story rather than skipping past the huge block of text” approach. This is a shame, as the story is very in depth and detailed. 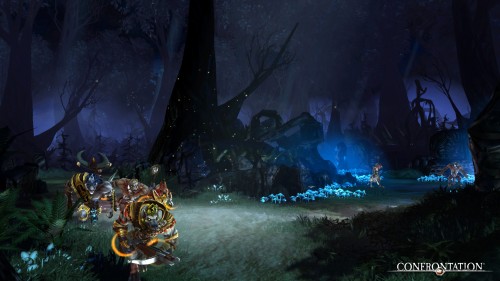 The graphics in this game are very high quality. The 3D models are detailed and varied between characters and enemies, and their animations are pretty good, though most of the action tends to become a chaotic blob of units mashed together wailing on each other with swords and axes. During cutscenes, the walk-cycles do become wobbly and jagged, however, though during regular navigation of the dungeons this doesn’t seem to be an issue.

The 2D art, also, is rendered beautifully, showcasing the superb monster and character design. The interfaces, too, look amazing, from a graphical perspective. And they work fine… though their layout often feels off somehow. The message boxes that pop up from time to time during a level, too, look hacked together and not designed very well. 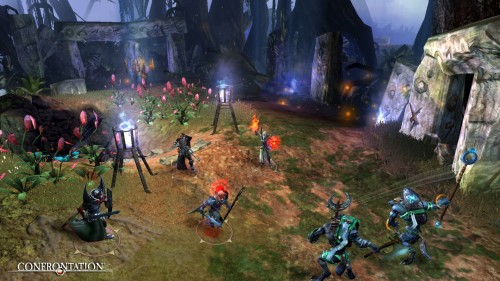 All-in-all, this title feels like game itself is very well designed and made, but a lot of the User Interface side of things have not been made with the same level of care. It very much feels as though they were made by two separate groups of people, who never worked together to bring one cohesive, consistent level of quality and design to the whole experience.

For this reason, I have given it a good mark, but not as good as if it had been the same high production quality throughout.