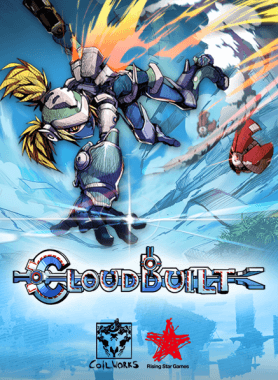 Coilworks is a fresh development team of six people out of Sweden, and Cloudbuilt is their first release. The sextet aim to satisfy the gamers of the world who want to develop and test their skills of dexterity, speed and precision. Cloudbuilt is definitely a skill-based game with a significant, organic learning curve and high ceiling. A mix of shooter, platformer and action, Cloudbuilt challenges players to speedrun these obstacle course-like levels in order to achieve the fastest time amongst friends and the world, although there’s also an intriguing story to be uncovered, stage by stage. 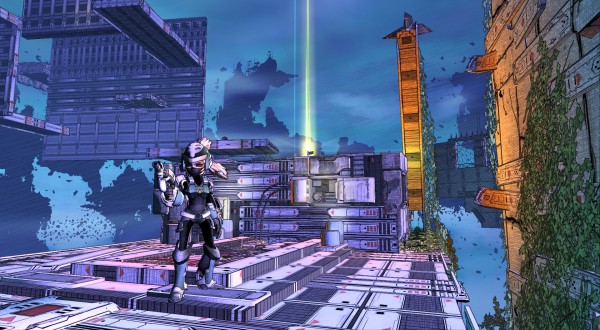 Waking up in foreign, confusing surroundings, the player character – who remains nameless throughout the journey – immediately tries to make sense of it all. Following a bright light to a red door, she sees… herself, bedridden in a comatose state. Through a series of e-logs, narrated by the character, we discover that she was a soldier in an unexpected war. Her body and mind are undergoing a reconstruction procedure after suffering severe damage due to an explosion. Choosing to follow one of four routes, the player gains new information and back-story with every level completed. The four paths offer as many takes and conclusions on the character’s experiences in this dream world. Common amongst them is the sight and realisation of cybernetics integration. Is it all a bad nightmare, however? A window into the future? A psychological defence mechanism of some kind? Or some sort of redeployment exercise? 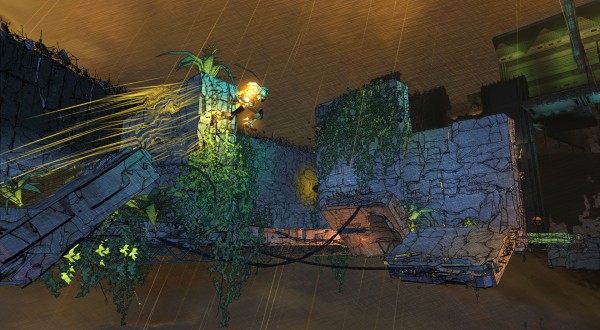 Since our hands-on preview of Cloudbuilt last month, what would become the final release build has seen some additional content added. The game has just over twenty levels to conquer, and a new Practice arena can be accessed from the level selection screen in ‘the Room’, though a short Tutorial is still present and presented to the player at the outset. In Practice, you are allowed to familiarise yourself with the controls without the threat of opposition. That being said, there is a time trial attached to the stage, but no pressure to pursue it. It incorporates all the verticality and layouts conducive to experimenting with the various free-running techniques at your command. Inside the Room, the player may also access their workstation, which simply holds all the audio logs collected so far. Finishing the inaugural level results in a branching out to two paths, and later another. Upon completion of a level, a letter-ranking is calculated by taking into account the number of lives you lost in the process and adding three seconds for each to your overall time. 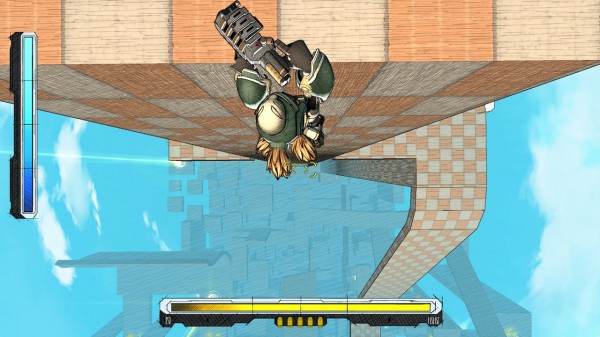 A cap is in place, limiting the number of retries possible; when they run out, you are prompted to either select a new level to try or restart the current level from the very beginning, ignoring any checkpoints you reached. Depending on which ranking you receive, the cap is increased by one or more lives. In that respect, when stuck on a hard section with your lives whittling away, it could be advantageous to tackle an easier level on a separate path to build up your cap and give you an extra shot at success. Traversal is free-flowing and fluid, with customisable button mapping enabled. On default, Left Shift is your Boost, with Release Grip assigned to Left Ctrl – the only input I remapped, although also the least used. Running up and across walls is as easy as jumping at the required angle and holding Boost, throttling it to maintain elevation on a wall run and releasing it to gradually descend. Boost is governed by an energy bar that slowly refills. Much like health, it can also be instantly and strategically replenished with a well timed pick-up, allowing you to continue a climb just that much longer. 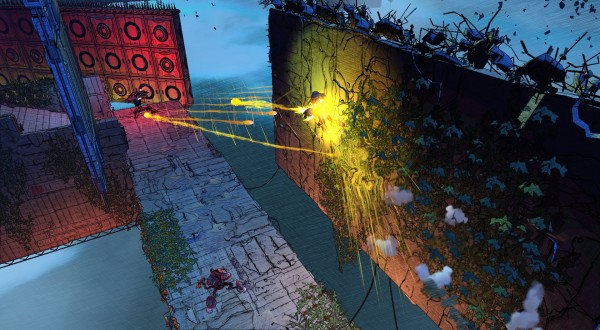 Robot, turrets, moving lasers and mines endeavour to stifle you, but charging up a gun blast will incapacitate the majority of your obstacles, while expert timing will be necessary to surpass some particularly formidable areas. The excellent use and placement of these adversarial elements, along with the fantastic layout of the geometry mean an increasingly challenging game that will necessitate intelligent approaches and instigate skill-building. There is hardly ever a single pathway to take in getting from point A to point B, but they are all balanced by differing risks and rewards. If Cloudbuilt is somehow not arduous enough for you (who are you?!), you can always redo a level in unlocked Game Modes, such as No Ammo (self-explanatory) and Fragile (where you can only withstand one hit before dying). Rounding out the unlockable Game Modes are Super Charged – granting infinite super-charged boosters – and Beacons – changing the goal entirely as you must collect all beacons on any given level and return to the starting location as quickly as possible. 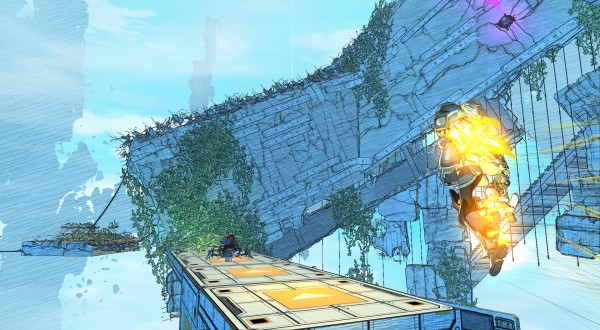 Do you remember learning shading techniques in school? If not, then you had a terribly bland school that obviously didn’t care about art… but I digress. Cloudbuilt utilises a cross-stitch overlay on the entire world that gives this pencil-drawn visual aspect that lends to the perception of a cel-shaded art-style. Although boosting through a level already feels fast, the fish eye lens aids in portraying speed in motion, warping your periphery. The landscape is appropriately surreal, being vividly coloured even in the more dark stages. It’s essentially the dreamscape of our player character, and is as individual and unique a vision as it would be in such a case – no two persons’ imaginations match up and project the exact same image, and similarly, this world’s portrayal can only originate from the mind of said character. Musically, Cloudbuilt is a more contemporary homage to 8-bit and 16-bit music, being retro-inspired but not a flat out imitation, which fits the tone of the game perfectly. 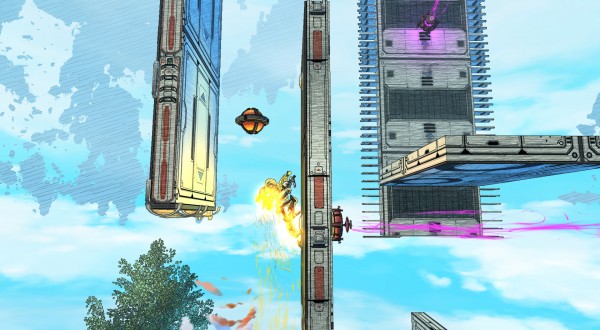 Unique – that’s the best word to describe Cloudbuilt. For a time in the games industry, unique titles and ideas were scarce, but with the rise of the Indies, a new era of creativity has captured our attention. Coilworks has contributed to the movement well with Cloudbuilt. There is ample replay-ability with the game, not only in attempting to better your standing on the Local, Global or Friends leaderboards, but also in challenging yourself to complete each level’s conditional run-throughs/further game modes. Cloudbuilt might prove hard for many, and plain frustrating for some, but it’s a rewarding experience getting through the gauntlet. While unsuccessful in reaching all alternate endings before this review, I found the story effectively weaved between the four paths, giving different perspectives as you progress along each and an appreciated sense of non-linearity to the plot. Cloudbuilt is a demanding, eye-catching and truly incomparable video game.