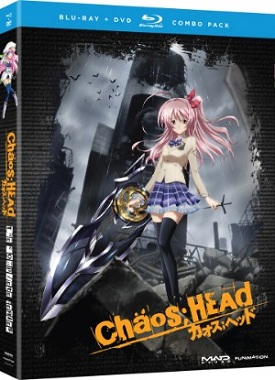 Overview:
Anime come from many different inspirations. There are those that were created originally, some that were adapted from a manga and even from visual novel games. Visual Novels are mostly only seen in Japan and focus on telling a story as the player reads through various conversations as if they were reading a book.

While most of these visual novels don’t see a whole lot of publicity outside of Japan, some accumulate quite a large following. One such visual novel is Chaos;Head which was developed by 5pb. and Nitroplus which was released originally in 2008 on the PC then was also adapted to the 360 console a year later. In-between those two years an anime was created for the visual novel and has now been brought over to North America courtesy of FUNimation. How does this visual novel translate to a twelve episode anime? Let’s find out.

Story:
The story of Chaos;Head follows a young man named Takumi Nishijo. He is a high school student at Suimei Academy, but there is something a bit odd about this man, and that is the fact that he resides in a shipping container on the roof of a building and barely ever leaves the container except for whenever he has to occasionally attend class. He is so much of a recluse that he actually created a chart of how many days he can miss and still pass. 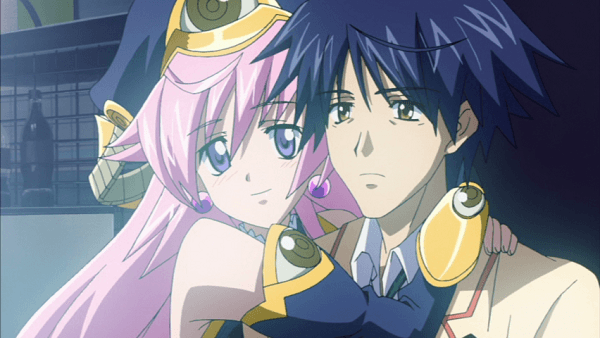 To make things a bit more sad for Takumi, he has absolutely no interest in being involved with 3D women or even real life in general. Takumi does everything he can to avoid his younger sister Nanami and everyone at school except for one friend named Daisuke Misumi and spends nearly all his time playing PC games. This is only made worse by the fact that he has created an imaginary girl who is modeled after all of the anime figurines he has in his home/container. She can best be described as a cheerleader who constantly tries to perk him up and encourage him to keep up with his current hikikomori lifestyle.

However all of this changes quite quickly as he receives a strange message from someone named The General on the internet displaying a horrible murder scene of a man and a pink high school girl standing nearby. This murder is just another in a string of grotesque murders known as “New Generation Madness”, the only problem here is that the murder hasn’t happened yet. Trying to remain unfazed however, Takumi tries to go about his day normally closing himself off from the world. That is until he stumbles across that very murder scene the next day, seeing the same pink haired high school girl holding one of the murder weapons and staring at him. 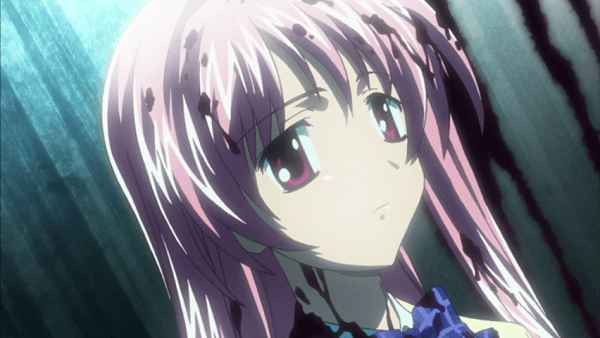 After running away from the scene of the murder, Takumi goes to school the next day to discover that this pink haired girl is actually a member of his class who is also one of his longtime friends. The problem here is… he has absolutely no memory of who she is. As he tries to avoid the confusion around him, the police start to investigate the murders with him in their sights and a number of other female classmates who all seem to have quite unique personalities begin paying him a lot of attention. Can Tatumi discover the truth about the world around him while avoiding the police?

Well not really, because the story does an amazing job of being extremely confusing at times. The story can be very difficult to follow at times, because a lot of occurrences in the world of the anime aren’t visible to everyone, usually only to the girls themselves and Takumi and considering the way that Takumi already has been suffering from delusions before he even meets any of these strange girls. This makes it hard to tell whether he is actually seeing the secrets of the world that few know unfolding before him or if it is just one giant delusion his reclusive mind has created. 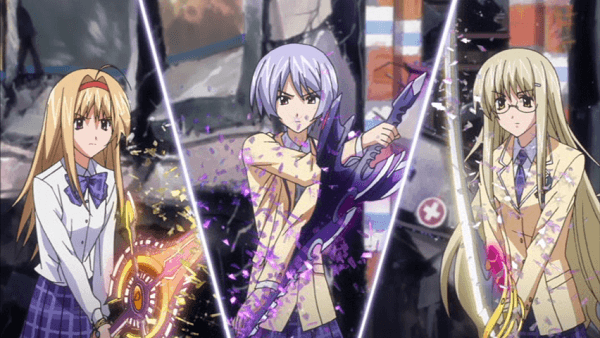 In fact the series jumps around so much that it would be difficult to even classify the genre that it would fall into. The first half of the series is more of a mystery thriller, while a massive information reveal halfway through the series marks the switching point of the series into one that is more about girls controlling Di-Swords and fighting against a conglomerate with bad intentions in mind for the world. To make things a bit more confusing, a number of plotholes are left wide open and not explained well enough to really make a lot of sense on their own. This can leave viewers with lots of questions after finishing the series, even if they watch the show multiple times trying to understand what was never explained.

Visuals:
Now seeing what studio worked on bringing Chaos;Head to anime fans everywhere, one would believe that the quality would be excellent throughout the entire series. However, it seems that Madhouse chose not to live up to their expectations and have delivered quite a few generic looking designs. Each of the characters in Chaos;Head are rather unique looking, but only from one another. In fact the various female characters all have the appearance of harem archetypes, with Takumi being the only one with noticeable differences from your standard main character. 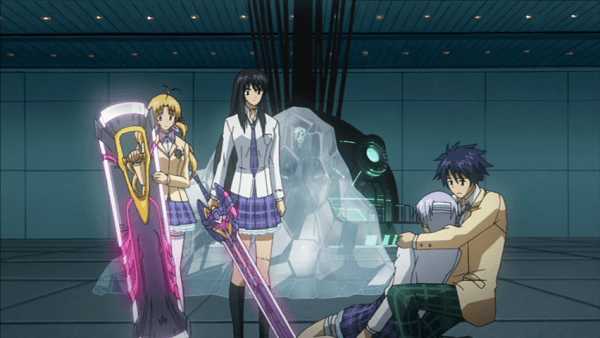 To make matters worse, there are a number of times that the character design and the artwork as a whole take a dive in quality. While this may only happen every so often it is quite noticeable. There are a few redeeming elements however, for example the Di-Swords all look amazing, both when they are in non-boot form and are booted, this is especially true whenever they are used in combat which is unfortunately not very often. Another redeeming feature is that whenever Takumi has a delusion of his own the quality usually jumps up another level, though this is usually accompanied with some rather enjoyable fan service moments.

Audio:
For those eager to hear Chaos;Head in English you will be happy to know that FUNimation has provided a complete English dub for the series, but for those purists out there they have also retained the Japanese voice track for either comparison or for people to choose which one they want to listen to more. The voice actor who handles Ayase Kishimoto, Stephanie Sheh, has also done a great job with performing the inserted songs that the character performs. Out of the two I found the English voice cast better fitting with the characters, which is quite a surprise considering the fact, as a whole, Chaos;Head’s character archetypes fall heavily into harem-like characters but avoids it just barely with the amount of mystery and delusion involved. 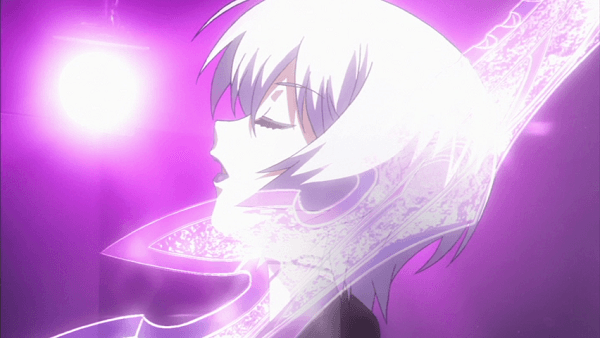 Those who choose to listen to the Japanese language won’t find any issue with the subtitles either, as they are both easy to read and easy to understand. The opening song of the series is called “F.D.D.” and is performed by Kanako Itō which sounds well enough for an opening song but could be easily forgetabble. The ending song “Super Special” by Seira Kagami is actually quite a nice lighthearted tune and features mostly English lyrics with a few Japanese lines here and there, making it the superior between the OP and ED songs though some of the English lyrics sound a bit like Engrish.

Extras:
As is standard with a FUNimation release, Chaos;Head comes with both a clean version of the opening and ending songs. However as I mentioned earlier the ending song animation doesn’t benefit at all from having a clean version, in fact it is almost detrimental as the animation shrinks itself to the left of the screen to make way for where the credits should have been. Besides that there are also trailers for upcoming and past releases from FUNimation. Unfortunately there are no other on-disc bonuses which are a bit of a detriment to the release considering this is the complete series in one package with no extra bonuses whatsoever. 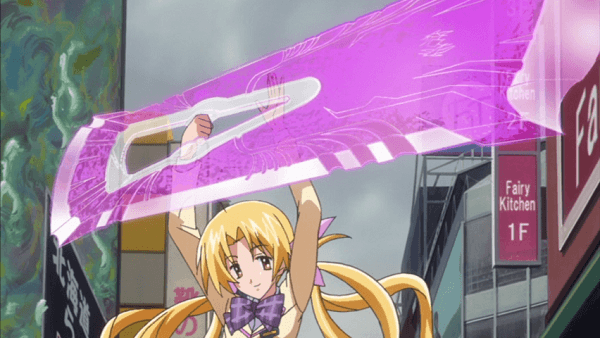 Overall:
While Chaos;Head may have quite a lineage behind itself, unfortunately the anime adaptation has quite a number of flaws that hold it back from being great. The quality of the animation as a whole dips too often for comfort despite high points whenever a Di-Sword is concerned and has quite a confusing storyline that jumps around too much and leaves multiple plot holes that can simply leave viewers wondering about multiple things.

If anything, the short number of episodes is a huge detriment to the title as it feels like most of the storyline was rushed and bunched together into an unfocused mess that doesn’t explore the potential that the series has with its plot. Still, FUNimation has done an amazing job with the dubwork and Chaos;Head is a unique enough anime it could warrant attention as there aren’t many series out there like it, if only things didn’t seem so rushed and underdeveloped.