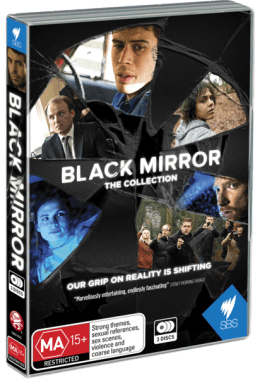 Black Mirror is a British television series that casts an eye over the influence of technology in our lives. It is an SBS Home Release that brings together two episodes from Season 1 (the third is missing due to music clearance issues) and the entirety of Season 2. Creator Charlie Brooker (Dead Set) has said that if technology is a drug, then Black Mirror is a look at its side effects.

The Black Mirror of the title is every screen that has come to dominate our lives in the digital age – that of smartphone, television, and computer. Every facet of our digital existence comes up for examination over the course of five episodes. Each is set in a slightly different version of the present or the near future and features a stand alone story and characters. The show has seen two critically acclaimed seasons, winning an International Emmy and having one of it’s episodes – The Entire History of You – optioned by Robert Downey Jr’s production company for a full movie treatment. 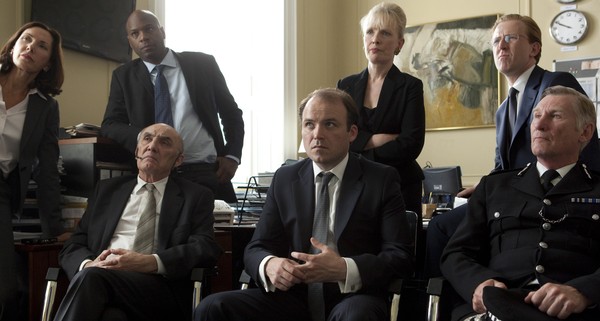 The first episode of Black Mirror comes out of nowhere and grabs you by the throat. The National Anthem opens with a phone call that wakes the Prime Minister of the UK in the middle of the night. The young, popular Princess Susannah has been kidnapped, and to secure her release the ransom demands that the Prime Minister has sex with a pig on live national television.

From there things snowball, dragging the viewer on a journey that is brilliantly paced; horrific, funny, sickening, and engrossing. The Black Mirror theme is prominent – the video ransom note is uploaded to YouTube and goes viral before it can be suppressed,  the public responds on Twitter, and everyone has a device in their hand at all times. It’s edge of your seat stuff until the very end, and is so effective because it is horrifyingly plausible. The viewer is forced to examine the ugly face of a world who’s moral boundaries and norms have been obliterated by the internet.

The Entire History of You takes a step into a near future where everyone is implanted with a memory recording, playback, and editing device called a Grain. The story has a more intimate scale, focusing on a young married couple and the emotional fallout of an awkward dinner party. The episode explores the consequences a device such as a Grain would have on many aspects of life – employment, relationships, identity theft, sex, and it’s all very cleverly done. 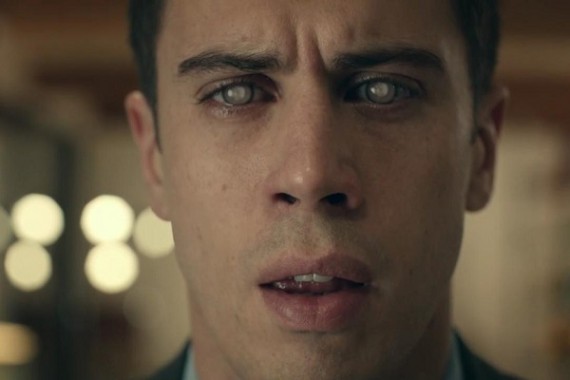 It isn’t as electric as The National Anthem, relying on a relationship dynamic instead of a rapidly developing plot.  Whilst the characters are believable and well acted they aren’t entirely sympathetic.  Fortunately the concept of the Grain is strong enough to carry the episode and make it another solid piece of social commentary. It is all too easy to see people’s real life addiction to Facebook morph into something like this with Google Glass just around the corner.

Season 2 has a more emotional opening act, Be Right Back. Young couple Martha and Ash move to a new home in the country. Martha is then left devastated when Ash dies in an accident. At his wake Martha is told about a new service that might help her grieve, and is reluctantly signed up to an online tool that gathers all the information a person has ever posted online and collates into a functioning personality. Martha is repelled by the virtual Ash at first, but after making a life changing discovery she is compelled to engage with him.

Whilst the idea  of digital resurrection is provocative it is Martha’s emotional journey that is the focus of the episode, much to its strength. Anyone who has ever lost a loved one will be familiar with the beats of the grieving process that Martha goes through, and whilst it doesn’t sustain that hook through to the end it is still a thought provoking episode. 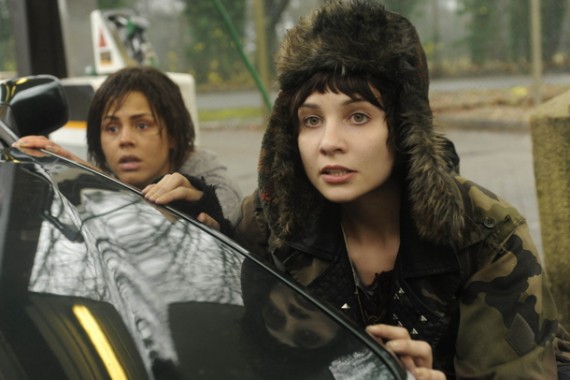 White Bear is an entirely different journey. A woman wakes up surrounded by pills and bandages on her wrists,  with no memory of who she is. The TV next to her shows nothing but a strange symbol. Outside the  house the few people she can find refuse to communicate with her, instead filming everything she does on their phones. After fleeing a man who tries to kill her, she runs into another woman – the only person she has met so far who seems normal. She explains that 90% of the population have been brainwashed by the signal on the television, and do nothing but film what they see on their phones. Others who have been unaffected have taken advantage of the newly lawless society and roam the streets hunting people for the entertainment of the watchers.

Initially White Bear is a little hard to take seriously, but evolves beyond the skepticism to deliver one of Black Mirror’s best episodes.

Politics gets a turn in the final episode of Season 2 – The Waldo Moment. Jamie is a comedian who voices cartoon bear Waldo on a crass comedy talk show. After doggedly pursuing and mocking a candidate in the local by-election, Waldo himself is put up for election by producers keen to exploit the character. Jamie, always reluctant about his work as a trash talking bear, is forced to play along in a political campaign that continues to gather momentum as people flock to Waldo’s anti-establishment attitude.

The episode plays into well established opinion about politicians and the games that they play, giving it a fresh spin for the age of social media. Jamie’s ups and downs as he tries to come to terms with his new role are not as dramatic as some of the character arcs of previous episodes, but Waldo is more comedic an episode than some of its pitch black brethren. 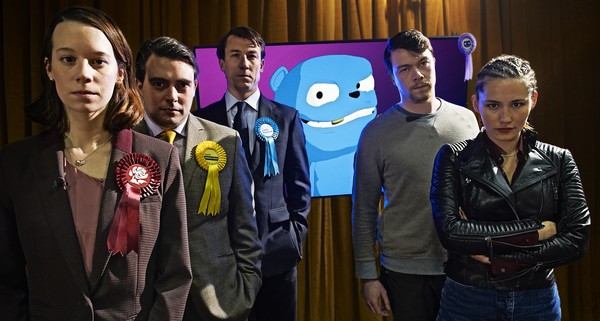 Every episode of Black Mirror is constructed around a convincing world. No matter what vision of the future it visits there are always plenty of details – both big and small – that ensure complete immersion. Things are kept simple with little in the way of flashy techniques, allowing lighting to set the tone and making sparse use of music. That simplicity extends to the design of some of the future tech that appears in the episodes, which nudge viewers into a future that seems entirely possible – laptops with gesture control, subtly futuristic mobile phones and the way people’s eyes change when they use their Grain implant. Nothing ever seems stupid or outrageous, instead coming off as genuine possibilities if we were to pursue our current technology to the extreme.

Black Mirror : The Collection is an excellent series. It is thought provoking without being glum or sanctimonious, and never pushes a particular agenda on its audience. Every episode has something interesting to say or something shocking to reveal, and given the wide breadth of topics it covers there is going to be something here for anyone who has embraced the digital age. The National Anthem and White Bear are particular stand outs, but every episode will make you think, make you talk, make you share. It is a show that holds up a mirror to society and dares to show an ugly reflection. Watch it.