It’s another day, and there’s another physics-based platformer out on the iOS platforms. Bitter Sam involves dropping a surly creature named Sam through over one hundred levels to serve in the twisted experiments of a lab scientist. Is the game’s attitude enough to differentiate Sam’s adventure from the plethora of other options out there, or will it just leave a bitter taste in your mouth? 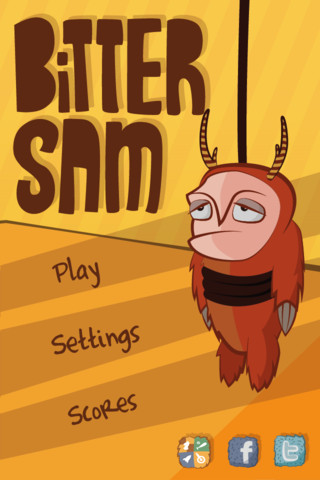 Sam is a bitter guy, and it’s not hard to imagine why. Being kidnapped by a scientist and forced through descents into various dangerous environments isn’t exactly anyone’s idea of fun.

But if he’s to survive, it’s up to you to guide him safely through the game’s levels so he can live to be grumpy another day. Bitter Sam uses simple tilt-based controls. As Sam ropes down each level, you’ll tilt your device left or right to lean him one direction or the other, avoiding spiked bars and saws that can cut his rope until he reaches the end of the stage. There are also power-ups to pick up along the way: Sam can use pigs as objects to destroy obstacles and avoid damage, and he can also pick up blue rope, which will temporarily prevent his rope from being shredded by those pesky saws. 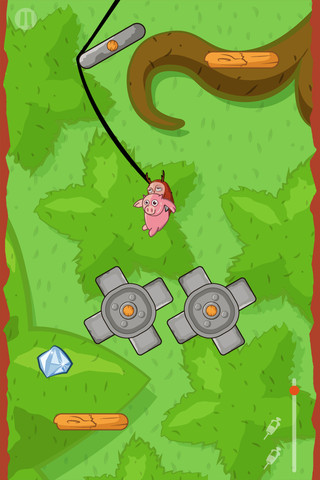 There’s a crystal included on each level, and unlocking further “worlds” (there are five worlds, each with twenty levels) requires that you collect a certain number of these. Some of these are really easy to get, while others require a good deal of level memorization and perfect timing. It’s just difficult enough that unlocking new worlds is a challenge, but you’ll never throw your phone at the wall in frustration. If one level’s crystal is too hard to get, chances are that the next one will be simpler to get.

Despite its polish and responsive controls, Bitter Sam‘s main fault is its simplicity. Between the tower-climbing games, descent games, and physics-based platformers that have come before, the game really fails to bring anything new to the table and it does begin to get a little repetitive. The level design is intelligent enough for this never to become frustrating, but you’ll find it hard to play for extended periods of time. That being said, if you’re looking for something to fill five minutes, Bitter Sam provides a fun experience that has a level of polish to match, a rarity in the world of rehashed, copycat applications.

Bitter Sam really shines in its presentation. Not because it’s the most beautiful game out there or because it has a breadth of voice acting, but because the way it presents Sam’s attitude in the way he looks, moves, and sounds as he descends down the game’s levels is remarkably endearing in a fashion that’s almost sadistic. 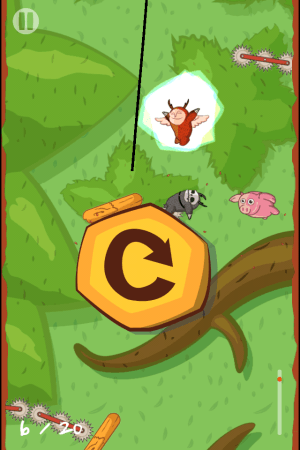 When Sam bumps into a level’s walls, the way he’s animated and the satisfying “thud” make it almost fun to shove him into them. When Sam dies, he finally smiles, the horrors of his sad life all over, as his soul rises upwards. And all of this is backed with a merry tune that’s a bit more creative than the bog-standard that’s arisen in other cartoon platformers. In essence, when the game uses outstanding art and audio design to make even dying fun, you know it’s doing something right.

Bitter Sam is a game whose attitude sets it apart from similar titles. While you may find other physics-based platformers with controls as intuitive as the ones in this app, no other game I have encountered on iOS has made dying such a pleasure. Sadism aside, because of the clever level design, every death feels like a lesson you can learn from, and the stages are short enough starting back at the beginning feels like only a small setback. Despite this, you may get a little tired of Sam over the hundred levels of the game, so I advise taking it slow. In bite-sized chunks, Bitter Sam will win you over with its charm and simplicity.