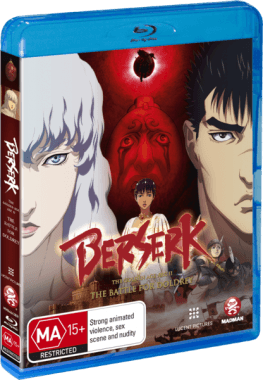 Much like what is being done with the “Rebuild Of Evangelion” movie series it seems as though the veteran Anime/Manga Berserk is also being remade into a line of high-action, beautifully animated films that will bring the old story into the new generation in a way that only movie remakes seem to be able to do. As part of the Reel Anime 2013 set of screenings, Berserk: The Golden Age Arc 2 – The Battle For Doldrey is the most recent, Western-released, film in the new “Golden Age Arc” of movies. It is an incredibly straight-forward film that really leaves nothing to the imagination and it is highly obvious that it is for an older audience. I was given the Blu-Ray version of this movie to review and, while it seemed to lack certain things, it was a great pleasure viewing it. Read on to see my full thoughts on this release.

I want to start off by just outlining the fact that I have NOT seen Berserk: The Golden Age Arc 1 which, now that I’ve seen this one, I will definitely seek out and watch. The point of me outlining that fact is that it seems as though this movie is directly connected to it’s predecessor, that’s obvious, and while there is a large gap of years between the events of the first and this film it is still obvious that one must watch it from the very beginning so as to understand more of the story and of the ways that characters interact because, without that previous knowledge, it is a little hard to settle in. Because this movie is in a line of movies that intend to cover a great deal of the series’ stories I really can’t get into a lot considering the impact of these movies becomes heavier if they’re all watched in sequence, as a person who hasn’t done this it is, once again, very obvious.

The story follows Griffith, Guts and The Band of Hawks who are a team of highly trained soldiers that work under the lead of Griffith and the command of Guts, both of which seem to be of great importance to the series. Guts WAS an incredibly skilled mercenary but it seems as though Griffith has employed him to work with The Band of Hawks because of his combat prowess and incredible power on the battlefield. This movie focuses on the taking of a mighty castle, Doldrey, and how it is up to The Band of Hawks to do what has not been done for hundreds of years; overcome the castle of Doldrey’s forces and make it their own. This seems like a basic description of the story but, essentially, this IS the story and I don’t think it needed to be any more than it was. The film ends on a cliffhanger, an extremely erotic (watch the movie) and brutal cliffhanger that, as a long-time fan of Anime, I can see leading into something epic and extraordinary.

What I enjoyed about the story was that there wasn’t a great deal of dialogue and there wasn’t a great deal of overly-descriptive explanation by characters yet I understood what was going on the whole time which I think is really good for a medium like film. Characters didn’t seem to have much depth to them, characters apart from the main three or so, and that was a little bit disappointing yet this movie was extremely action-driven and a lot of that character development could possibly have been placed in the first iteration of the movie series so I can’t exactly fault it. The pacing seems a little odd for a film but, once again, when it is set out to be a series of films all leading fro one to another I can’t fault it too hard because audiences will go into this movie knowing exactly what to expect. Possibly my favourite aspect of this story was that it centred around a war that WASN’T taking place in the Edo Period of Japan. It was extremely European and so full of action and consequence that I couldn’t help but enjoy it. It’s supernatural undertones, which only popped up briefly, were a nice touch because I feel like they will be brought to the forefront sometime in the series.

The animation was absolutely fantastic yet it’s use of CGI I found to be overused and fairly unnecessary. All of the battle scenes and all of the background character were CGI animated which makes sense for a lot of movies or series’ out there but I loved the traditional animation so much in this movie that I almost yearned for it during the times where it wasn’t present. I just found that the traditional animation was so smooth and fluid that it really could have been done for the entire movie. I understand that it is incredibly hard to animate large numbers of people in combat yet we’ve seen series’ like Sengoku Basara do this extremely well and it continuously lead me to thinking that this movie would have been so much better had every scene been done traditionally and not just the idol scenes. It just took some of the appeal away from me. The environments were spectacular and incredible realistic, you really good a good feeling of how dense a forest is or how open et claustrophobic a baron battlefield filled with armies can be. Characters looked fantastic and, although I know nothing of the time it was based around, I feel like costumes were fairly accurate to the era.

First of all; the English voice acting was great, there were no annoying voices, there were no anti-climactic speeches or dialogue and when a character screamed or felt pain you really felt it yourself. They did an incredible thing during a fight scene where the character’s inner dialogue could be heard as crisp as it could always be yet the character’s surroundings were dulled and muffled because that character was close to death, a revelation was made and it cut straight from damp sounds the clear cutting and smashing of bodies and heads on the battlefield. It was an incredible quick transition and it really made an impact on me, it was just the sound yet it felt like time itself slowed right down. The orchestral and medieval music throughout the movie fit it so well and just added to the overall “dated” experience of the story as well as the character’s situation. There was even a small chunk of distorted guitar thrown in during a “fever dream” style of scene close to the end. Very well done.

This movie is done great and I would really recommend it to any mature members of the Anime-watching audience. I’m certain that fans of the original series would absolutely love this release and, while there are no extras, it’s still a purchase for any fan of the series. It has actually made me interested in catching up and watching the first movie and it’s also made me begin anticipating the release of the third movie so if it’s done this to me I can imagine what it would do to a lot of other, more open-minded, fans of Anime out there. This movie can be watched on it’s own but I can imagine that the whole experience will be better suited to someone who has seen it from the very beginning. Once again, it is a  fantastic release despite it lacking certain things that would have made it a perfect release in my eyes.