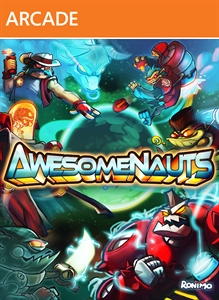 As online gaming becomes more efficient and user friendly on video game consoles and handhelds, more developers are now jumping in to create compelling and addictive online multiplayer gaming experiences. It’s reached a point where single player content often takes a backseat to a well-designed multiplayer mode in order to ensure that gamers hold on to the game for a very long time.

Independent developers have also jumped in on this opportunity by offering online intensive gaming experiences for a modest sum. The recent digital FPS download title Nexius is a good example. More recently however, an interesting new title by the name of Awesomenauts has appeared on the Xbox Live Marketplace and the PlayStation Network. Awesomenauts is an unique little action game that solely focuses on multiplayer.

Awesomenauts is a 2D action title that’s classified as a Multiplayer Online Battle Arena (MOBA) and the game takes place in the year is 3578, focusing around a battle between a group of hired mercenaries amidst an intergalactic war. 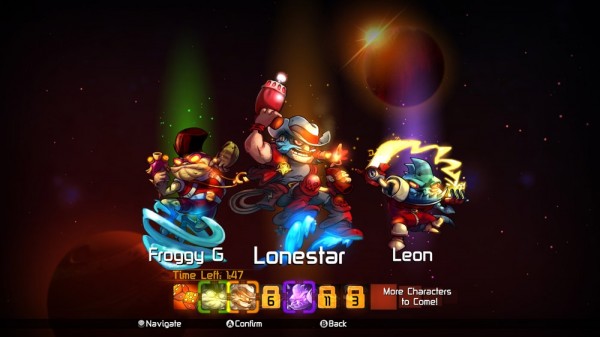 Awesomenauts is a pure 2D sprite-based video game with some 3D effects thrown in. Almost everything is sprite-based, and it looks very nice since it’s all pretty much high resolution 2D with some fluid and consistent cartoon-like animation. The particle effects look nice too and mix well with the 2D look. The art style is pretty cool too, and although the character designs are nothing unique or special, they still have comic book style and personality to them. The backgrounds however, are a bit simplistic in nature and don’t have much artistic flair to them. There is nothing to write home about in terms of the game’s audio. It’s pretty much serviceable as the explosive sound effects and tunes compliment the crazy action-packed sci-fi nature of the game. 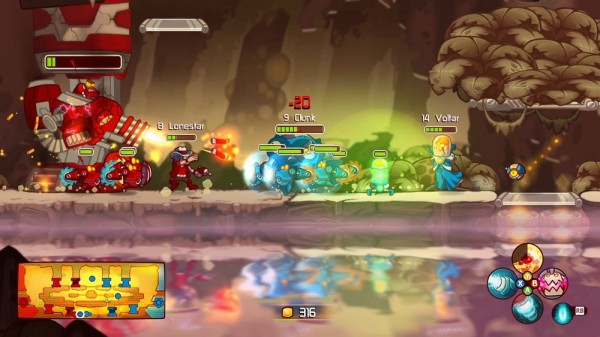 When you first start playing Awesomenauts, the game opens up with what seems like a story-based mission. It has an intro where this space cowboy is sent by his alien employer to destroy an enemy base. You quickly realise that the mission is nothing but a tutorial to simply run you through the basics and get you prepared to what the game is solely about…the multiplayer.

Awesomenauts is a Multiplayer Online Battle Arena game where two teams of mercenaries battle it out, and to win a team must destroy the opposing team’s ‘drillcore’. So in a way, it’s like a tower defense game with heavy emphasis on 2D action.

Players can chose between one of six mercenaries, and work with other human players as a team against others. Each mercenary offers a unique 2D action experience, with their own set of abilities and vast number of upgrades. There are more characters to be added to the game in the future but for now the selection is good enough. The characters range from a space cowboy who handles a lot like Megaman, and this lizard like alien who uses close range combat techniques. 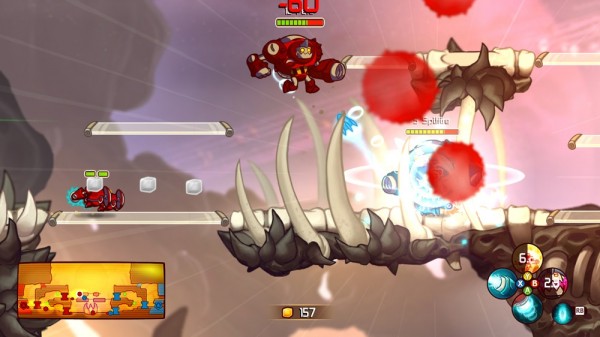 You work with other human players and at times A.I bots in frantic battles that also include weapons like battle droids and turrets. You also collect coins with which you can purchase numerous new upgrades and weapons for your character from the store during battle. The game can get very strategic, as it requires careful use of each character’s play style and working well with your team members to take down the opposing team’s base. As well as careful utitlisation of the droids and turrets, and even use the layout of the map to your advantage.

The mechanics actually work really well, and it essentially feels like a 2D action platformer in a somewhat similar vein to the Megaman games, but of course the focus is one team based combat instead of actual action platforming, although the general feel of that genre is present.

The online functionality works really well, allowing up to six players to play against each other in teams of three. At this stage it’s very easy to find the right number of human players for an online session, and it allows players to basically drop in and out of a battle at any time. The game also supports local multiplayer.

While the multiplayer mode is a lot of fun, it’s still a case of where it’s forcing players to just play online and nothing else. It makes the game feel rather limited and some more content would have helped in familiarising players with the wealth of weapons and upgrades that this game has on offer, before forcing them to jump straight to online multiplayer. 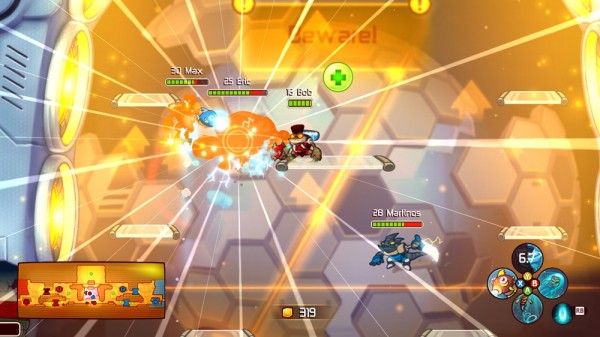 Awesomenauts is really good at what it does, and offers a surprisingly deep and strategic team -based gameplay that makes interesting use of traditional 2D action platformer mechanics and conventions. The variety in characters and their play style, as well as the wealth of un-lockable skills and upgrades for each, makes it a very enjoyable experience. That being said, it would have been great if more single player content was added to benefit from these mechanics and features. As is the case with most multiplayer-only titles, Awesomenauts survival is contingent upon a consistently active community, and one can hope that this unique multiplayer title can reel players in with enough content and community support to keep them hooked.