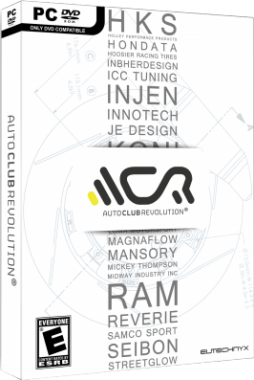 Overview
One of my favorite racing simulations happens to be Gran Turismo 2. Starting from the ground up, you were forced into races that you could not dare to win separating the weak-minded from the determined few. This difficulty propelled endless tiring hours of dedicated gameplay to achieve success through tuning up lower horsepower vehicles. Not only that but in certain races, you could win a new model for your garage. Auto Club Revolution manages to emanate some of these features, but to what extent?

Gameplay
Racing controls are fairly standard with players using the (W,S,A,D) as: accelerate, brake/reverse, steer left, and steer right. The (spacebar) is considered the manual brake offering a powerslide or drift in accordance with the player’s velocity. As with other racing titles, the vehicle camera can be altered to several views showcasing two third person views and as well as first person alternates by clicking the “C” key. 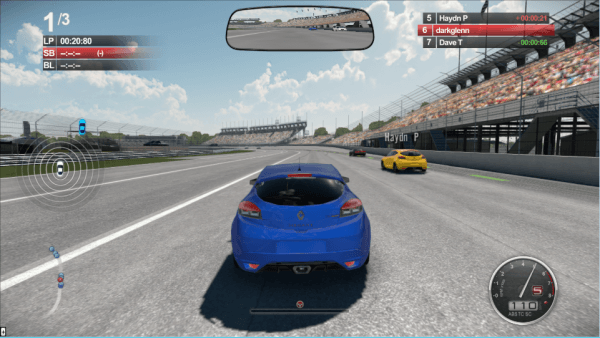 Being a “Free to Play” title, Auto Club Revolution contains purchasable content from the get-go. Players can literally purchase their success by snatching up the best vehicles and upgrade them with real money. Having the highest tiered cars available at the initial log-in can truly deter one’s playing experience – difference between earning and acquiring. Purchasable success provides an uneven market giving this racing simulation an undesirable attribute. For those that have extra cash and want to put money into Auto Club Revolution, there is still an aspect of level grinding, but winning races with high tiered cars will propel that.

A factor that plays in against those purchasing high tiered cars is the implementation of VPR “vehicle performance rating” restrictions in multiplayer races. As your car’s VPR increases, the performance output becomes much greater in terms of acceleration, top speed, breaking, handling, and cornering. The restriction entails that there be a minimum and maximum VPR for a race leaving overpowered or lower VPR vehicles out of the runnings. A 20+/- differential can mean a win or a loss, but this is where player expertise comes into play. Vehicles with a higher top speed will excel on straightaways, but a high acceleration will do wonders on a map trialed with corners. 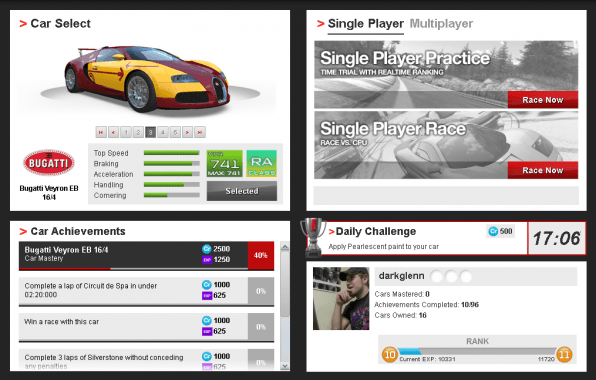 Instead of winning cars after races, Auto Club Revolution incorporates the use of renting vehicles after attaining certain levels. The normal gestation of an activated rental car is 24 hours in your garage. After the time has passed, the car will no longer be available for use unless it becomes purchased. With that being said, players can race with the rental but cannot upgrade nor customize its look during the trial period. Keep in mind that not every new level will unlock a rental car, but they can provide an inside look for what higher rank vehicles feel like. Achievements work normally with a rental car, so try and gain all the extra “credits” and experience while available.

As we have previously established, car models can be purchased though the payment of real money or in-game awarded credits. Real money can be spent on E-Bucks which allows players to buy higher credit items providing convenience. New car class levels will unlock as a player attains ranks and therefore affects what cars can be purchased with in-game credits; however, E-Bucks can be used to purchase high class cars immediately. To put the game’s attrition value into perspective, players will have to spend around 20,000 credits for a class D car purchase. Faster cars can become quite costly when players only gain a minimum of 300 credits per race. The prestige cars can cost from 725 – 2,000 E-Bucks, and for only $5.99 you can attain 1,175 E-Bucks. Though you will certainly not need to race 60+ games to reach 20,000 credits, the seed has been planted in understanding the concept of “free to play” vs. “pay to win”. Achievements for each individual car can reward players upwards of 2,500 credits for completing objectives during races, slightly diminishing the heavy grind for the free to play gamers. 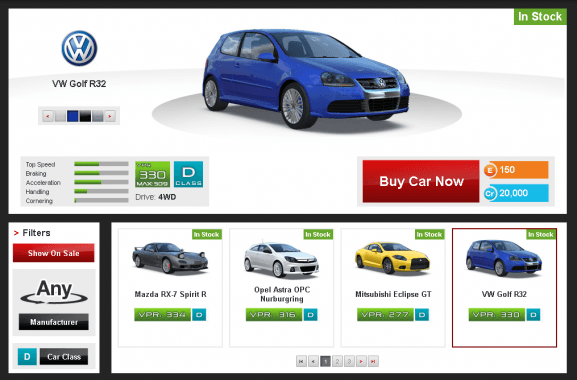 With E-Bucks players can purchase items called “perks”. Perks can increase the returning yield of experience and.or credits earned during races. Some perks will allow you to gain 100% more experience in 24 hours or even for a stretch of 7 days. The gap has just increased for those that pay or just play.

Customization is one of the most highly regarded features and is necessary for the title’s continual improvement. Players are able to take advantage of coloring/detailing their car at no cost with basic kits. A basic color palette is given as part of the natural appeal that the vehicle has, but the more palettes can be acquired through E-Bucks or credit purchases. Additional features through detailing are also available like comical art, country flags, and even custom tire wheels. To further include the idea of customized racing, cars can be upgraded according to individual parts of the vehicle – like Gran Turismo 2. The only lacking characteristic is that the upgrading portion is fairly generic across the board for each vehicle. 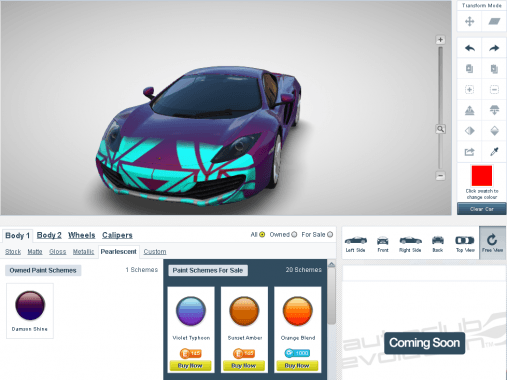 A negative outlook in customization in regards to detailing, a player must completely exit out of the current detailed section before moving to another side of the vehicle. Auto Club Revolution should take note from titles like Midnight Club or Need for Speed who make this process more fluid and enjoyable. Any ounce of repetition or extra steps should be eliminated to make customization more enjoyable.

Auto Club Revolution encompasses many mechanics dealing with physics. One aspect that may seem faulty at times is the the minimal loss of speed when colliding with a wall or buffer. Some collisions reduce the speed by a mere 20 mph when the vehicle clearly connects with a physical object. However, the physics truly come into play when cars collide with one another. Depending on the user’s handling prowess and sometimes pure luck, a wreck can be devastating and/or advantageous for competitors.

During races players can enable penalties. Penalties encapsulate a player’s abilities to stay on the track (cutting corners) and to avoid wall collisions. When penalties are enabled, players who fail to avoid walls or keep to the track will receive added time to their given lap time or have the lap time excluded from fastest lap leaderboards. Thankfully, you can choose not to have these annoying penalties on. Some people just need to crash into walls!

Audio/Visuals
The correlation between actual sounds and visual expectancy is a bit deceiving in Auto Club Revolution. Crashing into cars or any object should visibly take a toll on a car’s aesthetics. The audio component matches what players might perceive to be occurring during a collision, yet the visual component lacks a certain reality lacking in most racing simulations. I suppose those that want to see their car turn into mush should play the Burnout series. 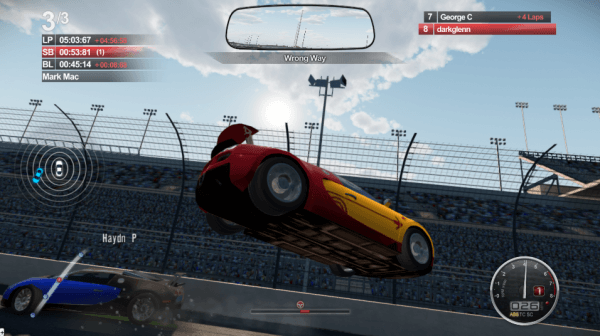 Beyond in-game graphics, the user interface must be taken into consideration. In junction with a web browser, the title does well to accomplish a public forum in displaying an approachable medium. Those new to the title can get started by walking through visual tutorials and find important aspects through the “Help” menu. Easy navigation and offering active learning deliverables are key to make the game appear user friendly.

Overall
Eutechnyx is able to deliver a product – free of charge – to the vast public. Offering a title that is free to play means that the company still needs to acquire revenue in some fashion. In this case, Auto Club Revolution caters more towards players that pay to gain instant access to prestige vehicles. Advances can be made easily by attributing real money for in-game perks and acquiring upgrades for minimal effort. However, this does deter the effectiveness the title will have on those that are strictly free to play. The community is relatively new and thus a growing membership is needed in order to maintain the game’s online persona.

In conclusion, Auto Club Revolution takes what others games have modeled as the typical standards for the genre and incorporated them into a public market. While customization, level grinding, and vehicle acquisitions are at the title’s forefront, the title loses its flavor with easy access purchases. Earning a car carries more weight than using money to purchase it.