SNK has been releasing quite a few of their classic games on Playstation. Athena is one of them. Published in 1986, it has found a new life on the PSN by being released as a Mini. Available on the PS3 and PSP, Athena doesn’t appear to have too many changes from the original version of the game. There is no high definition graphics, enhanced gameplay mechanics or other improvements. 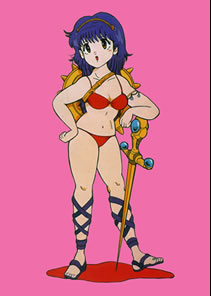 The gameplay centers around basic platforming, combat and collecting. As Athena falls from the heavens to the earth below, she loses all her clothes (yea, don’t get too excited. Its still 1986 graphics.) After you reach solid ground, Athena must kick the enemies that try to kill her. After awhile, you’ll find some weapons, and then you will begin finding her armor that bestow different abilities to her. If you get hit, her armor begins to shed in addition to her health bar. 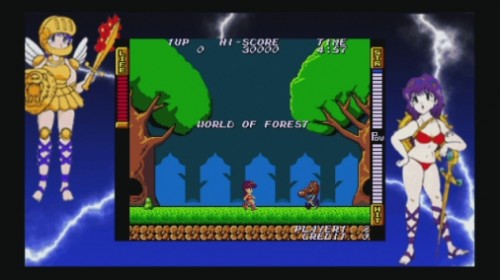 Platforming is quite fun, and there are multiple floors of the environment that you can explore. Each floor has different enemies and requires different strategies to beat, very much like Sonic or other games in the platforming genre.

The biggest problem with this game is that the mechanics and difficulty are, to put it kindly, outdated. Fans of retro games will have a blast with this game, and they will love being able to take it with them on the PSP or play it at home on on the PS3, especially for such a low price. Most gamers will have more fun reliving their memories of playing the game though, as the controls and basic gameplay are floaty and unreliable. For example, hit detection is awful. When I would swing my sword multiple times, it was about a 50/50 chance that I would actually take down the enemy. No matter how many times I tried, I was only able to get about ½ way through the 1st level, even after I turned the difficulty to easy and put CONTINUES on. Part of that may be that old school games are not my forte, but a lot of the reason I had trouble with this game comes down to one simple fact: This game was designed to be a quarter eater, and nothing has changed about that in this port of the game, even though there are no quarters involved. That being said, I was very impressed with the level of detail in the game, especially given that this was a game that was produced before I was born. It was very interesting to see where modern games have come from and how game design has evolved. For instance, collecting pieces of armor and the like reminded me of collecting different armor add-ons in Shadow Complex. 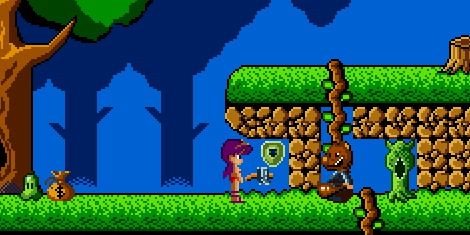 Overall, if your desperately bored and need a cheap game, you could do worse than this game. However, I would recommend Castle Crashers or Shadow Complex to those gamers looking for a 2-D adventure game. Those games capture the feelings of retro platformers, but they add in modern gameplay mechanics and HD graphics. Perhaps if SNK releases a HD remake of Athena, I would be be more impressed, but as it stands, this game will likely only appeal to those gamers old enough to remember playing the original in the arcade or those who like an extreme video game challenge.